It’s easy to imagine a big grin spreading across the face of Sergio Perez as Lewis Hamilton’s Mercedes-AMG sailed straight on up the Turn 1 escape road at the restart in Baku. In a few seconds, the Mexican’s victory hopes slipped away thanks to Hamilton’s superior bolt from the grid – then immediately slopped back into his lap thanks to the seven-time world champion’s uncharacteristic finger trouble with his brake-bias ‘magic button’.

As Perez faced an empty road on the run to Turn 2, all he now had to worry about was the brooding cloud of his Red Bull RB16B’s fading hydraulic pressure, which had fallen to critical levels. He just managed to complete the two-lap mini race and with victory secured he was ordered on the team radio, with clear urgency, to pull over.

Yes, ‘Checo’s’ second career grand prix victory, and a first for Red Bull in just his sixth race for the team, had come to him thanks to team-mate Max Verstappen’s Pirelli tyre debacle, then Hamilton’s error – but as Christian Horner said in his high post-race praise, there was much about the Mexican’s performance to talk up: his practice pace, his “phenomenal” speed in the race that made up for qualifying only sixth, and how he kept Hamilton at more than an arm’s length after jumping him in the stops. Perez is now hitting Red Bull’s brief to give the team a competitive second car and he was right where he had to be to pick up Verstappen’s broken pieces. “He’s ahead of expectations,” said Horner.

It took Perez 190 F1 starts before he could win one, at that dramatic Sakhir GP last December. Now, six months later, the second follows and it’s one that lifts him into great company. Along with his Ferrari peer Charles Leclerc, Checo is now level with 10 more two-time winners from history to make it a round dozen: José Froilán González, Maurice Trintignant, Wolfgang von Trips, Jo Siffert, Peter Revson, Patrick Depailler, Jean-Pierre Jabouille, Patrick Tambay, Elio de Angelis and the one that will surely stand out most to Perez himself, Pedro Rodríguez – Mexico’s greatest racing son. Now all Perez needs to rival his predecessor is a deerstalker in place of his Red Bull baseball cap…

As always, comparisons from era to era are troublesome, but there are some cool little parallels and contrasts to consider between Perez and those he has joined in the two-time club. Let’s consider Rodríguez first: he scored his first grand prix win at the 1967 season opener at Kyalami and like Perez, it was inherited from others’ misfortune. But his second win, in 1970, was as far removed from anything Perez could possibly experience: averaging more than 150mph around the old Spa in a V12-powered BRM, passing no less than Jochen Rindt, Jackie Stewart and Chris Amon, to then lead Chris in a thrilling chase to the flag… That one’s surely worth at least three grand prix wins compared to any race today!

On to the others on that two-time list: Gonzalez, twice a winner at Silverstone (1951 and ’54) and a historic first winner for Ferrari. The burly ‘Pampus Bull’ is far removed from Perez and his modern ilk and then some. Then there’s Frenchman Trintignant, with his pencil-slim moustache: like Gonzalez, it’s all too easy to label him a one-circuit specialist given that both his victories came at Monaco (in 1955 and ’58) – but at a push there’s a parallel to Perez in that he hung around for a long time, notching up 80 GP starts between 1950 and ’64, in a career that actually began pre-war, more than a decade before the world championship’s existence. Perez has gone from a midfield Sauber C30 to a cutting-edge Red Bull RB16B; Trintignant went from his late brother’s Bugatti to a BRM P57. Somewhat greater range.

Who else? Poor von Trips, twice a winner in what could have been his championship year in 1961, only for the German to be cut down at Monza along with 14 spectators in F1’s worst accident; Siffert, who waited seven seasons for his unforgettable breakthrough at the British GP in 1968, a (literal) phoenix act for the master of all privateers, Rob Walker, in the wake of the flames that destroyed the patron’s first Lotus 49 in the team’s Dorking premises. ‘Seppi’ won again, for BRM in Austria in the summer of ’71, only to perish at Brands Hatch, scene of his greatest moment three years earlier. The cruel sport.

Revson was another to lose his life before he could win for a third time, the American scoring twice for McLaren in 1973 amidst wet-weather chaos at Silverstone and Mosport, then died testing for Shadow at Kyalami following suspected suspension failure. Boy, this twin-win club Perez has joined sure has its dark side…

Depailler’s next and he’s another whose tally was frozen by tragedy, the popular Frenchman crashing to his death while testing for Alfa Romeo at Hockenheim. He’d won Monaco for Tyrrell and in Spain for Ligier, then lost a chunk of 1979 to leg injuries sustained in a hang-gliding crash. Some drivers back then… they never seemed likely to grow old.

Frenchmen Jabouille and Tambay could and perhaps should have won more. The former became Renault’s first GP winner in ’79 at Dijon, a victory too easily overlooked in the wake of his team-mate Rene Arnoux’s wonder-duel with Gilles Villeneuve. A fine win at the Osterreichring in ’80 shouldn’t have been Jabouille’s last – but leg injuries sustained in a Montréal shunt caused by suspension failure put the hard-stop on his F1 career. 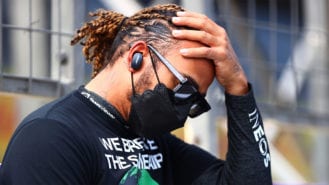 How the sound of radio silence betrayed Hamilton's emotions in Baku

Lewis Hamilton said surprisingly little to his team after his big Baku error, and Merc had few words of comfort either – are cracks starting to show at Mercedes?

As for Tambay, a gentleman and highly popular paddock figure – not unlike Perez – he stepped up valiantly after the death of his friend Villeneuve and Didier Pironi’s career-ending practice accident at Hockenheim, to pick up and carry broken Ferrari. But it’s the second win, at Imola in front of the Tifosi in ’83, that cemented his cult hero status.

And then there is de Angelis. The Roman with the looks of a young Marlon Brando was a firm paddock favourite through the 1980s during six seasons for Lotus. His breakthrough, at the Osterreichring, was an F1 nail-biter as he hung on in the dash for the line to beat Keke Rosberg’s Williams by 0.050sec – the last Lotus win in Colin Chapman’s lifetime. In contrast, de Angelis’ second was a deflating inheritance following Alain Prost’s disqualification at Imola in ’85, the Professor’s McLaren coming in underweight after running dry once past the flag. Elio died too, in a senseless testing crash at Paul Ricard, on a day when driver safety was paid scandalous lip-service. ‘Better back then?’ Think again.

This column didn’t set out to be mournful – and yet it’s hard to avoid when half of those who have won a grand prix pair died doing what they loved. That’s the trend that tends to emerge when you pick through F1’s back catalogue, and the club’s sad percentages will only rise further if (when?) Leclerc and Perez graduate beyond it.

On current form, Perez has a much greater chance than Leclerc of winning a third grand prix this year given Red Bull’s relative strength to Ferrari. He’s also making the right moves to ensure his lifeline 2021 deal following Aston Martin’s harsh rejection might well turn out to be more than a one-year flash in the pan. Horner’s too savvy to talk up those prospects just six races in. But as the boss himself says, “he just needs to keep doing what he’s doing.”

So welcome to the two-time club, Checo. Don’t linger among its members for too long.