The question wasn’t so much who would be on pole, but by how much. Sebastian Vettel was six tenths clear of rivals after his first run during qualifying’s final phase, then hopped out of his Red Bull to watch the session’s final denouement. It didn’t make for comfortable viewing… but he remained just out of reach to take top spot for the 41st time in his Formula 1 career. 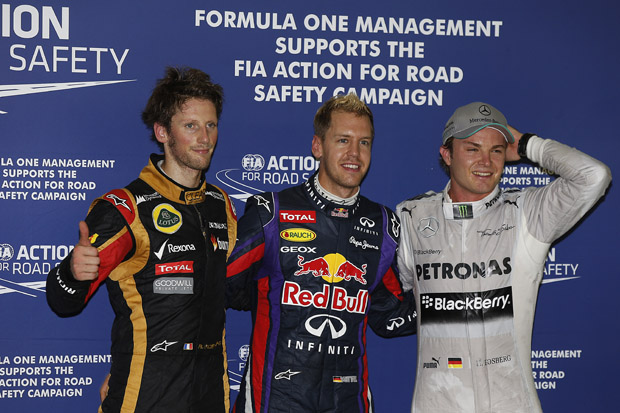 “It’s a weird feeling when you’re in the garage with a couple of minutes to go,” Vettel said, “and not very nice when you see others getting so close but can’t react.”

Mark Webber, Nico Rosberg and Romain Grosjean all turned the timing screen purple (indicative of a fastest sector time) at various moments during their final runs, but the Mercedes driver’s best was ultimately less than a tenth shy and Vettel remained unbeaten. “The car has been phenomenal all weekend,” he said, “and fortunately the final sector of my lap proved to be just strong enough. 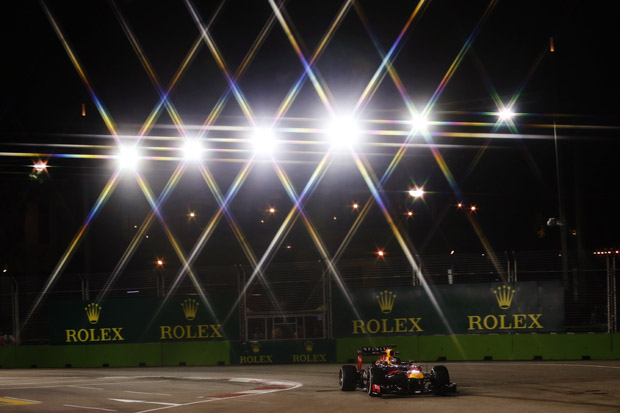 “I’d say this is physically the toughest race of the year – it’s a very long circuit, with so many corners, and the humidity and heat are factors. It feels fantastic, though, when you get a lap right. It hasn’t been on the calendar for long, but already it feels like a classic. You sort of love it and hate it at the same time.”

Rosberg conceded that his deficit would almost certainly have been greater if Vettel had ventured out again, but feels Mercedes will have decent race pace… albeit not on a par with the turn of speed the Red Bulls showed on Friday afternoon. “I like street circuits,” he said, “and have always gone well on them. The car didn’t feel too good yesterday, but we’ve optimised it one step at a time and it was fine in qualifying.”

Grosjean pipped Webber to third and was asked how he felt about news of team-mate Kimi Räikkönen’s impending departure. “Racing with Kimi has never been very… ‘speaky’,” he said. “I’ve always just done my best with my own car.”

He certainly did on this occasion.

Lewis Hamilton starts fifth ahead of the Ferraris – Felipe Massa outqualifying Fernando Alonso for the second straight race – while Jenson Button was eighth in the only McLaren to make Q3. The future of team-mate Sergio Pérez, meanwhile, looks increasingly brittle – and the team hasn’t said much to conceal the fact.

There was brighter news for F1’s second Mexican. Sauber racer Esteban Gutiérrez made his first appearance in Q3, but used up all his super-softs in the process and didn’t run again. He will start 10th, behind Daniel Ricciardo (Toro Rosso). 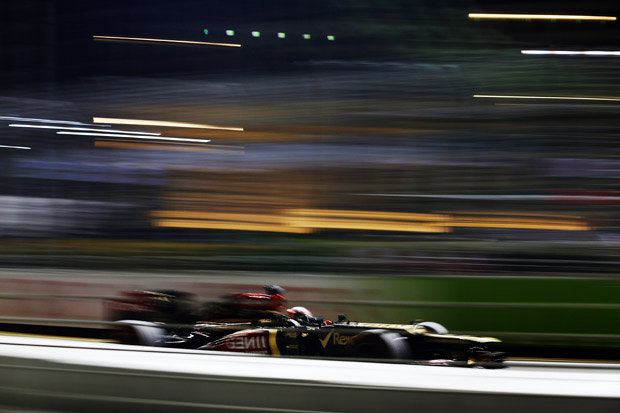 Kimi Räikkönen was knocked out during Q2: the Finn complained about back pains after yesterday’s practice sessions (as opposed to the bank pains he mentioned on Thursday) and his situation hasn’t improved – hardly surprising, given the track’s bumpy nature. There was briefly talk that Lotus reserve Davide Valsecchi might stand in, but in the end Räikkönen was declared sufficiently fit. That stripped the weekend of a little poetic symmetry: it was here one year ago that Valsecchi clinched the GP2 Series title.

The fight to succeed him continues to simmer nicely after this weekend’s opening GP2 race. Jolyon Palmer (Carlin) made a poor start from pole and was swamped into the first corner, but recovered to third before passing series leader Fabio Leimer (Racing Engineering). He then trailed team-mate Felipe Nasr until the mandatory tyre stops… and the Brazilian extended his advantage to more than 13 seconds after Palmer ran a long first stint that eventually took the edge off his Pirellis. The Englishman then looked after his second set of rubber – despite reeling in the leader at two seconds or more per lap – and worked his way ahead as the Brazilian’s tyres (and driving) became increasingly ragged. Palmer subsequently went on to win by more than 13 seconds…

James Calado (ART) completed the podium, ahead of Stéphane Richelmi (DAMS), but Leimer finished fifth – after a slow tyre change – to extend his championship advantage. He has 169 points, but Sam Bird (157), Nasr (148), Stefano Coletti (135) and Calado (134) remain in contention with three races remaining.

It looks a little tighter than the contest in the adjacent paddock.