Alarm sounds at 4am, dawn train to the airport, board the plane while keeping your distance from the hens and the stags, pick up the hire car and by 11.30am you’re at the track.

Welcome back to Europe, Formula 1. It’s so much easier than the long hauls. 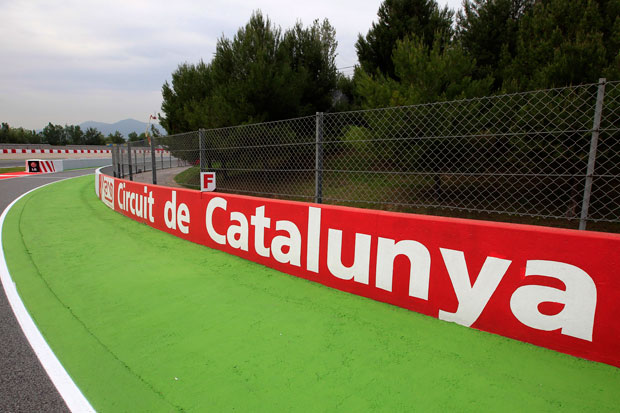 Barcelona is such familiar territory for the Grand Prix travelling circus, given its popularity as a winter test track and its fixture on every F1 calendar since 1991. The team edifices are back (‘motorhome’ as a term hasn’t come close for years), the Spanish crowds congregate in the grandstands even though there is nothing to see, and the drivers they strain to glimpse look relaxed and well rested, after the three-week break since Bahrain.

The only big story on the agenda is James Allison’s departure from Lotus. The technical director who is central to the team’s impressive current form deserves his hot property status. Ferrari is the favourite to land his services, but McLaren has been mentioned and even Mercedes too – although quite why he’d want to join a team that is already top-heavy on the technical management front would be mystifying. The lure of Ferrari makes a lot more sense.

In the round of driver press conferences, Kimi Räikkönen’s was always going to be well attended given the perceived effect Allison’s departure might have on his world title chances. Predictably, he mumbled and shrugged a bit, and that was just about all he had to offer.

In the main FIA press conference, a Portuguese journalist made a valiant attempt to engage Sebastian Vettel and Fernando Alonso in a discussion about the effects of losing a technical director mid-season. They weren’t biting either. 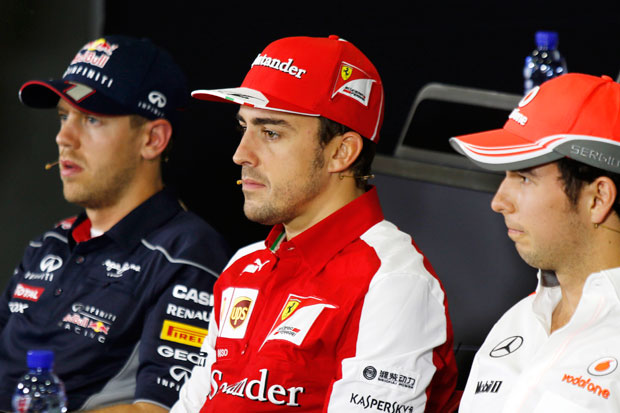 “I heard [the news] yesterday,” said Alonso. “There’s always a reason and probably reasons we don’t know. I don’t think it’s our business. It can be negative, it can be positive.” Yes, thanks for that, Fernando.

Later, Sky’s David Croft had a go, asking Alonso about his previous relationship with Allison when they were at the team in its Renault guise, and whether he’d like to work with him again.

“I don’t really have an opinion on that,” Ferdy batted back. “He will choose what he prefers. He may chose to stay at home. I don’t know. It’s no secret that he’s one of the top men here and we will see what future he has.”

Croft tried again: “would you like to work with him?”

“We are working well and this year things are going much better, so we are happy with what we have, but it’s always welcome, any extra help.

Alonso’s famous for his card tricks. You wouldn’t want to take him on at poker. 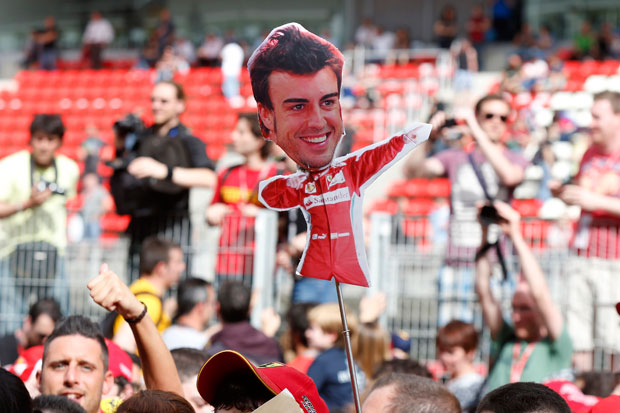 Down at Red Bull, Mark Webber was looking tanned and content with life – which was good to see given his difficult and strained start to the season.

Once we’d got the important stuff out of the way (“what about Fergie, eh?), Webber talked about the ‘prototype’ extra set of tyres that Pirelli will provide teams in Friday free practice. The under-fire supplier wants the teams to run as much as possible tomorrow to gain more information before deciding whether a bigger compound change is required for later in the season, to regain some balance on the high levels of degradation that have changed the face of the sport. It has already tweaked the standard ‘hard’ compound for this race, but Webber doesn’t expect it to make a dramatic difference come Sunday.

“Obviously Pirelli are gaining some data,” he said. “The other hard tyre was a bit of non-event really. It wasn’t the preferred race tyre in Sepang, it wasn’t the preferred tyre in winter testing here. In both conditions, cold in winter testing and scorching hot in Malaysia, it hasn’t really done a huge amount. So they are are trying to improve on that – which probably won’t be too difficult.”

Webber also admitted that he needs a big weekend in Barcelona, to spark his season into life. Questions on the continuing speculation that he might join Porsche in sports car racing next year brought a roll of the eyes. “It’s an interesting category but not one for me at the moment,” he said. “Well I’m not going bag a category out, am I? It’s all right. But my focus is on F1 at the moment.”

Back in 1999, Webber had a huge career break when Mercedes signed him for its assault on Le Mans. Of course, two pre-race flips brought him back down to earth in more ways than one. But apart from the way it ended, had he gained much from his previous taste of endurance racing? 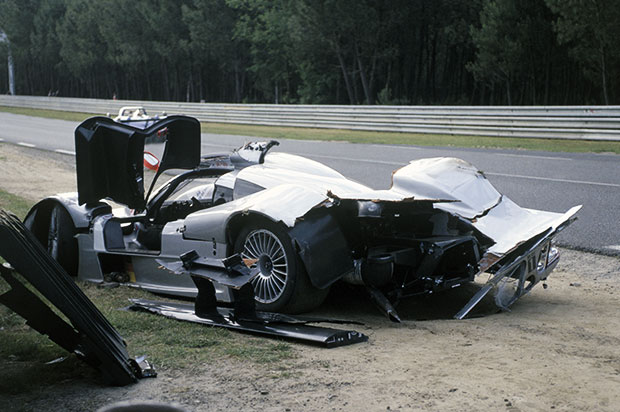 “At that point in my career it was invaluable experience,” he said, keeping his patience as best he could. “We had seven days testing here with Bridgestone in the sports car. At that age it was an absolute dream for me and I was very lucky because I didn’t have a pot to piss in and I was with a manufacturer. It was very good for me, and it worked out well – at that time.”

Back to this weekend, then. “I’m looking for Bahrain to be the low point of my season,” said Mark. “I have a sensational opportunity that starts here. It’s not a re-group, I’ve already got points on the board. But I’ve won at Barcelona, Monaco, Silverstone, Hungary in the past… In terms of circuits, I’ve got good form coming up. I’m looking to get on that middle step again.”

Not the words of a man who’s given up on F1, then.

Over at McLaren, Jenson Button is also hoping for an upturn in form, although his expectations are somewhat lower. In reaction to the team’s disastrous start to the season, McLaren has brought a big package of upgrades to Barcelona.

“It’s difficult to look at numbers and simulations,” said a cautious Button. “We have to reserve judgement until we drive the car this weekend. There’s a lot that’s different that you’ll be able to see, with the aerodynamics of the car and the airflow. It’s still the same colour… but the edges have changed. Hopefully it works. Maybe it won’t all work, but we need to get a better understanding and correlation with [our data] back at the MTC. If we get a good correlation between the circuit and the windtunnel that’s just as important as seeing improved lap time this weekend. 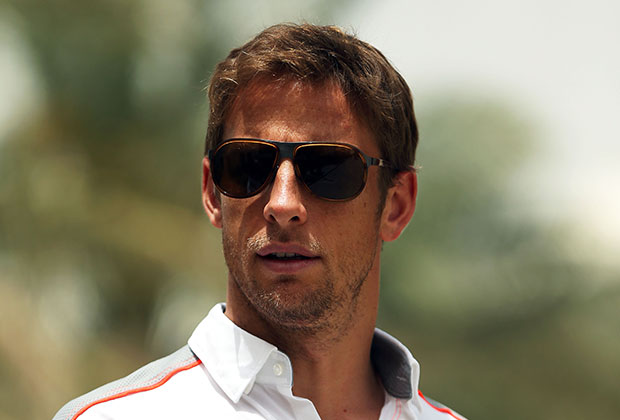 “It looks nice. There’s some really cool-looking bits on the car. I don’t think it’ll be enough to be fighting right at the front, but I think we’ll see an improvement.

“We’re about a second off in Q2. It’s better in the race but it’s not where we want to be. I’m hoping we find a bit more than a tenth in qualifying…

“I’ve been in Q3 in every race so far, which is a surprise. It’s why I was so excited in Bahrain. So a car that can get into Q3 and not be right on the edge of falling out in Q2, that’s a good step forward.”

And what should we expect on Sunday? “It’s quite an unusual race here,” he said. “People are saying it’s the start of the second part of the season, that we’re really going to see where everyone is. I don’t think that’s the case at all. The way the tyres were in winter testing, it’s going to be very high degradation. It’s not going to be hot here this weekend, so it’s not going to be that different to the peak we saw in winter testing. So there will be a lot of degradation and I’m not sure you’re going to see the outright performance of a lot of the cars.”

So business as usual, it seems, as F1 reaches ‘home’ ground.