Mercedes-Benz locked out the front row for the Spanish Grand Prix on Saturday afternoon, as Nico Rosberg took his second pole position in a row and secured the team a qualifying hat-trick. But the expectation in the Barcelona paddock is that for the first time since 1996 the winner of this race will come from the second row or lower on Sunday afternoon. 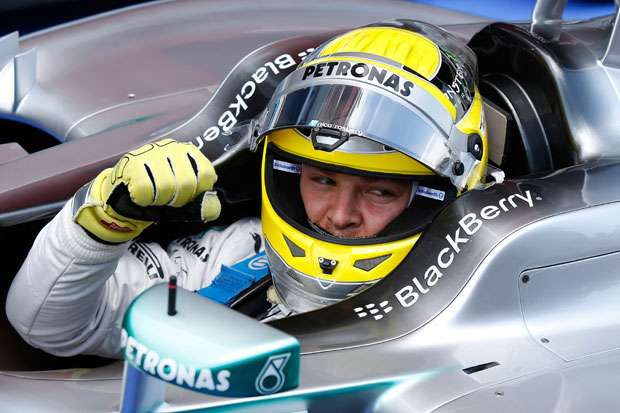 As Simon Arron has reminded us elsewhere on this website, it took a torrential downpour for Michael Schumacher to pull off the feat 17 years ago, scoring his historic first victory for Ferrari with a sublime drive. It won’t necessarily take anything that spectacular, or even abhorrent weather, to decide the order this time. Pirelli’s hard and medium compound tyres could be all that is required to ensure the fastest car over one lap won’t necessarily win in 2013.

But whatever happens tomorrow, no one can begrudge Rosberg’s feelings of satisfaction for another job well done on a Saturday afternoon. Nico’s pole position was emphatic. He set two times good enough to annex the top spot, setting a 1min 20.824sec on his first run. He lowered that mark to 1min 20.718sec on his second, with team-mate Lewis Hamilton flashing across the line nine seconds later with a 1min 20.972sec. Impressive stuff from the Silver Arrows.

But with high tyre degradation once again expected to dominate the race, the pair are only too aware that they’ll have their work cut out to maintain their advantage when it really counts.

“It’s a great feeling to be on pole again,” said Rosberg. “So far this weekend has been very positive and it’s a pleasure to see that the team is improving and fighting through the problems together. However, we know that this is only half of the job completed and have the painful memory of what happened in Bahrain to prove that.

“We’ve worked very hard on our race pace but this track is tough for the tyres, particularly with graining. So it will be a big challenge tomorrow.” 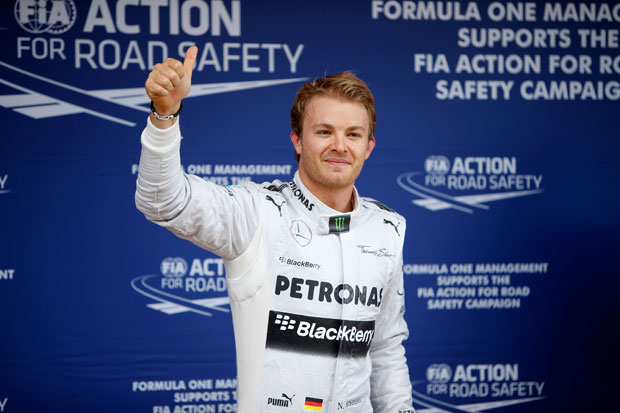 Team principal Ross Brawn was full of praise for his drivers, but pinpointed just how big that challenge will be: “I believe we have the strongest driver pairing in Formula 1 this year and they demonstrated it today. But I don’t think we will be the strongest team in the race. Now we need to get through the first stint, which will certainly be interesting on the option tyre, and then see how our race develops.”

World Championship leader Sebastian Vettel starts third, and from his demeanour in the post-qualifying press conference, he looks confident that a second win on the bounce is on for tomorrow. Although Kimi Räikkönen, starting alongside him for Lotus, could spoil the Red Bull party. 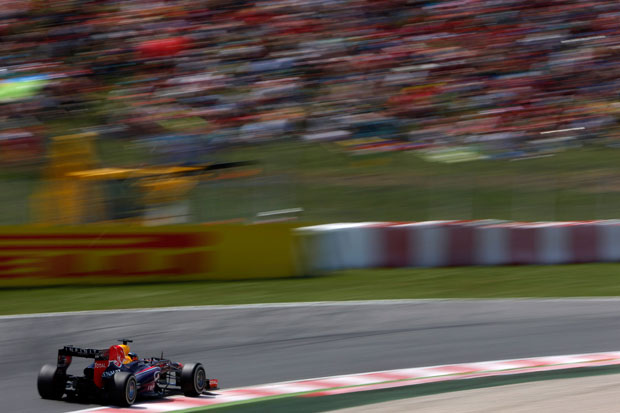 Then there’s home-race hero Fernando Alonso, who will line up fifth alongside the second Lotus of Romain Grosjean. Felipe Massa had qualified just 0.001sec behind his Ferrari team-mate, but was later demoted three places for blocking Mark Webber in the final sector of the lap. From replays on the TV, he was guilty as charged.

Suitably, Massa’s demotion benefits Webber, who moves up to seventh – although he won’t be happy with a lap that was half a second off his team-mate’s best. But Jenson Button’s mood should be worse.

For the first time this season, the Briton failed to make the cut for Q3. Even worse, his team-mate Sergio Perez did. Button will start 14th and Perez eighth for a race at which McLaren had hoped to make significant progress, following the introduction of its upgrade package. The trouble is everyone else has new bits too. Jenson hoped to make Q3 comfortably rather than squeaking through as he had in Bahrain. In Spain, he wasn’t even close, complaining of a lack of grip and high tyre pressures after the session.

Paul di Resta did well to make the top 10, at the expense of the Torro Rosso pairing of Daniel Ricciardo and Jean-Eric Vergne, both of whom have looked strong so far this weekend.

Not so Williams. The team that scored that memorable win here last year couldn’t even make it out of Q1 this time. Last year’s polesitter and race winner Pastor Maldonado will start 17th, one place behind his rookie team-mate Valterri Bottas. Both gained a place from another penalty, this time for Sauber’s Esteban Gutierrez who was judged to have impeded Räikkönen during Q1. 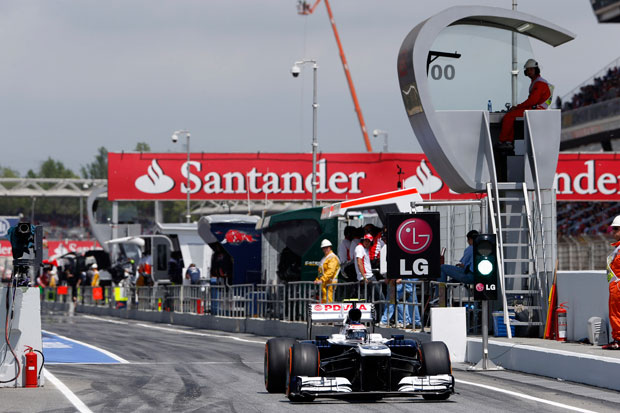