A new feature-length documentary about Steve McQueen will be broadcast on Sky on January 1 and for anyone with even a passing interest in motor racing it should be judged unmissable – even if this time it doesn’t centre around his infamous movie paean, Le Mans.

Instead, Steve McQueen: The Lost Movie focuses on the motor racing flick he nearly made, but didn’t quite pull off. Day of The Champion took its inspiration from Formula 1 rather than sports car racing and would have pre-dated Le Mans by five years, only for McQueen to lose the greatest race of his professional life. A parallel movie, John Frankenheimer’s Grand Prix, starring his friend, neighbour and former co-star James Garner, beat ‘The Cooler King’ to the punch and played a central role in the cancellation of this passion project.

Now, for the first time, rushes from early filming for Day of The Champion have been revealed to take centre stage in The Lost Movie – and the footage is stunning, at least equal to the contemporary F1 scenes captured in Grand Prix and arguably even more sensational.

The new film, which will be shown on Sky Documentaries, is written, produced and directed by Alex Rodger, formerly of Sky F1. But it wouldn’t have been made at all without ace archivist Richard Wiseman stumbling across one of the greatest finds of his prolific career. He was looking for something else when he opened some files he’d been sent from an American stock library, and immediately realised what he was staring at. On the screen were crisp, colour images of the 1965 German Grand Prix captured on 35mm movie film, and some striking car-to-car action featuring Stirling Moss, also filmed on a verdant Nürburgring. This was the never-seen-before opening shoot for McQueen’s movie, even if the star himself hadn’t travelled to Germany and was therefore conspicuous by his absence. 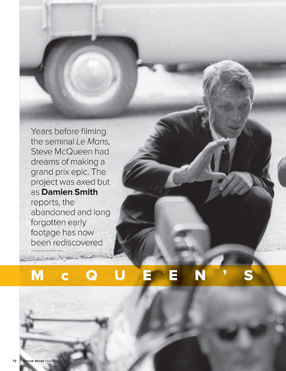 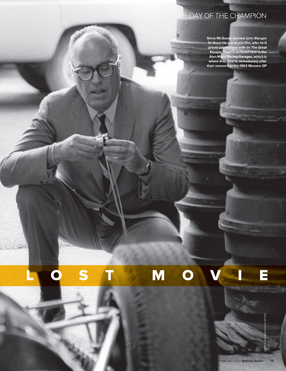 The Lost Movie covers in detail the fascinating backstory behind Day of The Champion, with narration from US talkshow host and paid-up racing enthusiast David Letterman. As it shows with a mix of great archive photos, plus both recent and period interviews, the seed was sown when McQueen spent three months in the UK towards the end of 1961 filming a war movie, The War Lover. It was that film’s locations in and around Hertfordshire and Cambridgeshire that lured the actor to make this black-and-white picture. Why? Because McQueen knew he’d be in the vicinity of windswept Snetterton and the Jim Russell racing school, which is where he’d spend a degree of his down time during the shoot.

John Whitmore took him to Oulton Park for a ‘clubbie’, where McQueen raced an Austin A40

Vibrant British Pathé colour film of Russell’s Formula Juniors is an early treat, as is a fascinating interview with a hirsute McQueen conducted with Anglia TV during filming, in which he discusses his love of motor racing. “It’s a pure thing. Racing is one of the few things in life you can’t fix,” he says to the plummy interviewer the like of which simply doesn’t exist today. “You can’t buy your way out of it. When you are out there by yourself, you are very much by yourself.”

During that time in the UK he also befriended likeminded Mini racer John Whitmore, who hit it off with an actor not yet as famous as he soon would be (this was post-The Magnificent Seven, but pre-The Great Escape. Whitmore took him up to Oulton Park for a ‘clubbie’, where McQueen raced an Austin A40 of all things, then more famously let him have a run in his Mini for a British Saloon Car Championship round at Brands Hatch, in which he came out third best in an entertaining battle with Vic Elford and Christabel Carlisle. Now Lady Christabel Watson, his female rival that day is interviewed in the documentary and recalls McQueen driving her back to London after the race. “He was charming, chatty – had wonderful blue eyes…” she says with a glint in her own. “He behaved extremely well.” 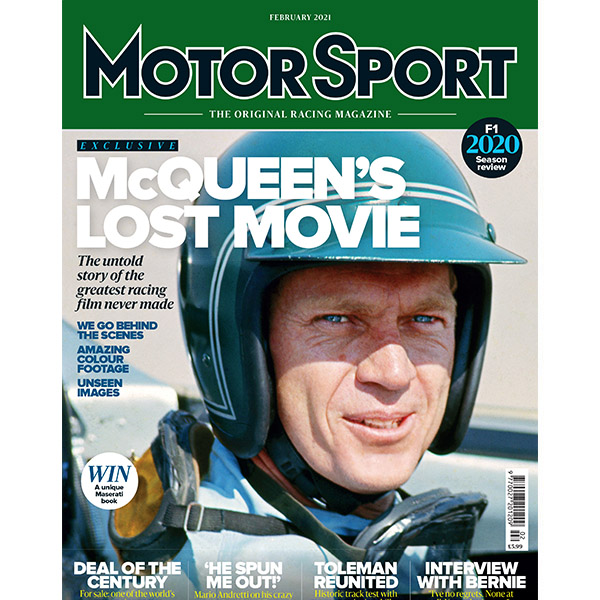 Along with his spell in England, the publication of The Cruel Sport by American journalist Robert Daley a couple of years later solidified his intention to make a movie that would authentically capture the reality of motor racing in the 1960s. The book caused a stir at the time for its somewhat unflinching study of the aspects of racing most enthusiasts and specialist magazines skipped over – and it was perfect fodder for Hollywood. The trouble was McQueen wasn’t alone in recognising that.

He enlisted his friend John Sturges, director of both The Magnificent Seven and The Great Escape, who shared McQueen’s enthusiasm for motor sport – and the great auteur secured what he thought were exclusive rights to make a film for Warner Bros inspired by the book. But as he found out at a fateful Hollywood dinner, where he found himself sat next to a lesser known director called Frankenheimer, MGM was also embarking on an almost identical movie based on the same book… Turns out Frankenheimer had dealt directly with author Daley, while Sturges had gone through his agent. The race was on.

Both film crews began recceing F1, somewhat awkwardly working around each other at the Monaco GP in 1965. McQueen attended that race with Sturges and Moss, who he had enlisted as a consultant to help him on authenticity. The trio then returned to the UK and visited the premises of car preparation specialist Alan Mann, who would take responsibility for the Lola T70 camera car and the other racing machinery needed for filming. Whitmore was also on board as the Sturges crew stole a march on Frankenheimer by heading to the Nürburgring for the first filming, at this early stage with no need of their star. 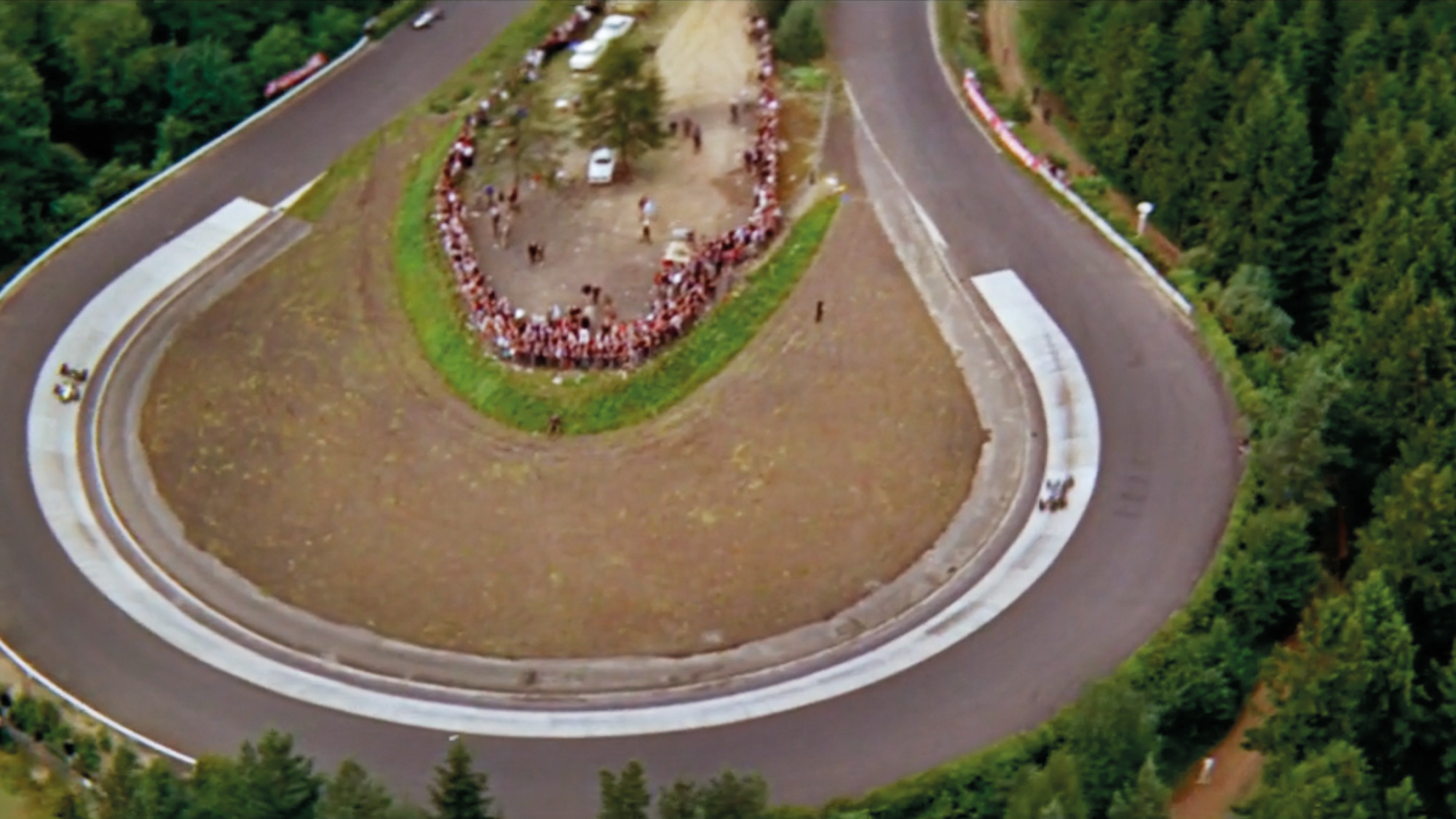 The footage they captured leaves the three familiar talking heads who appear in The Lost Movie, Nigel Roebuck, Simon Taylor and Peter Windsor, stunned when they are shown watching it for the first time. Crowd and pitlane shots draw attention, before action of what is presumably a real practice session taken from a helicopter shows the Nürburgring in all its original glory. Then there’s footage of the immediate aftermath of the race, as winner and newly crowned double world champion Jim Clark takes to the podium, flanked by Graham Hill and Dan Gurney. It’s wonderfully evocative of a time usually only captured in monochrome. 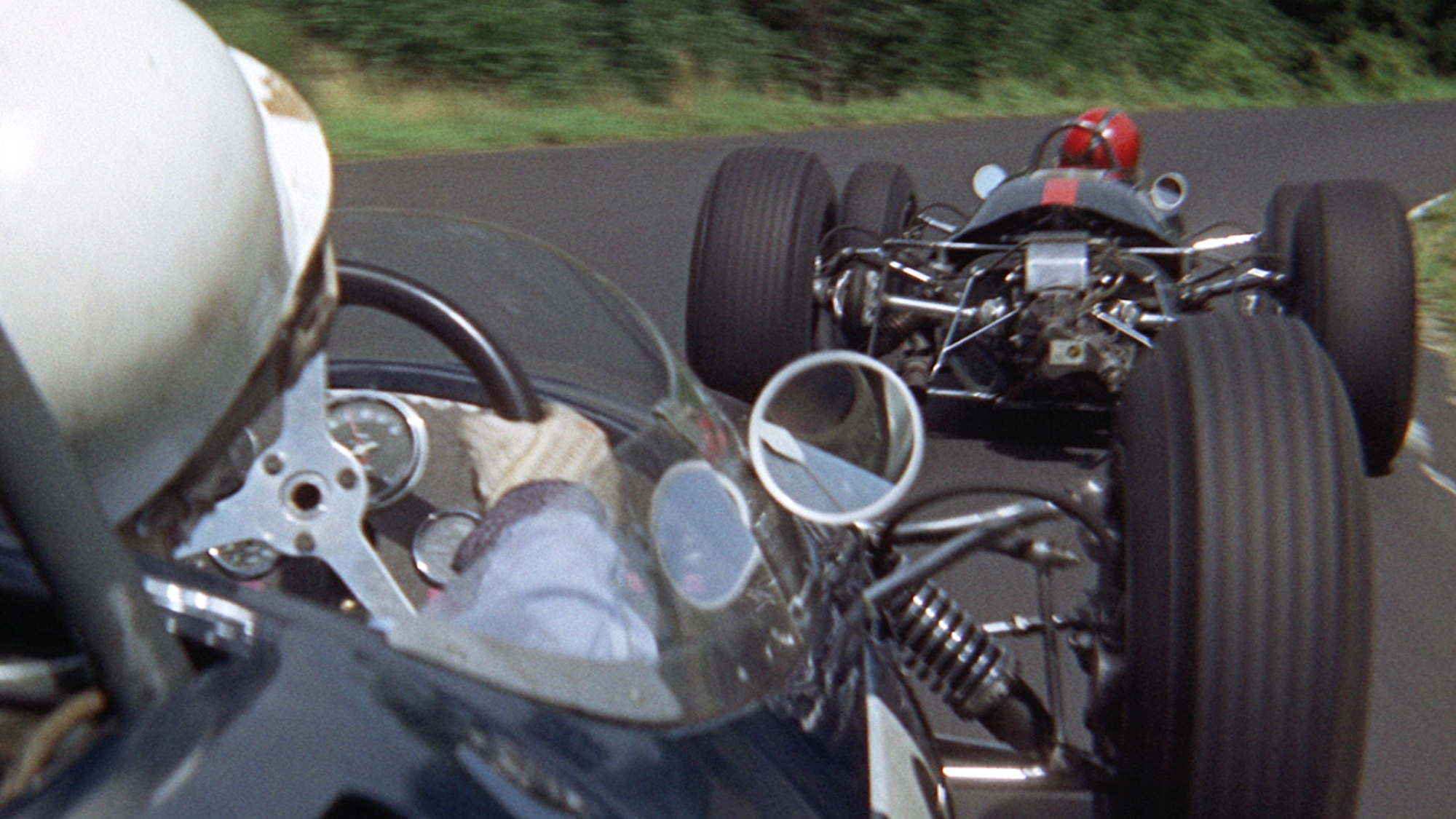 The scene then switches to the car-to-car action, filmed in the days following the race, featuring a pair of Reg Parnell-run Lotuses and Moss in a Rob Walker Brabham – all of which had taken part in the grand prix. Taken from the Lola T70 camera car, it’s superbly shot, but the best bit is the over-the-shoulder scenes of Moss in the Brabham taken from a camera bolted to the side of his car. Stirling almost seems to have forgotten he’s filming as he flies around the ’Ring, Roebuck dropping in that Moss once recalled the day fondly, saying it took him straight back to his final grand prix win at the circuit back in 1961… Spine-tingling stuff.

The Last Movie also includes similarly dramatic footage of another filming day at Oulton Park, when Hugh Dibley subbed for McQueen’s character in a Lola T70 during a GT race. Again, helicopter shots capture the greenery of motor racing’s venues in the mid-1960s as Dibley recalls his brush with Hollywood stardom – if only the film had been completed. Sadly, a combination of factors scuppered the project. 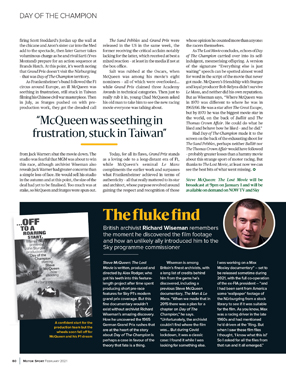 Day of The Champion film footage: The fluke find

Steve McQueen: The Lost Movie is written, produced and directed by Alex Rodger, who got his teeth into this feature-length project after time spent producing short pre-race features for Sky…

First, an unwell McQueen found himself marooned in Taiwan during 1966, filming another movie, The Sand Pebbles, for which shooting overran from its scheduled nine weeks to seven months… while Warner Bros lost its bottle as MGM and Frankenheimer cracked through filming of Grand Prix at the likes of Monaco, Clermont-Ferrand and Brands Hatch – but noticeably not at the Nürburgring, which was contracted to Day of The Champion. The documentary also follows the making of Frankenheimer’s classic, with fantastic behind-the-scenes footage made for Whicker’s World on the BBC – including an amusing clip of a dripping Garner losing his rag with a local official who is making trouble during filming of the scene when the actor’s character, Pete Aron, crashes into the harbour.

Archive interviews with Garner and Frankenheimer also reveal that McQueen was almost cast as Aron in Grand Prix, and that his Great Escape co-star was very much second choice, if that. There are all sorts of intriguing narratives, relationships and broken friendships that weave in and out of this story and you don’t have to love motor racing to find yourself hooked.

Warner pulled the plug on Day of The Champion in the summer of 1966 when it became clear MGM would beat it to the cinemas with Grand Prix – much to McQueen’s fury. But the disappointment only drove him on and appears to have fed directly into the famous car chase scene in Bullitt and most obviously into Le Mans, to the extent that Michael Delaney’s signature “Everything else is just waiting” speech is lifted almost word for word from the earlier script.

In Le Mans, McQueen achieved his ambition of creating an authentic ode to motor sport, completing a mission that had backfired so disastrously half a decade earlier. That it almost broke him too is central to our continuing fascination with ‘The Cooler King’. This masterful new documentary gets to the heart of what drove him on, revealing significant gems along the way – captured even in his absence.

Steve McQueen: The Lost Movie will be shown on Sky Documentaries and NOW TV on January 1, then will be available via streaming thereafter.

To read much more about its making and the story behind Day of The Champion, check out the February 2021 edition of Motor Sport, on sale now.