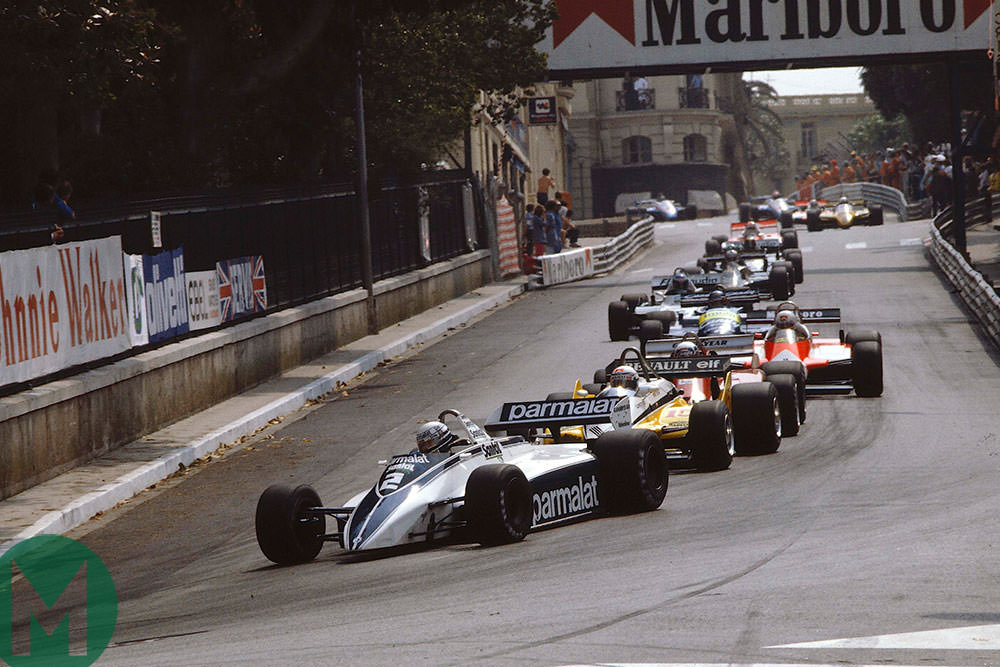 It would be the craziest of campaigns and a triumph for statistical improbability – 16 Grands Prix, 18 winners (11 drivers, seven teams) and a world champion who scored only one victory and averaged just 2.75 points per race… yet still finished five clear of his closest rivals (one of whom had missed six races).

It’s possible that there will never be another Formula 1 campaign quite like 1982.

It was also a year tinged with tragedy. Gilles Villeneuve died following a practice accident at Zolder and Riccardo Paletti perished when he crashed at the start in Montréal. Villeneuve’s team-mate Didier Pironi had looked a strong bet to take the title following a run of mid-season form that put him nine points clear in the title race, but then suffered career-ending injuries during the morning warm-up in Germany. Over the final five races, John Watson would move level with the Frenchman but only Keke Rosberg would edge clear.

Amid the sadness and the mayhem, Monaco – fast approaching its 76th running at the time of writing – conjured perhaps the year’s strangest race.

It was but a fortnight since Villeneuve’s passing and Ferrari entered just a single car, Pironi qualifying fifth behind René Arnoux (Renault), Riccardo Patrese (Brabham-BMW), Bruno Giacomelli (Alfa Romeo) and championship leader Alain Prost (Renault). Prost had won the opening two races – as many as any driver would manage all season – and the chances of him not adding to his score seemed slim, but…

Arnoux took an early lead from Giacomelli, while Patrese headed Prost and Pironi. Prost swiftly dispatched the two Italians, overtaking Patrese and then breezing into second as the Alfa stopped with a failed halfshaft. He took the lead on lap 15, when Arnoux spun and stalled, and – despite Monaco’s precocious nature – the result now seemed a formality. Recalling this race many years later, Patrese said: “I was trying to keep up the pressure and was absolutely ready to pounce if an opportunity came, but rather assumed I was going to finish second.”

That was still how things looked with 10 laps to go, at which point it began to drizzle. Prost and Patrese pressed on, but several others fell foul of the greasy conditions and began hitting bits of Prince Rainier’s extended back garden. And then, on the 74th of 76 laps, the previously immaculate Prost spun at the portside chicane – much faster then than it has since become – and clouted the barriers. Advantage Patrese.

The rain had by now intensified and the Italian eased up accordingly. As he entered the hairpin for the 75th and penultimate time, his Brabham looped around in a gentle spin. “I simply didn’t understand,” he said. “I could hardly have been going more slowly and never imagined it was possible to lose control at that speed. I just sat there feeling very cross while a few cars went past. I thought, ‘That’s it, you’ve blown it.’ The marshals pulled my car back out of the way, because its nose was on the racing line, and luckily for me they left the car pointing downhill towards Portier. I pushed the clutch and it began to roll forwards… and I had just enough speed to be able to get a bump-start using second gear.”

Pironi now led and appeared set to secure an emotional victory for Ferrari, but promptly ran out of fuel in the tunnel… and looked certain to have gifted Andrea de Cesaris his maiden F1 win, not to mention Alfa Romeo’s first (as a car builder) since Spain 1951.

Except that he, too, had run dry.

“I saw the parked cars of de Cesaris and Pironi,” Patrese said, “and thought, ‘OK, maybe I’m second,’ because I knew Keke Rosberg’s Williams hadn’t been far behind me when I spun. After I took the chequered flag, though, everyone in the crowd appeared to be waving to me and I wondered why. Then, when I got back to the pits, I was told to go to the podium. I was still confused, because in those days only the winner stood on the Monaco podium, so I assumed they must have changed their minds and wanted more drivers. When I got there, though, I was on my own. Rosberg had apparently crashed 10 laps before the end, but I’d had no idea about that.”

The truth finally dawned, yet still there remained a nagging question.

“I was obviously happy to score my first Grand Prix win,” he said. “The last couple of laps were completely crazy, but it was a great day for me. I still had no idea why I’d spun, though, because it just didn’t seem feasible.”

The answer lay in the design of the Williams FW08, as driven by Rosberg and Derek Daly. Irishman Daly had been with the leading pack in the closing stages, before spinning and reversing into the barriers. He rejoined minus his rear wing and one other key detail – the rear-mounted oil catch tank.

“More than 20 years later,” Patrese said, “I was reading a magazine interview with Derek. He mentioned Monaco… and the fact he had trailed oil all around the circuit after his accident. I hadn’t noticed at the time because the circuit was so wet, but finally I had an explanation…”