You knew where you were with Luigi Fagioli: in his bad books – unless, that is, you were helping to ensure he was winning.

Because of his generally grumpy demeanour, dégagé dress sense and iron filings stubble (although he brushed up well on occasion, as in the photo below), I can’t help but warm to this man from Osimo, a town in Italy’s Marche that overlooks the Adriatic.

But then I never had to act as his team manager. 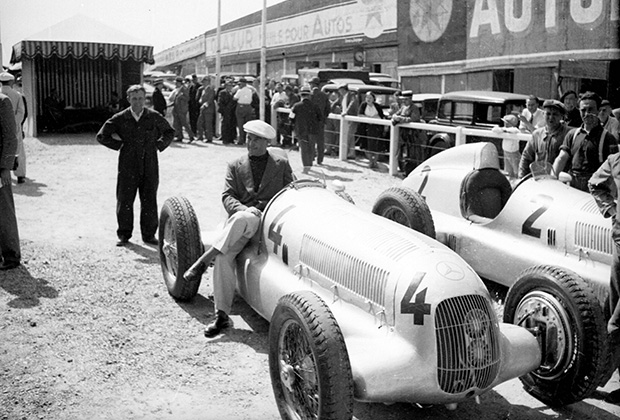 Alfred Neubauer, the fat controller of the Mercedes-Benz ‘Silver Arrows’, did – and his version of their relationship is a litany of bilingual bust-ups at inopportune moments, i.e. during races, petulance and violence, both threatened and attempted.

It’s fair to say that they got off on the wrong foot.

When it was reiterated that his blue-blooded Prussian team-mate Manfred von Brauchitsch, for whom entitlement was second nature, must be allowed to win the 1934 Eifelrennen – the race debut of M-B’s Silver Arrows – Fagioli parked in protest.

‘Caratsch’ was a source of constant irritation to Fagioli. The German with an Italian surname was Neubauer’s favourite – they went back a long way – and it showed.

But Caracciola was still hampered by the hip damaged when he crashed his privateer Alfa Romeo Monza during practice for the 1933 Monaco GP. That’s why there was no fight – grit? – left in him after Fagioli sprung his ambush in San Sebastián. 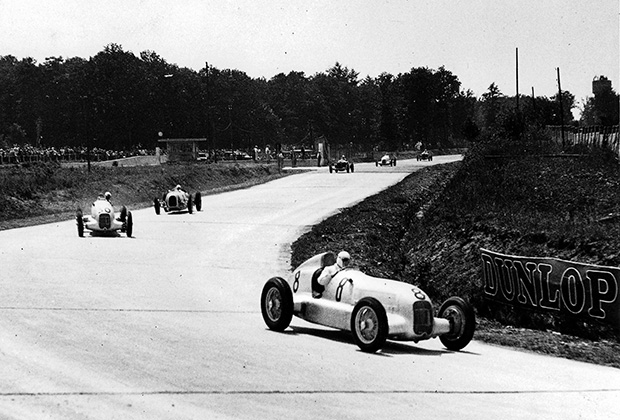 The situation was different in 1935. Caracciola had recovered – though his limp was permanent – and he was able to reassert his relentlessness and savvy strategies over a full race distance: more than three hours on rough roads in those days.

Fagioli was untouchable at Monaco, becoming the first man to lead this race from start to finish – all 100 laps of it – but thereafter tended to play an unwilling and disaffected second fiddle to a driver who was now the team’s leader in deed and not just name.

During the Belgian GP at Spa, in the immediate aftermath of another shouting match with Neubauer about team orders, Fagioli leapt from his car and stalked away. (His uncomfortable personal truth was that Caracciola was now more than a match for him.)

In Spain, Fagioli strove mightily to repeat his win of 1934, but this time Caratsch, signalled to the wise, was ready for his nemesis and responded to and matched his every move.

Fagioli was a pain in the arse in short. But he was quick. Plus it was politically expedient for the team to contain a representative from the other major Axis power. So it kept him on for 1936.

The season was a disaster. The new Merc was too powerful for a chassis made twitchy by an unwise reduction in wheelbase.

Which is the gist of what Fagioli told Neubauer in the midst of the German GP. This time, however, Neubauer spiked his loose cannon by hauling him from the car and inserting Caracciola. 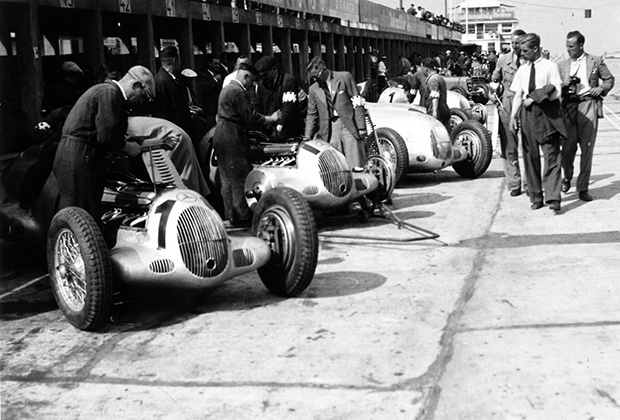 Yet even this wasn’t Fagioli’s denouement with Mercedes-Benz. He finished fourth at August’s Swiss GP in a W25C he shared with his former mechanic – and class-conscious von Brauchitsch’s worst nightmare – Hermann Lang.

And there might have been more M-B outings for Fagioli yet had the team not then withdrawn to tend its wounds, and have precocious engineer Rudi Uhlenhaut lick its 1937 car into shape.

Fagioli never did get his hands on the resultant magnificent W125. He had joined Auto Union, replacing his morphine-addled countryman Achille Varzi. Out of the frying pan into the fire.

He did get hold of a wheel hammer, however, and, according to Neubauer, hurled it at Caracciola to express his displeasure at the latter’s blocking antics during the Tripoli GP.

And it missed by inches.

You knew were you were with Fagioli: in the danger zone. 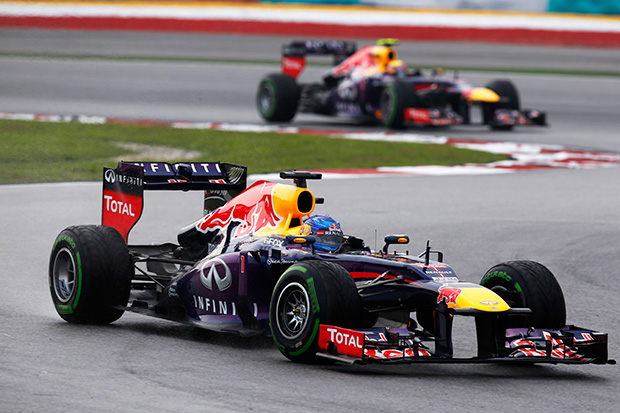 Yet despite the telemetry of today, the intense media scrutiny, the 24-hour feeds and the real-time communication between car and pit, Mark Webber was seemingly caught off-guard in Malaysia by a cheap shot from his team-mate.

Were you surprised by Vettel’s action? I wasn’t. It’s so obviously his team – no matter what it tells Webber during their contractual negotiations – and he’s a multiple world champion who grew up watching Michael Schumacher.

He’s used to winning. He likes winning. So he won.

Vettel’s victory lacked class and his volte-face apology was crass – but the concurrent situation at the latest iteration of the Silver Arrows is, to me, the more insidious.

Whereas the pecking order at Red Bull has long been established, there seemed all to play for at Mercedes-Benz: Nico versus Lewis, the friendly rivals.

And it was brewing nicely at Sepang – albeit within DRS zones that were too capacious – until Ross Brawn got on the blower. In schoolmasterly tones – as opposed to the silly schoolboy euphemisms and techy gobbledegook of mealy-mouthed Red Bull Racing – he basically told Rosberg to sit down and be quiet.

And that’s precisely what he got bar a few teenager-y mutterings. 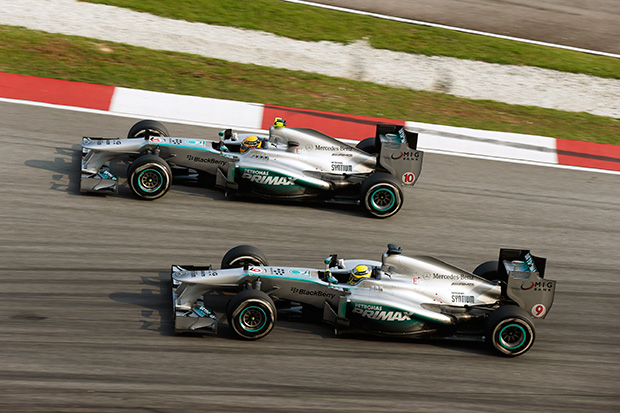 So that’s the side of its garage Mercedes thinks is buttered – no matter what Niki Lauda (who has in the past pointed out that he would have become the 1976 world champion had Ferrari reminded Clay Regazzoni at Monza who its number one was) and the politicking Toto Wolff might say.

We might have guessed. But now we, Hamilton – surely he was smiling inside – and Rosberg know because Brawn has ‘told’ everyone, and nobody knows this sort of stuff better than he.

It was, however, insipid stuff.

At least Vettel and Webber (briefly) hammered it out like racers. Tasty stuff.

And who knows, it might have been very different given a handful more AussieGrit. Yes, Webber missed his opportunity to reverse the Red Bull roles, but at least he got an opportunity.

Fagioli would have understood that danger zone – wheel to wheel and missing by inches at 190mph – because it’s where you know where you stand. Or fall. Or get out. 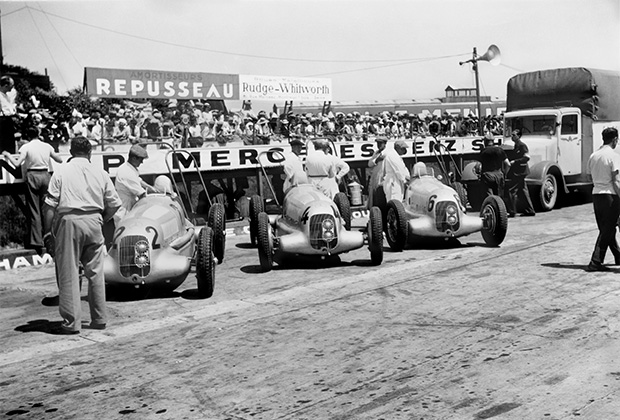 The rest of it?

Fades out to radio static.

And ‘Cut!’ before the stage-managed recriminations and remorse.