The final triple-header of the 2020 Formula 1 season gets underway in Sakhir on the normal International Circuit layout this weekend for the Bahrain Grand Prix.

Following the dramatic Turkish GP, the drivers’ title has been settled with Lewis Hamilton clinching his seventh championship with a brilliant drive, but there is still much at stake heading into the final rounds.

Red Bull looks set to finish a distant runner-up in the constructors’ championship, but as things stand, there is no clear favourite for best of the rest between the battling midfield.

Renault, McLaren, Racing Point and a resurgent Ferrari look ready to battle it out over the final three rounds, with just 24 points separating third from sixth.

The difference between those places equates to around £80m in prize money.

Ahead of the first of the final three rounds, here’s what you should be keeping an eye on over the 2020 Bahrain Grand Prix weekend. 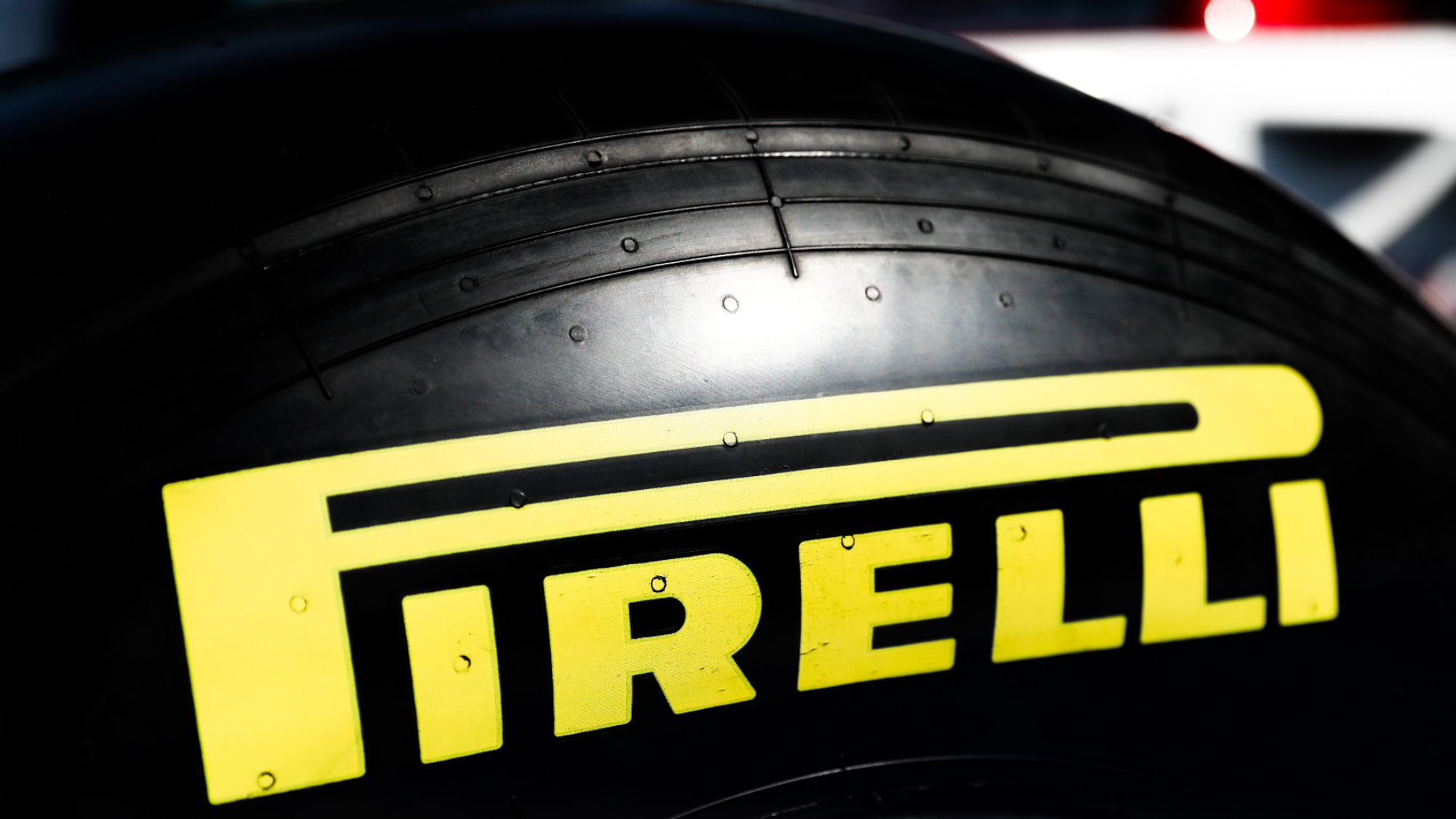 More 2021 testing will be going on in Bahrain this weekend

Pirelli will conduct further 2021 tyre testing over the Bahrain and Abu Dhabi race weekends, with a new C3 tyre set to be trialled during FP2 of the Bahrain Grand Prix.

The compound remains the same but the front and rear tyres have a new construction, potentially benefitting some teams at the expense of others. The Italian manufacturer is looking to homologate its updates ahead of the short winter break.

Teams will be allocated tyres during the second practice session in Sakhir, with two extra sets of the C3 compound handed over to teams for the first 30 minutes of the session.

“In Portimao we supplied different prototypes to different teams, not the same to everybody, so not all the teams have been able to test what we have decided to homologate, so that is the plan for the next events,” Pirelli motorsport boss Mario Isola said in Turkey.

“We have decided to homologate a new front and a new rear construction. The new front is the one with the biggest difference compared to this year, with the different profile, a different construction. We carry over the compounds to next year.

The new tyres will be a continuation of the current compounds in use but the front tyres in particular have been reworked by Pirelli for next season.

While the times won’t be entirely relevant to the rest of the race weekend, driver feedback over team radio will be interesting to hear. 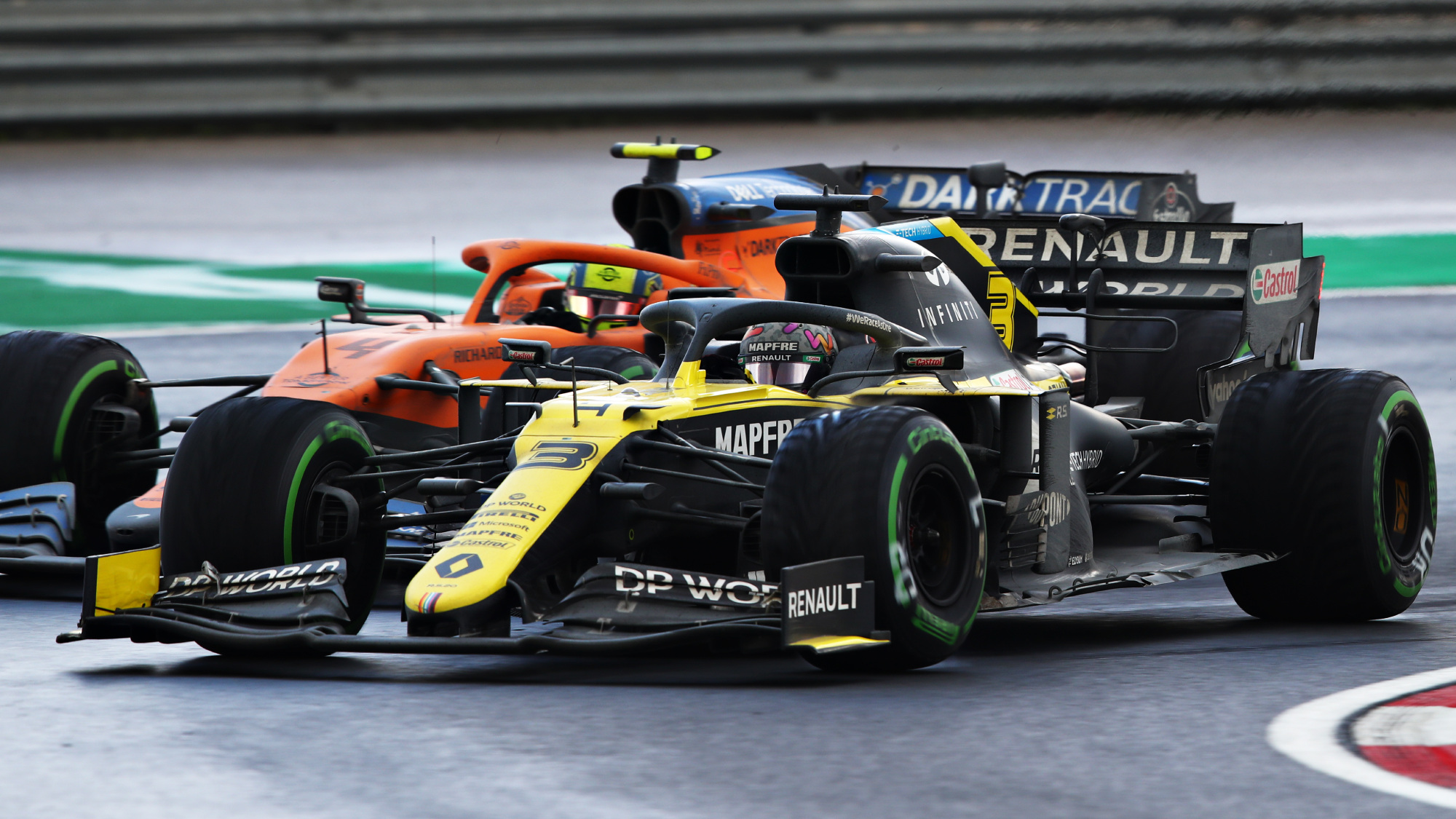 Four teams are in with a chance of finishing in third position by the time the chequered flag closes a chaotic 2020 season in Abu Dhabi.

Racing Point currently heads up the fight after a great result in Turkey and Sergio Perez’s podium finish, while McLaren’s subsequent decline in performance relative to its rivals has seen the team slip back into fourth and into the clutches of Renault.

Not so far behind anymore is Ferrari, whose updates have brought it back into contention relative to the beginning of the season in which it was woefully off the pace.

Last season, Ferrari secured a podium finish in Bahrain and a repeat result would be very welcome but probably unlikely.

Out of the four, it is the French team that has the most podiums in the past five races, with Daniel Ricciardo’s Eifel and Emilia Romagna GP performances putting him on the podium in third and securing vital points as things tighten up. 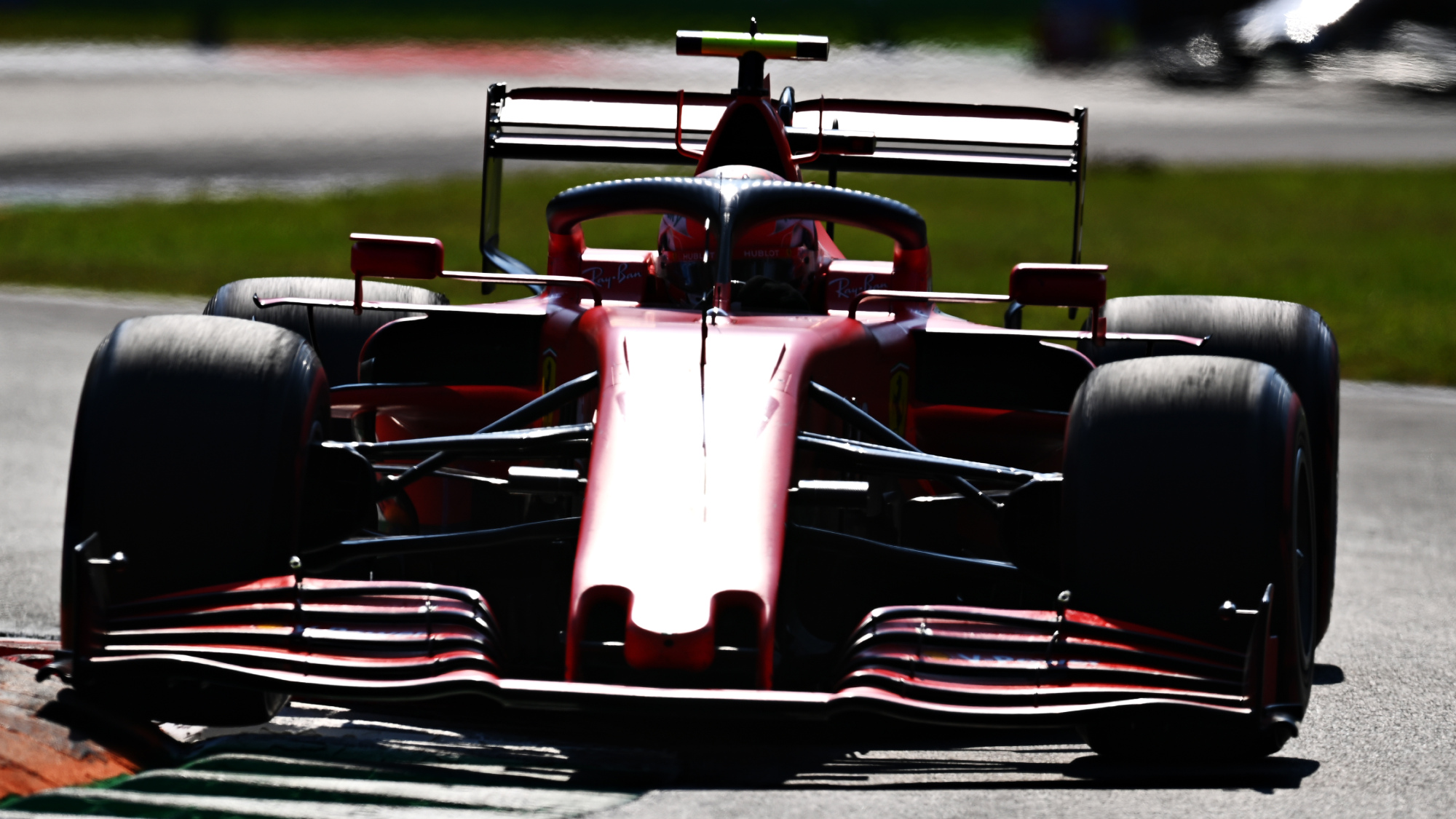 Ferrari ran with a very skinny rear wing in Monza. Could we see teams trialling the same for Bahrain?

The first of the races around the Sakhir International Circuit will look familiar. The following weekend will see the layout change to the outer-loop version where a lap is expected to last just under a minute, with two-thirds of it made up of straight-line blasts, so top speed will be crucial.

No team will be running exactly the same configurations for both races but keeping tabs on the speed trap classification could give an indication as to who is focusing on their top-end performance.

Seeing wing levels compared with other teams will be an interesting area to keep an eye on. Is anyone planning a Monza-esque package for next weekend? 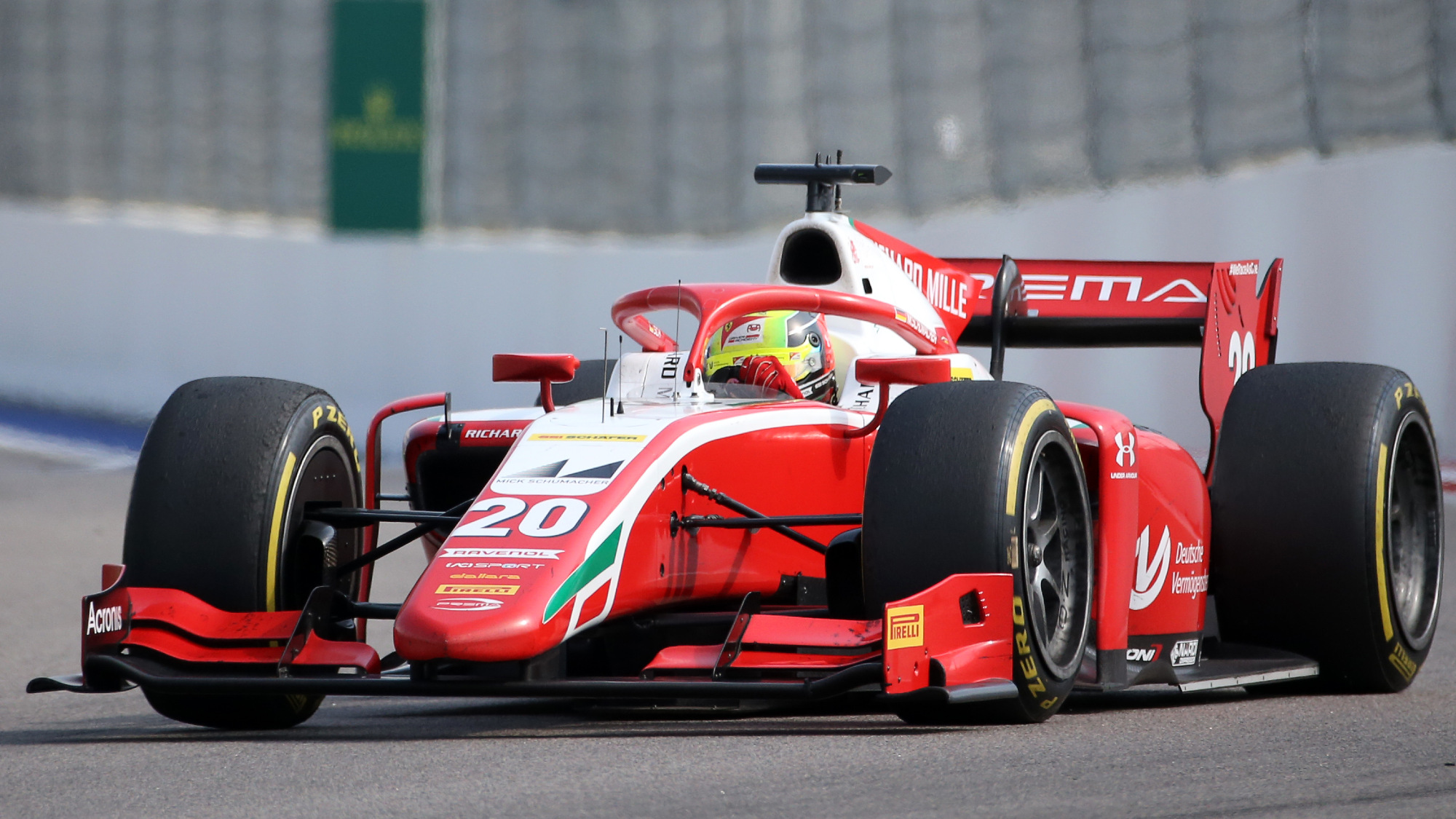 The Formula 2 title will be decided in Bahrain and it is Mick Schumacher leading the way heading into the penultimate race weekend of the season.

He heads up fellow Ferrari Driver Academy driver Callum Ilott by 22 points with 98 still remaining in 2020. Honda junior Yuki Tsunoda, Renault’s Christian Lungaard, Ferrari’s Robert Shwartzman and Nikita Mazepin all remain mathematically in with a shout of the title as well.

With the Bahrain races taking place at twilight, the F2 feature race will take place ahead of qualifying and will be one to keep an eye on at 9am GMT.

Schumacher and Mazepin are the two drivers most likely to be making the step up to the F1 grid in 2021, but the rest will be eager to show teams they have what it takes to make the next step in their racing careers.

All season long the racing has been frantic and the final two race weekends will not be any different with the title on the line.

Can Schumacher hold on to his lead and take the 2020 F2 championship or does an already unpredictable season have yet another twist in the tale in the final hours? 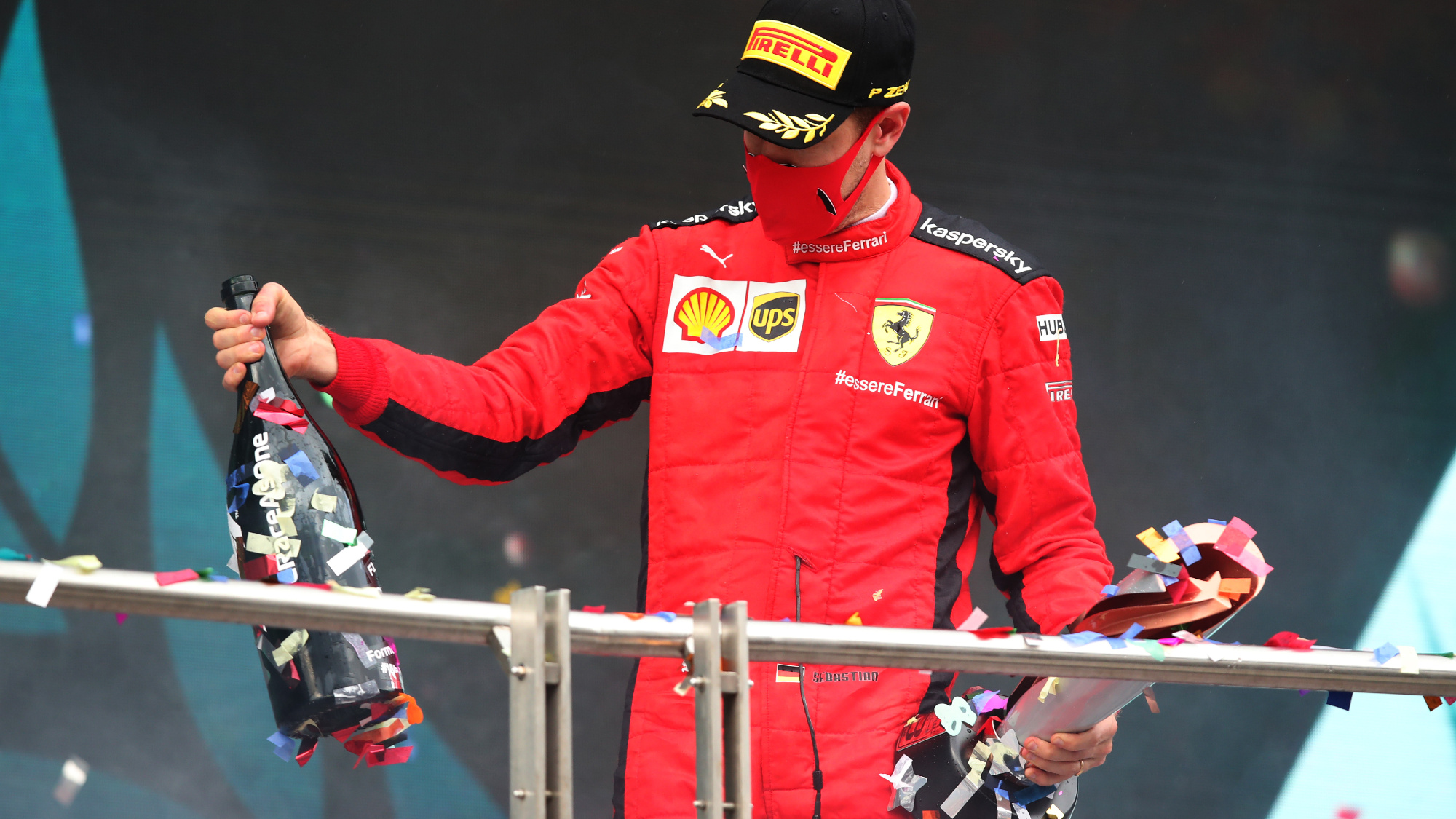 Could there be more podiums on the way for Ferrari?

Has Ferrari cured the worst of its handling deficiencies? Recent performances suggest that the Scuderia has made steps forward with its difficult SF1000.

Both of its drivers had a real chance of a podium in Turkey, with Sebastian Vettel showing his experience in the difficult conditions to nip third from Charles Leclerc two corners from home.

Team boss Mattia Binotto has been bullish recently over possible gains it has made in recent races as well as with its 2021 car. The Ferrari team boss also credited Vettel for having solved a lot of his issues that had plagued him earlier in the season, resulting in off performances versus Leclerc.

Once more, Binotto will not be on the pit wall throughout the race weekend having missed the Turkish GP, as the team focuses on its 2021 car to reverse its fortunes following a disastrous season.

It might be a welcome situation for Vettel, who joked after the race “if the next race we don’t score as many points we try again to leave him at home!” His absence coincided with the four-time champion’s best performance of the season last time out in Istanbul.

Binotto’s decision that the team had to overhaul its entire concept at the beginning of the season looks to have paid off, with the Turkish GP the team’s biggest points haul of the season so far. 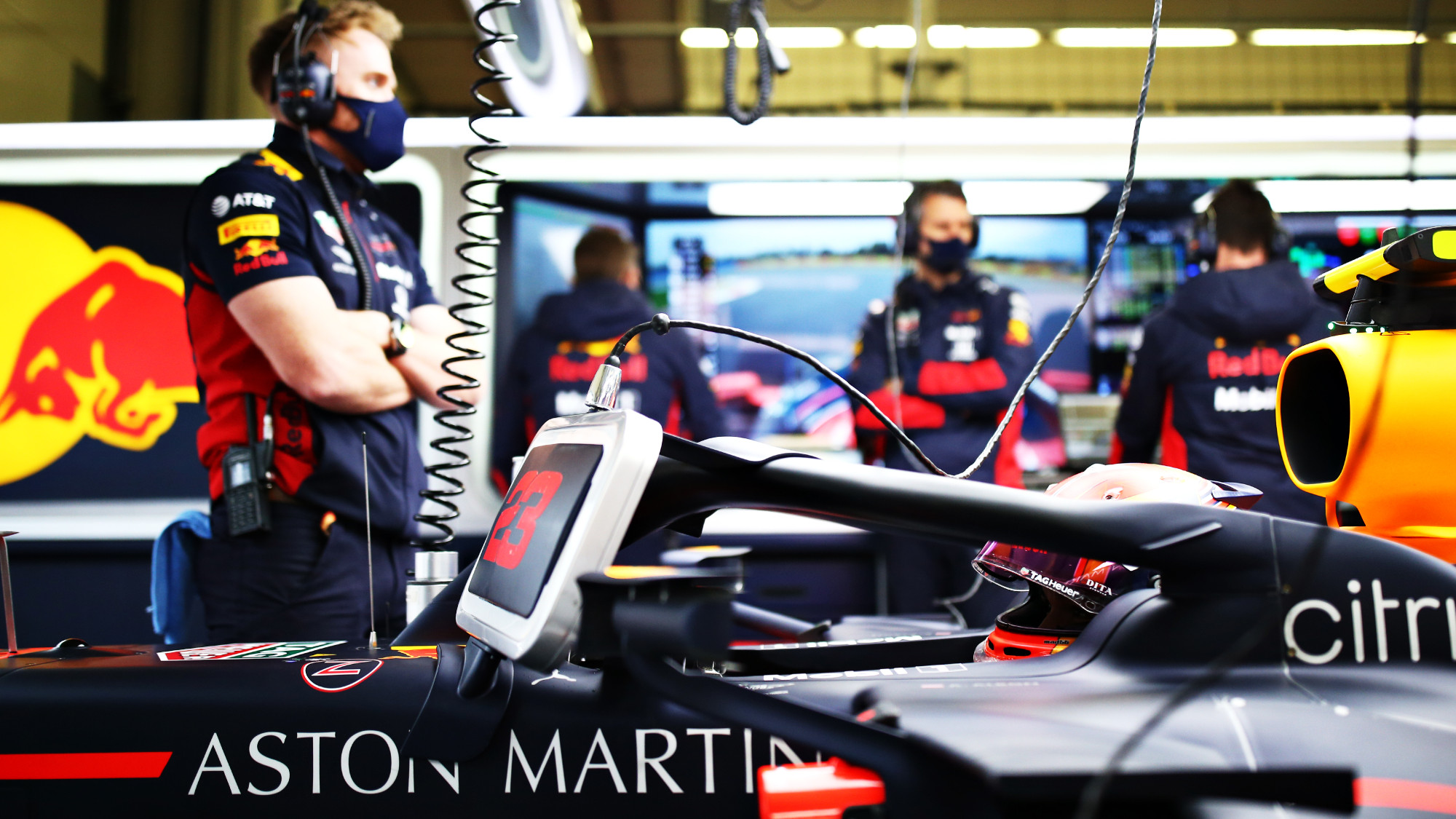 The Amazon Web Services graphic indicating true qualifying pace will get its first chance to show whether the data stacks up during a session with relevant track conditions.

Named ‘qualifying pace’, the new on-screen display will rank drivers based on analytics gathered from the cars during the final session ahead of the all important qualifying hour.

Machine learning takes into account multiple parameters including prior running from FP1 and FP2, projected fuel levels and the lap the best time was set on during a longer stint, estimated power unit mode and track grip to give a better picture of who is looking fast versus who is running light.

After a less than ideal race weekend in Turkey on a brand new surface that gave up little in the way of grip throughout proceedings, the true pace graphic will be a little more accurate this weekend.

AWS graphics have been hit or miss amongst fans and certainly divides opinion, but it will be interesting to see how accurate the predictions are now that F1 has returned to familiar ground in Bahrain.