In championship terms, the last five laps ensured the two contenders were neutralised. Max Verstappen, on his way to an apparently comfortable Baku victory, suffered a sudden deflation of his left rear, pitching him hard into the wall at over 200mph. Sixteen laps earlier Lance Stroll had suffered an apparently identical failure. An initial safety car for the Verstappen accident gave way to a red flag as the debris was cleared up. Which left two more racing laps. From a standing start. A sort of mini-Prix, with Verstappen’s Red Bull team-mate Sergio Perez on pole alongside Lewis Hamilton’s Mercedes. But Hamilton lasted only a few seconds into the mini-Prix before locking up his front wheels and running up the escape road, rejoining last. The top of the Drivers’ Championship remained exactly as it was coming into the weekend, with Verstappen four points in front of Hamilton, six rounds down.

Like that, Perez won a grand prix for Red Bull. The RB16B was always the form car around here despite not having secured pole, or even the front row – and Perez made a breakthrough in his personal performance since joining the team.

Red Bull with its decent power, slightly better deployment than Mercedes, great low-speed performance and excellent tyre usage was the perfect package for Baku as it turned out. The team arrived with a choice of two new spoon-profiled wings and chose the higher-downforce version to better look after the tyres.

Mercedes, with its tendency to struggle for tyre temperatures on low-energy circuits like this (both from the low grip of a street track surface and its low-energy, slow, short corners) was a difficult beast. Mercedes began the weekend with quite a high downforce wing by Baku standards, trying to switch on the tyres. But even that wasn’t doing it. They back-to-backed this wing with a lower-downforce one in FP3 and Hamilton decided he’d go with the skinnier one. That and lots of other changes finally brought the car into contention – over two laps, at least (it needed two laps to bring the tyres in). Hamilton put it on the front row, with some tow assistance from his team-mate. Valtteri Bottas stayed with the bigger wing and at no point in the weekend was he anywhere close to the pace, qualifying 10th and finishing out of the points. 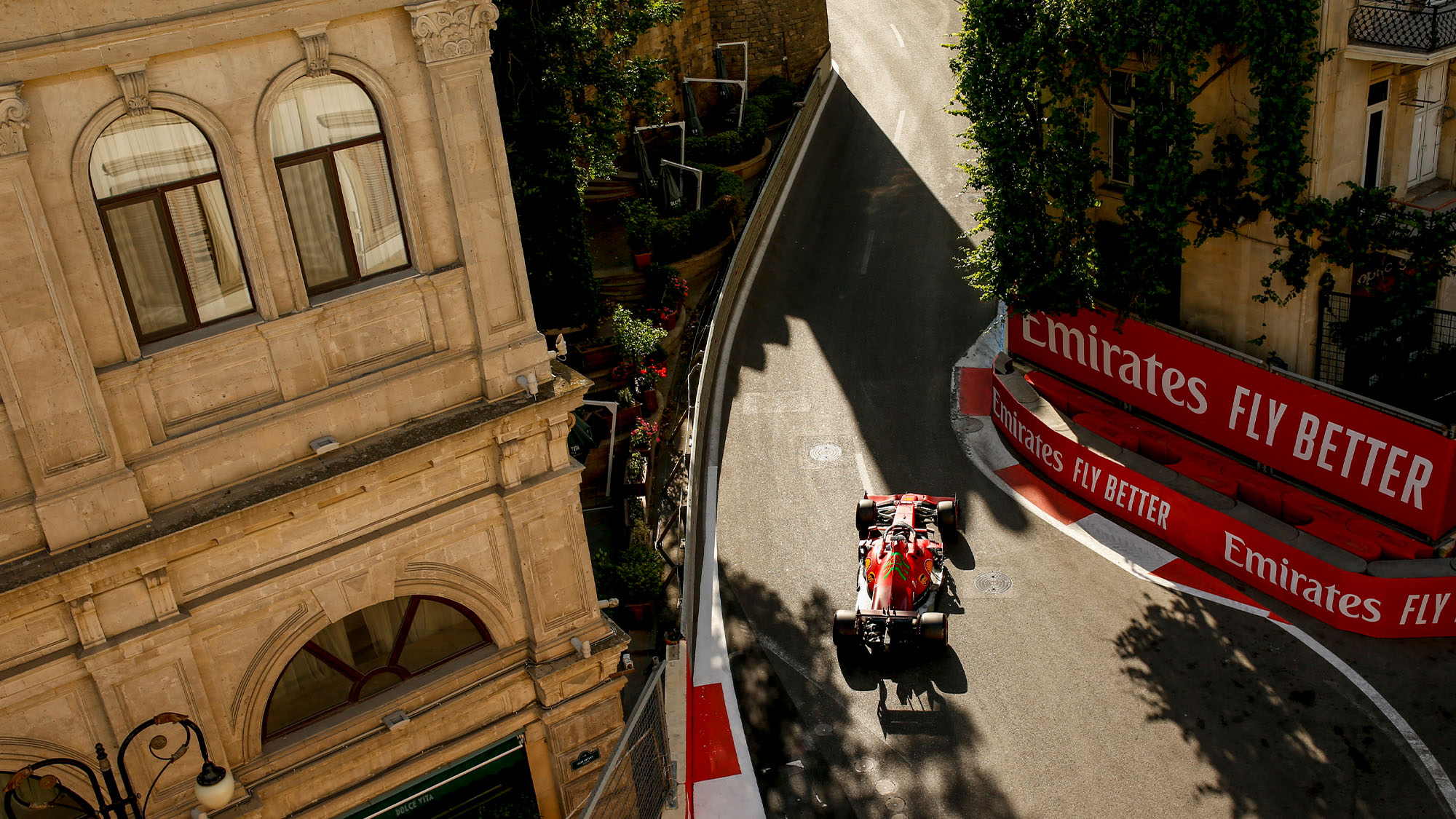 Ferrari with its power deficit of around 25bhp and slightly draggier shape knew it was going to be compromised by that 1.4-mile final flat-out stretch parallel to the Caspian. But that its superb agility and easy rotation would be a great asset through the tight old town section. So it would rely on that to keep it in shape there and go with a super-skinny wing to give it competitive speed on the straight. It not only saw them competitive around a track of which they had low expectations but Charles Leclerc, aided by a tow from Hamilton, stuck it on pole for a second consecutive race – Ferrari now has twice as many poles this year as Red Bull!

The positions were perhaps a little mixed up by the Yuki Tsunoda-induced Q3 red flag which denied everyone second runs, the tow-free Verstappen in particular, the scrappy-lap Perez also. Hence they would be starting only third and sixth respectively in what were, in reality, the fastest cars.

A skinny wing around this highly unusual track layout can get you a good qualifying time, probably a better time than a more race-suitable wing which looks after the tyres. Ferrari and Hamilton were flattered in qualifying by their wing choices, and the respective quality of Leclerc’s and Hamilton’s laps. But they were sure to eat their rear tyres faster than the Red Bulls and so it proved.

Hamilton was past initial leader Leclerc at the end of the opening lap, Verstappen and Perez following through not long after. They left the Ferrari behind to fend off the hustling Pierre Gasly’s AlphaTauri.

Hamilton’s straightline advantage was enough to thwart Verstappen’s DRS-aided attacks. But after just nine laps Hamilton’s tyres were fading, luckily for him just as a pitstop’s-worth of gap had opened up behind. He was brought in on lap 11 for a set of hard tyres on which to get to the end.

Red Bull responded with Verstappen on the following lap. His in-lap was 0.8sec faster than Hamilton’s but crucially his pit stop was over 2sec faster. This was because Mercedes had been obliged to hold Hamilton for a couple of seconds to allow Gasly to pit. It was enough to comfortably clear Verstappen past Hamilton. 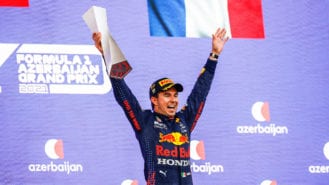 The Azerbaijan Grand Prix had a 2-2 record coming into today’s race. Twice we have seen utter drama and chaos, and twice we have endured borefests. The fifth edition did…

Perez was brought in a lap after Verstappen and he’d got even more tyre left. His in-lap was 0.5sec faster even than his team-mate’s but the advantage of that was lost as he ran a little beyond his marks at the stop. Vital time was lost as the rear gun guys shuffled up their equipment to reach. But he’d still done enough to exit ahead of Hamilton.

Both Red Bulls had overcut their way past the Mercedes. That was purely a function of how much better shape their soft tyres were in, protected by that bigger wing. The true performance order which had been mixed up by qualifying had now been restored.

Barring safety cars, the hard tyres would now get everyone to the end with no more stops. The podium looked to have been decided. Hamilton could hang on, applying the pressure lap after lap, but Perez always had him covered. Verstappen gradually eased out a gap which would reach up to 8sec.

The hard was by far the best of the three available compounds and Lance Stroll had used it as his starting tyre from the back row his qualifying accident had left him on.

Furthermore, the Aston Martin is really good on its tyres. This had allowed Sebastian Vettel to stay out long enough on the soft that he was leading the race after the front-runners had pitted. He rejoined just behind Leclerc, who had been overcut by Gasly. The other Ferrari of Carlos Sainz had fallen from contention after he ran up an escape road on his out-lap, struggling with brake-locking on cold tyres.

Stroll was running fourth but had yet to pit. He was maintaining a decent pace on tyres almost 30 laps old. Then the left rear blew at almost 200mph on the straight and put him in the wall just before the pit entry lane.  The pitlane was closed as the race came under the safety car. There’d been no warning, just the sudden decompression. Pirelli is investigating the cause and says it suspects a debris cut (a big cut was later found in the same tyre on Hamilton’s car). But the centrifugal forces on a tyre at that speed for that long are considerable. The left is not the most loaded tyre around this anti-clockwise track, but the inside tyre gets dragged through some odd loads and the failure appeared to be on the inner shoulder. But other cars on the hard managed to do considerably more than the 30 laps Stroll’s had failed on. 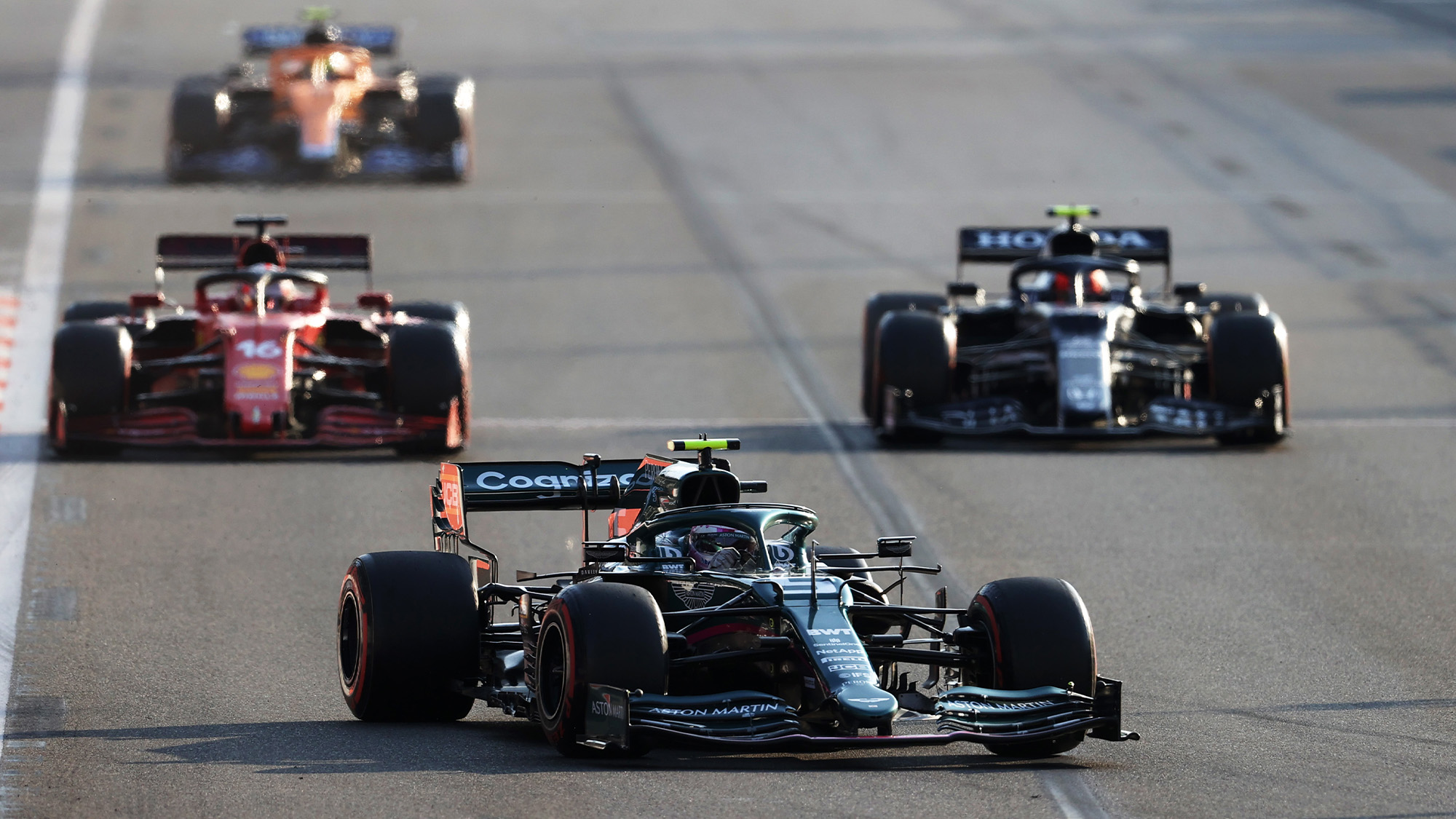 Vettel made the most of the restart, after Stroll’s crash, to pass Leclerc and Gasly

The safety car came in after the mess was cleared, Red Bull worked as a team in keeping Hamilton behind while Verstappen escaped and Perez played rear gunner. Vettel used his much newer tyres to nail both Leclerc and Gasly on the restart lap to vault up to fourth.

Sixteen laps after Stroll’s incident – five from the end – Verstappen’s left-rear failed in the same way, again with no prior warning. His tyres were on the 34th lap. He crashed further down the pit straight and after a couple of laps of safety car the red flag was shown.

The last two laps of the race would go ahead from a standing start, with prior tyre changes permitted. Everyone opted for the soft.

Hamilton got a better launch than Perez who then swooped aggressively across on the Mercedes. Hamilton moved left in reaction but in doing so snagged a button on the steering wheel which controls the ‘brake magic’ (a device used to give full forward bias to get heat into the tyres). So as he stood on the brakes the fronts locked and took him straight up the escape road as the rest of the pack went by.

Perez was up and gone, Vettel forlornly chasing him, Gasly scrapping fiercely with Leclerc, Lando Norris watching on from close behind. Sainz had again run wide on cold tyres and was passed by Tsunoda and Alpine’s Fernando Alonso who then also passed the AlphaTauri, putting him sixth from his 10th place restart.

Unknown to Vettel, Perez’s hydraulics were on the point of shutting off. But they held on long enough to get the Red Bull across the line to victory. He stopped immediately. Vettel and Gasly completed a very happy podium.