Daniel Ricciardo’s bet that he would finish on the podium last year is yet to be fulfilled with former Renault boss Cyril Abiteboul but the 30-year-old hasn’t wasted time lining up another one at his new McLaren home.

His team boss for 2021, Zak Brown, has a fear of needles and an extensive car collection. With no tattoo on the table, Ricciardo has set his sights on a different end goal: a drive in a car that was raced by the Aussie’s racing hero.

Brown has agreed to the bet, and confirmed that Ricciardo will be able to drive a prize car from his collection if he can finish on the Formula 1 podium for McLaren.

We know how much you enjoy a podium bet, @danielricciardo.

How does a drive of one of THE most iconic cars in @ZBrownCEO’s heritage collection sound? 🤩🇺🇸 pic.twitter.com/yj17DLiEjM

During the Bahrain Grand Prix weekend, Brown gifted Ricciardo a scale model of the car he hopes to drive in real life as an extra motivation to carry through the season, posting a video of the moment on social media.

Ricciardo’s grin was wider than ever as he unboxed a miniature version of Dale Earnhardt’s No3 Chevrolet, which is part of Brown’s extensive historic road and racing car fleet. 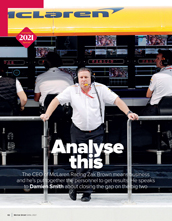 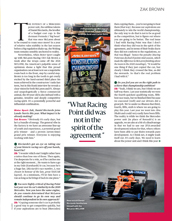 The potency of a Mercedes power unit, the sublime talents of Daniel Ricciardo, the leveller of a budget cost cap: is the dormant Formula 1 ‘big beast’ that was once…

It’s a meaningful incentive for the new McLaren driver, whose chosen race number 3 was selected in honour of the seven-time NASCAR Cup Series champion and stock car legend, who he views as a racing hero from his childhood.

The bet stems from last year’s wager where Abiteboul agreed that he would get a tattoo if Ricciardo finished on the podium for Renault — a feat that he achieved twice. Abiteboul blamed Covid-19 restrictions for preventing him from carrying out his side of the bargain last year.

A conversation with the McLaren team principal just ahead of this year’s car launch seems to have sown the seeds for a second bet.

“We were just having lunch with Zak a couple of hours ago and he mentioned something about him hating needles,” Ricciardo said at the launch in February.

“I can’t see that tattoo thing happening with Zak. But we’ll think of something else. I know he’s got a pretty good car collection, so maybe we could just bet one of his cars or something.”

Brown revealed during an exclusive interview with Motor Sport in the April edition that the prospect of a drive in the Chevrolet had caught the Australian’s attention and that he’s expecting to hand over the keys at some point this season. 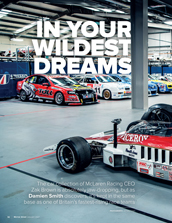 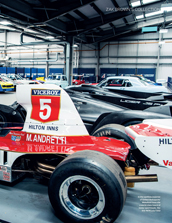 “I wonder which one!” Brown joked. “I might rather have a tattoo than lose one of those. Then again, I’m desperate for a win, so if he catches me at the right moment… He wants to have a go in my Dale [Earnhardt] Sr car, because he’s a huge fan.

“At a minimum, I’ll let him have a run as long as he brings it back in one piece.”

Read more about Ricciardo’s arrival at McLaren, Brown’s hopes for the team in Formula 1 and beyond as well as the preview of the F1 season in the April edition of Motor Sport.