Red Bull hit back hard after its disappointing performance in Melbourne – with Max Verstappen and Sergio Perez delivering a resounding 1-2 in Ferrari’s backyard of Imola. A disastrous weekend for the Scuderia saw Carlos Sainz – who’d crashed out of Q2 on Friday, but recovered well in the sprint race to start fourth on Sunday – spun out on the opening lap by Daniel Ricciardo, leaving the crowd’s hopes resting upon Charles Leclerc. Losing the Saturday sprint race to Verstappen with just over a lap to go punished him especially hard on Sunday for the even-numbered side of the grid was much wetter and more slippery than the odd. Which put Red Bull 1-2 by the first corner and in full control of the race.

On a track which remained damp offline even after everyone was able to get onto slicks after 18/19 laps, the Ferrari driver was unable to pierce Perez’s defences. He tried for so long that eventually his front tyres were no longer allowing him to attack. Ferrari at this point threw the dice and pitted him again, reasoning correctly that Perez would pit in response and that this would give a tyre re-set which would allow Leclerc to attack once more.

He attacked rather too much, clipping the Curva Gresini (formerly Variante Alta) kerb hard enough to spin the car into the barrier, requiring a further stop for a new nose. Rejoining 10th, he picked off some slower cars to finish sixth. Thin pickings indeed by the 2022 standards of Ferrari. 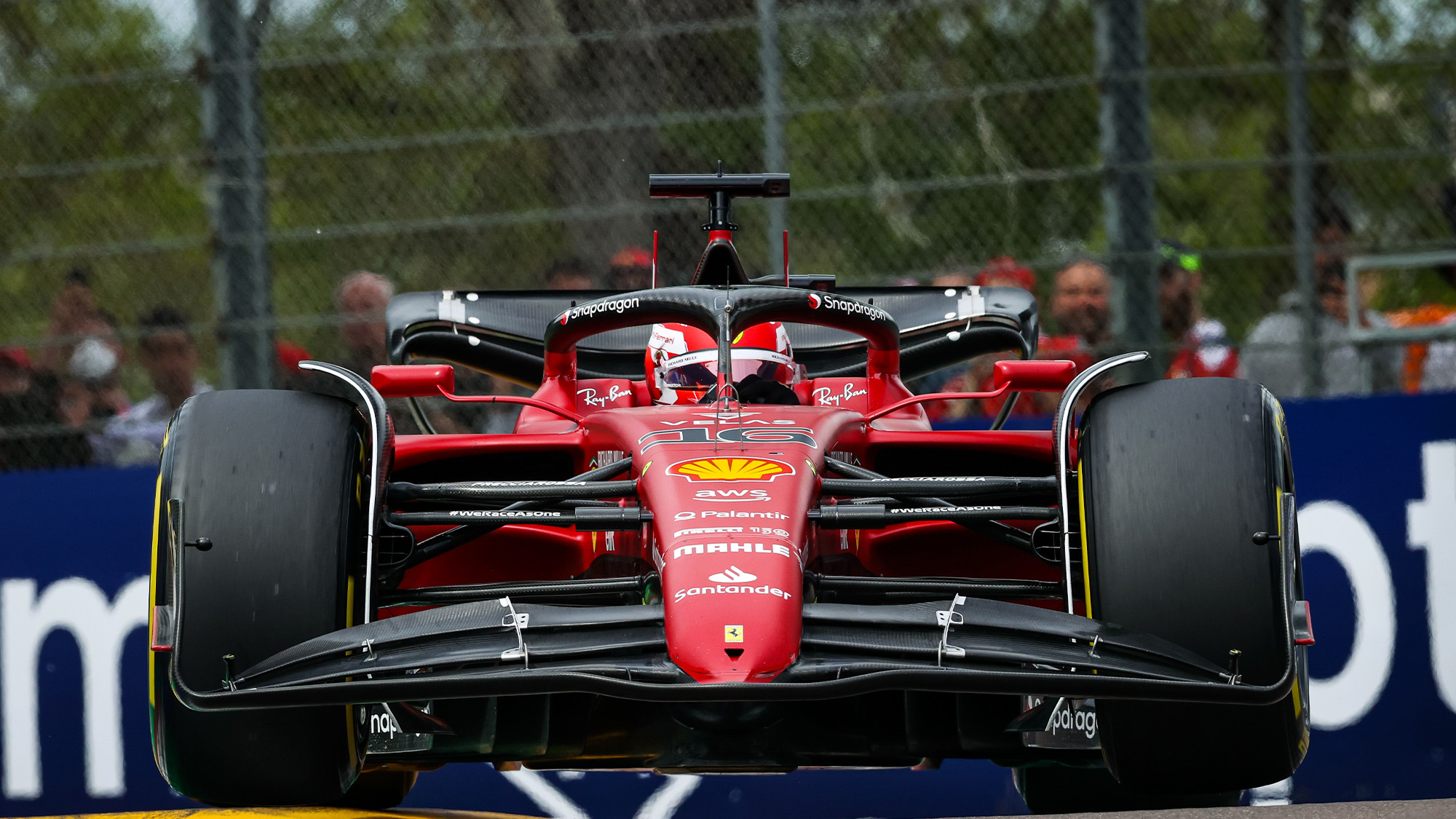 Leclerc attacks the kerbs: that approach would cost him later in the race

Was the Red Bull quicker?

Red Bull brought a few tweaks to Imola; the Ferrari remained unchanged. From being 10kg heavier than the Ferrari for the first three races, here the Red Bull had lost around 3kg of that excess. A winglet had been added to the leading edge of the floor, bringing some extra aero load.

Christian Horner reckoned that was a crucial difference, Verstappen wasn’t so sure if that was what swung things. “I think we just did a better job as a team,” he said. “Sometimes that can be worth more than upgrades.”

But just as the team had under-delivered on its potential at the last race, here it absolutely nailed it. Ferrari possibly ran a set up which was a little harder on the front tyres than Red Bull – but maybe not. Maybe it was just that Leclerc pushed a little too hard when leading the sprint race, ensuring he got out of the Red Bull’s DRS reach. The penalty for that was a graining right-front in the closing laps of Saturday’s race which allowed Verstappen to win and put himself on pole. 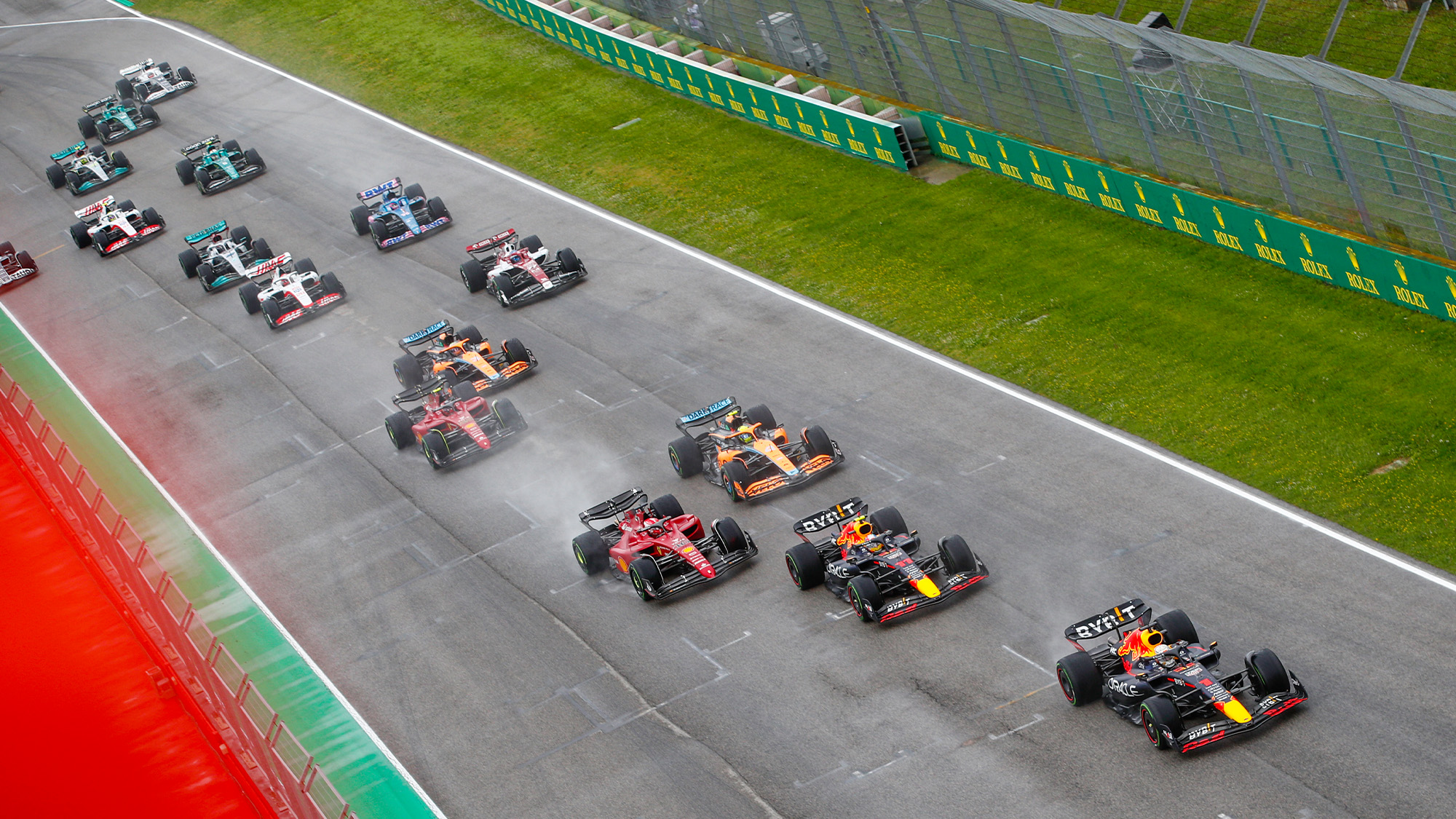 The advantage of pole was magnified massively on Sunday by how much wetter the other side of the grid was.  Everyone on the odd-numbered side made up places, everyone on the even-numbered side fell badly back. So Leclerc was easily passed off the line by Perez – and that was that. Lando Norris also got ahead but the McLaren wasn’t fast enough to hold off a Ferrari for more than a couple of laps. The Red Bull of course was.

Ferrari was nowhere near as off the pace here as Red Bull had been in Melbourne – and may not even have been off the pace at all. Red Bull and Verstappen together did a better job. But Leclerc’s attacking spirit despite a handy championship lead did rather hand it to them on a plate. 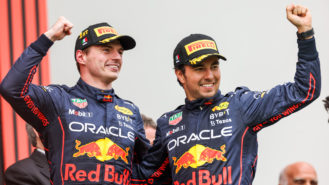 Max Verstappen and Sergio Perez looked in control of the 2022 Emilia Romagna Grand Prix from the off, but Ferrari made Red Bull's day even easier in front of its own Imola crowd

If anything, it appeared as if Ferrari had a small edge as qualifying progressed but the sprint pole was decided in Verstappen’s favour as Leclerc locked up at Acque Minerale as the track was still improving on the last lap of Q3 and Verstappen was clean.

Once Leclerc had then beaten him off the line and pulled away, Verstappen was prepared to settle for second in the sprint, while keeping the pressure on as best he could. To his slight surprise, it paid off as the Ferrari’s front-right soft compound tyre opened up.

The heavy rain from about three hours before the 3pm start had abated as the lights went out, but the state it left the track in pretty much made Red Bull invincible thanks to the contrasting grip off each side of the grid and the slippery surface offline in the braking areas.

Leclerc’s second stop, as well as triggering Perez into a response, also allowed Verstappen a stop for free, releasing him to get a set of new softs and thereby set the race’s fastest lap, ensuring maximum points from this big-points weekend.

Leclerc’s spin then opened up the final podium place to Norris, albeit over half-a-minute behind by the end. 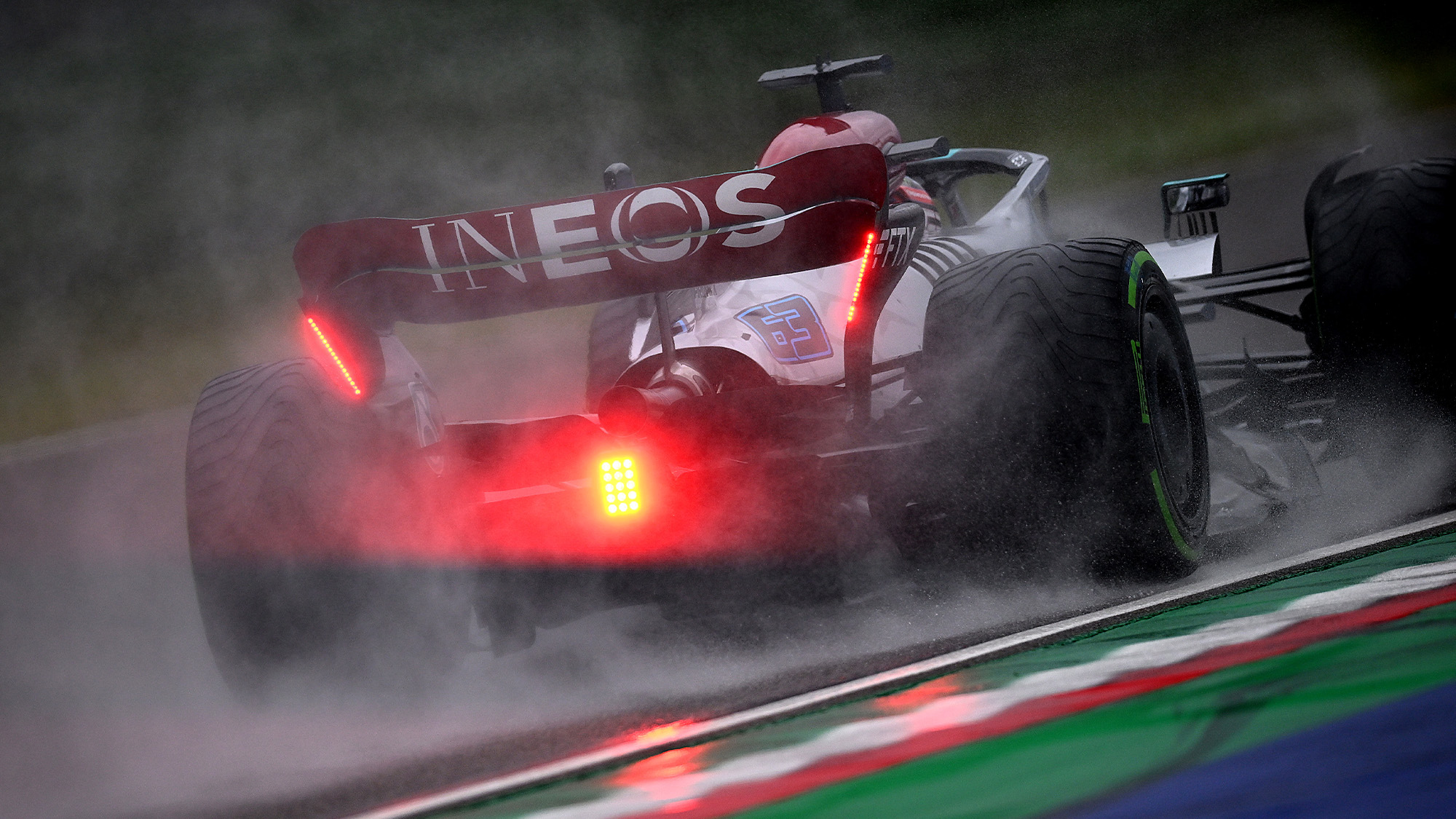 Russell was up to sixth on lap 1, after starting 11th

The grid was mixed up by the sprint races and the red flags of qualifying on Friday, so there were cars out of position. Including the Mercedes pair George Russell and Lewis Hamilton who failed to make Q3. Uniquely, the car needed two warm-up laps for the tyres. They didn’t get them – and so what was supposed to be their first warm up lap in Q2 ended up being their grid time because of a Carlos Sainz-induced red flag and subsequent rain shower.

Had they completed second laps, we’d likely have seen them safely through – but they were no quicker than McLaren or Alfa Romeo. Russell on the grippier side on Sunday vaulted several places from his 11th-place start and picked off another as Bottas was delayed by the Sainz/Ricciardo incident ahead of him. This put Russell sixth and he picked off Kevin Magnussen’s struggling Haas with a ballsy move into Rivazza. Hamilton by contrast, from the slippery side of the grid, was down in the mid-pack, picked off Lance Stroll’s Aston but could find no way by the much faster on the straight AlphaTauri of Yuki Tsunoda. After a delay at the stops (Ocon was released directly in his path) Hamilton was in even worse shape in the second stint, stuck in a DRS train way out of the points. 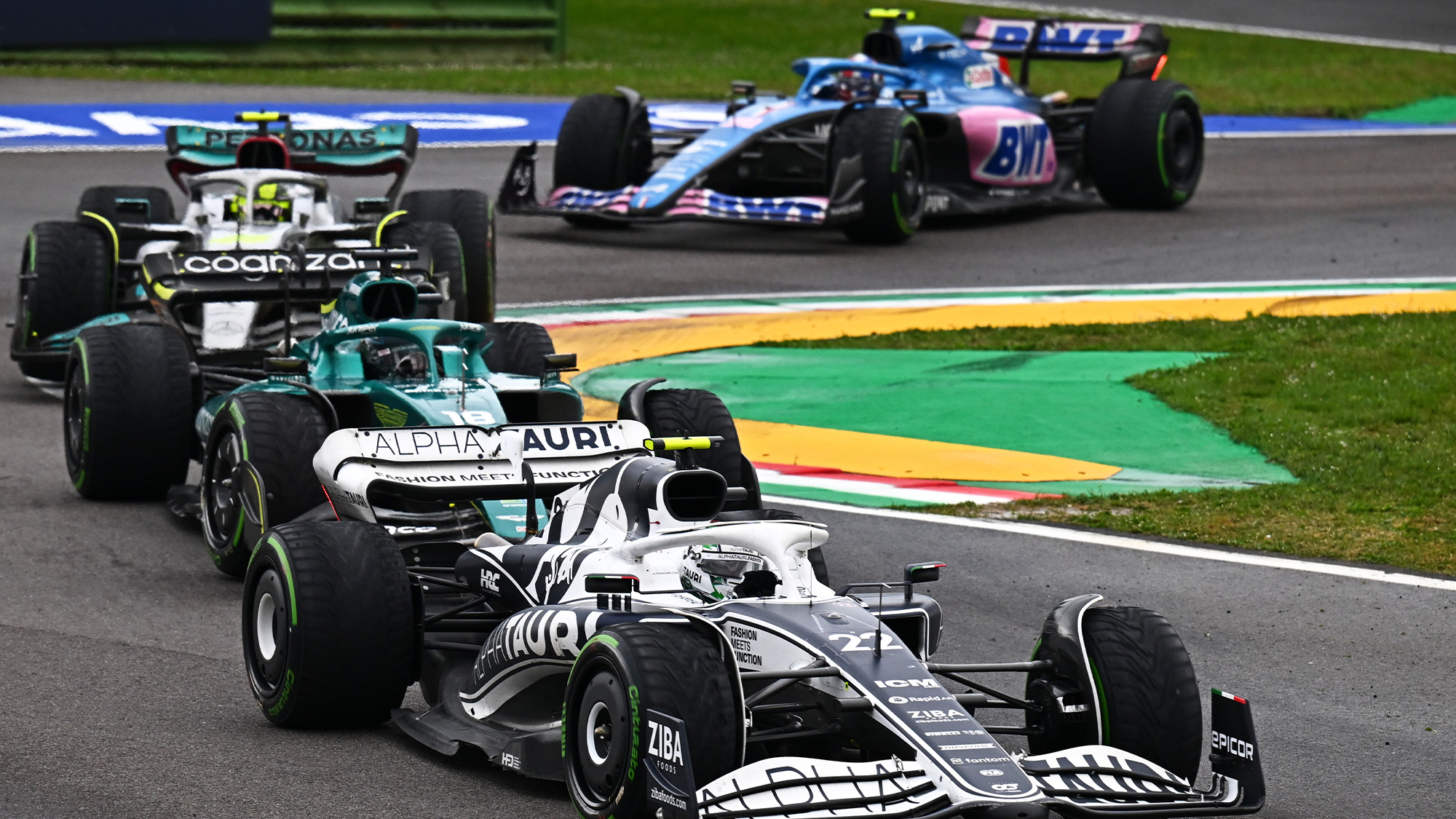 There was no escape from the DRS train for Hamilton

Bottas’s Alfa was probably actually faster than Russell’s Mercedes, especially after Russell didn’t get the flap adjust at his pit stop for the move onto slicks because of an equipment failure. Bottas was delayed by 11sec in the pits (front-right cross-thread) but still was able to mount a sustained attack on Russell, albeit to no avail. Had he been able to pass his replacement at Mercedes, Bottas may even had been capable of challenging Norris for what would have become third. But fifth would have to do – one place ahead of the lead Ferrari.