What the record Austin crowd saw was a brilliantly vivid see-sawing contest between Max Verstappen’s Red Bull and Lewis Hamilton’s Mercedes in which the former prevailed – just.

What was actually driving that picture was Red Bull trying to find a way to express its car’s slightly superior performance around this track on this day, having been demoted down to second in the opening few moments of the race. If it could just do that, it had the pace to win the race. But the window of opportunity for doing that was narrow – and required tactical boldness from the team and supreme judgement from Verstappen. Hamilton, in a Mercedes that was much harder on the rear tyres than the Red Bull, tried to ambush a win from those unfavourable foundations. It was a brilliant performance from both drivers.

After winning the start, Hamilton led the first stint, with Verstappen able to stay tight in his wake but without enough of a performance advantage to pass on track. So any passing was going to have to be done around the pitstops. Around a circuit brutally hard on rear tyres, even a two-stop strategy made for stint lengths nudging up against the limits of the rear tyres. The Red Bull’s better tyre usage gave the team a little more strategic flexibility – just enough for Verstappen to overcome the blow of losing the start after having set a comfortable pole.

Why was the track so hard on tyres? 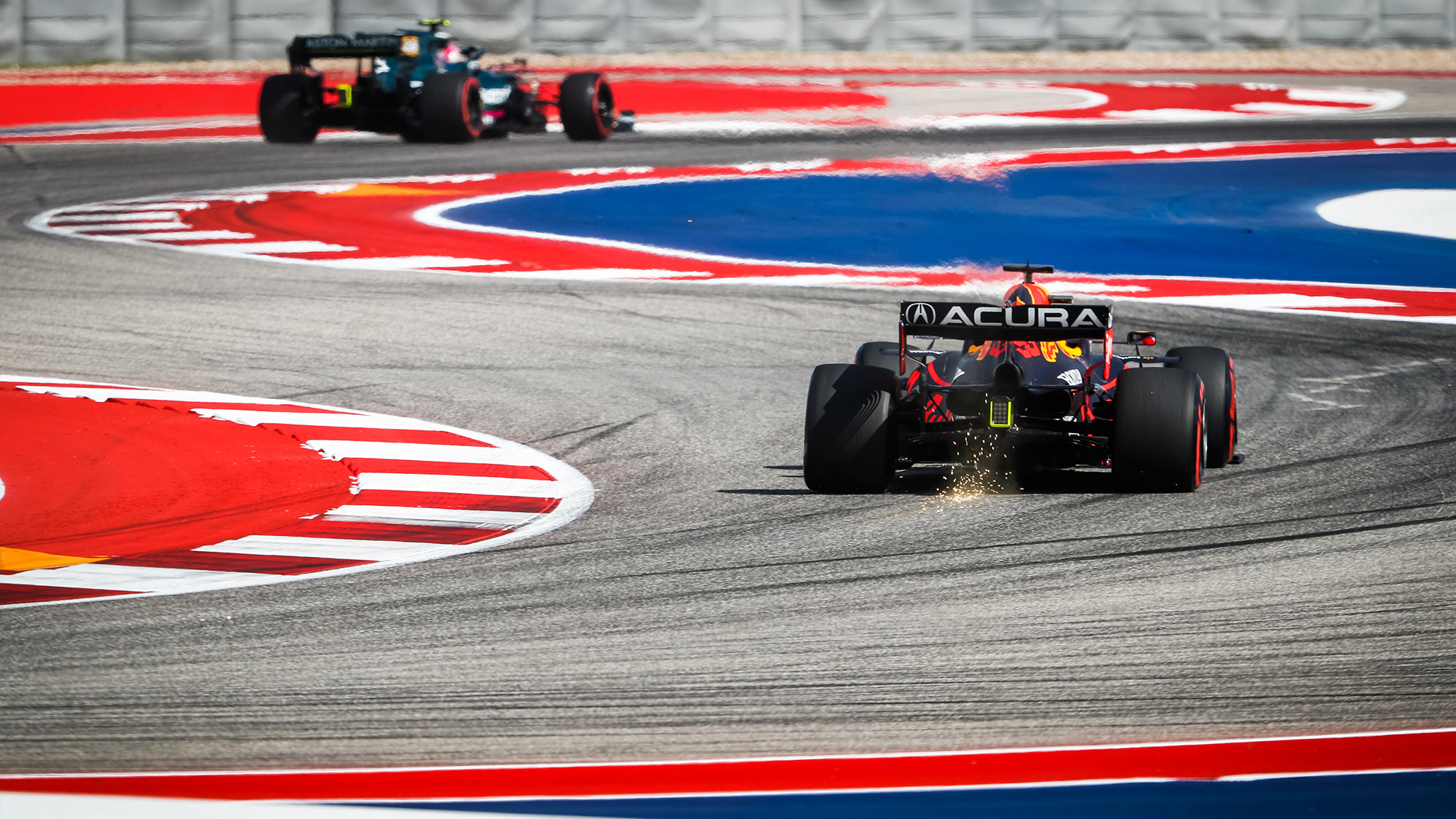 The layout of the track – with the sustained high-speed esses section early in the lap and the long, fast, loop of Turns 16/17/18 near the end – makes it naturally tough on tyres anyway. In both sections, after being asked to sustain high g loadings for a long time the rear tyres then have to be accelerated hard out of low-speed corners. So they don’t get a chance to recover and thermal degradation sets in.

But added to that challenge are the fairly severe bumps which have developed around the track over the last couple of years because of the high plasticity of the soil beneath. Then there was the track temperature on a weekend way hotter than at any previous grand prix around here.

The thermal deg was even apparent over one lap of qualifying on the soft tyre. The Saturday challenge was in balancing how much to take from the tyres through the fast esses section – Turns 3/4/5/6 – with how much grip you’d have left for the final sector. Getting full tyre performance over the entire lap was not possible. You just had to find the optimum trade-off. The more rear downforce the car has, the better that trade-off could be.

In this crucial demand, the Red Bull was a little better than the Mercedes. The Merc retained its straightline advantage, but not by enough to offset the Red Bull’s superior treatment of the rear tyres.

Why was the Red Bull less adversely effected? 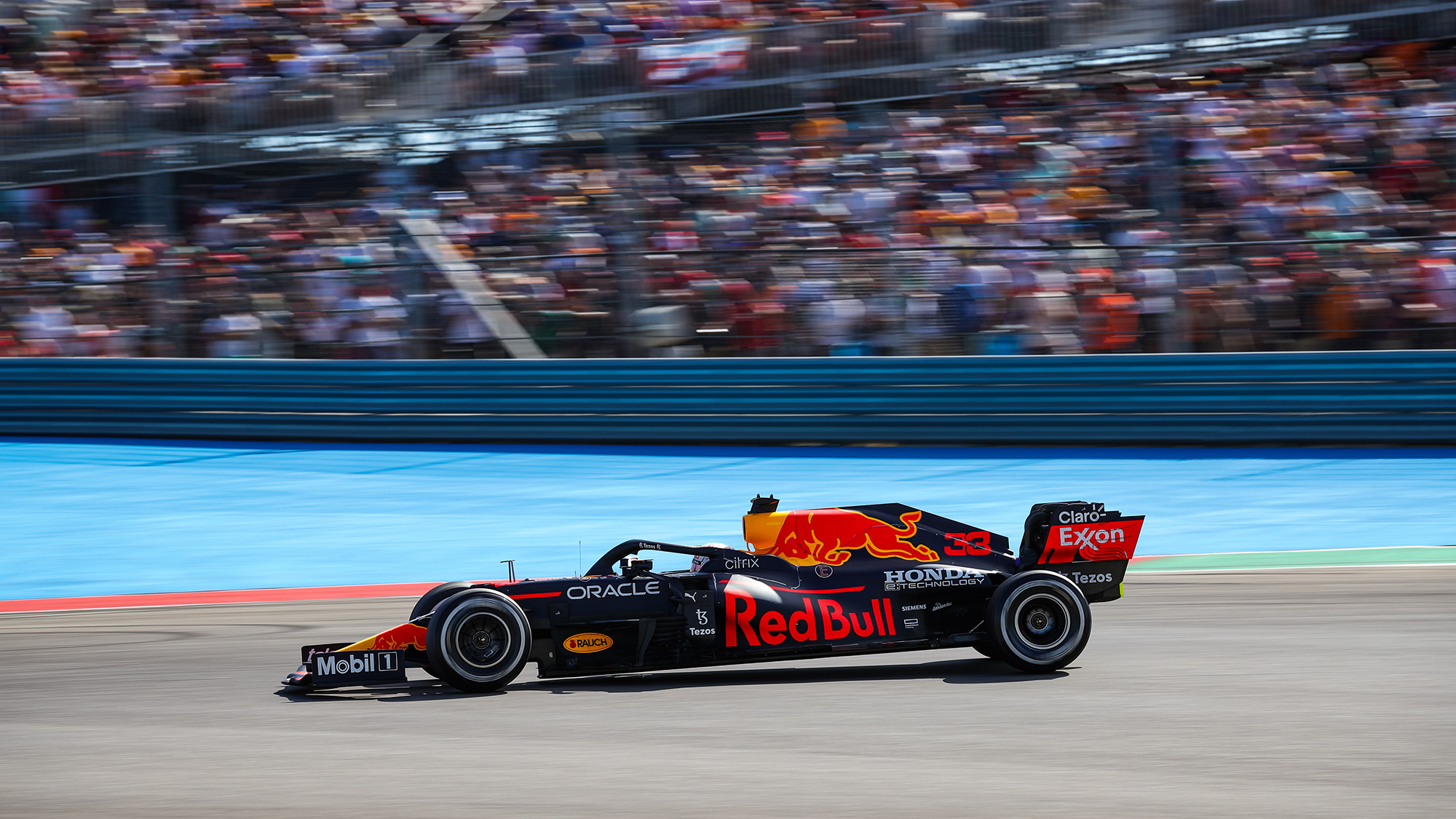 High-rake, high-downforce Red Bull is kinder to its tyres

Partly because of its high-rake concept, the Red Bull has more rear downforce than the Mercedes. So it would slide less and it would damp out the load variations on the tyres over the bumps better. Nothing heats up a tyre faster than being repeatedly compressed and released at high frequency. The more downforce there is to keep those tyres compressed, the lower the frequency, the less they are abused and the lower the temperature.

The Red Bull could more easily be balanced between those first and third sectors of the qualifying lap and on race day it could run a faster pace for a given thermal deg (or keep its tyres in better shape for an equivalent pace). That gave the team greater strategic flexibility than Mercedes.

Could Mercedes have won it?

Hamilton winning the start opened up a possibility of victory. Had Verstappen led away, there likely would have been no real contest. This was as good a race as it was because the slower car on the day had track position over the faster one.

But with tyre deg so high you couldn’t afford to make the stints too long. Which placed a limitation on how early you could make the first stop. Both Red Bull and Mercedes would start on the mediums (having qualified on them in Q2), with the plan then to use hards in each of the remaining stints. But even the hard tyre suffered significant thermal degradation. 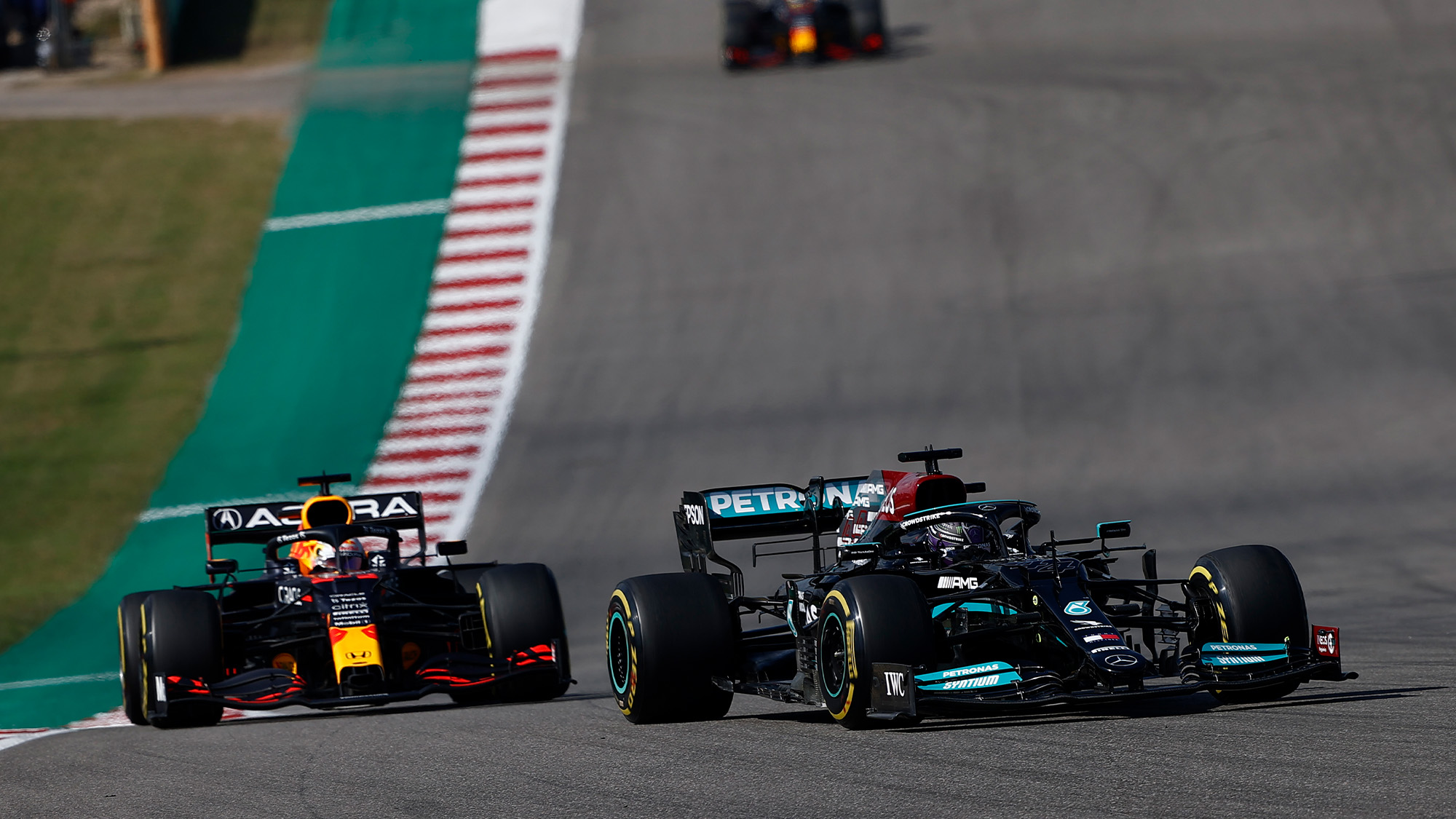 Hamilton’s early lead prevented Verstappen from racing away to victory

For Mercedes to have prevented Verstappen going for the undercut on Hamilton would have required them stopping as early as lap eight. The concern at Mercedes about that was their tyre deg was so high, such an early stop might have forced them onto the definitely slower three-stop. With less tyre deg and nothing to lose, Red Bull pulled the plug on lap 10, switching Verstappen to a set of hards.

But so early was the stop, he hadn’t even cleared the respective fourth- and fifth-place Charles Leclerc and Daniel Ricciardo. He would potentially need to overtake them immediately upon rejoining and if he didn’t the strategy could be ruined if they stayed out for any more than a lap or so. To make the undercut work – to steal track position off Hamilton in much the same way that Hamilton had stolen it from Verstappen in Bahrain – Verstappen had to nail his out-lap and pass Ricciardo. He did both – with Leclerc then pitting out of his way. It gained Verstappen the lead but there would be a price to pay.

Once Red Bull had brought Verstappen in, ideally Mercedes would have left Hamilton out as long as possible, to minimise the remaining stint lengths. Except Red Bull was able to use third place Sergio Perez to apply undercut pressure, forcing Hamilton in on lap 13. He then brought in his fresh hard tyres very gently, lapping around 2.5sec slower than Verstappen had done.

Verstappen’s hard early pace in the second stint – which was absolutely necessary in the moment – was way too much for the rear tyres. It gave him a lead over Hamilton of almost 7sec – but the rubber was now way too hot. Hamilton’s gently-driven tyres were in much better shape and he quickly began closing that 7sec deficit down. So quickly that Verstappen was forced in again after just 19 laps to prevent Hamilton undercutting back ahead. There were 27 to go.

In this way the race ebbed and flowed. 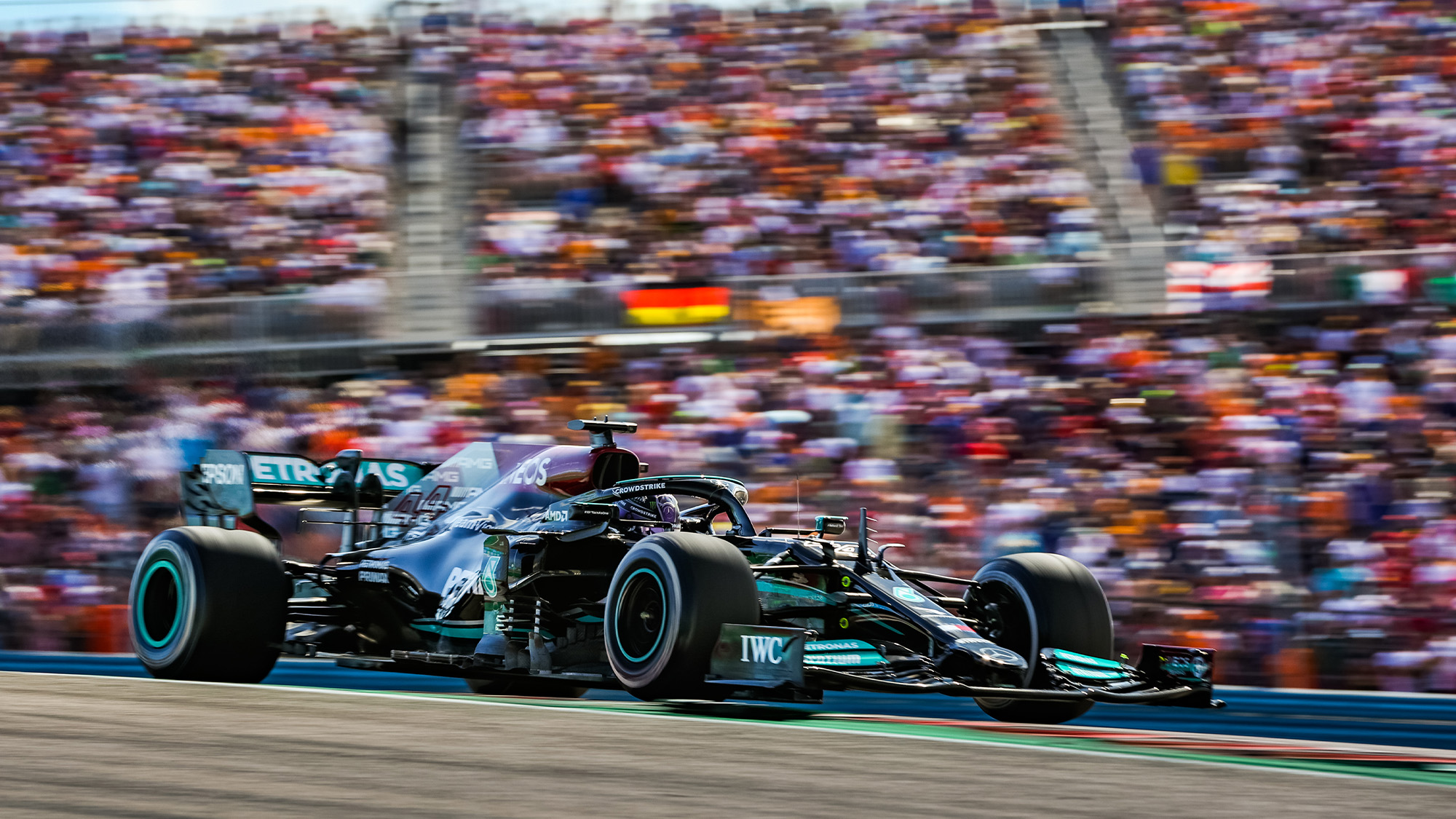 Third-place Perez – without a drinks bottle and suffering terribly, losing strength in his limbs and even struggling with his vision later in the race – had now fallen well back, so Hamilton could stay out for as long as his tyres could take it. That turned out to be eight laps later than Verstappen. He rejoined 8.8sec behind.

Verstappen had not needed to abuse the tyres this time and his final stint task was just to measure out their energy so that they were not dead by the time the newer-tyred Hamilton arrived on his tail. After a couple of gentle easing-in laps, Hamilton now had to let rip and just hope that he still had grip by the time he caught up.

In reality it was a forlorn hope. So long as Verstappen’s tyres didn’t ‘hit the cliff’ and become whole seconds slower, Hamilton was never going to be the 1.2sec faster realistically needed to overtake here. Even his eight-lap newer tyres weren’t going to give him that sort of advantage.

So the closing laps saw the drama of a swashbuckling Hamilton closing down fast on a tyre-conserving Verstappen. But aside from a bit of jeopardy for Verstappen when lapping backmarkers, it was less dramatic than it looked. He had it all under control and now leads the championship by 12 points.