Asking Damon Hill to take a Ferrari Sharknose to Thruxton, getting Martin Brundle to give Jochen Rindt’s Lotus 49 a spin around Brands Hatch, encouraging (actually he probably didn’t need any) Johnny Herbert to hilariously re-enact scenes from Weekend of a Champion via a napkin and shaving foam…

These larks all might sound in the realm of F1 anorak fantasy, but this is the dream day job of Sky F1 Assistant Producer Neil Wooding. He may have fallen into film making by almost accident, but Wooding has since gone on to make countless examples of timeless motor sport documentaries with the help of his team.

Wooding says it’s his “mission” to bring the classic F1 cars he loves into people’s living rooms, and his latest project is a short film – part 1 released this afternoon – on the aforementioned Ferrari 156 ‘Sharknose’.

Today marks the 60th anniversary since Wolfgang Von Trips was tragically killed – along with 15 spectators – in a horrific crash at Monza, thus meaning his Ferrari team-mate Phil Hill became the first American to win the drivers’ championship, doing so in the beautiful 156. Various factors often influence the birth of a new documentary, but this one was all Wooding.

“This was my baby – I’m the the office anorak,” he says. “It’s been a six to nine month project over the winter. I read a fantastic book by Michael Cannel, called The Limit, which is the story of the two drivers. The journey the two of them had gone through, the amount they had to fight even to get into Ferrari, is amazing. In that era there was always a possibility that one of them might pay the ultimate price.”

Wooding was duly inspired – his next project was born.

“I did some digging around and saw that these two Sharknose replicas had been made,” he says. “I got in touch with Jason Wright who owns them.

“We were initially going to take them to the Old Timer Grand Prix at the Nurburgring and drive them from the castle where Von Tripps grew up and drive the down to the track, but then with the floods in Germany that was cancelled.”

Making a piece of film is nothing but pragmatism in a bottle, so Wooding had his back-up plan ready and headed to Thruxton, Britain’s fastest circuit, along with Sky presenters and former F1 drivers Martin Brundle and Damon Hill. 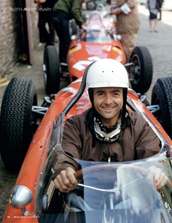 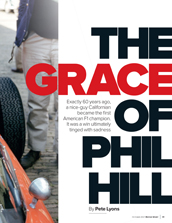 The grace of Phil Hill

This is big boy’s toys and then some.

Wooding says it’s often the small details which really bring the story to life, making it worthwhile not just for himself, but the viewers at home also. The Sharknose at Thruxton was no different.

“You want to inform both the causal viewers and then the more passionate ones like me,” he explains. “You just want people to stand back and go ‘Oh, I didn’t know that,’.”

That the Sharknoses’ story is one laced with triumph, romance and tragedy made it extra appealing for him.

“If all these anecdotal stories, like the fact that just before his death, Von Trips and set up the Kerpen go-kart track, which Rolf Schumacher [father of Michael and Ralf] then took over, or that von Trips was at Damon’s christening in 1961, just a few months before his death, or that Damon spent a summer as a child with Phil Hill – make me, as a fan, go ‘Wow’, then I hope people at home will do the same. “

Wooding notes the significance of driving such a car at Thruxton for both Hill and Brundle.

“Damon holds the unofficial lap record here [he averaged 147.25mph when driving a Williams FW15C at Thruxton’s Silver Jubilee event], and the last time Martin drove here was in his British F3 showdown with Ayrton Senna – in 1983!”

“This was the first Ferrari F1 car Damon had ever driven, so it was special, but he was also amazed. He thought at 1.5l it might be a bit underpowered, but he couldn’t believe how quick and nimble it is, how narrow and agile. He was actually quite moved by how racey the car is. But they’ve got also got no seatbelts. Just driving these things at 170mph really brings home that era.”

Wooding comes from a long production line of Coventry-born petrolheads; his father and both grandfathers working in the city’s car factories. One way or another, it seems he was destined to be involved with cars.

“My Dad got invited to races, and so I went to my first ever car race on my fourth birthday. I was a marshal when I was 15,” he said.

An enthusiastic amateur with a camcorder, Wooding found he never seemed to be too far away from a shunt or incident at motor sport events.

“I used to go to rallies with a camcorder and also seemed to be in the right place at the right time,” he notes. “I’d quite often give films of crashes to [producer] Andy Marriott and he’d put them on his programmes on Sky, but I never thought of it as a career.”

Wooding then decided to take perhaps the more sensible route, until fate intervened to set him on a rollercoaster journey…

“I’d left university and had literally just done a PGCE to go into primary school teaching,” he says. “I then saw this job as a camera operator for World Rally Championship coverage in the back of Autosport. I applied thinking I’d never hear back, but they called me and offered me the job before I’d even left the interview! I needed to let them know there and then as they were flying to Rally Argentina on the Monday.”

Sitting at home leafing through Autosport one moment, roaming the wilds of Argentina – camera in hand – the next, Wooding was left in no doubt he made the right decision, and has since then made a motor sport media career that’s been nothing if not diverse. 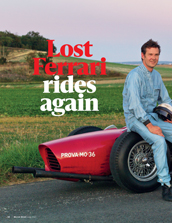 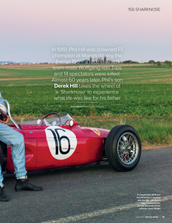 The Ferrari 156 ‘Sharknose’ interrupted the British Formula 1 revolution led by Lotus and Cooper-BRM in the first year of the 1.5-litre engine regulations in 1961 and gave Maranello a…

“I loved the rallying because you’d be so close to the cars, up hill, down ditches – I loved it,” he enthuses. “From there I moved to F1, then went freelance and worked on GT, touring cars, IndyCar NASCAR, went to Sky and now here I am. It’s crazy.”

Having filmed almost countless classic cars in bevvy of exotic locations, you’d think Wooding would struggle to know a favourite. However, when he’s asked to picked out a preferred moment, Wooding doesn’t hesitate.

“One of my favourite shoots ever done with sky was in the Monaco Historique in 2014,” he says. “I flew Damon and Johnny Herbert out of the Spanish GP on the Friday to Monaco and we did an homage to the Roman Polanski – Jackie Stewart film Weekend of a Champion.

“The Hotel de Paris let us have a room for the famous shaving scene, the drawing on a table cloth scene – we made it as if Johnny was going to make a comeback and Damon was going to be his manager.

“It was one of those where you’re like ‘This isn’t a job, this isn’t work, I love this!’

“Johnny got to drive an ex-Chris Amon March and Damon used the very first turbocharged Renault F1 car. They never thought they’d drive round Monaco again. We couldn’t get them to stop!

“These are people I’ve grown up watching and loving their exploits, now I get to work with them. Johnny and Damon couldn’t stop talking about it afterwards. They all love working on the history pieces.”

“We need to let people understand that there is so much motor sport out there!” Neil Wooding

With so much ground covered, Wooding is still not resting on his laurels; he’s already got the next project planned.

“Next year is the 30th anniversary of Nigel Mansell’s F1 title,” says Wooding. “Martin’s getting close to having driven his 60th F1 car, but he’s not done that ’92 Williams FW14B yet.

“There are a couple of ‘Red 5’ ’92 Williams’s out there, but I know one was bought over the winter by Sebastian Vettel. That’s my target for next year: Martin and Seb in ‘Red 5’. I’ll be working on that.”

“We need to let people understand that there is just so much motor sport out there!”