Formula 1’s most experienced driver, Kimi Raikkonen, has announced that he will retire at the end of this season.

A world champion and 21-time race winner, the Finn is set to have entered more than 350 grands prix when he hangs up his gloves.

“This is it,” Räikkönen wrote in an Instagram post. “This will be my last season in Formula 1.

“This is a decision I did during last winter. It was not an easy decision but after this season it is time for new things.”

The Alfa Romeo driver was hailed as a “legend of the sport” by his current team manager who said that he had written “some indelible” pages of F1’s history.

Kimi Räikkönen explains how he made his spectacular F1 debut

Featured in this month's edition of Motor Sport, Kimi Räikkönen explains how he came to make an unlikely F1 debut for Sauber, leading him on the path to grand prix greatness

Räikkönen made his debut for Sauber at the age of 21, having competed in just 23 single-seater races before his first F1 season in 2001.

A points-scorer on his debut, he went on to be poached by McLaren for the next year, where he was runner-up in the title race twice.

A switch to Ferrari in 2007 yielded his championship title by a single point from Lewis Hamilton in his rookie year.

Räikkönen was elbowed out in favour of Fernando Alonso at the end of 2009 and embarked on a rally career, racing for the Citroen Junior team and then with his own ICE 1 outfit.

His best result was fifth at Rally Turkey 2010, before F1 called again and Räikkönen joined the Lotus team for 2012, heralding the famous radio message: “Leave me alone, I know what I’m doing,” en route to victory in Abu Dhabi.

“There isn’t any driver out there like Kimi Räikkönen”

2014 brought a return to Ferrari, this time playing second string, first to Alonso and then Sebastian Vettel.

This spell in red brought one final, popular, win at the 2018 US Grand Prix by which time the Finn was already on the way out to Alfa Romeo — a return to the Swiss Hinwil-based team where he began his F1 career. 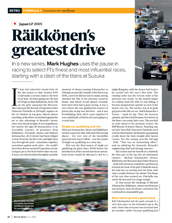 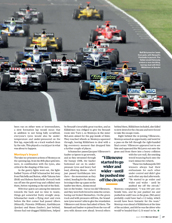 It was the greatest grand prix of the 21st century to date. Suzuka 2005 could make a serious claim to the best of all time. Decided going into the last…

“There isn’t any driver out there like Kimi Räikkönen,” said Frédéric Vasseur, Alfa Romeo team principal. “His presence, his charisma and his unique attitude, matched with the innate skill that made this team give him a chance back in 2001, have made him a legend of our sport in a way which numbers and statistics struggle to convey.

“It was a pleasure to work with him in these years and I believe I speak on behalf of everyone at Alfa Romeo Racing, from the shop floor in Hinwil to the garage here in Zandvoort, when I say a driver like Kimi has written some indelible pages of our team’s, and our sport’s, history.”

Räikkönen has entered 344 grands prix so far, with ten more scheduled in the current season.

“I want to thank my family, all my teams, everyone involved in my racing career and especially all of you great fans that have been rooting for me all this time,” he wrote in his Instagram post.

“Formula 1 might come to an end for me but there is a lot more in life that I want to experience and enjoy. See you around after all of this!”