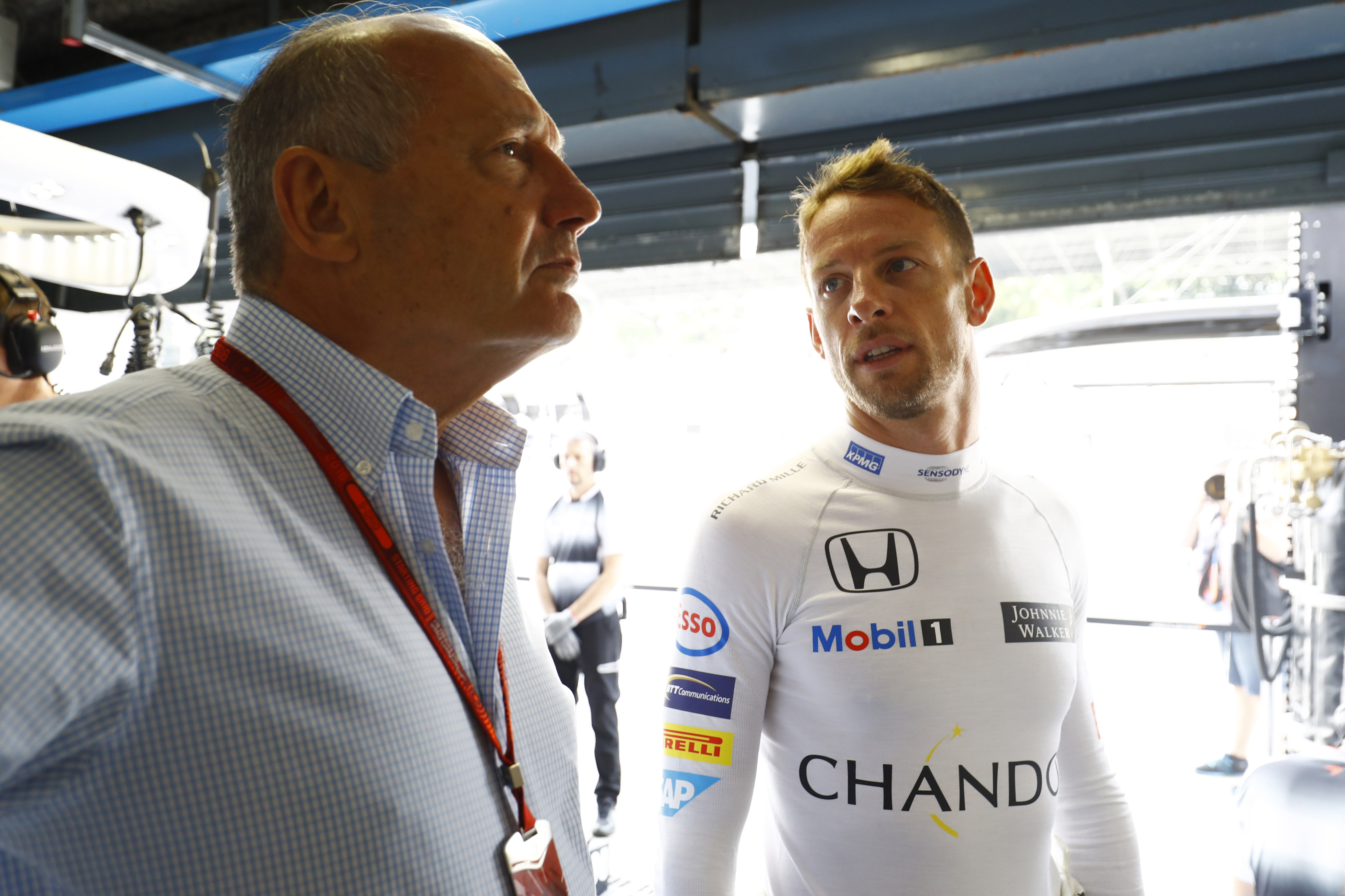 Jenson Button at Monza post-qualifying: “In the summer break I had a pretty awesome time with friends and family – living on my schedule, which is something I haven’t done for 17 years. In Formula 1 there are Grands Prix and everything else is either recovery or preparation. I came to the decision I wanted to initiate talks with Ron in Spa and ever since we’ve been talking about the future and I can tell you I have a two year contract with McLaren-Honda. Next year I will be an ambassador for this team, I will work with this team to make it a better team for the future in every way that I can. I will do sim work, stay current, train my arse off, and also be attending a lot of races. Also doing a lot of stuff I haven’t done for 17 years, get up when I want, do what I want spend more time with my friends and family. I’m also an avid fan of triathlons so I want to do that. I am taking a break for 2017 but for 2018 the team have an option on me to race.”

It’s not necessarily a Button retirement and it’s a clever solution. Three drivers into two McLaren-Hondas didn’t fit. Fernando Alonso’s contract runs until the end of next year, Jenson Button’s expires at the end of this one, and Stoffel Vandoorne is a contracted McLaren driver of enormous potential but who is already 25 years old, six years older than Grand Prix winner Max Verstappen. Vandoorne therefore needs to get his F1 career properly underway. Button is absolutely not ready to retire, is still driving at close to the top of his game, still able to compete hard with Alonso and at the same time combine with him to push the team onwards.

Here’s what Alonso said on the Thursday before Spa: “Next year I finish my contract with McLaren, the one that I have now, so I will have to make a decision if I continue in F1 or not. I think in the last couple of years, especially with this turbo engine era, the car is a little bit different to drive. I don’t say that it’s better or worse, everyone will have his opinion. I’ve been lucky enough to drive 2003 cars, 2004, 2005, even until 2009 the cars were, in my opinion, more extreme, more F1 cars, so now when I see GP2 running three seconds away, or something like that in FP1 it feels a little bit sad. Cars are heavy. No grip. We save fuel, we save tyres, we save everything from lap one, so it’s a little bit against the instinct of the driver and next year is a big question mark. I think with the new regs everything will change a little bit. I think if the cars are fun to drive, are exciting to drive, I will probably stay longer and I will drive for more years in F1. If the cars are still giving me the feeling that I have in the last couple of years, probably I will stop. But it’s not related to whether you are competitive or no, if you are out in Q1 or winning a championship. It’s just you are enjoying driving the cars or you are not enjoying. Right now, in my opinion, the cars are not enjoyable. Probably because I drove other cars. If you arrive now to F1, these cars are very fast and very fun to drive – but not for me anymore.”

So, if you are McLaren and you have Button keen to keep going, Alonso talking about stopping a year and a bit from now and Vandoorne straining at the leash and with other teams ready to snap him up if you don’t provide him with an F1 drive by a certain time, what you going to do? Well, you could do much worse than offer Button a two-year contract as a reserve driver and team ambassador but with the option – on your side – of re-engaging him as a race driver in 2018. That way, should Fernando decide he’s had enough, you have a plug-in super high-quality replacement. 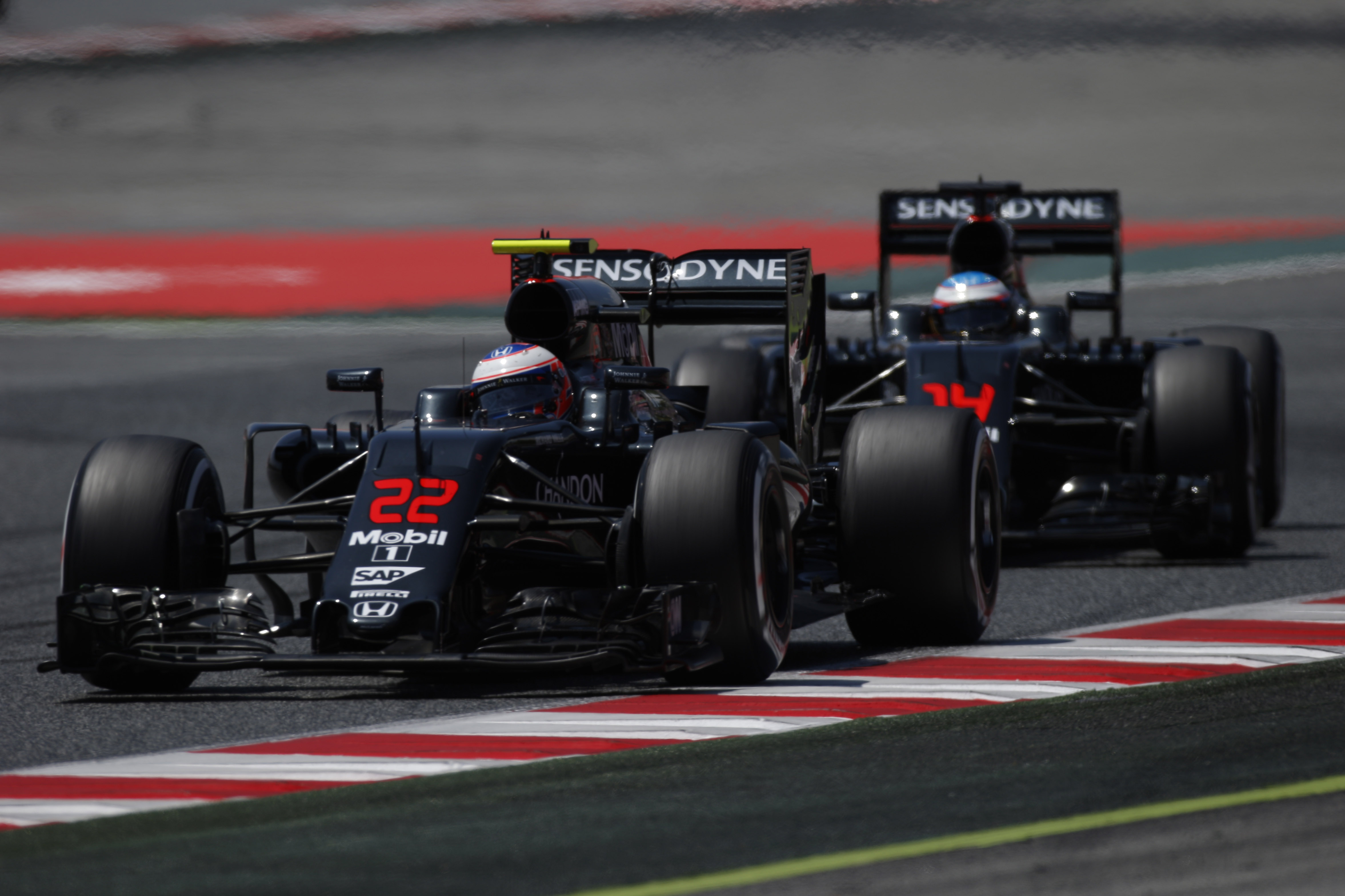 What if another team could offer him a race seat in ’17? That’s where he was at with Williams. But there’s a kaleidoscope of reasons why that didn’t happen, among them his salary demands and his expectation of competitiveness. JB wasn’t sufficiently convinced of either, whereas there is real cause for excitement at the coming prospects of McLaren-Honda. The money reportedly being spent by Honda is immense, the programme is now on the correct trajectory and next year’s engine is essentially all-new in concept and very much in line with the standard-setting Mercedes. With reference to the feature on this website earlier in the year questioning whether the Honda zero size concept was already obsolete, the answer seems to have been ‘yes.’ The big advances made by Honda in energy conversion from mechanical to electrical and back has made feasible a much bigger turbo than could possibly fit between the engine vee. Next year a bigger turbo comes, probably along with the TJI ignition that the other units are now running that is believed to bring major combustion efficiency gains. The horsepower increase for Honda into 2017 should in theory therefore be greater than anyone else’s.

Furthermore, the new bodywork regulations are based around McLaren’s concept and not the competing ones of Williams or Red Bull. They at least begin with a head-start.