Bruce McLaren Motor Racing Ltd made its race debut half a century ago. In 10 short weeks thereafter it experienced the gamut of its glorious but gladiatorial era. Not only did it prove entirely capable and absolutely worthy of championship honours – but also it suffered a tragedy that would have tested the resolve of a far more established outfit. 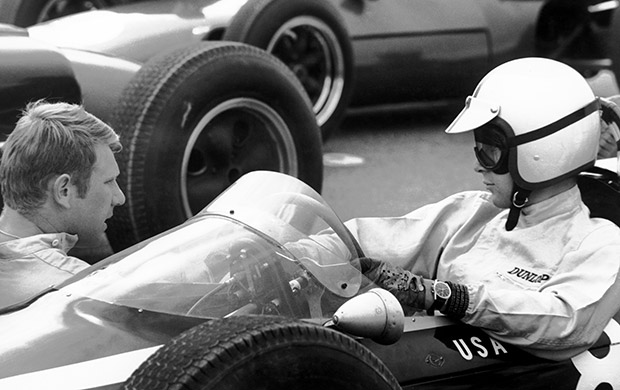 Twenty-five-year-old Timmy Mayer was in a good place in January 1964. Although outgunned BMC engines had blighted his preceding season of European Formula Junior with Ken Tyrrell’s works Cooper squad, his ability had shone through and Formula 1, alongside Bruce McLaren at Cooper, beckoned.

McLaren, not quite six months older but vastly more experienced, wasn’t so buoyant. He knew that the team for which he had contested Grands Prix since 1958 was in danger of sinking. Without the buffering enthusiasm and mechanical and financial wiles of son John Cooper, injured and knocked back by a road accident aboard a twin-engined Mini, the team’s tightfisted founding father was strangling innovation.

Bruce wanted new cars suited to the 2.5-litre regulations of the inaugural Tasman Series; Charlie Cooper saw no need. Bruce wanted Timmy for his team-mate; Charlie threatened to can the programme if the American’s relatively low profile compromised start money.

Irked by this blinkered attitude, Bruce went it alone. Although the cars were constructed in a back corner of Cooper’s gloomy Formula 1 ‘facility’ in Surbiton, the mechanics who put them together – New Zealander Wally Willmott and American Tyler Alexander – were employed by McLaren and co-founder Teddy Mayer, Timmy’s elder brother. 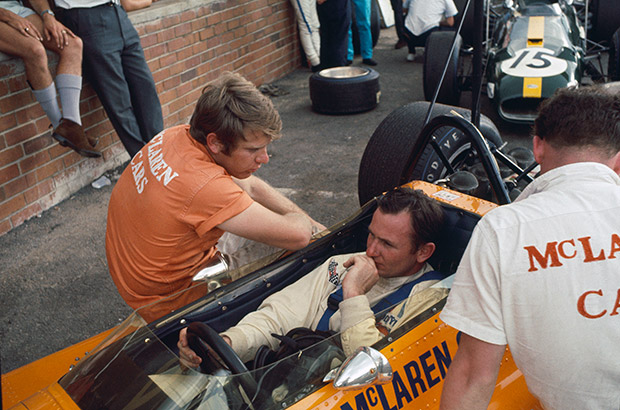 The Redford-esque Alexander, a Massachusetts native trained in aeronautical engineering, had during 1962 worked with the Mayers in the Rev-Em FJunior team they co-created with fellow Cornell alumnus Peter Revson. Timmy, despite Army commitments, dominated that year’s SCCA Championship.

“I’d done a few things with them before that, too,” says Alexander. “But for 1963 they disappeared to Europe and I was left wondering what to do. Fortunately, Mr [Roger] Penske, a good friend, arranged me a job in Houston with John Mecom’s team. We ended up taking its Zerex Special to Brands Hatch for a sports car race in August 1963. It was there that Teddy, who was running a Cooper Monaco for Timmy [Penske won and Mayer finished third], asked if I’d help build a Tasman car. I said, ‘That’s okay. But what the hell’s a Tasman car?’”

He got the job.

Adapting to the new cars

The resultant machines featured a short-stroke version of Climax’s 2.7-litre ‘sports car’ four-pot, a narrower, stiffer centre section and smaller tanks, plus the radius-rod rear suspension designed for a stillborn monocoque F1. (Another bone of contention for McLaren.)

The prototype ran in September and Mayer had a brief shakedown at Goodwood in November. Easily the fastest car he had driven to date, he adapted impressively. 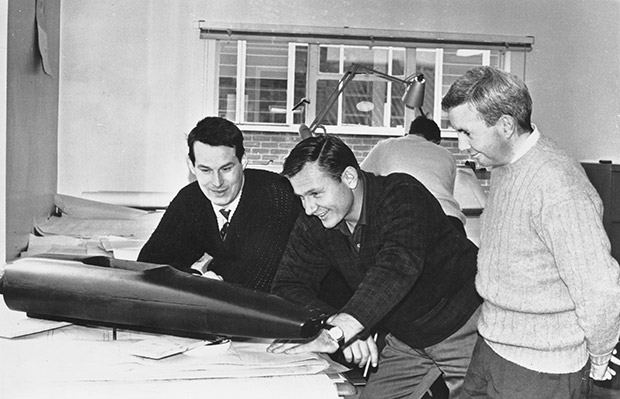 The cars were crated and shipped to New Zealand. Alexander, meanwhile, travelled to December’s Nassau Speed Week, and oversaw Timmy’s class victory in a Lotus 23, before undertaking, along with Willmott, the long haul to New Zealand: Miami, LAX, an overnight stay in Fiji, Auckland.

Mayer, who had also won his class at Laguna Seca in October – another transcontinental epic for the industrious Alexander – continued his good work at the opening Tasman round held on the first Saturday of the New Year. Three-tenths slower than McLaren during practice on the short, bumpy Levin circuit, he finished second, having led the older Brabham BT4 of eventual winner Denny Hulme in the early stages. Such fast starts were soon a fixture.

At Wigram, he qualified fastest of the Coopers and led his heat until he left the road and damaged the suspension. Hampered by a throttle problem, he finished eighth in the final as McLaren won again.

Bruce made it a hat-trick the following weekend, at Teretonga, a circuit that had been kind to him throughout his career, but Mayer finished a close but dutiful distance behind after a dominant, showboating 1-2 performance by the team. 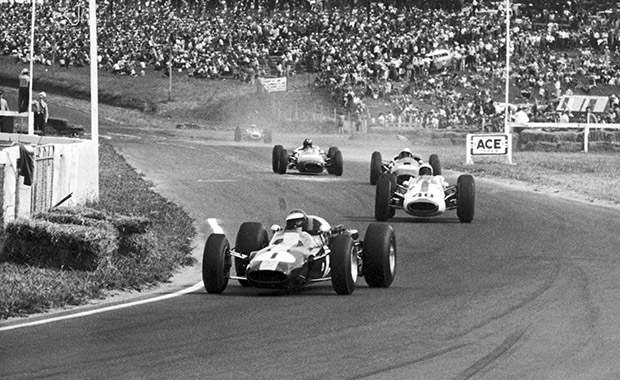 The Tasman Series at Teretonga

The Australian leg of this 10-week championship was not so kind to them. Jack Brabham had contested only two races in New Zealand – Pukekohe and Wigram – but now he became a full-time participant and promptly won three on the bounce: the Australian GP at Sandown Park, plus Warwick Farm and Lakeside.

A second place (ahead of Mayer) at Warwick Farm and a third at Lakeside confirmed McLaren’s title, but it was birthday boy Mayer who took the fight to Brabham’s BT7A at Lakeside. He was leading and pulling away when the engine threw a rod after 15 laps.

There had been no haggling over start money: Mayer had been warmly received as a top-flight racer. His greatest test, however, lay ahead: the 4.5 miles of Longford, Tasmania, a road circuit defined by hazards: a brick viaduct, to be threaded through; a wooden viaduct, to be traversed; plus a level crossing and humped bridge.

Alexander: “We drove from Brisbane to Melbourne with just one stop, if you can imagine that. We had two station wagons full of parts and pulling a trailer each, as well as an open station wagon that acted as a truck for the engines and gearboxes. I can’t remember exactly how Bruce, Timmy and Teddy travelled yet they always turned up – and were always looking for opportunities to water ski. 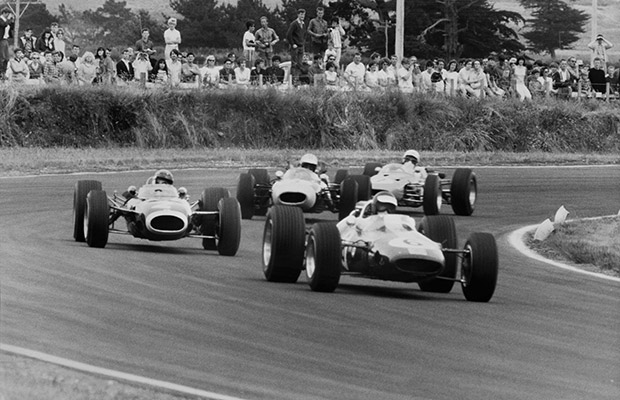 “They were staying at the same places as us. There was nothing flash about it. It was hard work but there was a lot of humour. That’s how Bruce operated. Charisma poured from him, but he never used it in an ego sense. You worked with him not for him.

“We changed the engines in Melbourne and boarded the boat to Tasmania.”

The race at Longford

There, Mayer was just 1.8sec slower than Brabham in Friday’s first practice session for the South Pacific Trophy. Confident of an improvement after a change of gear ratios before the second session, he got out of shape over King’s Bridge and plunged into trees at more than 100mph.

Some witnesses alluded to a possible problem at the rear of the car. Aussie rival Frank Gardner, who warily listed Mayer in the “balls and eyesight” category, reckoned he had simply overdone it: a leap too far the day before Leap Day.

“I don’t know about that,” says Alexander. “We could have put that car together blindfolded so much had we worked on it during the previous weeks. And actually, Timmy was okay in it. He was a smart guy [a Yale graduate] who got better at every race. He was learning all the while. A couple of times he had finished only a few feet behind Bruce. I suspect he could have made a more determined effort to get by, but undoubtedly Bruce would have been able to respond. 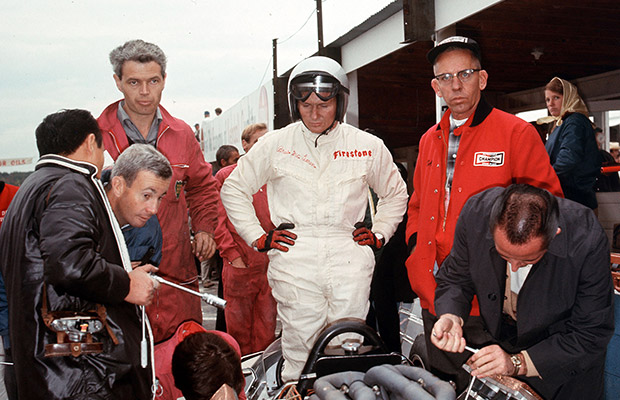 “There was no gut feeling about him not coming round. We didn’t expect him to crash. There had been no problems up to that point. He had been very consistent all Series. That hump in the road had never caused him a problem before either. Maybe he was going faster now we that had changed the ratios. All we know was that he had been quick, if not the quickest, when it happened.”

Whatever the reason – the wreckage was beyond inspection – the impact was unsurvivable.

Bruce withdrew from practice and skipped Saturday’s saloon car heat. Though the title was already his, he did, however, contest Monday’s main event. Starting from the back, he finished a sombre second behind Graham Hill’s Brabham BT4.

“Bruce wasn’t selfish, but he had done that for himself, because he was a racer,” says Alexander. “He wasn’t fiddling around, he was driving that thing as fast as it would go. What that showed me was that he was a gutsy guy.”

There was no question that McLaren the driver would continue. Could the same be said for his nascent team?

Carrying on after tragedy

“The evening after Timmy died we all went back to the hotel,” says Alexander. “There were four or five of us, including Timmy’s wife Garrill, a gutsy girl, nice and smart. And we just got stuck in, did what we had to do. We flew to New York via Sydney and spent two days at Teddy’s mother’s house, Happy Apple Farm, explaining to a group of grieving people, family and friends, where Tasmania was and what Timmy was doing there. 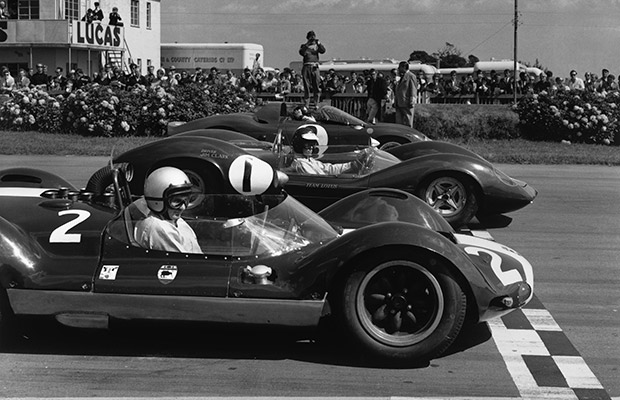 McLaren in the Zerex Special at Goodwood

“People still ask me if Teddy and I discussed stopping. I guess the answer to that is this:

“He and Garrill went skiing in Vermont to get away from it all, and rang my parents’ house to invite me; Garrill wanted to teach me to ski. One evening, black and blue from my falls and holding a nice glass of single malt, the telephone rang. It was Bruce. He wanted to ask Teddy if he thought he should buy the Zerex Special and do some sports car races in England. Teddy said, ‘Tyler’s here!’ and handed me the phone.

“I returned home and then drove non-stop to Pensacola, Florida, to pick up the car and trailer it to New York. The following weekend we were racing it at Oulton Park.

“There is no reason that Timmy wouldn’t have wanted us to carry on. None.”

Once Teddy had tied the legal loose ends in America, he joined Bruce and Tyler in the UK and imparted his shrewdness, organisational skills and bad-cop cussedness to help them create a team that his talented brother would have been proud of and would have given him every opportunity to succeed.

“Denny Hulme came along and the ‘Bruce and Denny Show’ worked extremely well, you’d have to say,” says Alexander. “But had Timmy lived I would not have been at all surprised if it had been the ‘Bruce and Timmy Show’.”