Roy Salvadori knew his limitations. He’d come close enough to death – (eventually) flung from a somersaulting Frazer Nash Le Mans Rep at Silverstone in 1951 – to realise that chases of Stirling Moss at circuits like steeply cambered, high-banked Dundrod or Pescara, its blind bends and flat-out blinds linked by a surface polished to a semi-precious sheen by the harsh Abruzzo sun, were fruitless verging on suicidal. He hated Dundrod and felt lost at Pescara.

Though he wasn’t alone in that, it was Roy who became known as ‘King of the Airfields’. Certainly, he piled up the wins at Silverstone, Snetterton and the like; and if he got his claws in you at such venues, you knew about it no matter whom you were. Handsome like a matinée idol, charismatic and eloquent, ‘Salvo’ raced with all the tough nut tenacity befitting of a man who had made good in the shady cut-and-thrust of second-hand car dealing in the immediate post-World War Two period. (One of its big wheels was stabbed, dismembered and scattered from an aeroplane: head and legs in the English Channel; arms and torso in the Essex marshes.) 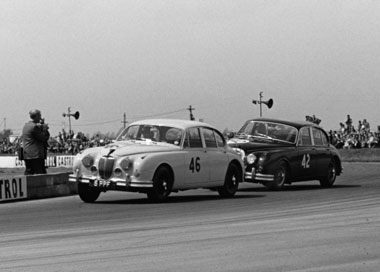 That half-sniffy royal epithet was too narrow, though. Roy twice won Oulton Park’s Gold Cup – and there were plenty of adjacent trees to hit there, plus there was a lake to plunge into, which he did once aboard a Jaguar MkII 3.8 saloon. Nor was the Mulsanne Straight at night a place for the inaccurate or nervous – and he scored his most notable success at Le Mans, in Aston Martin’s sensuous DBR1/300 in 1959.

Salvadori’s association with transmission/tractor magnate David Brown’s Ford Forest Green, Feltham-built sports cars, GTs and F1 underscored his career: he joined the team in mid-1953, and would label his 1963 defeat of Ferrari’s 250GTOs at Monza in its Project 214 as his favourite victory. But Roy was a prolific gun-for-hire too, one of the always willing, reassuringly capable all-rounders that illuminated the era.

His ambition thwarted by WWII, he was 24 and in a hurry by the time he began competing in 1946 in an MG and an ex-Brooklands offset Riley racer. Next came Tazio Nuvolari’s 1935 German GP-winning Alfa Romeo Tipo B – nothing could be more fitting for a blade coursing with Italian blood – followed by an ex-Prince Bira voiturette Maserati 4CL. He learned his craft, however, in less august machinery: Healeys, Jags, ’Nashes. 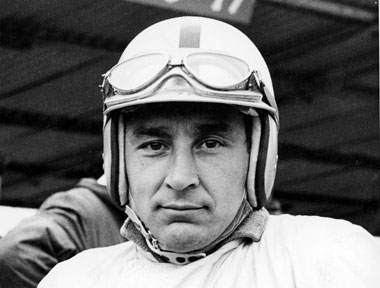 Determined to pursue a professional driving career, he returned to racing mere months after his Silverstone wallop. In 1953, he joined Connaught – a short blat down the A3 from his Elmbridge Motors showroom in Tolworth – and impressed with his aggressive press-on attitude in its F2 single-seater. He also finished second in the Nürburgring 1000km in an Ecurie Ecosse Jaguar C-type shared with the immaculate Ian Stewart. This Salvadori chap was clearly a driver of many parts.

His performances in Gilby Engineering’s Maserati 250F, particularly in the 1956 British Grand Prix at Silverstone, when only the similarly mounted Moss shaded him and a possible victory was lost to a broken fuel tank strap, marked him out as a potential top-notcher.

That World Championship GP win never came, however: he was catching the Lotus of eventual victor Innes Ireland at Watkins Glen in 1961 when his Yeoman Credit Racing Cooper’s engine let go. This gap in his CV was indicative of Roy’s F1 career path as well as his standing in a British pecking order packed with cockerels: the Connaught was unreliable over a GP distance, BRM’s P25 spooked him and he didn’t click with the Vanwall; he joined Cooper – just around the corner from his showroom – too early and Aston Martin left it too late. 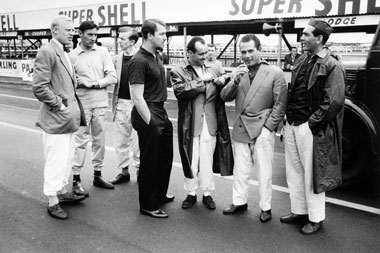 Having shown that a Cooper fitted with a fire pump as opposed to a motorbike engine was the future of F1 – fifth in the British GP of 1957 (above); fourth in Holland, third in Britain, second in Germany and fifth in Italy in 1958 – his loyalty to AM’s much-delayed and increasingly old-hat, front-engined DBR4/250 caused him a step back. He finished second in the 1959 International Trophy at Silverstone and started from the middle of the front row at Aintree’s British GP – but these performances were unrepresentative and his momentum was squandered. By 1962, which began with a nasty accident in a Cooper at Australia’s Warwick Farm, he was a bit part player at this level, though there was no shame in being overshadowed by team-mate John Surtees in Bowmaker Racing’s Lolas.

Sports cars, in truth, were his métier. With co-driver Carroll Shelby crooked by dysentery, Roy – fast and consistent – did the lion’s share at Le Mans in 1959. The following year he allowed a mercurial Jim Clark sufficient scope to express himself and yet provided enough wise counsel for them to finish third in Border Reivers’ DBR1.

As he had been with Cooper’s fattening single-seaters, so he was at the forefront of the two-seaters’ switch to mid-mounted ‘big banger’ engines. He cut a successful swathe in 1963-’64 at the wheel of the Cooper Monacos of CT ‘Tommy’ Atkins’ High Efficiency Motors – just across the A3 from his showroom – and did a lot of the development driving of the nascent GT40, still on its singing wire wheels.

But another spectacular shunt had set his mind a-wondering. His Lightweight E-type spun on oil at Le Mans in 1962, piled in backwards and ejected its ‘lucky’ driver – no broken bones but agonising bruising – through its rear window before catching alight.

The end was clearly approaching, and it arrived in stages: Roy called time on his single-seater career at the end of that season – and on all competition driving in early 1965. He then smoothed Chipstead Motor Group’s purchase of Cooper and saw the team through the choppy waters of the new 3-litre F1 in 1966-’67 as its urbane manager. And that was that. 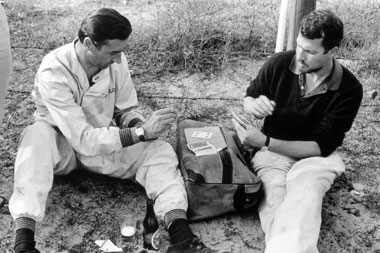 For 20 years he had been at the hub of Britain’s rise to motor sporting prominence and then dominance. Yet he was just as at home in his retirement flat overlooking the start/finish line in Monte Carlo. Hosting friends/rivals, telling and sharing stories, he was genial, approachable and engaging. That illness gradually stripped those memories from him was cruel in the extreme. It might, therefore, be of some comfort to his wife Sue to know that suave, swift Roy Francesco’s 90 years, indubitably well lived in the main, will long be remembered.