It has always interested me whether a great racing driver can be taught, or whether he must have some special natural talent. I suspect it is a mixture of the two.

It might be useful to look, briefly, at the careers of Graham Hill and Lewis Hamilton, world champions forty years apart. Did they have a gift from on high, or did they simply keep grafting until they got there?
These two men won the ultimate prize in very different eras. And they achieved their dreams by following very different paths. 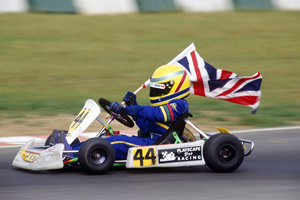 Lewis Hamilton won his first world championship when he was 24 years old, the youngest champion in history. Graham Hill did not sit in a racing car until he was 25, having only just passed his driving test. But this does not tell the whole story.

It is often said that Hill was not a naturally gifted driver, that he had to work at it, and that he achieved his success through sheer guts and determination. This implies that the gifted, as Hamilton surely is, do not have to work so hard. But there is much more to this than immediately hits the eye. 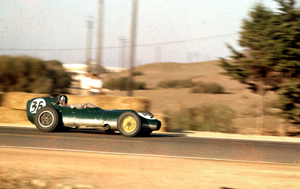 Interestingly, it took Hamilton 16 years – from the time he first raced a kart – to reach his goal at Interlagos in the autumn of 2008. Hill raced a car for the first time in 1954 and made his Grand Prix debut in Monaco just four years later. Then, four years after that, he was World Champion for the first time. Despite being a late developer, he made it to the top in short order, going straight into Team Lotus before joining BRM where he won his first ever Grand Prix in the same year that he took the title. Impressive, when you consider that he started out with no money, no sponsorship and precious few contacts. 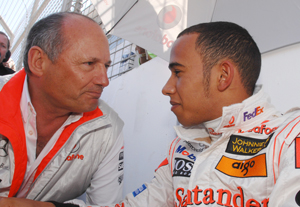 Hamilton was not exactly born with a silver spoon in his mouth, but he did have an ambitious, and hard-working, father who devoted his waking hours to providing Lewis with an environment in which he could thrive. Once into karting he started winning races and championships, climbing steadily through the ranks and meeting Ron Dennis along the way. This was a pivotal moment. Graham Hill had met Colin Chapman but he was a grown man at the time, not a child, and Chapman’s idea of a ‘scholarship’ was to get Hill working as a mechanic (below) before putting him behind the wheel of a Lotus. Once in the cockpit, his rise to fame was more rapid even than Hamilton. The notion of ‘overnight success’ is simply a convenient tag line invented by the media 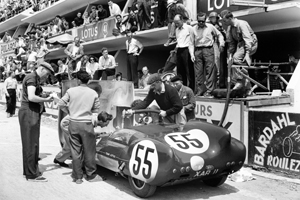 You might say that both these men would have made it anyway; such was the drive, ambition and application that they brought to bear on the task. But that is not the full story.

From the moment that Hamilton charmed a phone number out of Ron Dennis, he was on his way, sponsored and signed up to some very influential people. All he had to do was keep on winning races and, for him, that was the easy bit. That was the talent, the gift.

For Graham Hill, who began life as an engine room artificer in the Navy followed by a stint at Smiths Instruments, the path to glory was always a struggle, a test of his wits and dogged determination. But as soon as he got his hands on the BRM P57 in 1962, he won first time out. Hill went on to win the title emphatically, beating Jim Clark in the new Lotus 25. He won the Indianapolis 500 in 1966, another F1 title in 1968 and the Le Mans 24 hours in 1972, the only man ever to win this ‘triple crown’. And that’s where the talent came in, that was the easy bit. Nobody wins the Monaco GP five times without a fair degree of talent. 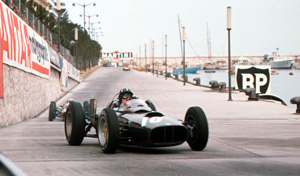 And it goes on. His son Damon won the world championship, the only son of a former champion to achieve this feat. Don’t tell me the talent came from his mother.