The white Martini Brabham BT44B sat there looking as gorgeous as it ever did in the top paddock at the Goodwood Festival of Speed last weekend. There were gems aplenty surrounding it, of course, and picking favourites is entirely subjective – but when push comes to shove, this is probably mine. It was Carlos Reutemann’s too, according to the man who came up with its signature triangulated form.

Gordon Murray is bubbling with schoolboy excitement when I bump into him in the top paddock on Friday morning – but admittedly not about his beautiful BT44. When I ask him what he is driving, he opens his overalls to show me the T-shirt underneath, featuring a funny little orange racer. The IGM T.4 was a Formula 750 Murray built, but never finished, when he first came over to the UK from his native South Africa. And there it is, sitting next to the Brabham – an incongruous pair if ever there was.

“Nobody has ever seen this before,” says Gordon with a wide smile under that famous ’tache. “It’s 49 years old. We bought it back, it’s the original car and it’s just been restored. It weighs just 280kg. It was the first car with rod-operated suspension, push and pull rod. Everyone always says that the Brabham BT44 started that trend, but that’s the one.”

I draw him back to the F1 and the name that has clearly been added to its flanks in tribute: ‘Carlos’. Think of Reutemann and a Ferrari 312 might spring to mind, or a Williams FW07C… probably not a Lotus 79 and most definitely not a Lotus 80, which he hated… but more likely it will be in one of these. Murray caught ‘Lole’ at his best – even if it wasn’t every week.


“He was lovely, a real gentleman,” Murray recalls of a the 12-time grand prix winner who died earlier this month after a long illness, aged 79. “Very not South American in a way. I’ve had loads of South American drivers over the years: Carlos Pace, Emerson Fittipaldi, Ayrton Senna, Nelson Piquet – and they were all quite fiery. Reutemann was very laconic, laid back. Very intense, but in a calm way. Next to Jack Brabham, he was the most laid back driver I ever met. But unbelievably talented.”

Moody and magnificent is the old Reutemann caricature, a sensitive man who didn’t quite have the mentality to string together the performances he needed to win the world title his clear and obvious talent deserved. “That was just a mentality thing,” says Gordon. “He had natural talent. Of the drivers of that period he was in the top four or five.

“He had this temperament where everything had to be right in his head, but when it was right… On the day, unbelievably quick. And the 44 was his favourite little car. On a quick circuit, when his head was in the right place, untouchable. And a very nice guy in between races as well. He absolutely lived and breathed Brabham, he was a real family member.”

Intensity was key to the Reutemann make-up. Gordon smiles again. “When a 44 came back the guys in the workshop would immediately get it on high stands, wheels off and start stripping it,” he says. “Carlos would sit in the car for four hours while they dismantled it around him. Just sit there.”

It must be said, ‘Lole’ was also incredibly handsome. For me, the looks, glares and brilliance undermined by unexplainable flaws make Reutemann the epitome of the 1970s grand prix driver. “The funny thing was he was not aware of it,” chuckles Murray. “We used to stand in the background and watch the girls fawning – and he had no concept at all. It was quite sweet really.”

Gordon Murray will get behind the wheel of his rediscovered and revolutionary IGM 750 T.4 001 at this year's FoS, as well as the Brabham BT44B

As Gordon says, this was a different South American to the Brazilians who began to cross the Atlantic and plot their path to F1 in the same era. Reutemann was a cattle rancher’s son from Santa Fe, who began racing in 1965 and was chosen five years later by the Automovil Club Argentino for a sponsored season in Europe driving a Brabham BT30 in Formula 2. Unlike Fittipaldi, it didn’t all click immediately but he finished runner-up to Ronnie Peterson in 1971 and was signed the year after by Bernie Ecclestone, who had completed his purchase of Brabham. Remarkably, he qualified the ‘lobster claw’ BT34 on pole position for his first grand prix, at home in Argentina.

More nuggets would follow in the BT42, but it was in the BT44 in 1974 that he really started to get motoring. He led the first two grands prix that year and won the third, in South Africa. Then unfathomably his form dropped away – only to return in spades at the Austrian GP. He won the season-ending US Grand Prix too: three wins, yet only sixth in the world championship. That was Reutemann.

It appeared 1975 might be his year and he was certainly more consistent, but only one victory – albeit a memorable one on the Nürburgring Nordschleife – left him in the shadow of Niki Lauda and the magnificent new Ferrari 312T. He and The Rat never got on, and it seems their dislike was rooted long before the summer of 1976, when Carlos – frustrated by Brabham’s new partnership with Alfa Romeo – quit to join Ferrari as replacement for Lauda, who had suffered those terrible injuries at the ’Ring. Lauda had every reason to be furious – with Enzo, not with Reutemann. But of all the people they should sign…

In his book To Hell and Back, Lauda offered a typically unvarnished assessment. “No bouquets for this one. A cold, unappetising character,” wrote Niki of Carlos. “When we were together at Ferrari, we made no bones about it, we simply couldn’t stand each other. It was impossible trying to work with him on the technical side because he would always look for a tactical answer that might conceivably work to his advantage during setting up. After my shunt in 1976 he was something of a problem for me to the extent that he tried to win over the entire Ferrari camp, but I soon settled that. A good driver, but nothing spectacular.”

It sounds like a different man to the one Murray describes. Reutemann himself was non-plussed by Lauda’s plain dislike of him. What was it all about? Murray shrugs. “Niki was quite abrasive, which was fine when you knew him. But Carlos was quiet and he was the new boy on the block from South America, and it was difficult for him. His English in the early days wasn’t brilliant. Mind you, Niki’s wasn’t brilliant either. If a sentence didn’t include ‘shit’ or ‘rubbish’…”

Reutemann should have been world champion, of course, late in the day at Williams in 1981. Written off by some as a has-been, he rallied that year to get on top of reigning champion and Williams favourite Alan Jones to head to the Caesars Palace finale a point ahead of Brabham’s Piquet. He stuck the Williams on pole – and then simply disappeared in the race, mumbling something about a handling problem he’d noticed in the morning warm-up. What happened that day remains a mystery, and now he’s gone it always will be.

So any idea why he faded on that day in Las Vegas, Gordon? “No, but I’m glad he did!” comes back the reply. “I don’t know, I don’t think anybody does. Williams said they couldn’t find anything wrong with the car. Carlos always had to be right in his head. Quite often in qualifying he’d say ‘Denny Hulme’s quicker than me, Jackie Stewart’s quicker than me’ or whoever it was and he’d be happy with third. He stopped.” 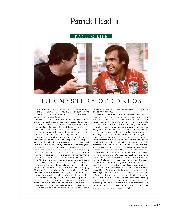 Patrick Head believes it was the Falklands War rather than the speed of Keke Rosberg that led Reutemann to suddenly quit and walk away from F1 in the spring of 1982. What’s really impressive is what he did next. So many racing drivers struggle to find a new purpose when they hang up their helmets, but this man dedicated himself to public service and a long, successful second life as a politician. He served two terms as governor of the Santa Fe province, took membership of the national senate and even geared up for a run at the presidency – only to withdraw enigmatically and without a full explanation. Once again, that was Reutemann.

He would have been a fantastic catch for the Duke of Richmond at Goodwood – and he was always high on my list for one of Motor Sport’s ‘lunch’ interviews when I was editor. But sadly we never got close. He’s a long distant figure to motor racing now, but still his passing triggered a sense of genuine sadness ‘over here’ among those who knew him back then – and for those of us who didn’t, too.

“He was one of the most naturally talented drivers,” says Murray. “He didn’t have to try very hard to be quick.” Flawed? Oh yes. But aren’t we all – and who wants perfection?