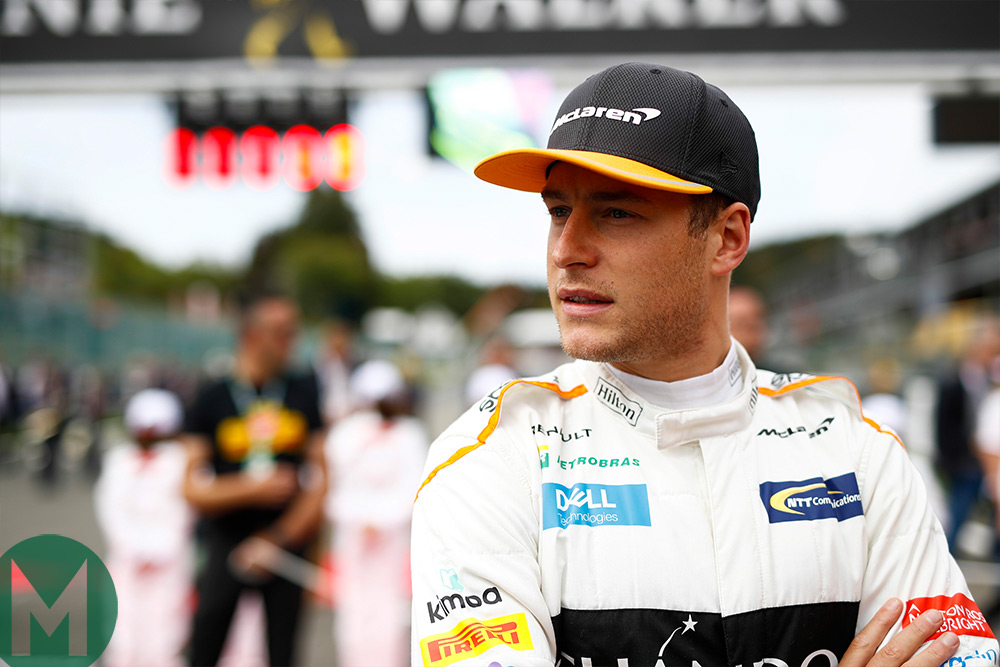 Stoffel Vandoorne will leave McLaren at the end of the 2018 F1 season, the team has confirmed.

His position at the team has reportedly been under threat for a number of weeks, possibly even before the end of the season.

Update: Lando Norris will step up to partner new signing Carlos Sainz in 2019 as part of a multi-year contract. The 18-year-old, currently second in the GP2 standings behind George Russell, has been McLaren’s test and simulator driver since 2017 and driven in the past two free practice 1 sessions.

McLaren earlier this year rebuffed an approach for the services of Norris from Toro Rosso for the second half of the 2017 season and into 2018.

“We believe Lando is an exciting talent, full of potential, who we’ve very deliberately kept within the McLaren fold for exactly that reason,” said Zak Brown. “In Lando and Carlos we have an impressive duo who, despite their relative youth, hold valuable experience in Formula 1 and with McLaren, and represent the next generation of McLaren drivers to lead the team forward. While our short-term focus is fixed on securing the best possible result for the remainder of the 2018 season, we’re also massively motivated by the opportunities that lie ahead.”

Norris said it is a dream come true. “Although I’ve been part of the team for a while now, this is a special moment, one I could only hope would become reality.”

Stoffel Vandoorne, who will vacate the seat at the end of the 2018 season, said: “I’m very grateful to McLaren for investing their faith in me over the past five years. I joined McLaren as a young driver and have since seen my career progress within the team from test and development driver to reserve driver and then to full-time race driver.

“My time at McLaren has been a great chapter in my career and I’m thankful for the opportunity the team, Shaikh Mohammed bin Essa Al Khalifa and Mansour Ojjeh have given me to gain valuable Formula 1 experience and develop as a driver. I intend to give it my all for the remaining seven races of this season, and will announce my plans for next season in due course.”

Vandoorne scored points on his F1 debut at Bahrain in 2016, deputising for Fernando Alonso, and the 2015 GP2 champion has started 34 Grands Prix for the team. Between his GP2 title and F1 debut he spent a season contesting the Super Formula in Japan, finishing fourth in the points.

“It’s clear we haven’t provided Stoffel with the tools to show his true talent,” CEO Zak Brown admitted, “but throughout our relationship he’s proved to be a fantastic team player. His work ethic is impressive, he has a great reputation within the team and we’ve really enjoyed working with him. Of course, we would have loved to achieve more success during our time together, but that doesn’t detract from the fact that he will always be a part of the McLaren family of Grand Prix drivers.

“We wish Stoffel all the best in whatever direction he chooses to take next in his career, and we’ll be supporting him all the way.”

With Fernando Alonso’s decision to leave F1 already announced, McLaren will next year have its first all-new driver line-up since 2007.