Lewis Hamilton has said that that jibes from Max Verstappen are “a sign of weakness,” as the pair prepare to battle for the 2020 Formula 1 world championship.

The 22-year-old has said that he would beat Hamilton if both drivers were in the same car. He also claimed that the Mercedes driver’s championship success was down to a superior car and the lack of challenge from a team-mate.

A rivalry between the pair has been growing in recent seasons, as Verstappen and Hamilton increasingly duelled on the track.

Ahead of the 2020 season, Hamilton fired back, when asked about the challenge from Verstappen and Charles Leclerc, claiming that the comments are a sign of weakness from his rival. 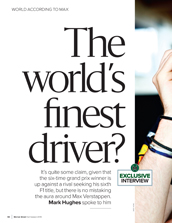 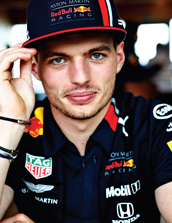 We sit down at Red Bull with the man Christian Horner insists is now the world’s best Formula 1 driver. The photographer can’t resist the cheeky temptation to sit Max…

“What do you think of these young guys giving a bit of chat about you?” he was asked in a Mercedes video (below) at Silverstone, where the team is shaking down the 2020 W11 car.

“I find it funny, I’ve just known to always do my talking on the track,” Hamilton replied.

“Often, I tend to see that as a sign of weakness.”

The reigning world champion and Dutch charge have been in each other’s crosshairs since August when Verstappen told Motor Sport that he thought Hamilton’s success was based on his Mercedes car.

“It’s car-dependent. I don’t think he’s had the pressure of a team-mate over the years,” said Verstappen.

“He should really have won it in 2016 as well if it wasn’t for engine failure… but after the summer break there were a few poor starts and stuff where he lost first place.

“But he never really had big pressure from his team-mates.”

The two could be set to fight over the 2020 championship with Honda’s recent steps forward in the power unit department in a battle that could ignite the duo’s rivalry.