Max Verstappen’s pole-winning margin of 0.13sec counts as dominance at Interlagos, writes Tony Dodgins. It makes him favourite to win at the 2019 Brazilian Grand Prix 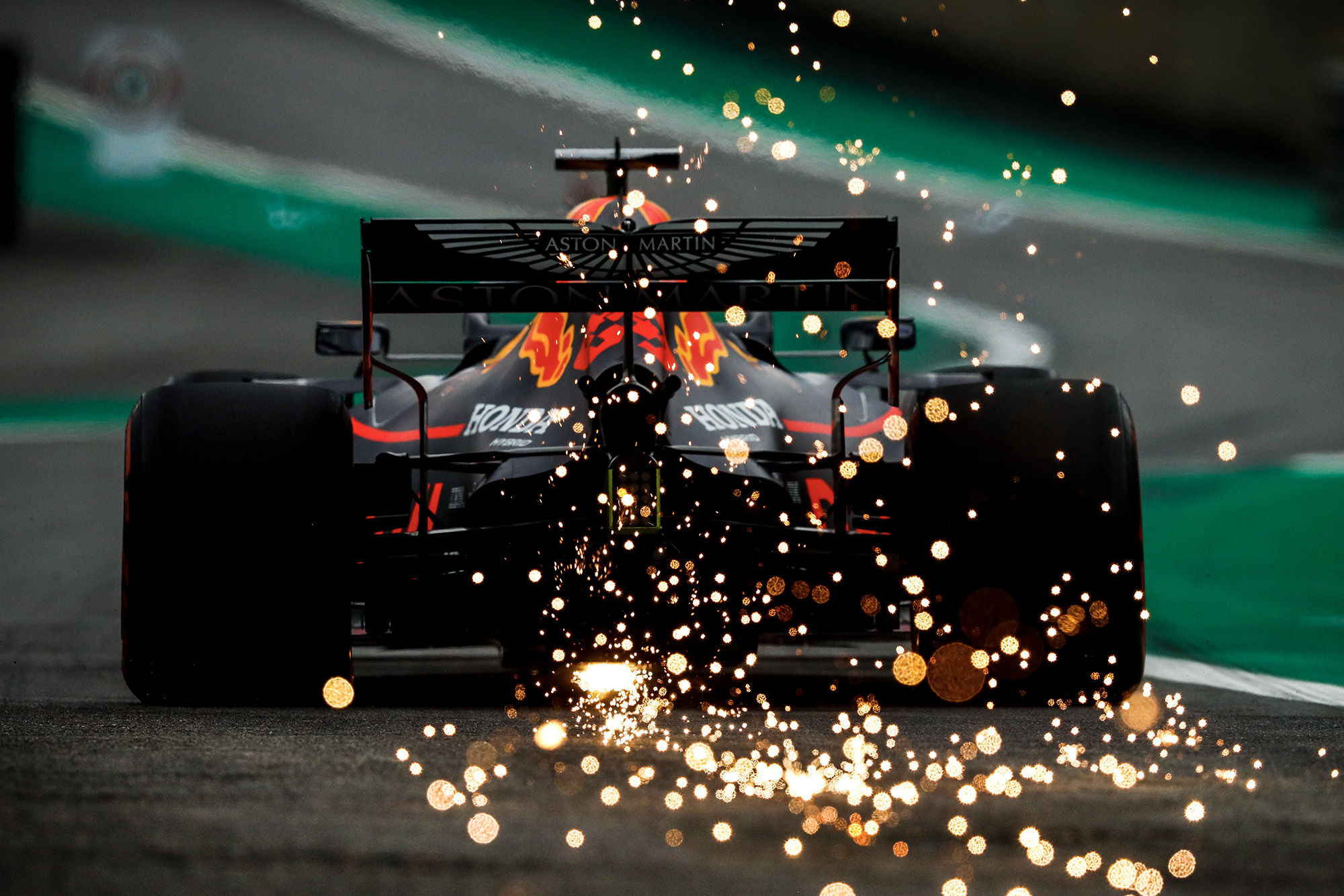 Max Verstappen caused something of a stir post-Austin when he smirked about Ferrari’s disappearing race pace following on from a Saturday Technical Directive. And even used the ‘c’ word. With the initial letter followed by an ‘h’ in case you’re wondering…

“Everyone is free to say what they want,” Sebastian Vettel responded in Brazil. “It may not be professional or mature, but I don’t want to answer back. Isn’t it a sign of the times that a lot of people have something to say? The big difference from the past is that a lot of people are being heard, whereas before they were being ignored…”

According to Vettel, Ferrari’s poor US GP race showing was down to a combination of issues involving the conditions, tyres and set-up. The best way to fight back, he said, was to return to normal service. The straightline speed advantage disappeared, he said, because Ferrari chose to run higher downforce, evidenced by their stronger cornering, but which didn’t translate in the race.

It’s fair to say then, there was even more interest than usual in the relative pace of F1’s top three teams at Interlagos. And, much to his intense satisfaction, it was Verstappen who gave Christian Horner a fine 46th birthday present when he claimed Red Bull’s second pole of 2019 by 0.13sec from Vettel’s Ferrari, with Lewis Hamilton’s Mercedes six-hundredths further adrift.

It would actually have been Red Bull’s second pole in three races if Verstappen hadn’t so badly machine-gunned himself in the foot in Mexico.

“In fact,” said Horner, “we’ve been in contention for pole at the last three races. Honda is doing a great job.” It was the Japanese company’s first Interlagos pole since Senna in ’91, when Ayrton won for the first time in front of his home faithful. 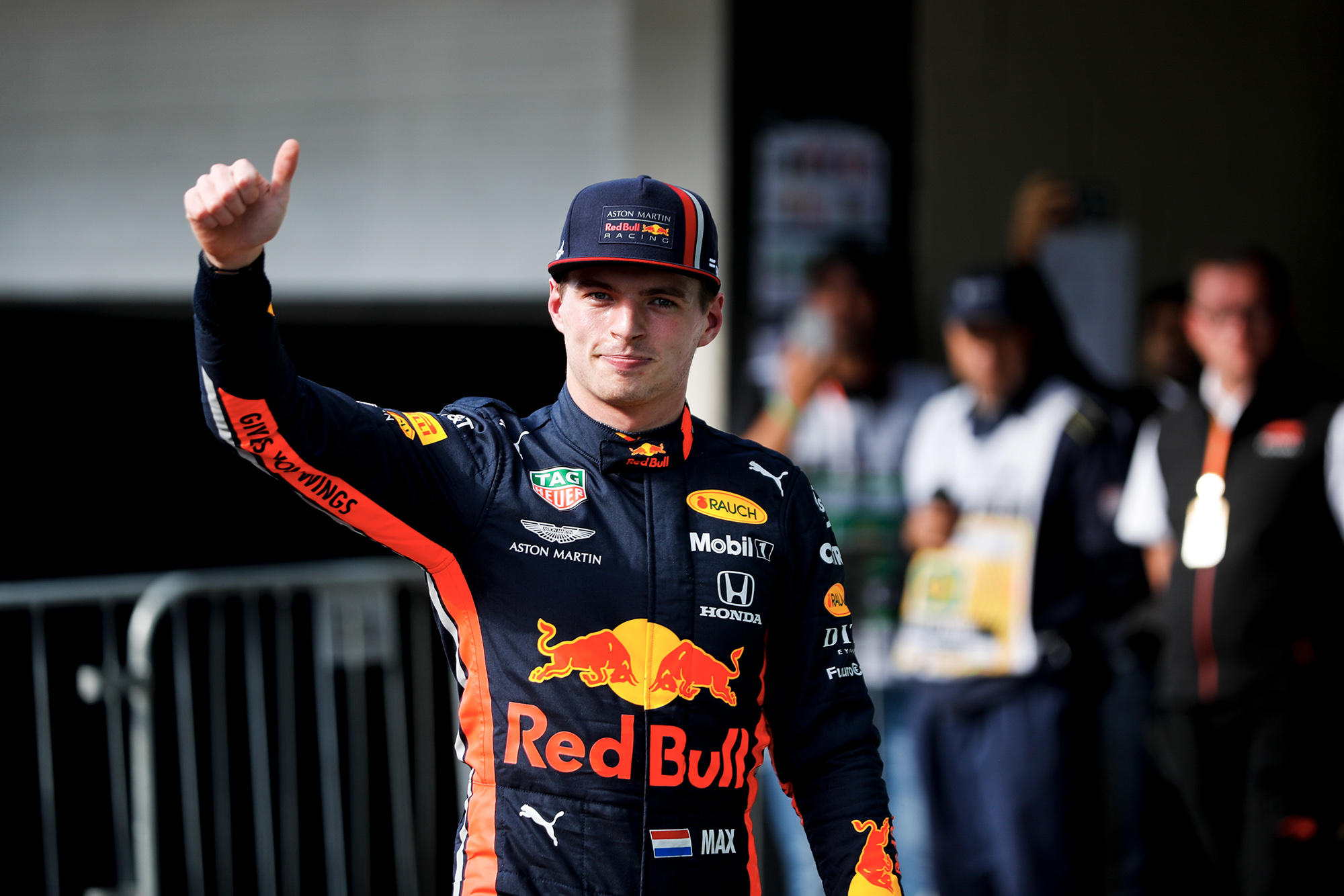 Verstappen’s second (or should that be third) F1 pole Photo: Motorsport Images

Verstappen was about as dominant as it gets around the second shortest lap on the calendar, Interlagos famed for lap time closeness. To illustrate the point, Kimi Räikkönen made it through to Q3 while Nico Hülkenberg, 0.07sec slower, was 14th…

Max though, topped every qualifying session, including Q2, in which he made a mistake and ran wide at Turn Nine.

“If you have such a lap and you’re still on provisional pole, you think, okay, we can do this.” Whereas last year the Red Bull was half a second adrift of Mercedes and Ferrari, this time it was bang on the pace. And, provided Verstappen isn’t caught out by that slightly uphill start, he should be the man to beat.

“Mercedes should be the main threat,” Max declared.

And Ferrari. Will they fall away?

“They should do…” he smiled. 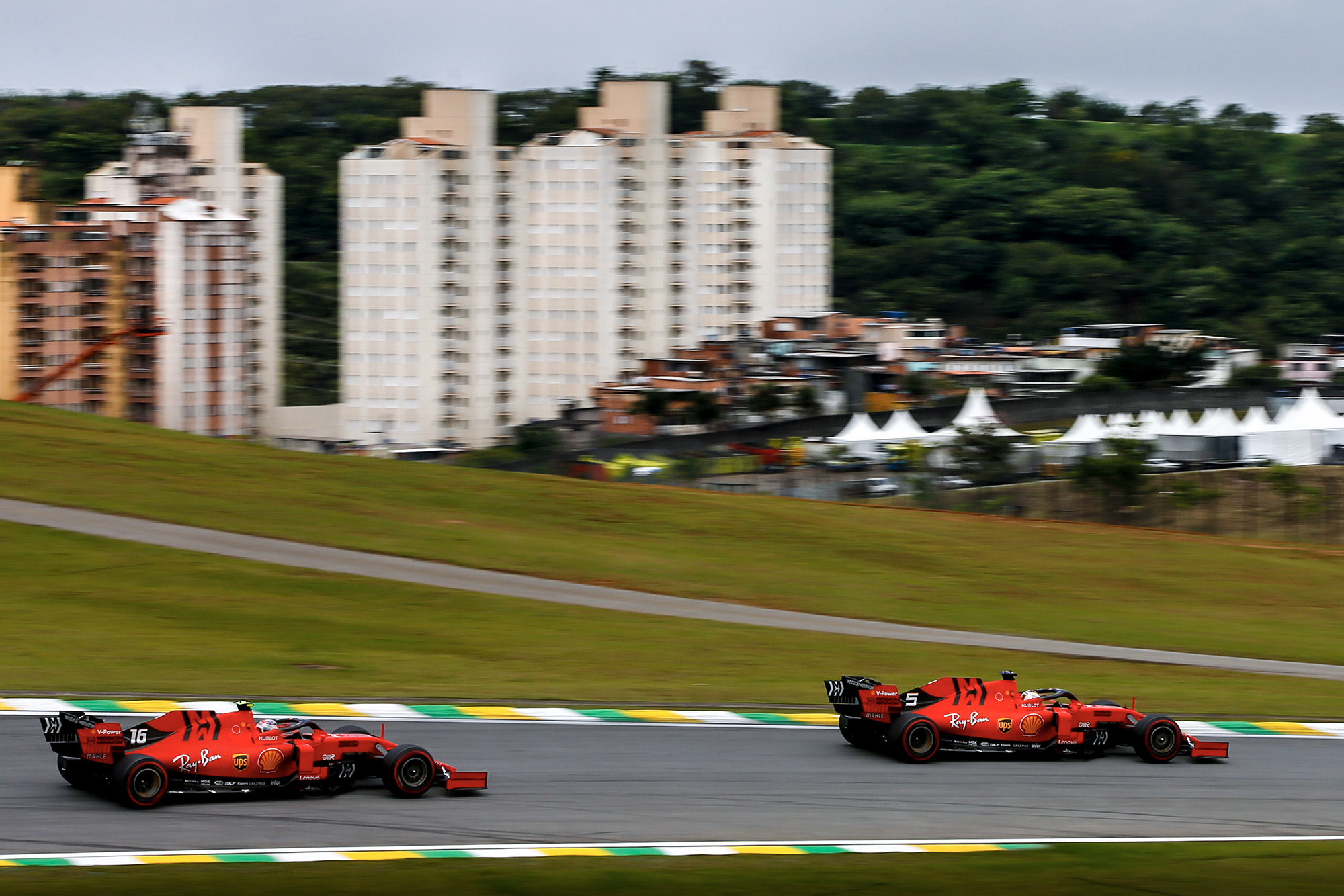 Leclerc trailed Vettel in qualifying and will be further back in the race Photo: Motorsport Images

In fact, Verstappen should only have one Maranello machine to worry about, with Charles Leclerc hit by a 10-place grid penalty for a replacement power unit. The Monégasque ended up fourth quickest and upset.

“I’m very disappointed with myself today… I cost myself three tenths at the last corner and when you know you have a car to fight for pole, that’s annoying.”

Hamilton — who earlier in the weekend allowed that his Mercedes future beyond 2020 may depend on the future plans of his team boss Toto Wolff, who has been linked to a potential role with the sport’s owners Liberty and is missing his first GP since 2013 — reckoned he’d got all there was to be had out of his Mercedes W10.

“We were competitive in practice but then seemed to lose ground to Red Bull,” he said. “Or they gained. We’re down on power compared to others but that last lap was my best of the session – awesome.”

He will start third, with team-mate Valtteri Bottas alongside him once Leclerc is bumped down to 14th.

Charles, however, shouldn’t be entirely written off, having gone through Q2 on the medium tyre, in isolation, so will likely run an offset race strategy and could be very strong in the closing stages. Since his ultra-impressive back-to-back victories in Spa and Monza, Leclerc hasn’t been able to buy any luck over the past five races.

Bottas admitted to struggling in practice but got it together better in qualifying, although he ended up 0.18sec shy of Hamilton, which just happens to be his average deficit to the new six-time champion across the entire season.

“I was surprised to see the pole time though…” Valtteri admitted, contemplating the nigh-on four-tenths gap to Verstappen. 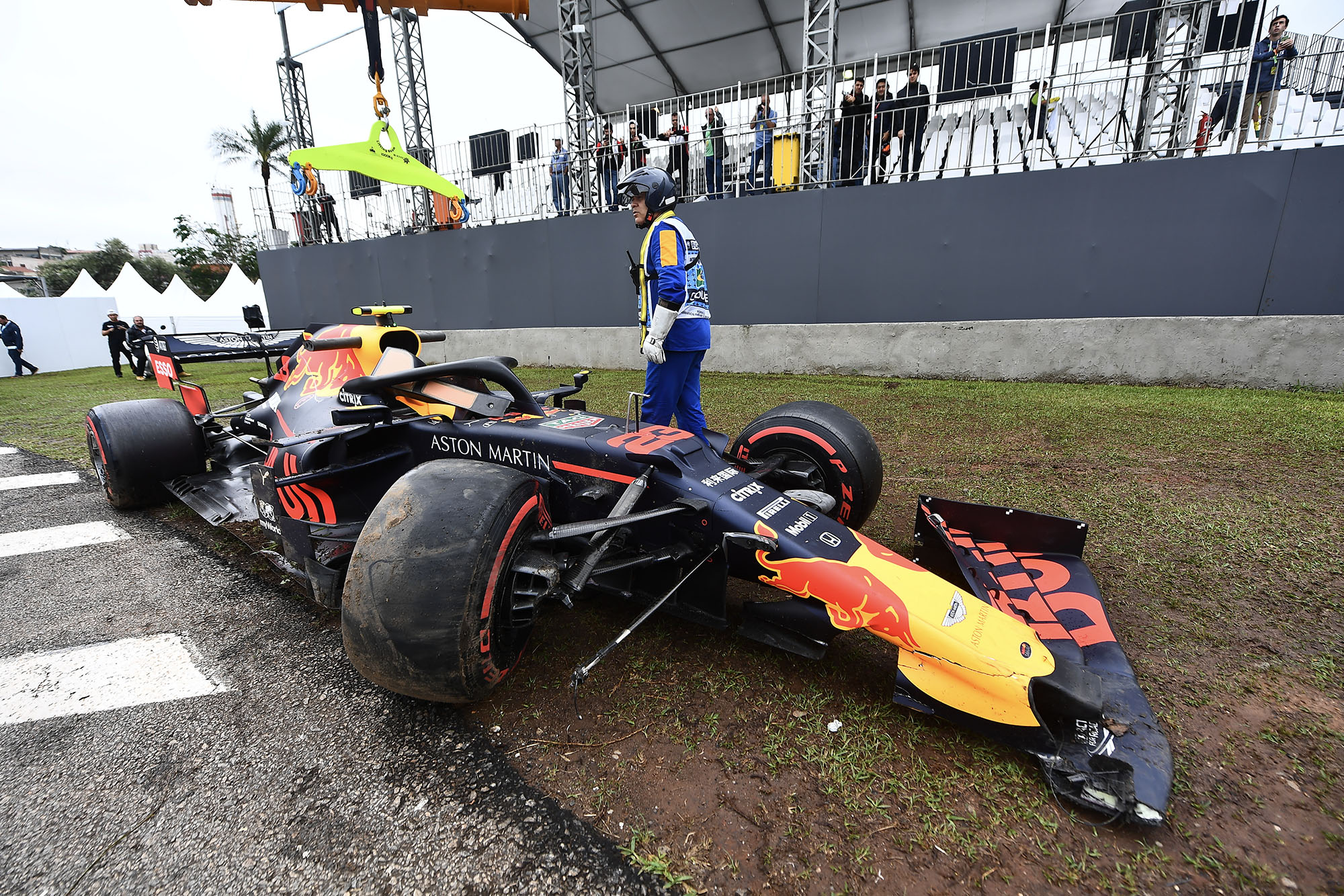 Albon’s weekend didn’t get off to the strongest start Photo: Motorsport Images

Alexander Albon had the comfort of his 2020 Red Bull confirmation between Austin and Interlagos, but didn’t get off to the greatest of starts when he skated off at Junção on slicks on a damp track at the end of FP1.

Albon had a slide at Turn Two in Q3, put a bit more heat through his tyres, took the edge of them for the rest of the lap and ended up missing Bottas by five-hundredths but 0.43sec down on his team-mate.

“I don’t like using first circuit visits as an excuse,” he said. “and I wanted more.” His Suzuka lap, which matched Verstappen to the thousandth, has been the stand-out since the Anglo-Thai replaced Pierre Gasly in the senior team after the summer break and he wasn’t happy to be further from Verstappen than his average deficit (0.4sec) on such a short track.

The man starting alongside him will be Gasly himself who, for the record, had an 0.57sec average margin to Verstappen in his 12-race tenure of the second Red Bull.

This was good news for Toro Rosso, just a point behind Racing Point for sixth in the constructors’ championship. “We had an issue on Friday afternoon and so I’m not sure what the race pace will be like,” the Frenchman admitted, but we should have opportunities from P6, for sure.” 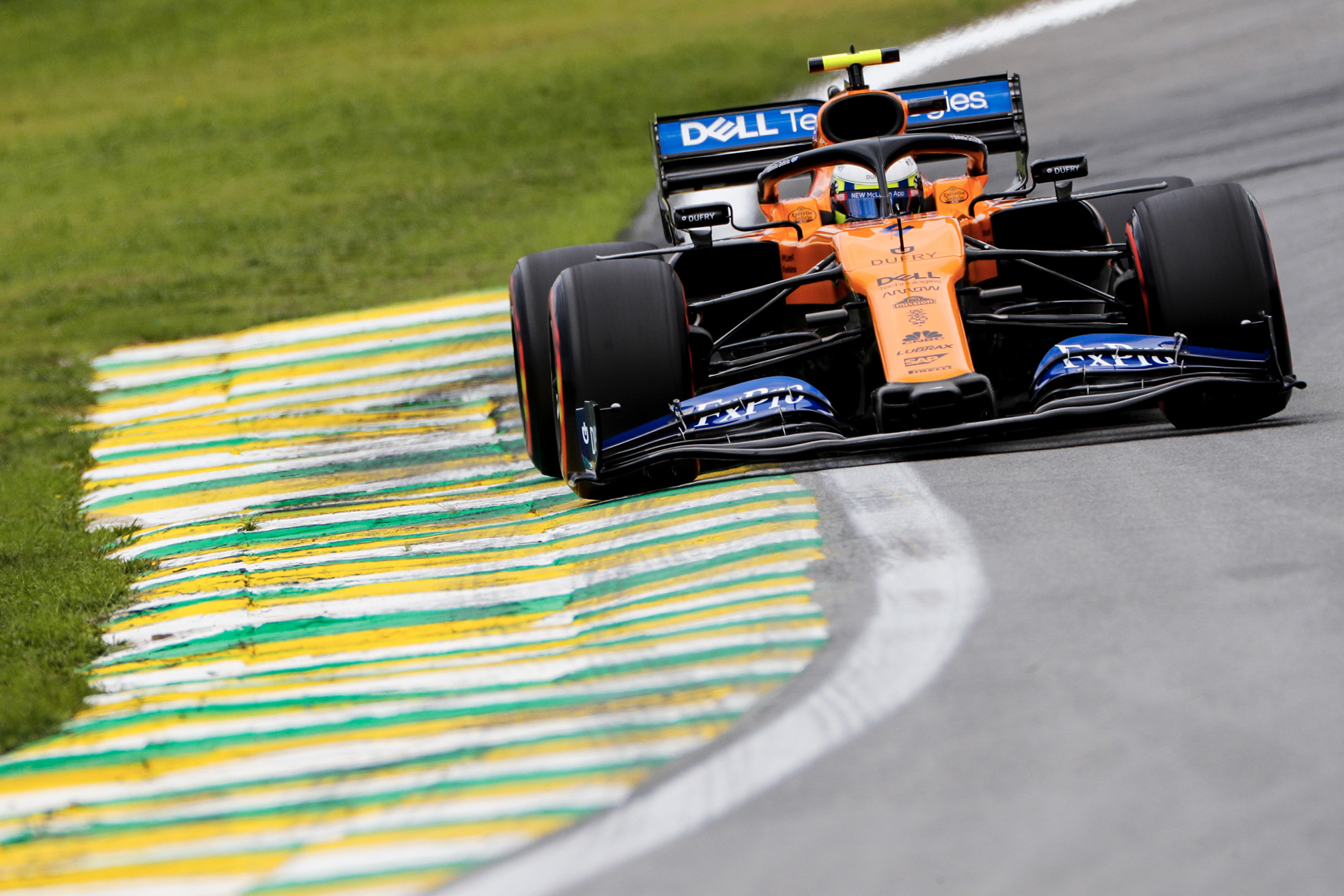 McLaren is as good as fourth in the championship, the team’s best finish since 2012, and will clinch it if its drivers outscore Renault by six points in Brazil. Surprisingly though, neither team managed to get a car into Q3.

Carlos Sainz went out in Q1 for the second time. In Oz he was tripped up by a crashing Robert Kubica, while in Brazil a power unit issue stopped him recording a time.

Lando Norris apologised to the team for “not getting it together,” and missed out on the final Q3 slot to Kimi Räikkönen, who made it through for the first time since Monza.

The Renaults, meanwhile, were 12th and 14th, Daniel Ricciardo a couple of hundredths quicker than Nico Hülkenberg, who is accepting that he won’t be on the F1 grid in 2020.

“It’s not a retirement but it’s maybe a year out,” he said. “What happens in the future? That’s unclear, but this is a fast-moving business. I’m cool with that. I don’t have to have everything pre-determined. After 10 intense years in F1, maybe it’s about regrouping and finding a new challenge.” He ruled out Formula E, with the new season kicking off in Saudi next weekend.

So, if there were no McLarens nor Renaults, who filled out Q3?

Haas! For the first time since round five at Barcelona, both of Guenther Steiner’s cars made the top 10, Romain Grosjean eighth and Kevin Magnussen 10th, the pair separated by almost two-tenths, a veritable age around Interlagos.

Magnussen had been sixth in FP2 with Grosjean 16th, the pair explaining that the car was so sensitive to track temperature that recording laps at different times was enough to explain such a gap.

“Fair play to Romain though, he stepped it up and did a lap that I just couldn’t match,” Magnussen admitted. 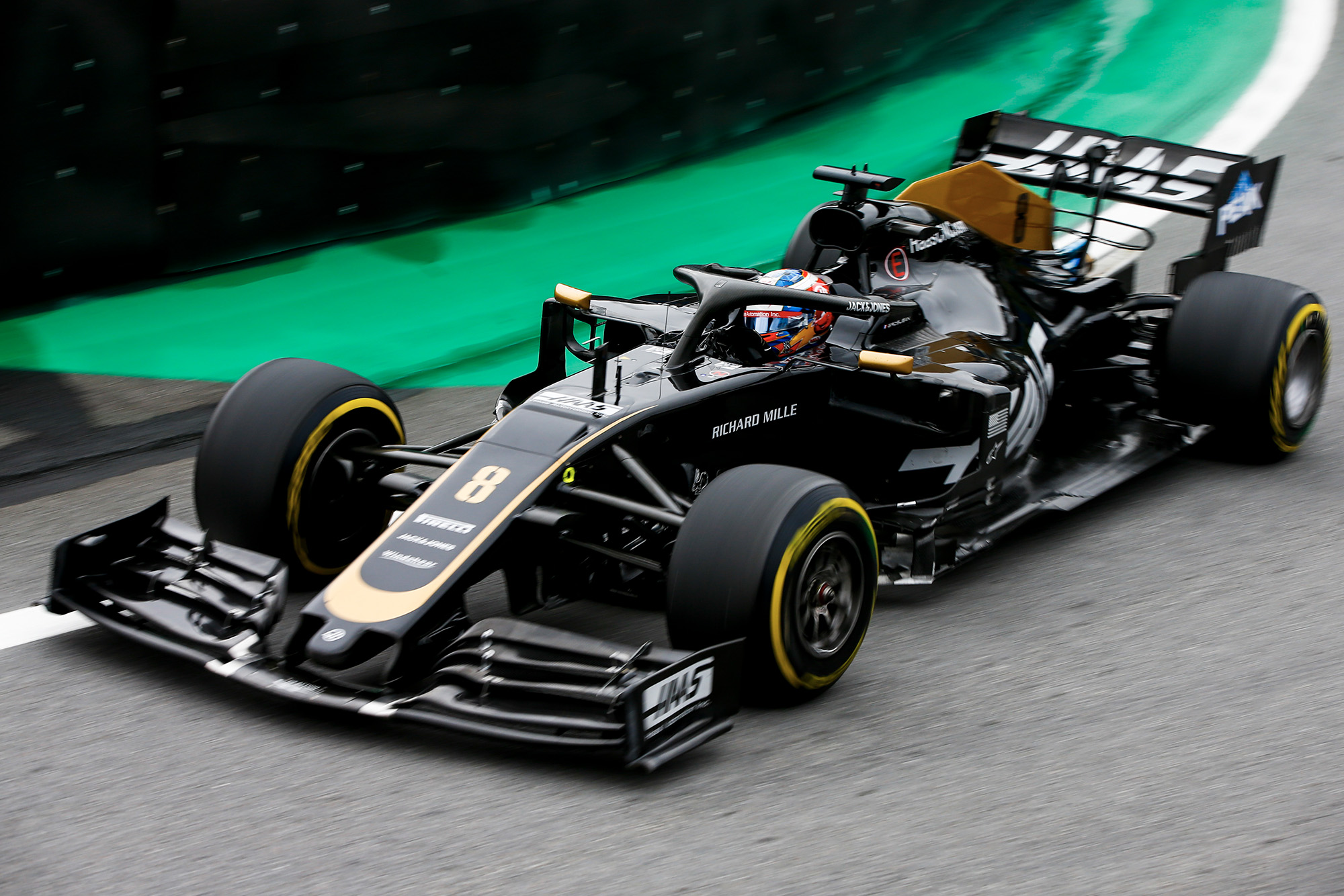 As with Räikkönen, a Ferrari power unit was no doubt well-matched to the long uphill drag out of Junção, the last corner. But what the black and gold cars will do in the race, is anyone’s guess.

Can Verstappen convert? Last year, an Interlagos victory disappeared in an unnecessary bout of on and off-track handbags with old karting rival Esteban Ocon, who had the audacity to try to unlap himself from the race leader. At least Esteban isn’t in the race this time!

And the other guy Max might just get sucked into doing something rash with, Leclerc, is back in 14th slot. The smart money should go on the Dutchman.