A frenetic and sodden qualifying session which was delayed by 12 minutes due to adverse conditions eventually saw Max Vesrtappen claim pole, putting in a lap that left nothing on the table as he was pushed all the way by George Russell, who will start second.

Lewis Hamilton will be third on the grid tomorrow with Daniel Ricciardo fourth.

Q3 was red flagged after a sizeable accident at Eau Rouge for Lando Norris, the McLaren driver having been the star of qualifying up to that point, topping both Q1 and Q2. 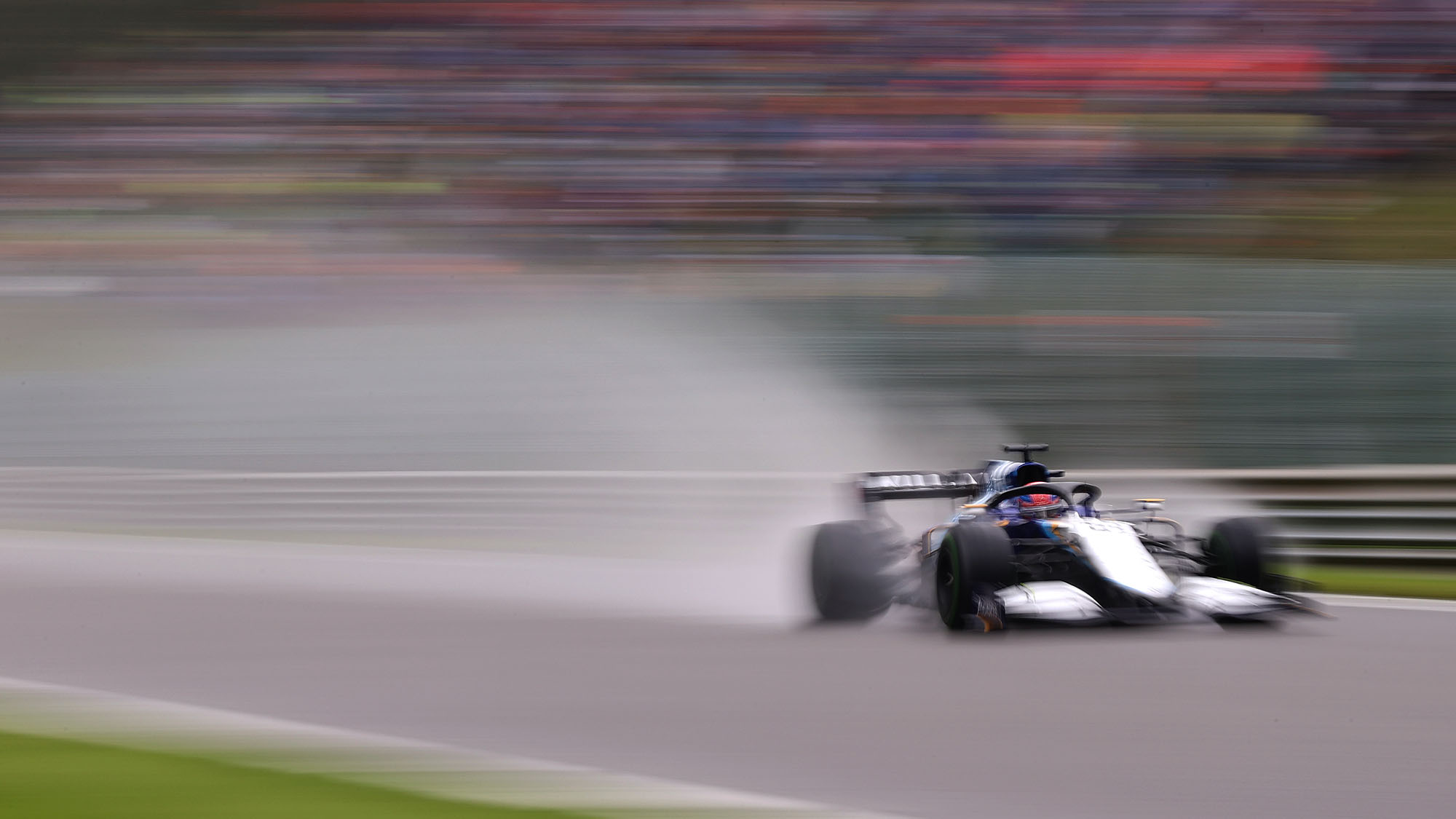 The choice facing drivers was whether to choose wet or intermediate tyres in the treacherous conditions.

Nicholas Latifi went off, halting the fast laps of Lando Norris and George Russell, but the latter carried his momentum into the next tour, going fastest on the inters with a 2min 11.727sec.

Both Mercedes then had an off at Malmedy, before Max Verstappen went quickest with a 2min 07.574sec, only for Russell to top the timesheet by 5.5sec.

After the Williams 1-2, Norris was third with 2min 06.780sec, though he was bested by Alpine’s Esteban Ocon, 1.5sec off of Russell.

Carlos Sainz bolted on a set of inters, a 2min 01.969sec helping him top the timesheets, a flurry of quick times coming in as the rest of the field followed suit.

Lando Norris and Max Verstappen broke the 2min barrier, the McLaren driver quickest with a 1min 58.776sec, as Lewis Hamilton got into the top five with a 2min 00.539sec.

The latter then put himself under the 2min rope, 1min 59.218sec, as even a huge lock-up into the Bus Stop chicane couldn’t prevent him going second fastest.

As the flag fell on Q1, Verstappen went quickest for a moment, before Norris eventually claimed top spot with a 1min 58.301sec. 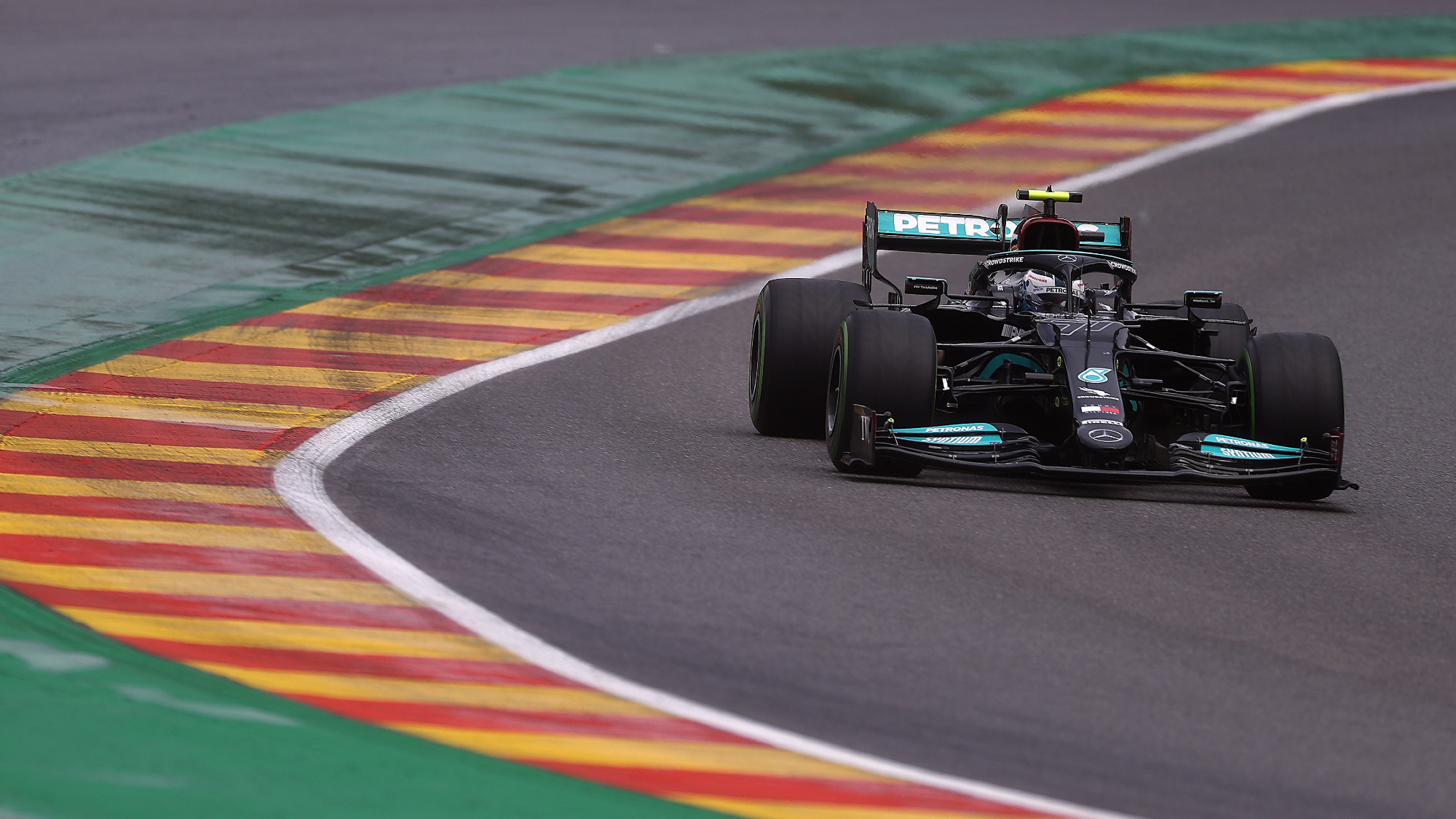 The field headed out with rain due in five minutes, everyone desperate to get a lap in before the heavens opened. Lewis Hamilton went out on used inters, his team then deciding to pull him in from his outlap to put on a new set instead.

The Q1 form continued, with Norris taking first initially on a 1min 57.235sec as both Williams (Russell and Latifi respectively) fell into line in second and third behind.

Verstappen was the only driver that could get close to the McLaren, finding himself second, a tenth and half behind Norris.

Sebastian Vettel then slotted into third with a 1min 57.886sec with Pierre Gasly behind.

Both Mercedes were struggling to set a fast lap, Hamilton 10 seconds off of Norris’s lead time and Valtteri Bottas two seconds behind that.

Hamilton then managed to haul himself into the top 10, going seventh-fastest with a time 1.5sec off the dominant McLaren.

Bottas briefly found himself tenth, before a Lance Stroll 1min 58.231sec pushed him into 11th.

Verstappen went fastest with a 1min 56.559sec, as Hamilton found himself pushed into tenth and at risk of not making it through the to Q3.

The Mercedes driver was told it was now all or nothing, he responded “Understood – leave me to it”.

It turned out to be an all-British top two when the flag fell though – a 1min 56.025sec meaning Norris was fastest, with Hamilton rescuing his session with time two tenths off his countryman.

Bottas was then third, seven hundredths off his team-mate, whilst both Ferraris were eliminated, Charles Leclerc 11th and Sainz 13th. Fernando Alonso was also out, along with Latifi and Stroll. 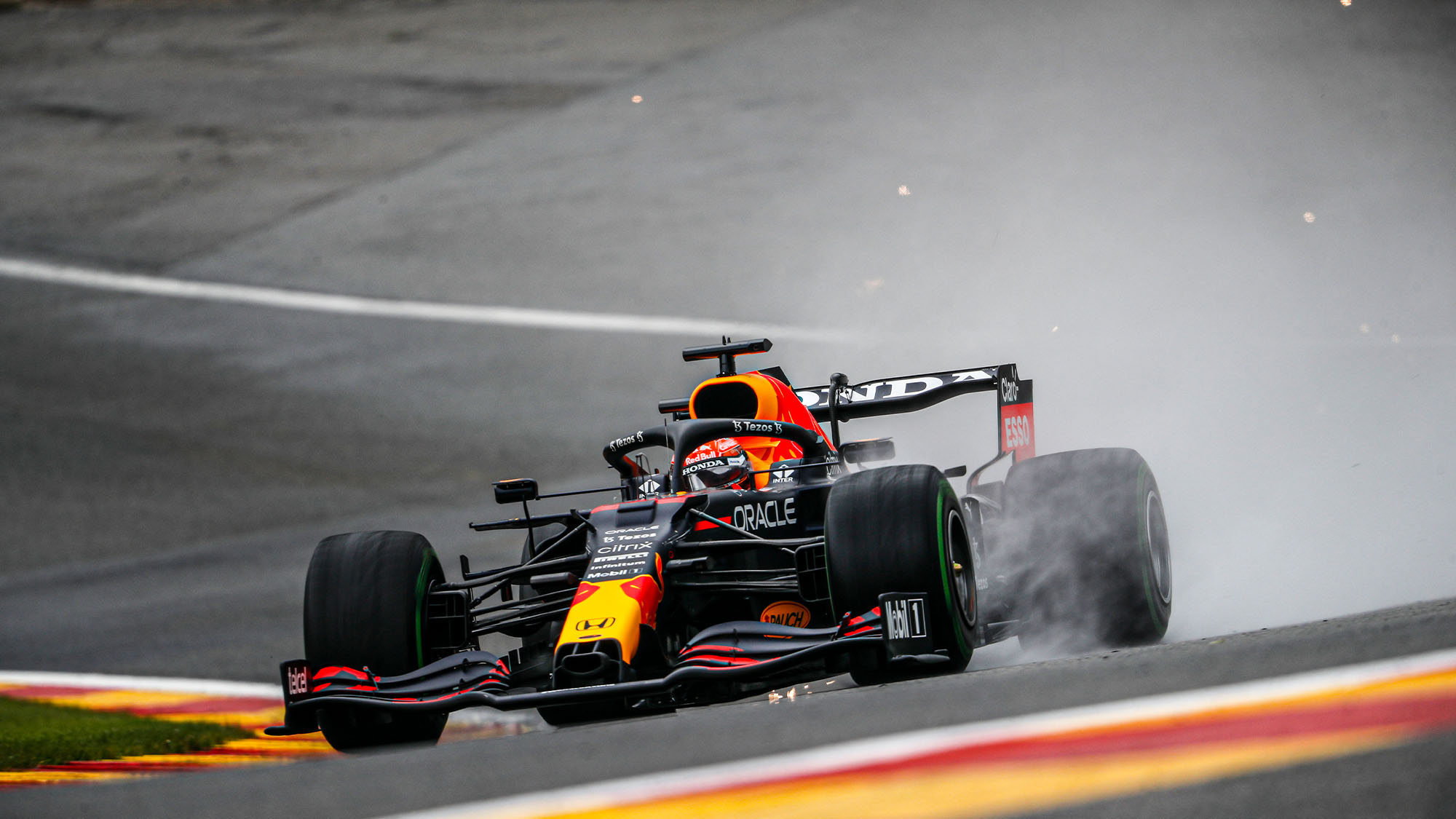 Verstappen left it until his final qualifying lap to take pole

The rain started to come down hard in between the two sessions, meaning all cars put on full-wet weather tyres.

Norris then had a huge crash coming into Eau Rouge, aquaplaning straight into the barriers, bringing out the red flags.

“What the **** did I say? It’s unnecessary – is he okay?” said next driver through Sebastian Vettel in response, who slowed down to check if Norris was OK before driving on.

Norris removed himself gingerly from his car holding his elbow, with debris strewn across the track.

A lengthy red-flag was put out so marshals could clean up, before qualifying eventually resumed at 16:45 local time.

Ocon was first to venture out, wet tyres attached, but he came in form his outlap to fit intermediates.

Hamilton went fastest with a 2min 01.552sec, before he slowed down to recharge his battery before winding up for one more fast attempt.

The Mercedes driver wasn’t reckoning with George Russell though, who took provisional pole with a 2min o0.086sec.

However, Max Verstappen spolied Williams’s party – he claimed prime position on the grid with a 1min 59.765sec.

Hamilton ended up third, with an impressive Daniel Ricciardo coming in fourth with a time just a shade over a second off of Verstappen’s time.

Vettel was fifth, a tenth off the Honey Badger, with Pierre Gasly two tenths behind him in his AlphaTauri.

Sergio Perez occupied seventh, with Bottas next quickest, but he’ll take a five place grid penalty for his Hungaroring misdemeanor. Ocon was ninth, and Norris currently has 10th, but it remains to be seen if he will take a grid penalty for repairs to his car.