Max Verstappen’s Red Bull team pulled off a strategic masterclass to win the French Grand Prix at Paul Ricard, the Dutchman overtaking Lewis Hamilton on the second-to-last lap in a nail-biting finish and thus extending his championship lead.

At the race start, Verstappen got the better getaway, but then fluffed Turn Two, locking up and letting Lewis Hamilton through.

His route back to the circuit wasn’t via the correct escape route, but he was not penalised as only those who go off at the first corner are required to go via that route.

Fernando Alonso duelled with Charles Leclerc in the opening exchanges, whilst, further back, Lando Norris lost out after going attempting to get past behind his McLaren team-mate Daniel Ricciardo at Turn One, but went off and so the Woking pair remained ninth and 10th.

Vettel was also on the move, authoritatively sliding past Esteban Ocon into Turn One.

His Aston Martin stablemate Lance Stroll made progress too, getting up to 15th.

Yuki Tsunoda did well on his start from the pitlane, 16th by the fourth tour.

The leading trio made hay, as by lap 4 Sergio Perez was already 5sec off the lead.

Bringing up the rear, the two Haas battled, Mick Schumacher also having to take to the Turn One escape road as Nikita Mazepin won out in the battle for 19th.

By the time DRS was enabled, Hamilton had crucially broken through the 1sec barrier, keeping Verstappen at an arm’s length of 1.4sec. 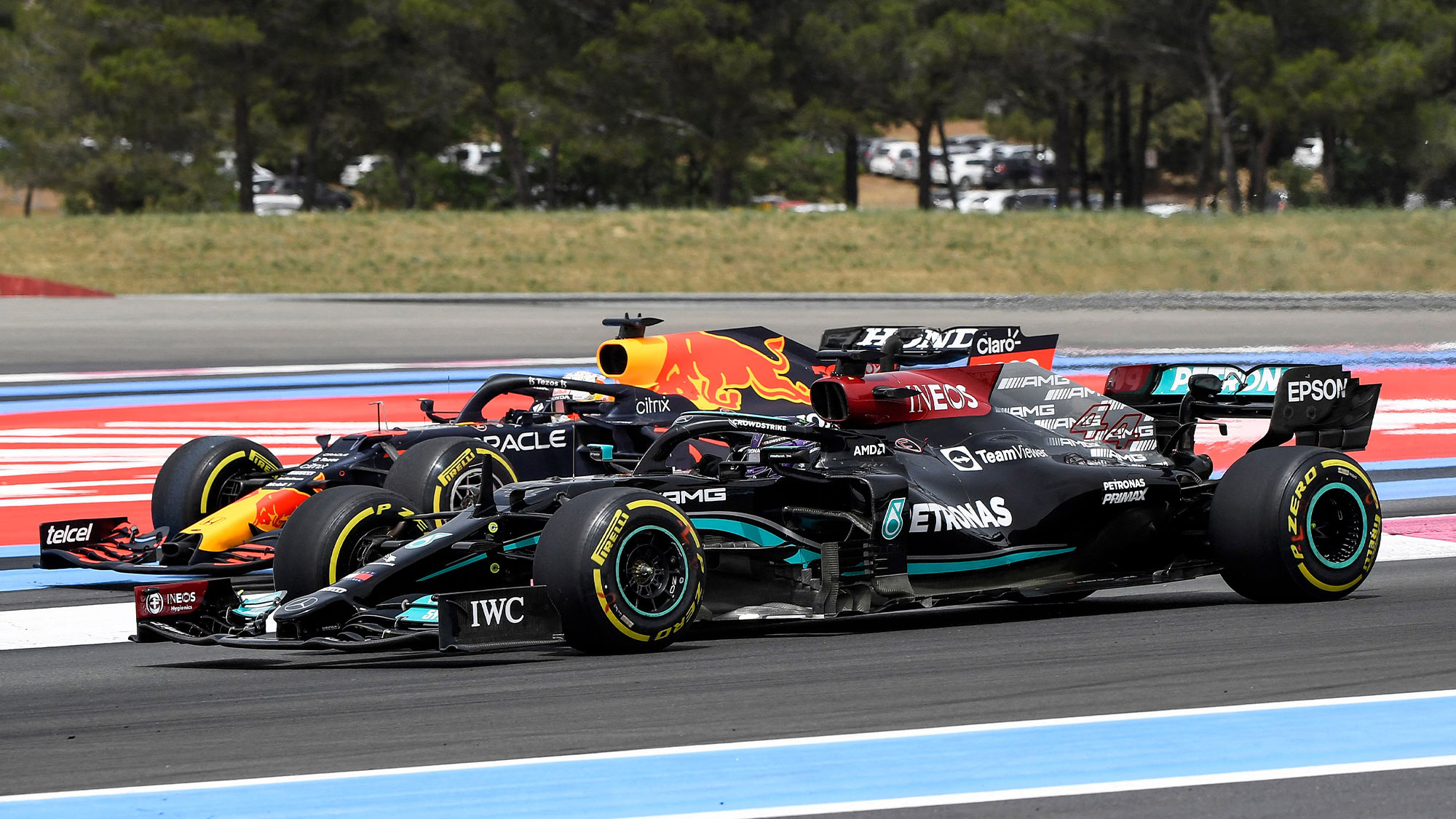 Bottas then began to creep up on the Red Bull, setting a lap of 1min 39.293sec on lap six. Mercedes were on the radio to encourage the Finn, telling him “You’re doing well, anything is possible.”

Ricciardo was tracking Alpine’s Alonso, closing to within half a second as the Spaniard’s medium tyres rapidly went off, but the former was unable to get past.

As the race settled, Stroll slipstreamed past Kimi Räikkönen on lap nine to move up to 14th.

Hamilton and Bottas both reported graining on their left front tyres, as the green track offered up less grip after the rain had washed the previous rubber again.

Ricciardo finally made his move on lap 11, getting past Alonso at the end of Mistral straight, before Norris then bravely dived through two corners later.

Two laps later and Vettel made the same move as the Honey Badger on Alonso, as the Spaniard started to tumble down the order.

By lap 15, Ricciardo had dealt with Leclerc, who responded by diving to the pits to trade his mediums for hard compound tyres. The Australian came in on the next lap, but Leclerc’s faster new rubber got him back ahead when the stops shook out.

Tsunoda took on hards on the next lap, before Ricciardo went for the undercut on Gasly by doing the same on lap 17.

Bottas was told to “bring it”, the Finn putting in the hot laps in an attempt to undercut Verstappen by pitting on lap 18.

Sainz also pitted on that lap, but fell victim to both Charles Leclerc and Daniel Ricciardo, new hard tyres offering much better pace than used mediums. 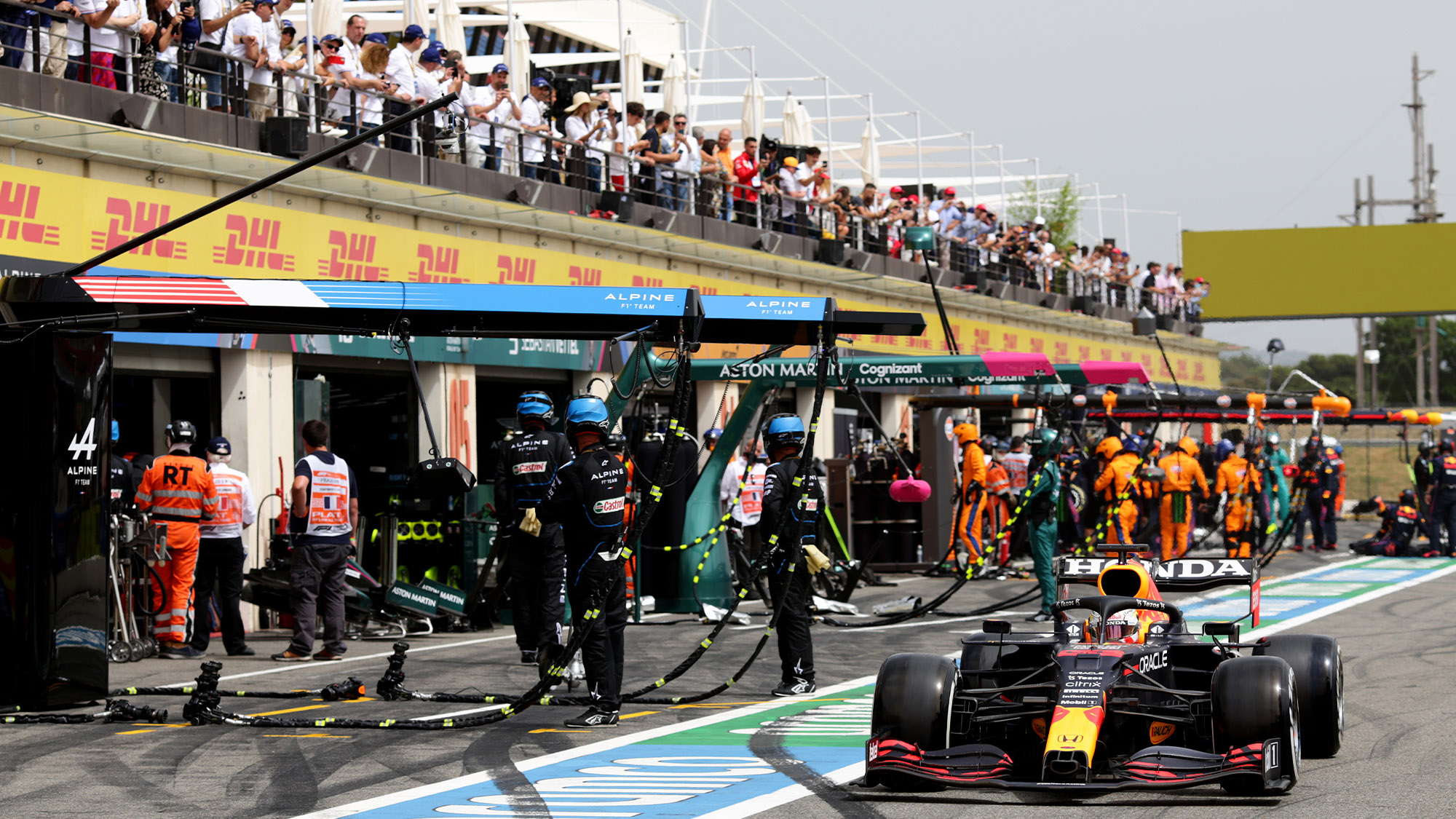 Stroll got past Ocon on lap 19, as Hamilton pitted to cover off Verstappen – which didn’t work.

The Dutchman’s blistering out-lap meant he was able to dive down the inside of the Mercedes driver as they both tore down to the first corner upon Hamilton exiting the pits.

He was close enough to get DRS on the Red Bull on the next lap, but couldn’t get past.

Ricciardo was attempting to overtake Räikkönen on lap 23, but the Finn managed to hold off the McLaren at Turn 10, before he managed to make the pass stick at the first corner.

The Finn pitted as a result, with other cars going long including Norris in fifth, Vettel sixth, Stroll behind him followed by Ocon and Giovinazzi.

Perhaps the ultimate Pirelli preservation master, Sergio Perez, was also going deep into the race in his first stop, leading the race as a result. He eventually pitted on lap 25, leaving Verstappen, Hamilton and Bottas running as a 200mph train out infront.

Ricciardo overtook Giovinazzi on lap 26 and Ocon two laps later, whilst Gasly, who had fallen down the order due to the power of the undercut, got past Giovinazzi, who then pitted.

Norris, who had tyres nine laps fresher than Gasly, then began to pressure the Frenchman on lap 29, the pair nearly colliding at the end of the Mistral straight, but the McLaren driver made it stick on the next lap

Norris was a man on the move, as he overtook Leclerc – who had pitted on the fourteenth lap – later on on the same circuit.

He then hunted down his old team-mate Sainz, slipping past the Ferrari at he Mistral straight chicane on lap 32.

Leclerc began to plummet down the field, as Alonso overtook him on the Mistral also on the same.

Verstappen, who was struggling with his tyres, thus allowing the Silver Arrows to close, pulled the pin and decided to pit on lap 32.

Norris then overtook Ricciardo on lap 34, as Gasly closed on Sainz.

By lap 35, neither Vettel (in fifth) nor Stroll just behind had pitted, but Norris passed the latter as they began to struggle on their veteran hard compounds – Stroll pitted as a result.

Verstappen passed Perez on the same lap and set a fastest lap of 1min 36.404sec – two seconds faster than Hamilton set on the same tour.

Gasly finally got Sainz on lap 37 at the chicane, as Verstappen’s radio began to fail, but still the Red Bull driver relentlessly closed on the Mercedes pair.

With ten laps to go, Verstappen had got the gap down to Bottas by 1sec. The Finn out-braked himself into the chicane, meaning the Red Bull got a run on the Mercedes and got past in the next corner.

The Dutchman was now after Hamilton. The reigning world champion set a personal best on lap 44, but Verstappen further closed the gap further closing the gap. 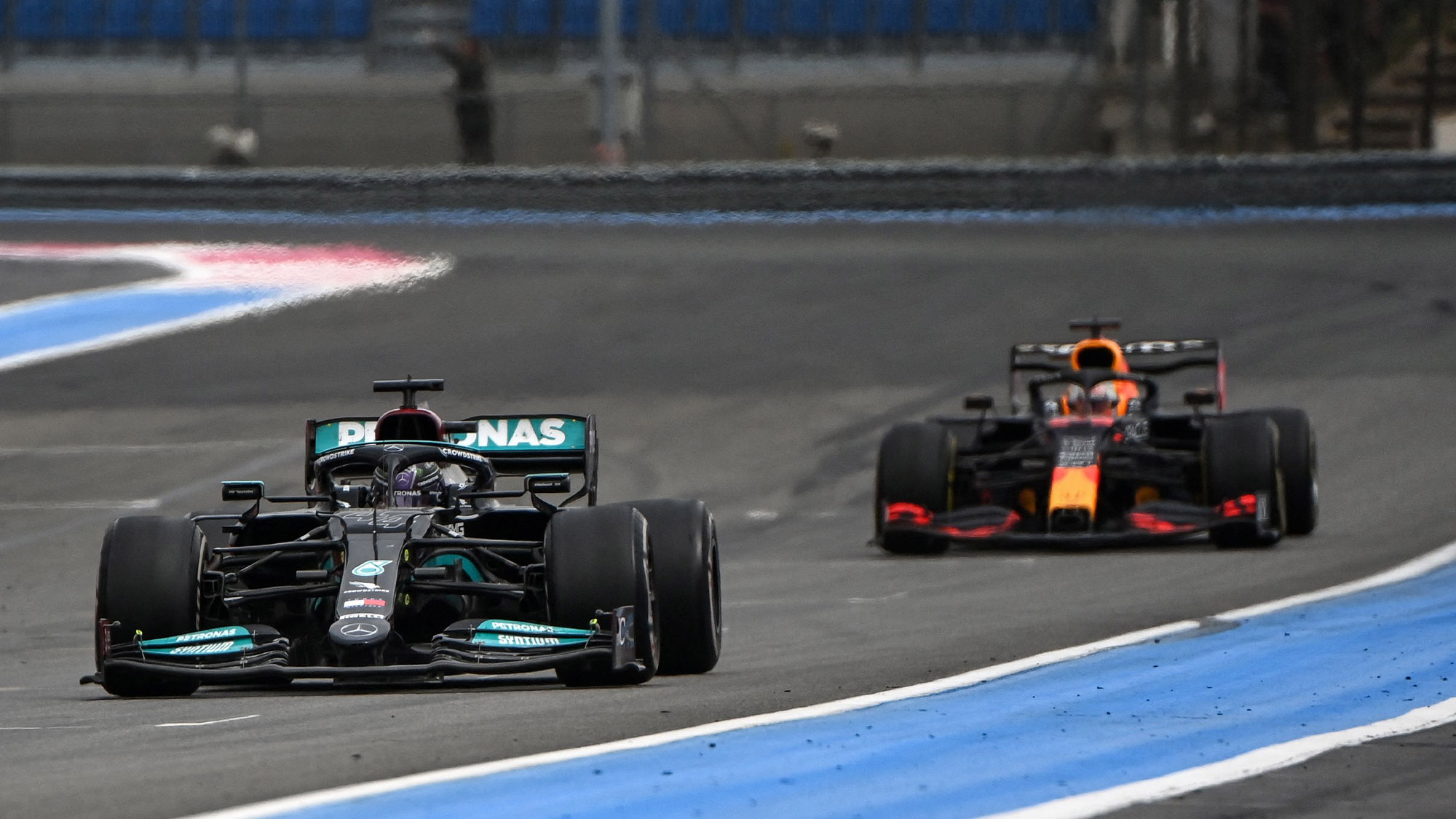 Bottas began to seriously struggle on his experienced hard tyres saying on the radio, saying “When I said it was a two-stop race, why the f*** did no-one listen to me?” as Perez closed in.

Lap 46 and the gap between Hamilton and Verstappen settled at 5sec, as the leading pair closed on back-markers.

Two laps later though and the margin had reduced to 3.3sec, whilst Perez began to explore overtaking opportunities on Bottas – he swept past on the outside at Turn on lap 48.

Verstappen was just 1.6sec behind Hamilton by lap 51, as George Russell got ahead of Yuki Tsunoda.

One lap later it was under half a second, he dived up the inside of the chicane to snatch the lead of the race.

Verstappen enjoyed a comfortable last lap to win by 2.9sec from Hamilton, with Perez third and Bottas fourth.