It started with Max Verstappen raising his middle finger at Lewis Hamilton and calling him a “stupid idiot” and ended with the pair embracing after a proper strategic thriller that went the way of the championship leader.

You’d be forgiven for forgetting who led heading into this race, such has been the number of lead changes in recent races, but it was Verstappen by six points. Yet that was a slender lead given the expectation that COTA would suit Mercedes, and Red Bull might have to do a bit of damage limitation.

400,000 people attended the United States Grand Prix weekend, and they saw the two title rivals elevate themselves and each other far above the rest of the field.

Sergio Perez had seemed a threat in qualifying before Verstappen secured pole ahead of Hamilton, and after a grid ceremony full of energy and buzz befitting of the occasion, the two rivals went wheel-to-wheel into Turn 1. 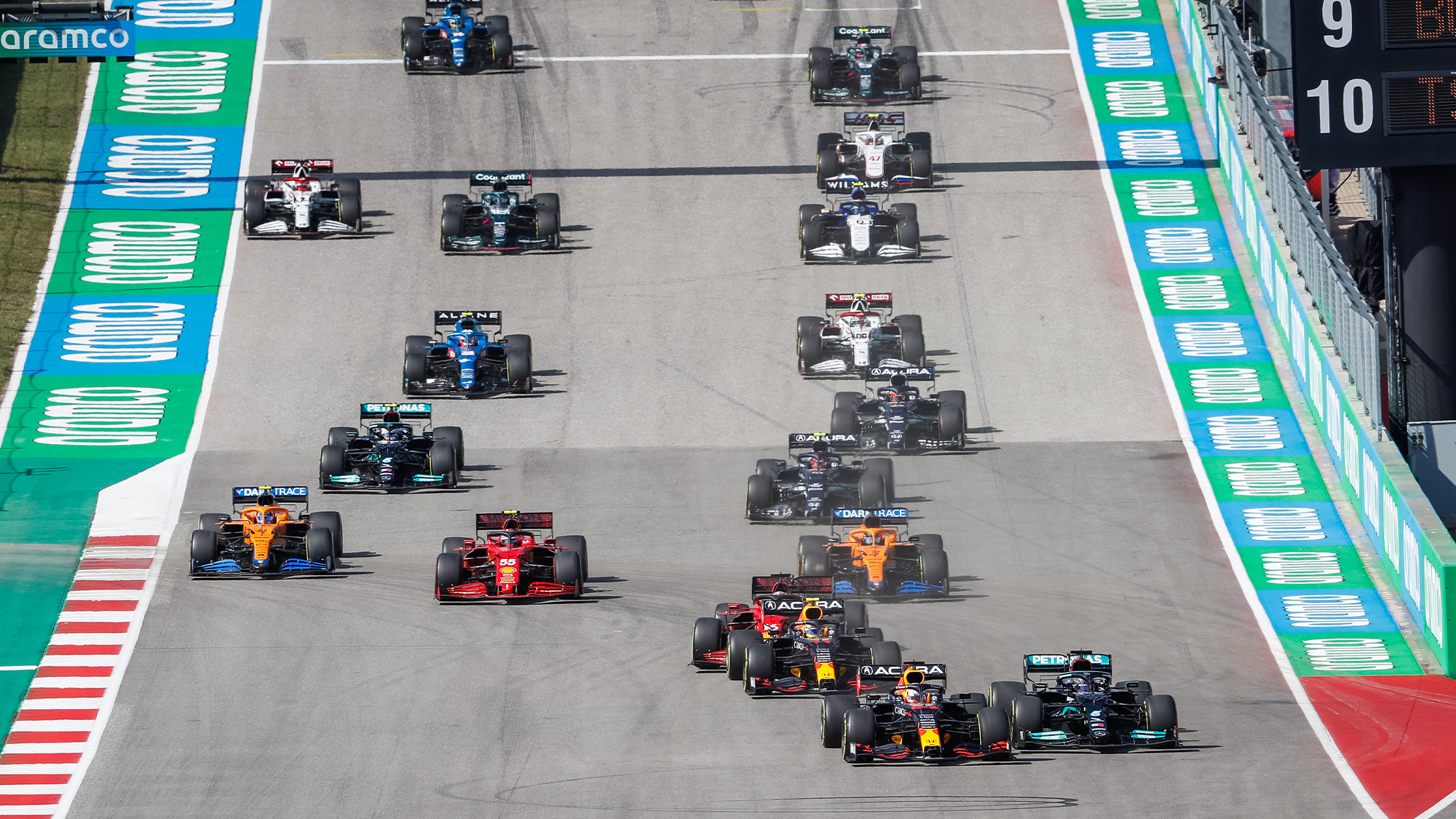 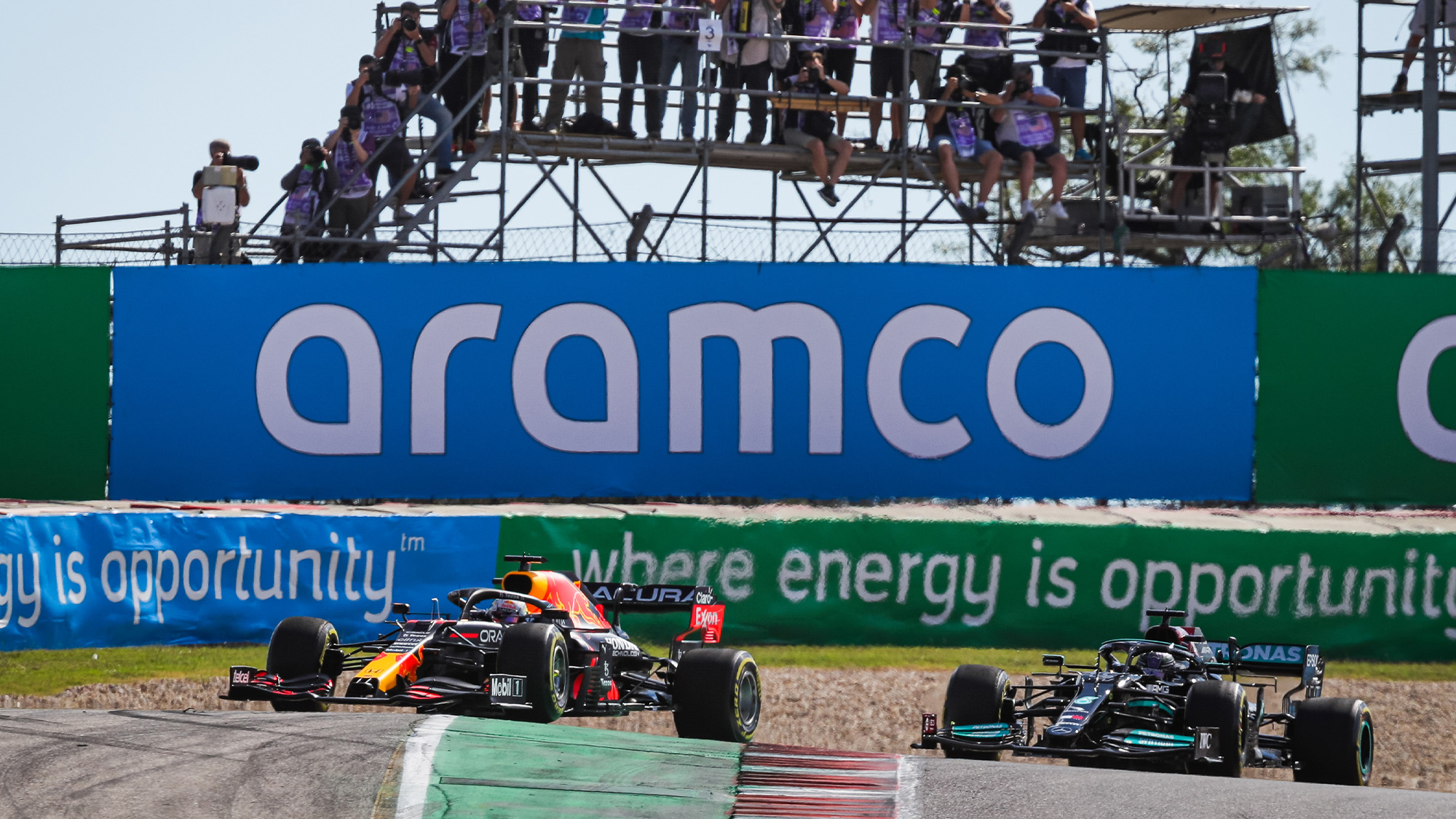 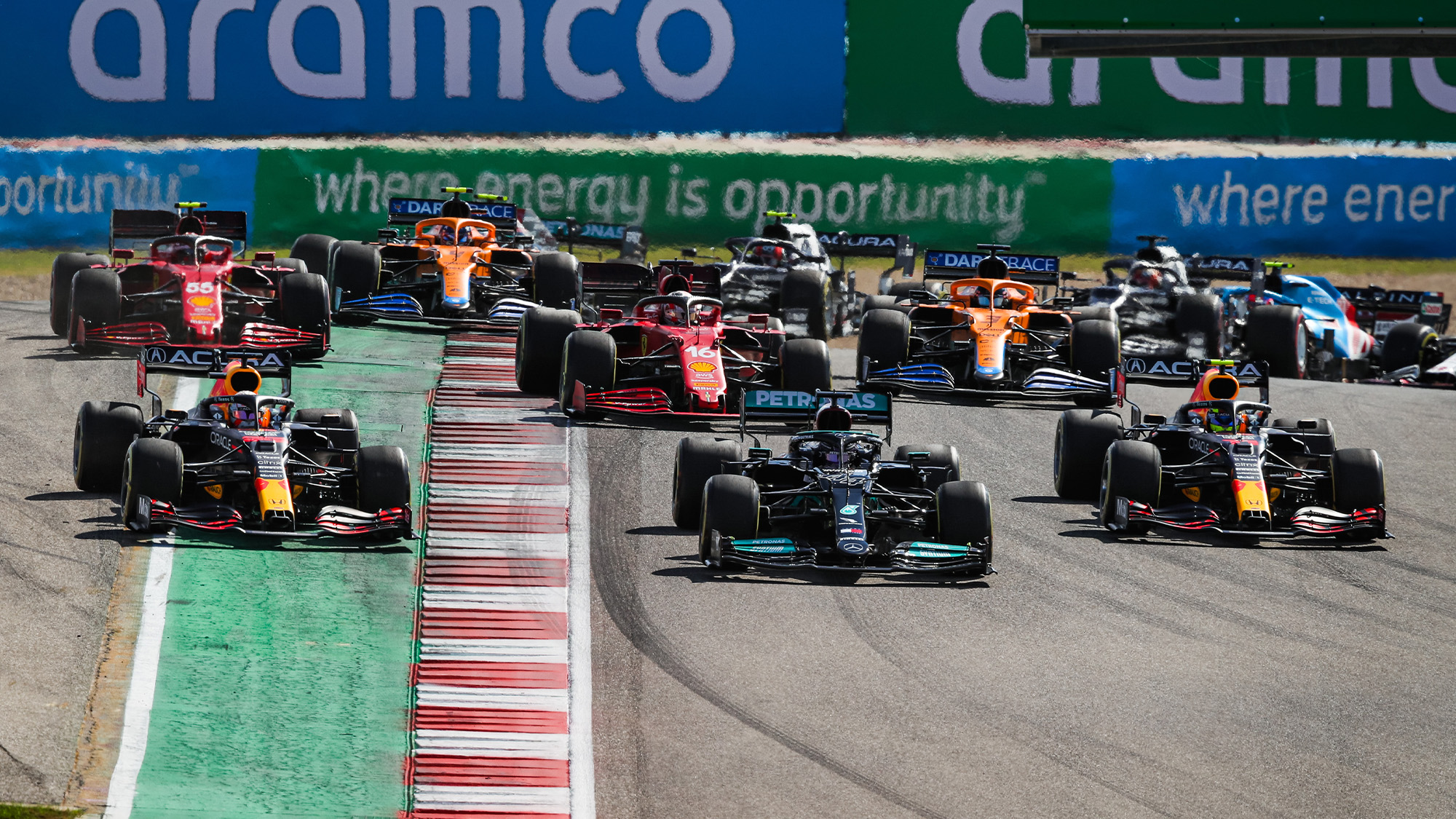 Perez (right) attempts a run for the lead

Hamilton got the better start and had the inside line, forcing his way past Verstappen who tried to use extra space in the run-off area to stay in touch before yielding.

“I thought I had a decent start,” Verstappen said. “Lewis just had a really good start then of course as soon as he was alongside me that’s pretty much it. I went around the outside to just avoid trouble from behind, as it is quite a tight hairpin, so I decided to got the long way around.”

Further back, Nicholas Latifi tapped Lance Stroll into a spin, and Nikita Mazepin was forced to pit with a loose headrest, but the first-lap action between McLaren and Ferrari caught the attention.

Lando Norris, Carlos Sainz and Daniel Ricciardo went three-wide into Turn 12, with Norris looking set to jump both before he needed to avoid contact with Charles Leclerc and back out.

“I was so scared!” Norris admitted. “The thing is it’s such a wide track and I knew it was three abreast and I knew Daniel was on the outside so I had to be careful, but then I couldn’t brake too late because Charles was just ahead. I was on the apex and Charles was coming pretty much… I was going to t-bone him if I went in any harder!”

That allowed Ricciardo to find a way through and also clear Sainz on the inside of the high-speed Turn 17, in a move that would prove crucial to their respective races. 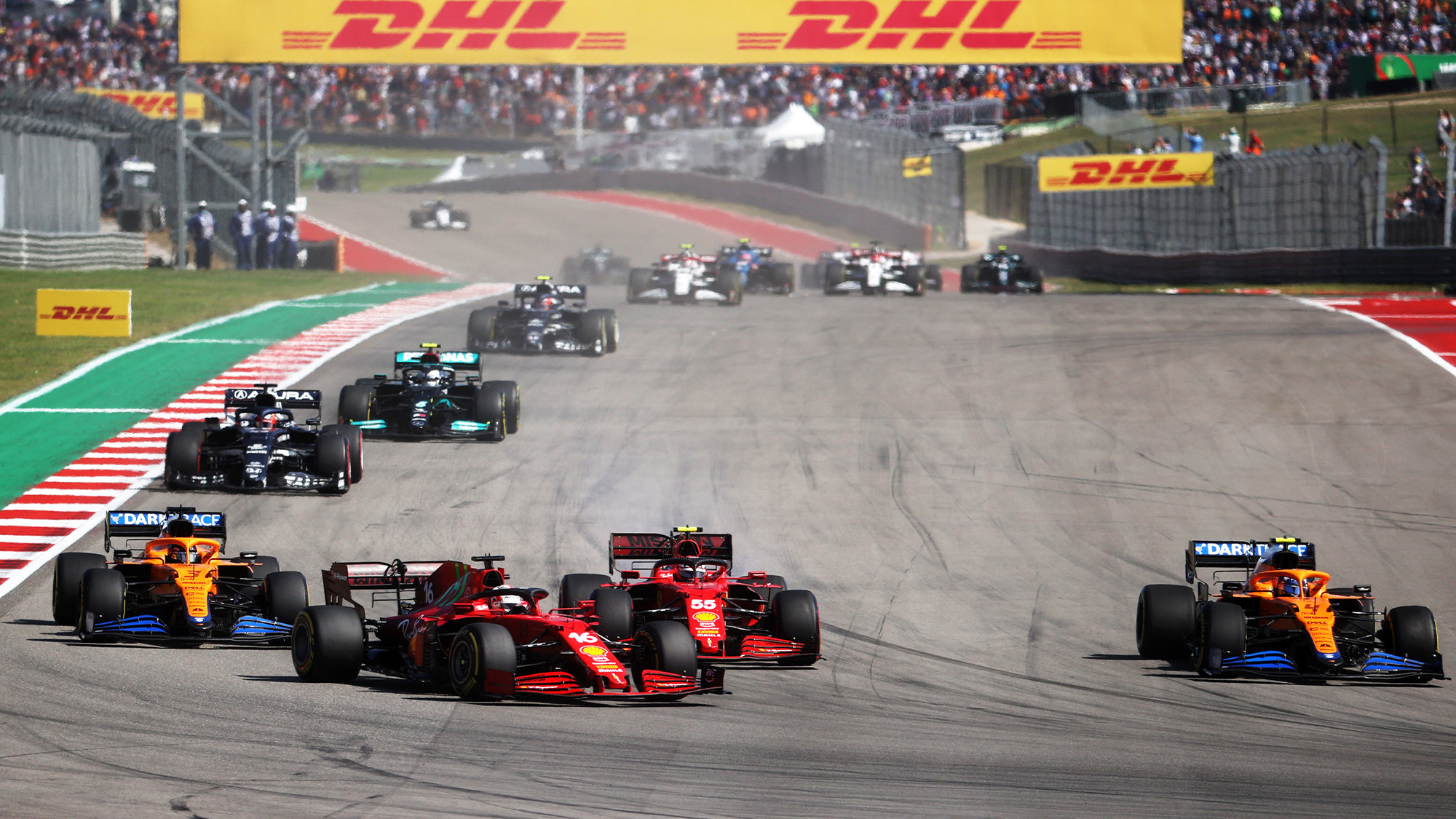 Norris had no luck in double McLaren assault on Sainz

But as the top three of Hamilton, Verstappen and Sergio Perez pulled away from Leclerc, it became clear Verstappen had a pace advantage. He could stay within a second of the Mercedes, before pulling the trigger on a very early first pit stop for hard tyres on lap 10.

Hamilton couldn’t respond, and although he tried to extend his first stint, a pit stop for Perez – one that Verstappen called for – forced Mercedes to pit three laps later to protect against the Mexican.

With track position, Verstappen looked comfortable as he sat over six seconds clear. But then Hamilton chipped away and reduced the deficit to three seconds before Red Bull again went early, pitting for another set of hard tyres on lap 29, giving him 27 more to do on his final set.

“We went very aggressive on the first stop after losing the lead in the start,” Verstappen said. “Then again in the middle stint Lewis was within that undercut range so we had to respond, go early again, and then the last stint was very long, in this heat especially.” 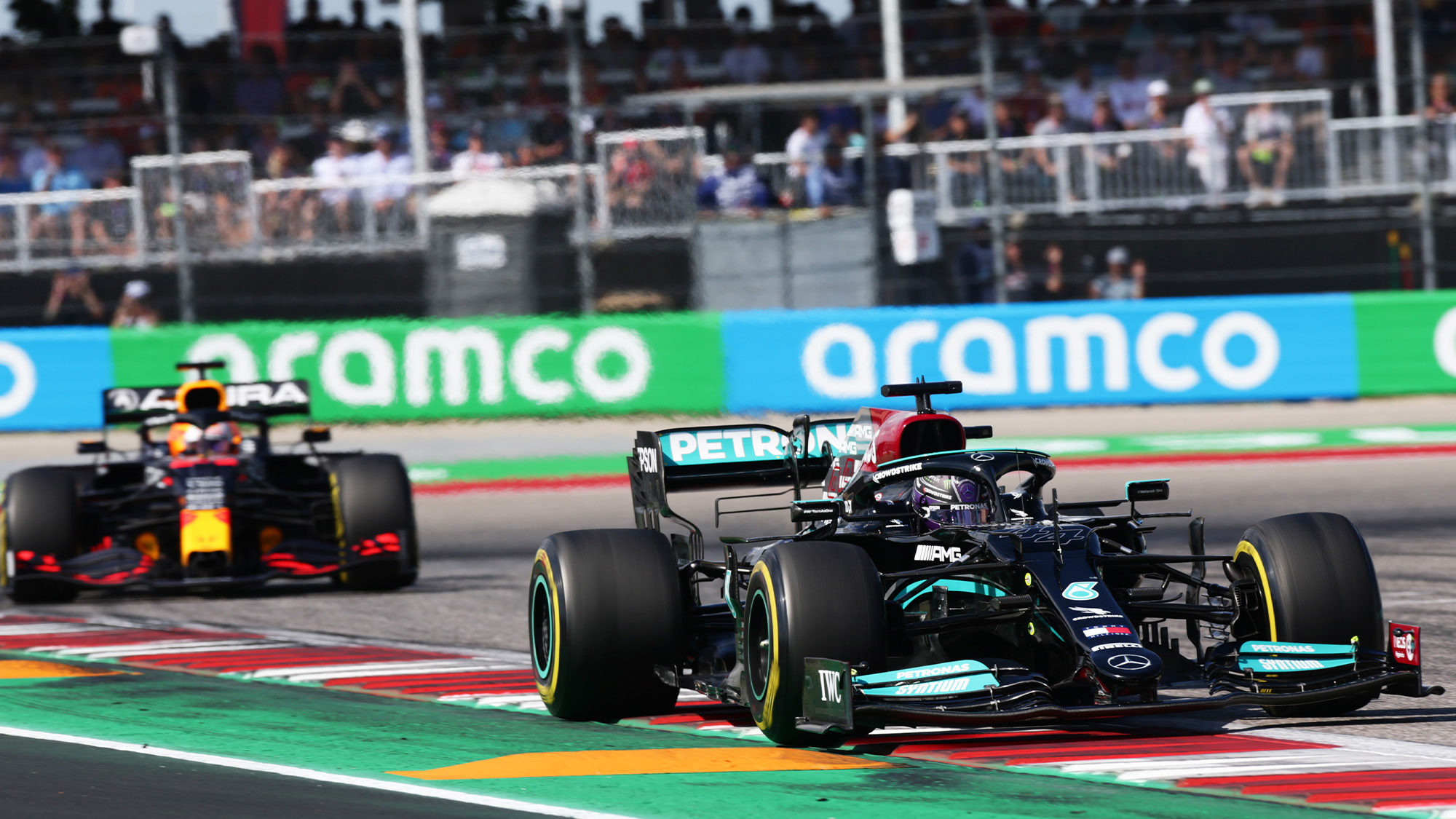 Mercedes knew it had to do something different, so Hamilton was told to go six laps further than his original target stop, extending his middle stint to lap 39.

While that was playing out, a rear suspension failure had accounted for Pierre Gasly, while there was entertaining action that tended to feature Fernando Alonso. Having started at the back, he’d climbed into points contention but grew frustrated after pushing Kimi Räikkönen wide at Turn 1, only for the Finn to complete his overtake into Turn 2.

Alonso called for Räikkönen to give the place back but the stewards deemed it unnecessary as the Alfa Romeo had been forced off. And his frustration only grew when he then threw a move down the inside of the other Alfa Romeo at Turn 12, running well off track on the exit but staying ahead of Antonio Giovinazzi, only to be told to return the position.

“They were normal battles but… the rules are a bit random…” Alonso said after his race was then ended early by a rear wing failure. “It’s the way it is. Unfortunately, for the fans here in America, they [received] today a show that they didn’t deserve.” 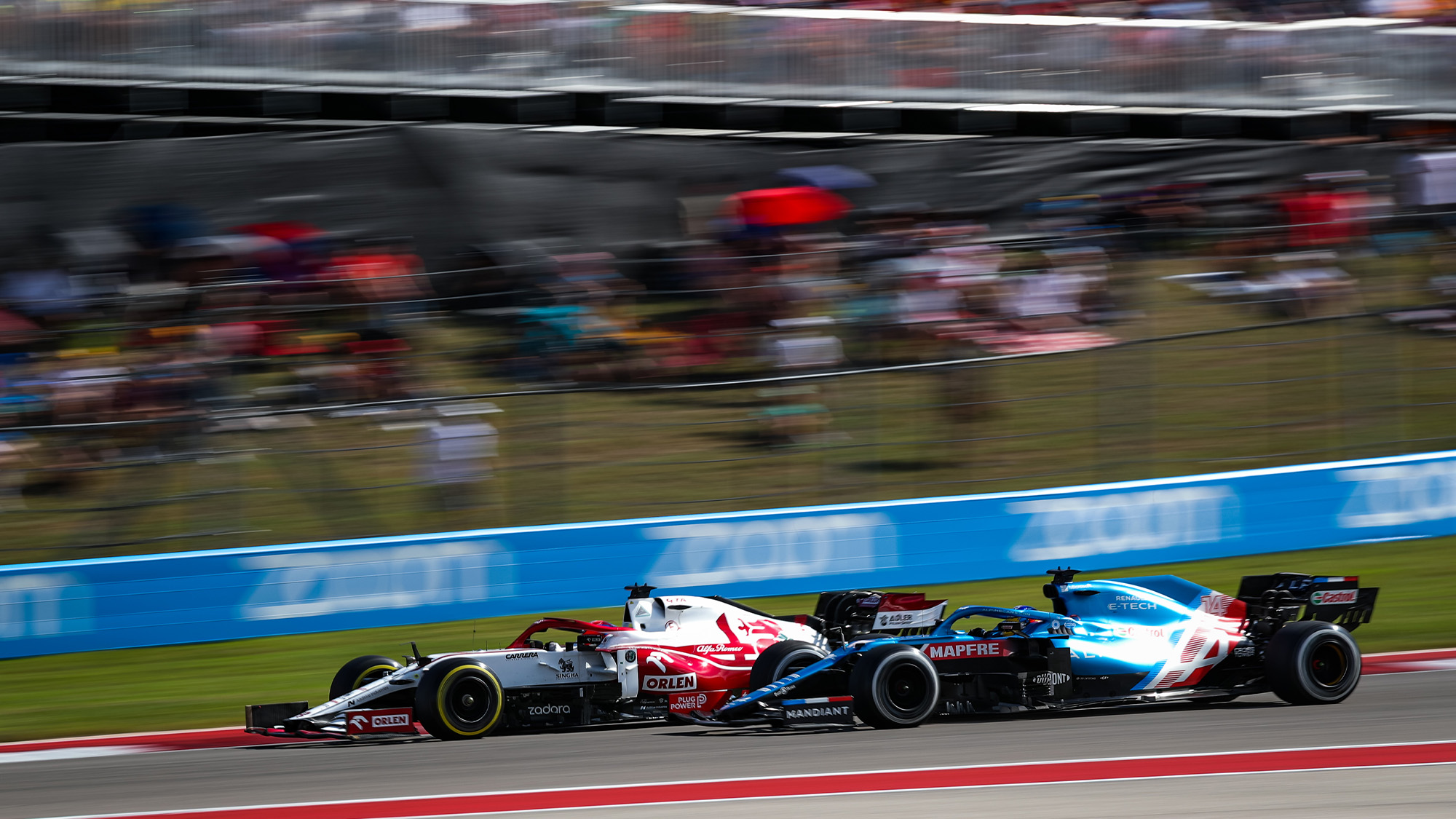 Alonso tangles with önen in one of his many Alfa encounters

Alonso’s fellow Spaniard had been in a similar situation after the first lap fight with the McLarens, having been told to give Norris a position as a result. He still ended up ahead of his former team-mate and chasing Ricciardo throughout the race as Leclerc pulled well clear, but a slow second stop cost Sainz any chance of jumping Ricciardo in the pits.

Sainz tried to pass around the outside of Turn 14 but the pair touched wheels, causing the Ferrari driver to call the move “a bit dirty” at the time but later accept it as on the limit.

“There was a bit of contact there, he pushed me wide,” Sainz said. “Obviously I was on the outside, so this kind of thing’s going to happen and it’s tough, fair, on the limit racing – because obviously he bumped me out and sometimes it’s a bit too much – but the problem I think was if we would have done a good pit stop, we would have undercut him and we wouldn’t have fought him.”

The contact came three laps after Hamilton’s second pit stop, and for the first few laps of his final stint he didn’t look capable of closing the nine-second gap to Verstappen. But then a fastest lap some two seconds quicker than the leader ignited the race, with Hamilton regularly taking a second out of the Red Bull.

It was asking a lot of the tyres, and Verstappen was saving his, so when the gap was pegged with five laps to go it looked all over. Then Hamilton closed in again, and the leader came across Mick Schumacher in the final sector.

As Verstappen and Hamilton crossed the line to start their final lap, there was just 0.8sec between them. But the leader’s first sector crucially took him out of DRS range and allowed him to hold on.

“It was exciting,” Verstappen said. “The whole race, the pressure was on, not knowing how quick Lewis was going to get you.

“We managed to hang on at the end, just enough within the tyres to push. With two laps to go I had the Haas in front of me, going into the last sector he was in front, and especially with worn tyres it is not easy to follow. Of course luckily then he gave me that DRS so whatever I lost I think it stabilised a bit because of that DRS.

“The last lap was all about trying to have a good first sector and beginning of the second sector but it wasn’t easy as the tires were really finished, but yeah, incredible to win here.” 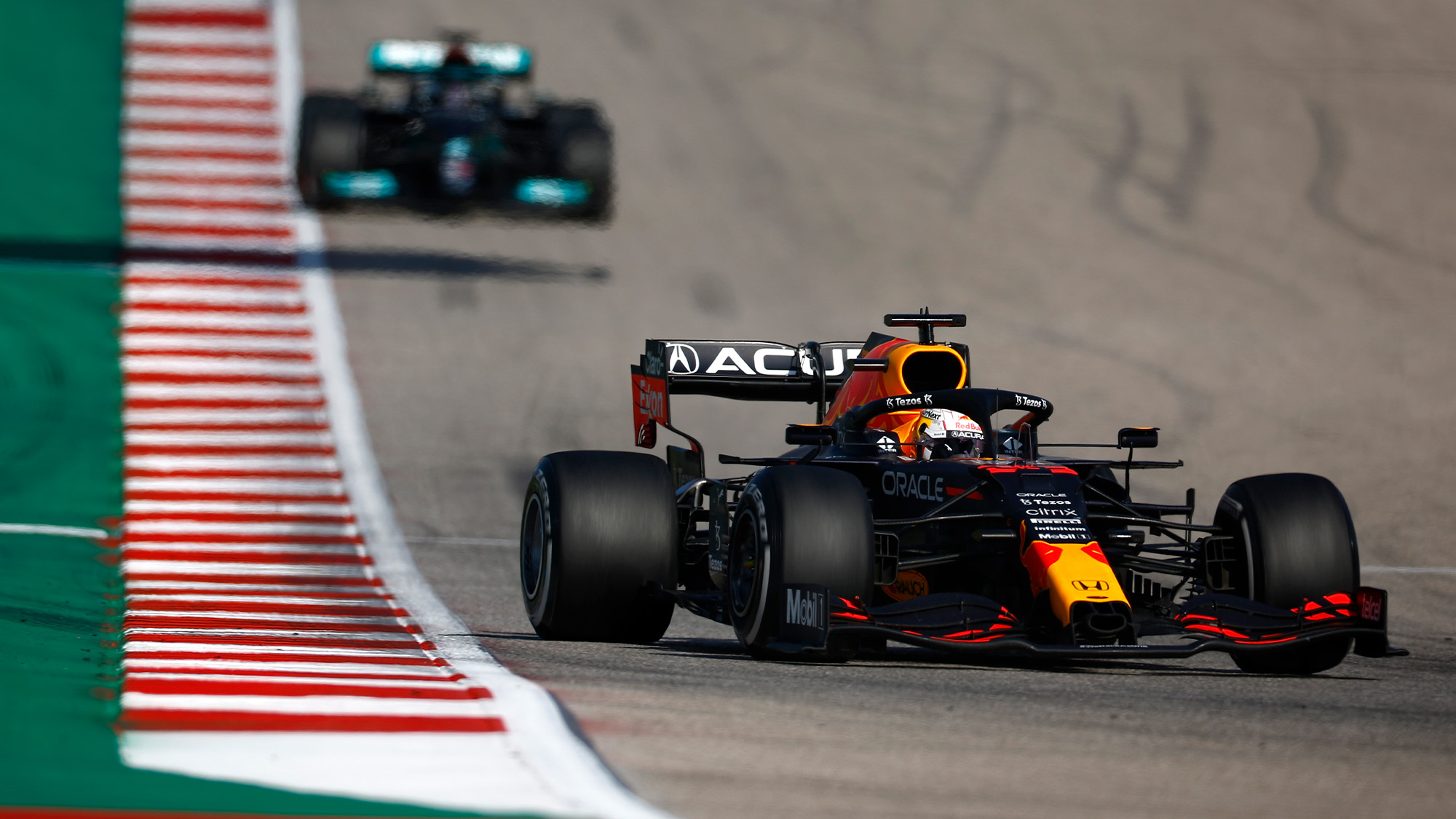 Fresher tyres for Hamilton saw him hunting down the race leader

After falling just short, Hamilton – who picked up the fastest lap – was philosophical.

“It was a fun race,” Hamilton said. “We had a good start. Then he seemed to be quite close throughout on the medium tire and then obviously they stopped extremely early. Tried to offset myself after that and was hoping it would give us a chance for fighting late on but I think track position was key today.

“I think they were quicker all weekend and on all tyres today. Just in the heat, that’s their real strength has shone through this weekend, a bit like other places – Bahrain this year – I did the best I could with what we had.” 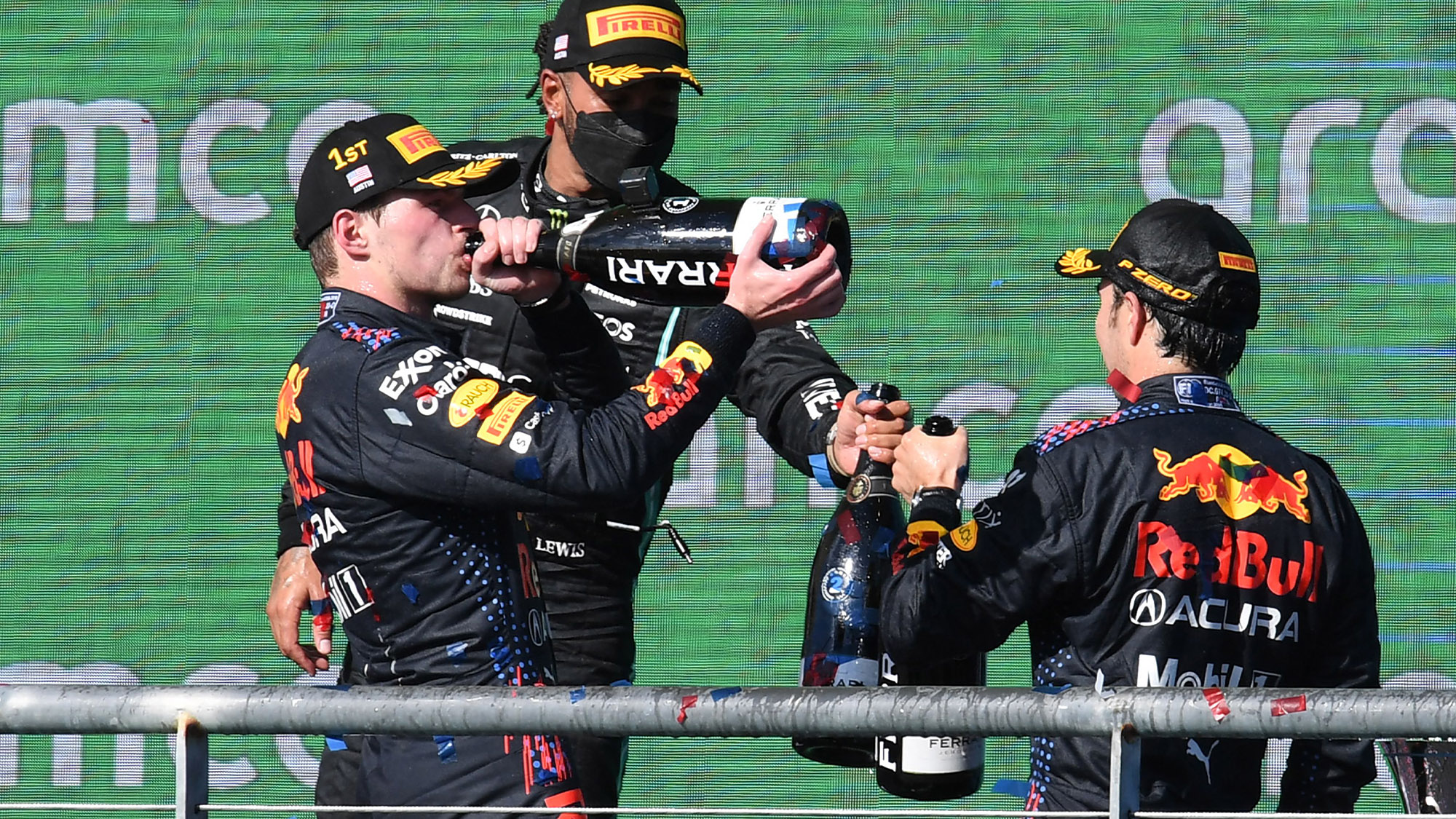 Perez was a distant third and exhausted after not being able to use his drink system after the first lap, while Leclerc ended up ten seconds behind the Mexican in fourth.

“The performance was just very, very good and I could see Sergio in front of me – only 10 seconds ahead – and actually in the last two stints I think we were a little bit quicker than them, so I was thinking about the podium but we just didn’t quite make it,” Leclerc said.

Ricciardo was 25 seconds further back in fifth, but at least held off Valtteri Bottas who recovered form ninth to take sixth from Sainz late on, while Norris, a solid drive from Yuki Tsunoda and Sebastian Vettel rounded out the points.

But it was the points that Verstappen took off Hamilton that were most significant. This was supposed to be a Mercedes track, one where Red Bull would try and limit the damage. Instead the gap is 12 points heading to two venues expected to suit the championship leader.

In front of a big crowd full of big stars, make no mistake, this was a big result.