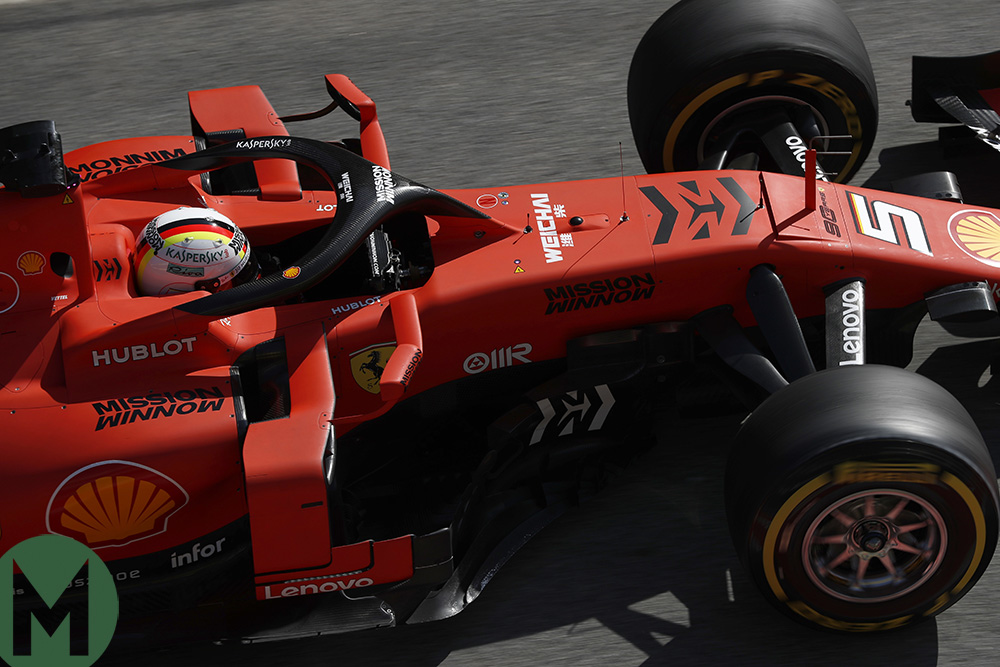 Sebastian Vettel and Ferrari topped the opening day of 2019 Formula 1 preseason testing at the Circuit de Barcelona-Catalunya in Spain, with his best mark set in the morning’s running. He remained clear of all rivals for the rest of the day.

Vettel topped the timing screens early in the day’s running using the ‘C2’ white-marked compound tyres, then later in the morning on shorter runs using the softer yellow-marked ‘C3’ tyres he posted a time of 1m 18.161sec that ended the morning’s running almost two seconds clear of the rest, then remained unmatched in the afternoon.

Vettel also topped the mileage chart, completing 72 laps before lunch and then having 149 laps on the board with around an hour of the day’s running remaining – he ended Monday having finished 169 laps.

Late improvements by McLaren’s Carlos Sainz got him second in the final order, with his 1m 18.558sec best, set on even softer ‘C4’ tyres, four tenths off Vettel’s mark. Sainz had, just after lunch, caused a red flag when his car “just stopped” at the end of the pitlane while attempting a practice start.

Romain Grosjean in the Haas was another to improve late on and his eventual 1m 19.159sec mark, set on C3 tyres, was around a second off Vettel’s best and got him third in today’s order. Grosjean also had technical problems earlier on, in his case the Haas stopped on track with a fuel pressure issue.

Kimi Räikkönen early in the day slid his Alfa Romeo into the gravel and got beached but was quickly back out and shortly after lunch vaulted to second place in the times 1.3secs shy of Vettel’s Ferrari, though the 2007 F1 champion was knocked down to fifth in the final order by others’ late improvements.

The Finn ended the day a minute early as his Alfa Romeo stopped just after the pit exit with an unexplained issue.

The returning Daniil Kvyat was sixth for Toro Rosso with a best effort just 0.002sec off Räikkönen’s.

Kvyat was followed by Sergio Pérez in the Racing Point, the Mexican’s 2019 car unveiled today after its livery was revealed in Canada last week.

Pérez ended the morning’s running in second behind Vettel with a 1m 19.944sec best lap, but slid to seventh in the final order after failing to improve his time in the afternoon.

Mercedes split its running, with Valtteri Bottas driving in the morning and reigning champion Lewis Hamilton in the afternoon.

Bottas ended the morning in third place almost exactly 2sec off Vettel’s best, while Hamilton all but matched Bottas’ time – though the pair ended the day eighth and ninth in the order as those around them improved.

Renault was another to split its driving duties, with new recruit Daniel Ricciardo taking over from Nico Hülkenberg for the afternoon. The pair however propped up the overall timing screens in 10th and 11th, with marks almost 3sec slower than Vettel’s pace.

Only nine cars took part in today’s test with Williams not running as it needs more time to get its FW42 ready, and its boss Claire Williams added today that running before Wednesday is now unlikely.