Sebastian Vettel says he was surprised when no contract to remain at Ferrari for the 2021 Formula 1 season was offered to him by the team.

Despite rumours at the time suggesting both parties were at the negotiating table over a new deal, the four-time champion has revealed that the team did not offer him a contract extension to remain at Maranello, and was informed by team principal Mattia Binotto over the phone that his services would not be retained after this season.

“There was no sticking point [on the contract]. It was a surprise to me when I got a call from Mattia saying the team did not wish to continue. No offer was on the table,” he told media ahead of the Austrian Grand Prix.

Vettel also provided a hint over what his future might hold, adding that he was considering his options both in and out of the sport.

“Obviously I want to make sure I make the right decision for myself and my future.

“I have a very competitive nature. I’ve achieved a lot in the sport and I’m motivated and willing to achieve more. To do so, I think I need the right package, the right people around me. So that’s what I’m looking out for at the moment.

“If the right opportunity should arise then it is quite clear. If that’s not the case then I’ll probably have to look out for something else.”

Asked whether a sabatical could be on the cards should no immediate option arrise, Vettel admitted that it was not something he is actively considering. 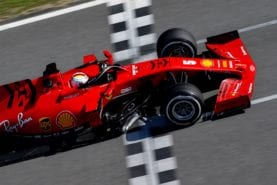 How Vettel’s Ferrari dream fell apart and what comes next

Sebastian Vettel’s aspiration of emulating his compatriot and hero, Michael Schumacher by winning a world championship with Ferrari looks to be over. Indeed, if the Covid-19 pandemic continues on and…

“I am of the conviction that if you are prepared to let’s say shut the door, then you should be prepared to shut that door, and not shut it and expect it to open again.

“I think you have to be aware of the decision that you are making at the time, and that’s why also I’m not rushing into anything.

“The next weeks and months will probably bring some more clarity.”

Ferrari announced during the break that Vettel would not be part of the team next season, and that Carlos Sainz would be replacing the German as partner to Charles Leclerc for 2021.

In the announcement, Ferrari said that both parties had reached an agreement to part ways, with Binotto saying the decision was “taken jointly by ourselves and Sebastian.” Vettel maintained that finances did not play a part in the decision.

Vettel moved to Ferrari from Red Bull in 2015, hoping to bring the Scuderia its first drivers’ championship crown since 2007, when Kimi Räikkonen took his sole F1 title.

Despite promising progress from Ferrari with its car, particularly in 2017 and 2018, the team failed to capture the Formula 1 championship as Mercedes and Lewis Hamilton successfully continued its hybrid era domination.

In recent seasons, Vettel has come under more criticism for high-profile errors during races which have derailed championship campaigns. Mistakes in 2017 at Singapore and 2018 at Monza all but sealed his fate and handed momentum over to Hamilton in the title race.

With the arrival of Leclerc at Ferrari, the team has since thrown its weight behind the Monégasque driver as its number one.