Which of the two leading F1 constructors had the upper hand at Silverstone – and who has the advantage going into the double-header? 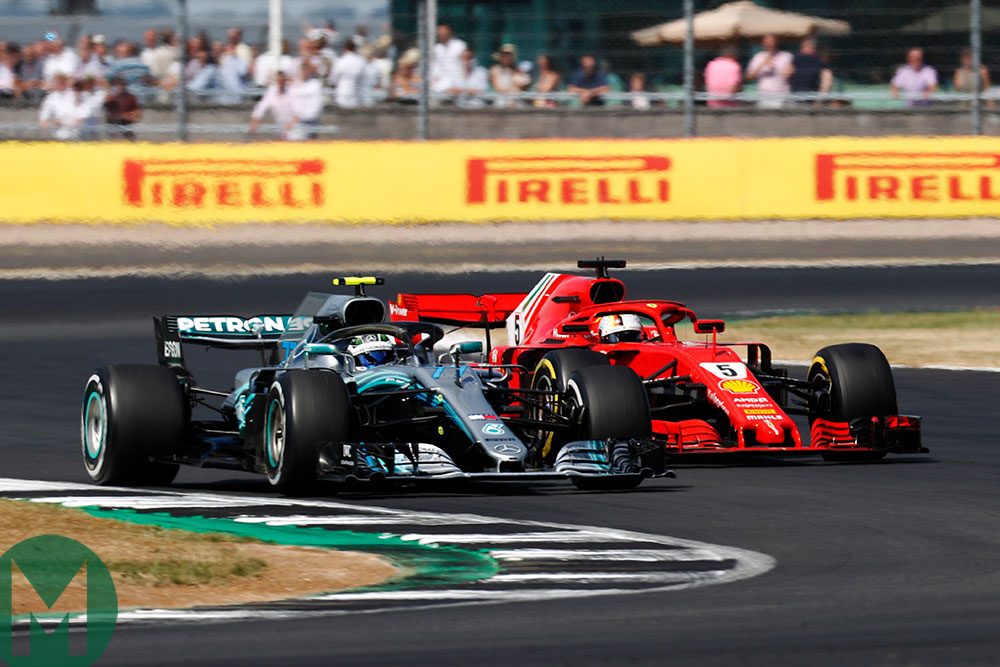 The battle between Ferrari and Mercedes is an intriguing one ahead of the Germany and Hungary Formula 1 Grand Prix double-header.

It’s clear both teams are on a very productive development path with their quite different cars, and de-coupling the respective effectiveness of those developments from the circuit-specific patterns of their different concepts is lending an extra dimension to the competition.

Some fans seem to doubt the assessment I reached about the British Grand Prix that Ferrari had a faster car than Mercedes on the day (an assessment, incidentally, that Mercedes personnel largely agreed with). Those fans claim that only Lewis Hamilton’s first lap knock from Kimi Räikkönen prevented him from being able to beat Sebastian Vettel on pure performance and that his drive to second place from the back, and his pace after his stop when he was catching Vettel at 1sec per lap, illustrates as much. While that’s not a ridiculous conclusion, it doesn’t stand up to closer scrutiny. So here I’ve collated a few figures to illuminate why not.

First, a reminder of how the races are run in the current era and how that impacts upon when we see the raw performance of the cars and when we don’t: if you have a faster car than your opponent and track position over him, you try to pull out a big enough gap to be out of his undercut range by the time the pitstop window opens. Typically, this can be anything between 1.5sec and 3sec, depending upon tyre degradation, length of the lap, pitstop time loss and a number of other factors. You always strive to have a big enough gap that even if he gets onto his new tyres a lap before you, you can pit the lap after and still emerge ahead.

Once you have that undercut gap, you will back off and judge your pace against that of your chaser and not take any more from the rubber than is absolutely necessary. In this way, you can maximise the potential length of your stint, giving you more strategic flexibility, and also it leaves you less exposed to a safety car. Should you just push on using your greater pace to increase the gap every lap, a safety car would potentially lose you all of that gap – and leave you trying to defend the restart laps on worn-out rubber.

That’s why, in the modern era, you never see a car simply disappear into the distance, ever further ahead of the pack every lap. At some point, you will be guided into just keeping that small undercut buffer behind you. That way, depending upon the fuel demand, you can either a) save fuel, ready to let rip with full power when it might be needed or b) waste fuel with an over-rich setting (this also helping to protect the engine) to make the car lighter because you’re now on schedule not to need all that you put in the tank. Upon rejoining, still with track position over your opponent, you will probably take the early laps easier than him – because you can afford to keep the tyres in shape whereas he’s obliged to chase you harder, just in case you actually have a problem.

In the early laps of Silverstone, Vettel simply blitzed the field (albeit with Hamilton having been spun to the back). The Ferrari’s gap over Valtteri Bottas’ Mercedes (unchallenged from behind and not compromised), at the end of the opening lap, was 1.9sec. On lap two it was 3.5sec, then 4sec, 4.5sec and 5.2sec on each subsequent lap. That was comfortably enough to be out of undercut reach and, from lap six onwards, Vettel backed off by around 0.5sec. He and Bottas were doing this in fully fuelled-up cars and on the soft tyres with which they’d qualified on in Q2.

From lap 16, as Vettel began paying for the early pace with his tyres, Bottas began nibbling into that gap by a couple of tenths per lap. From Ferrari’s perspective, that was no real concern. At 0.2sec per lap, Bottas would never have got anywhere near undercut range before the first stops. Ferrari brought Vettel in from a 4.5sec lead on lap 20, Bottas came in the lap after. Into the second stint, Vettel again began gently extending his lead over the Mercedes by enough to remain out of undercut range.

Bottas’ Mercedes was nowhere near the pace of Vettel’s Ferrari. But what about Hamilton’s? His early laps were a DRS-assisted blur through the midfield. By the time he’d reached the top-six, his tyres were pretty much finished. He pitted for new mediums on lap 25 – and on these he was the fastest man on track for the next six laps, taking 1sec per lap out of his deficit to Vettel. It’s this that gets put forward as the evidence of Hamilton having the pace to have won it, without the first lap incident. But that’s not comparing like-for-like. Hamilton was more than 20sec adrift of Vettel and no threat to him. Hamilton was charging all-out in his attempt to catch Räikkönen. Vettel was cruising and maintaining his undercut gap to Bottas, his only competition.

But what if we compare Vettel’s early lap pace to Hamilton’s post-pitstop pace? Then we can assume both were close to their maximum – though on different fuel loads and a different compound of tyre. So let’s put some numbers on those differences, taking Vettel’s first five flying laps and comparing them to Hamilton’s first five of the six laps between rejoining from his stop and the safety car (I haven’t counted the sixth as he was lapping Sergey Sirotkin).

Fuel weight: with around 105kg on board to start the race, Vettel’s first flying lap will have began with 103kg, reducing by around 2kg each lap. Each 10kg of weight costs around 0.35sec around Silverstone. So, his initial fuel weight penalty would be around 3.6sec on his first flying lap, down to around 3.33sec on his fifth.

By the time Hamilton rejoined after his first stop, he would have had only around 55kg on board, costing him around 1.93sec, down to 1.65sec by his fifth post-stop lap.

However, Hamilton was on the medium tyre, which was around 1sec per lap slower than the soft on which Vettel had been driving in that first stint. But it also degraded – according to Pirelli’s numbers – at about half the rate (0.05sec per lap compared to the soft’s 0.1sec per lap). For the purposes of the comparison, we’ve ignored the unmeasurable track improvement as the race went on and more rubber was laid down.

Taking those numbers as our order of magnitude guides, we get the following picture:

Contrary to the impression given by Hamilton catching Vettel at 1sec per lap for a few laps after the stops, we can see there is virtually no difference in the corrected pace of Vettel’s first five laps with those of Hamilton as he was chasing Räikkönen later (Vettel’s average an insignificant 0.026sec faster). Hamilton was only catching up because Vettel was under no threat and cruising. Furthermore, the attached comparison almost certainly favours Hamilton slightly – in that the track will have been faster by laps 27-31 than it was on laps two to six, and that Vettel was not motivated to be on his absolute limit as he was comfortably pulling away from Bottas, whereas Hamilton was absolutely motivated to be on full attack, chasing Räikkönen with half the race gone.

This all tallies with what the teams were seeing in how the lap time of each car was being derived: that the Ferrari was as fast as Hamilton’s Mercedes through the corners and slightly faster down the straights. The margins were small, but the Ferrari was faster at a Silverstone that should, in theory, have played to the Mercedes’ main remaining strength – it carries less drag for a given level of downforce, helped by its slightly longer wheelbase.

We now head to a track (Hockenheim) where the two concepts might be expected to be quite equally matched, followed by another (Hungaroring) where the Ferrari’s downforce advantage might be expected to put it ahead (though possibly behind Red Bull). But that’s assuming the big development guns of one or the other teams aren’t going to change the picture yet again.

We are witnessing the two best-funded, most technologically-advanced F1 teams of all time vying with each other to make the fastest F1 car of all time – and which car that is seems to be changing almost race by race. Which of them can better maintain this brutal grind will likely decide the outcome of this championship.