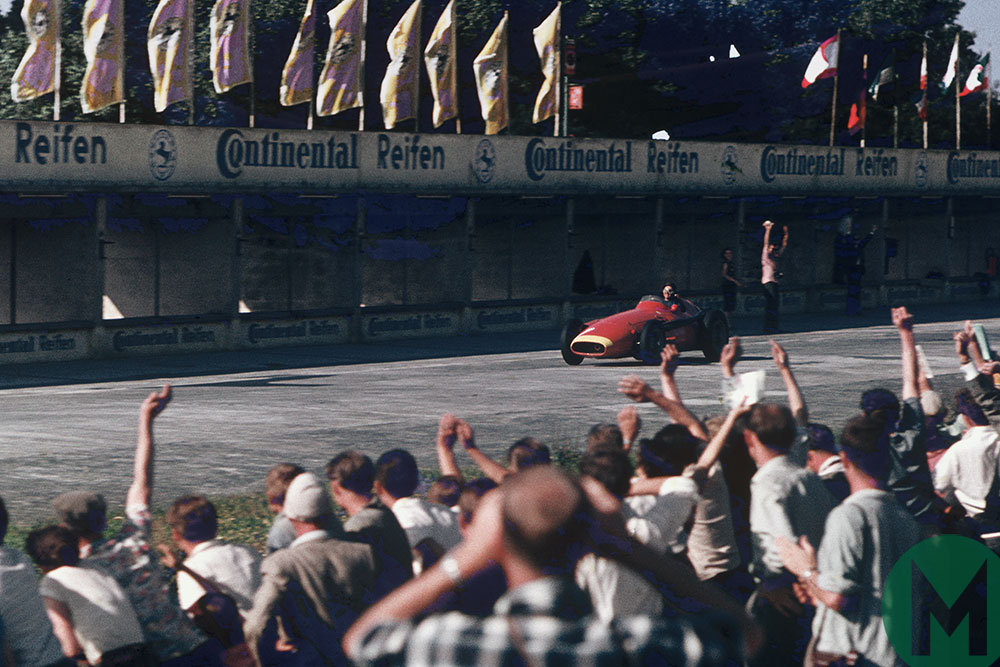 It’s often not easy to apply context to greatness. Juan Manuel Fangio died on this day in 1995, and few adjectives capture how giant a figure departed from the stage.

“The bald world championship race statistics tell the story: Fangio drove in 51 premier-level grand prix races in the period 1950-58, starting all but two of these from the front row — 29 from pole. He set 23 fastest laps, won 24, and was placed second 10 times, third once, and fourth six times.”

And as with the greatest performers, Fangio saved his best for last. Entering the 1957 German Grand Prix, well on the way to his fifth world drivers’ title, Fangio’s reputation was already towering.

Yet in this one at the mighty Nürburgring he, as Denis Jenkinson had it, “surpassed himself”. And we’ve found British Pathé footage of the race, which you can watch below.

Fangio at the Nürburgring in 1957 has gone into folklore, yet – with that context point again in mind – sheer repetition should not be allowed lessen the impact of his other-worldly showing.

It all hinged on that Fangio planned a mid-race pitstop for fuel and tyres – a not uncommon tactic at the time – while his Ferrari rivals, Mike Hawthorn and Peter Collins, ran non stop.

Fangio in first place in his classic Maserati 250F built an advantage that should have been sufficient to complete his halt and return at least close to the Ferrari pair. But you know what they say about best laid plans.

“Fangio had arrived with 28sec lead, but slowing down and starting off again after being 52sec at the pits put him over three-quarters of a minute behind the two Lancia/Ferraris.”

What came next over the next 10 laps is likely still Formula 1’s ultimate comeback drive. At first the gap plateaued, but then Fangio reeled off the most extraordinary succession of lap records.

“For three laps, while his tyres were new and the tanks heavy with fuel, Fangio made no impression on the two Lancia/Ferraris,” Jenks noted, “but lap 16 saw the gap reduced to 33sec and the next time round it was 25.5sec.

“The Ferrari pit became frantic and urged the two Englishmen to greater things but there was nothing they could do, and Fangio was smiling happily to himself as he first of all lowered the lap record to 9min 28.5sec, then to 9min 25.3sec. 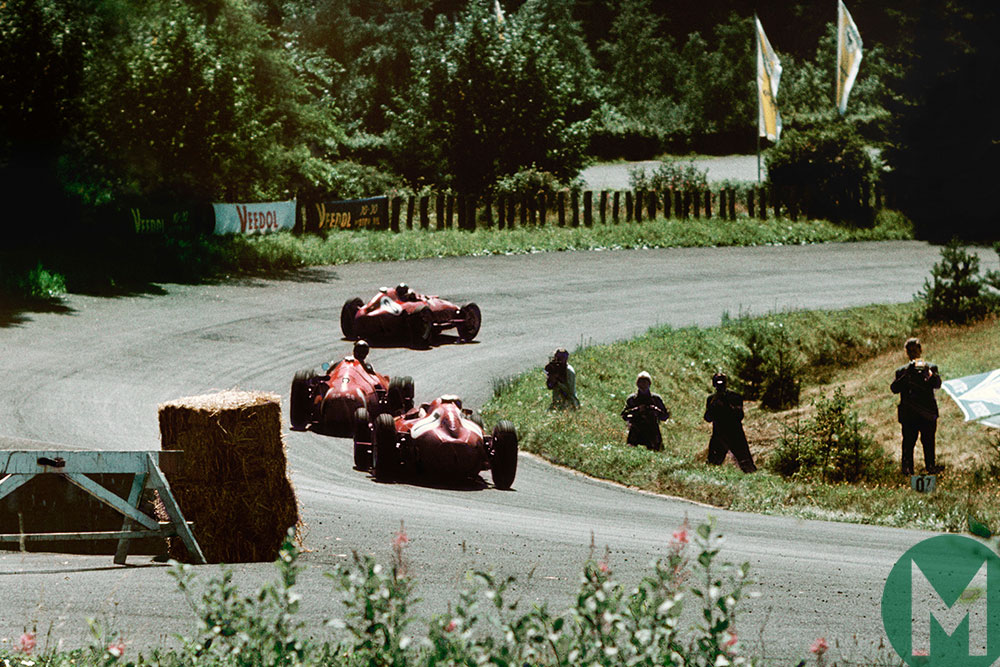 “On lap 19 he did 9min 23.4sec and the gap was only 13.5sec, and Hawthorn and Collins knew their race was run, for when ‘the old man’ gets in a record-breaking groove there is no one to stop him, especially on the Nürburgring.”

Fangio’s effort then got even more stunning, as he set a mark eight seconds under his pole time. “Then came the most shattering announcement of the whole race, ‘Fangio has just lapped in 9min 17.4sec!’ – an unbelievable record but obviously true for he had gained 11sec on Hawthorn in 14 miles,” Jenks continued.

Plus Hawthorn was no sitting duck for Fangio, even after the Maestro got by to lead with a lap and a half to go.

“This was the Hawthorn everyone likes to watch, the never-say-die Hawthorn who will fight against overwhelming odds to the bitter end,” Jenks noted.

“For that last memorable lap Hawthorn lost only a few yards on Fangio, turning in a time of 9min 24sec, but to what purpose when Fangio had done 9min 17.4sec?

“However, one slip by the world champion and Hawthorn would have been back in front, But it’s because he doesn’t make such slips that Fangio is world champion, and he led the Lancia/Ferrari over the line by barely 4sec.”

With the race win Fangio wrapped up his fifth and final title. And more importantly, as Jenks observed, he also had “put everyone in their place on the toughest grand prix circuit in Europe.”

Rivals were suitably in awe of the performance. While Fangio himself – with echoes of Ayrton Senna’s Monaco 1988 qualifying – struggled to comprehend what he had just extracted from himself. In his case, he was unable to sleep for two nights subsequently. 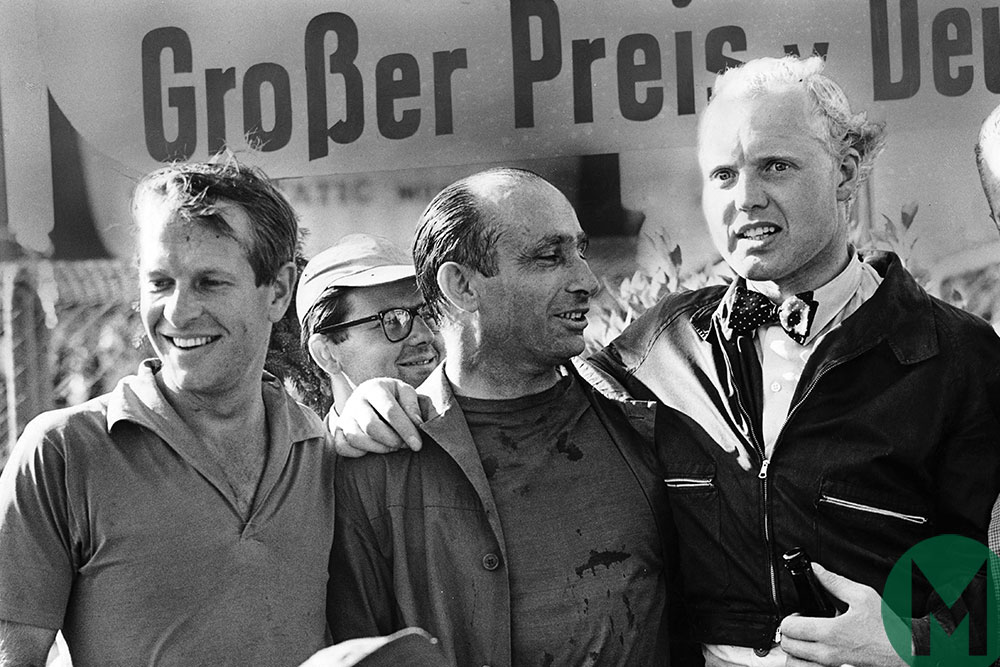 It was, he admitted, a peak that he had never scaled before, and was certain he would not be able to scale again.

In a sense it therefore was fitting that this was Fangio’s final F1 win. In a wider sense too it marked an end of an era. This was the final win for Maserati as a constructor as well, and more broadly the F1 world championship’s first era was drawing to a close. Vanwall would win the final two rounds of the ’57 season. F1’s British invasion was just beginning…