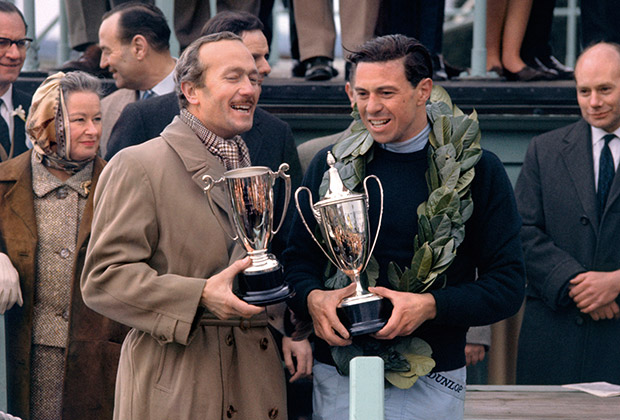 The latter was often accused of being unable to run more than a single competitive car. There was truth in that: Clark was all he needed. Things might have been different, however, had John Surtees not jumped ship at the end of 1960.

It was obvious that John was as fast in cars as he was on bikes from the moment he tested an Aston Martin DBR1 and a Vanwall at record pace at Goodwood late in 1959. His apprenticeship was swift and sure.

He made his Formula 1 debut with Team Lotus the following May, finished second in his second GP, the British at Silverstone in July, and would have won his third, the Portuguese at Oporto (from pole and with fastest lap), but for bad luck and inexperience.

Chapman had found his man. 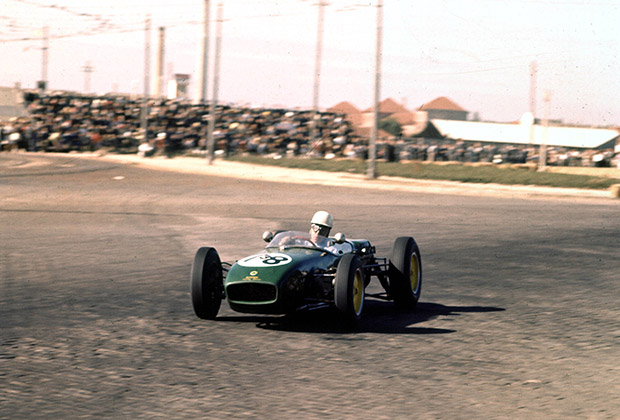 Clark made his GP debut with Lotus that same season. With more experience of cars than Surtees, he was extremely impressive – he finished third in Portugal – but was matched for speed and shaded on confidence by a multiple bike world champion used to operating at the highest level. Surtees shone on the occasions when the less worldly Clark still felt out of his comfort zone: i.e. across the tramlines and cobbles of Oporto as opposed to the reassuring familiarity of Brands, Snet and Oulton.

That’s why Surtees would have been Lotus’s number one in 1961, with Clark as his chosen team-mate, had Chapman handled the release of incumbent Innes Ireland with more finesse. Surtees wanted no part of the resultant shenanigans and walked away from the most competitive drive of his F1 career.

United by circumstance, Surtees and Clark had quickly become friends – Jim was best man at John’s wedding – but it’s impossible to know how well they would have functioned as team-mates. One thing is for sure, however: Clark would not have fazed Surtees. 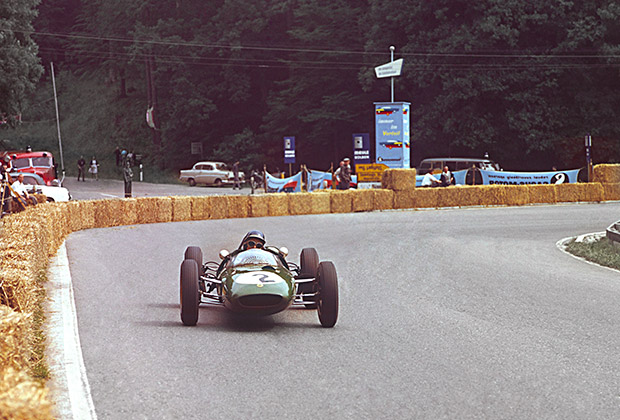 John had never heard of Jim before their Formula Junior dice at Goodwood in March 1960 – Surtees’s first race on four wheels – but after 10 frantic laps he had drawn up a basic outline of him: Clark was quick and had the better car – a Cosworth-powered Lotus versus a Tyrrell-run Cooper-Austin – but was beatable; Surtees had led until baulked by a slower car.

He saw no reason to change his opinion after their first season together.

Nor does he today.

Clark and Lotus oversaw a 1.5-litre formula abundantly blessed by driving talent. BRM’s Graham Hill, who had plenty of natural skill, thank you, also had a happy habit of hoovering up bits and pieces from the top table; Dan Gurney would only discover at Clark’s funeral just how highly Jim rated him; and Jackie Stewart – Robin to Clark’s Batman – was the boy wonder/coming man. 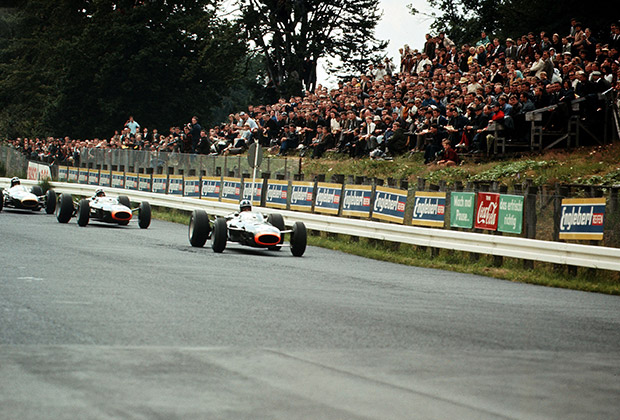 Surtees, however, had proved he had the ability to beat Clark in equal equipment. Had he stayed at Team Lotus, yes, Jim might have sprinted from him once Chapman swaged that bathtub monocoque around the Scot. Might.

And, no, the dictatorial Chapman probably would not have enjoyed Surtees’s less compliant, more studious methods. Unless, that is, he felt he had the two fastest drivers of the time at his disposal – which, in this writer’s opinion, would have been the case in the aftermath of Stirling Moss’s 1962 Goodwood smash. (Moss and Surtees set joint fastest lap in that ill-fated Glover Trophy.)

Instead, after a season spent treading water in a second-string Cooper, followed by a season with Lola seeing all sides of the F1 business – locating funds, creating and tuning the chassis, dealing with suppliers and, only then, racing – Surtees felt ready for Ferrari in 1963. It wasn’t Team Lotus, nor was it Hill’s revitalised BRM, but it was the next best thing. 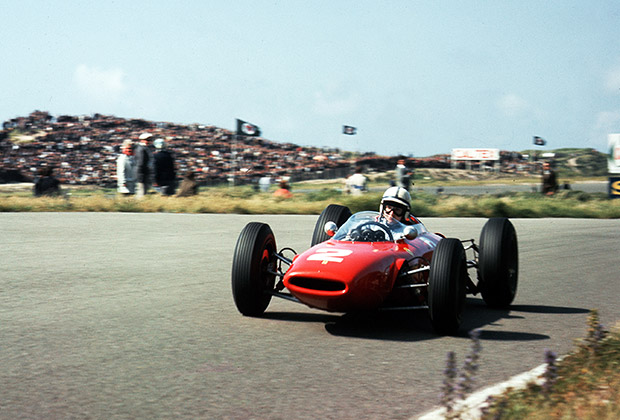 Surtees was so well regarded that Enzo went against his nature and asked him twice. The first invite occurred at the conclusion of 1960. John, sensing a feeding frenzy even before the debut of the Sharknoses, politely declined. He might have become world champion in 1961 had he accepted but does not regret his decision. Sure enough, the Scuderia he arrived at in 1963 was anaemic, drained by insurrection, defection and defeat.

“A lot of the team had disappeared along with [Carlo] Chiti, which was probably no bad thing,” says Surtees. “Luckily, the project engineers, including [Franco] Rocchi, were still there. It was a new beginning. I had been in that circumstance before, with MV Agusta. They, too, were down in the dumps to begin with. At Ferrari, however, there was an air of expectancy even though I knew that the F1 car was going to be an interim.”

But first: Le Mans. Surtees, a 24 Hours novice, would have won it, too, had not fuel sloshing from an unclicked filler cap been ignited by a brake light when luckless co-driver Willy Mairesse was at the wheel. 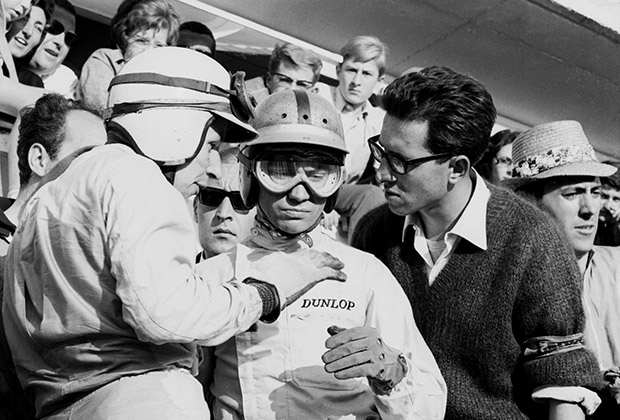 “Any Formula 1 development at Ferrari had to wait until after that race,” says Surtees. “That was always the case while I was there. It was a problem that plagued us.”

The Dutch and French GPs were upon the Scuderia within a fortnight. (The Belgian had been the week before Le Mans.) Only then was it awarded breathing space. Surtees, in a lone 156, qualified fifth and finished second (and set fastest lap) behind a runaway Clark at Silverstone in July. Then came the Nürburgring’s German GP in August.

“I thought that the ’Ring might give us a chance,” says Surtees. “I knew Jim as a driver very well. I respected him, but I felt I could harry him, particularly through the first section of the circuit proper – lots of bends, one after another. The ’Ring in its old form [hemmed in by hedges] was a bit of a tease, a bit of a leveller. A driver could make up time there. 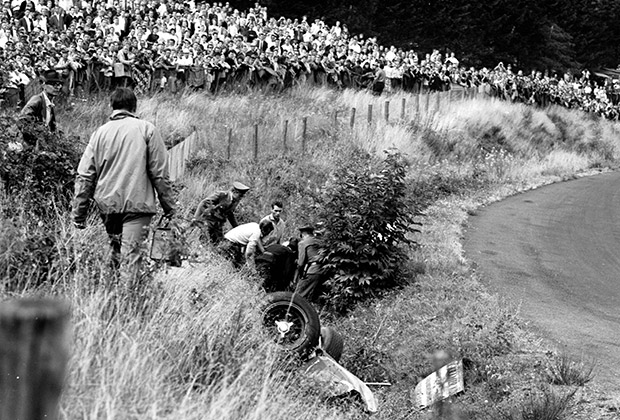 “Our 120-degree V6 was a good little engine, although it didn’t have the power of the V8s. Ferrari fitted Bosch direct fuel injection to make up for that. If conditions and its set-up were perfect, it helped. But it could make things worse. What extra power it generated was higher in the range, where it was hazardous to the engine; it could cause valve spring problems. Had we been able to rev safely to 11,000rpm, we would have been competitive.

“We didn’t test at the ’Ring – that would have been a luxury – but we spent a little time with Bosch altering the operation of the mixture control and this brought about an improvement.”

Surtees, who had successfully raced bikes at the ’Ring, who might have won the 1962 German GP for Lola had a dawdling Porsche not scuppered his planned last-lap move on Hill, and who had won the Nürburgring 1000km sports car race (with Mairesse) in May, recorded the fastest lap (by 16 seconds!) on the opening morning of practice. 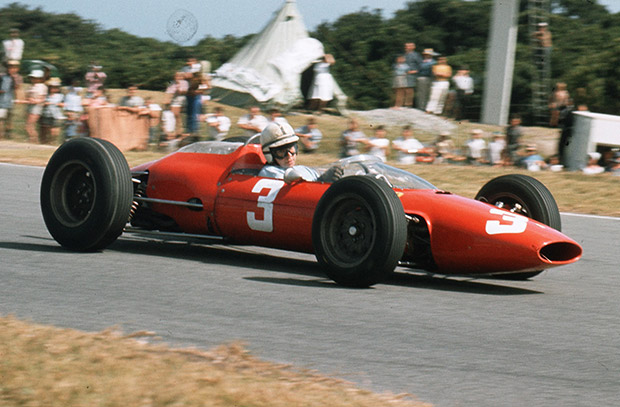 A worried Clark, who was 2.6 seconds quicker in the wet afternoon session, had his engine changed overnight. So did Surtees. Their battle for pole, however, would be stymied by a crack in the latter’s chassis and Clark pipped the delayed Surtees’s first-day best by just nine-tenths. Nobody else got within seven seconds.

“The Ferrari was not as efficient as the Lotus in how it used the road: it tended to go sideways across it rather than down it,” says Surtees. “We got it so that it was driveable in a Cooper-ish sort of way and it didn’t give me any worries at the ’Ring. I felt confident.

“If you went quickly enough there you would fly, so damper settings were critical. But I had a tubular chassis that flexed a bit in any case and I ended the race soaked in petrol because the saddle tank split. I still carry the scars as a reminder of that day.” 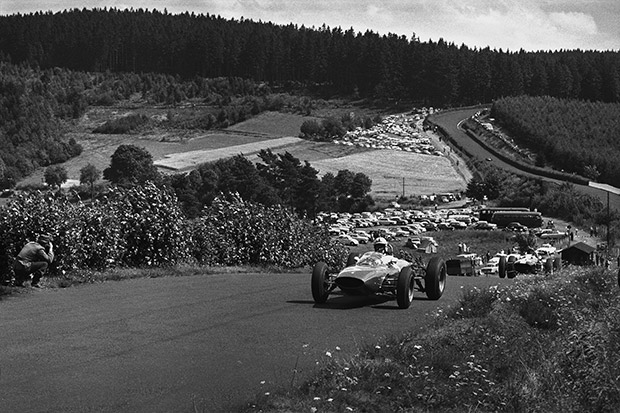 Surtees started second and, as he had hoped, got his hooks into Clark when the Scot’s usual rocket start fizzled out with an intermittent misfire that hampered him for the entire distance. Only Surtees, however, was within striking distance of this chink in the Clark/Lotus armour. The rest, bar a first-lap burst by BRM’s Richie Ginther, were left for dead as these two future world champions slugged it out.

It was not until lap nine that Clark’s spirit – and tow – was broken by the race’s fastest lap, Surtees circulating only three-tenths slower than his practice best. By lap 13, the Lotus, having been forced to go faster than it wanted to, began to suffer its ZF gearbox gremlin. Surtees, meanwhile, pressed on to score his first GP win on four wheels.

“I was in a rhythm,” he says. “I was enjoying myself. That feeling of being at one with your machine always gave me a lot of satisfaction. I got satisfaction from passing Jim, too, but the nicest thing about that day was seeing all the smiling faces in our pit. They were so pleased. 1962 had been a dreadful season for them and my victory picked them up a bit. It showed them that they could be successful again in F1.” 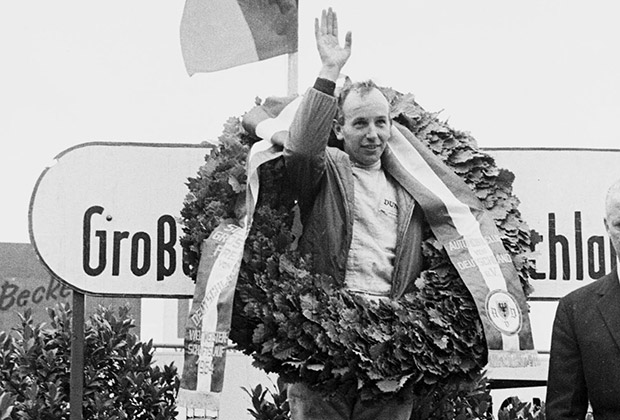 Remarkably, this was the only occasion in his 72 GP starts that Clark finished second. It was apt that the driver who relegated him 50 years ago last Sunday was the team leader he never had.