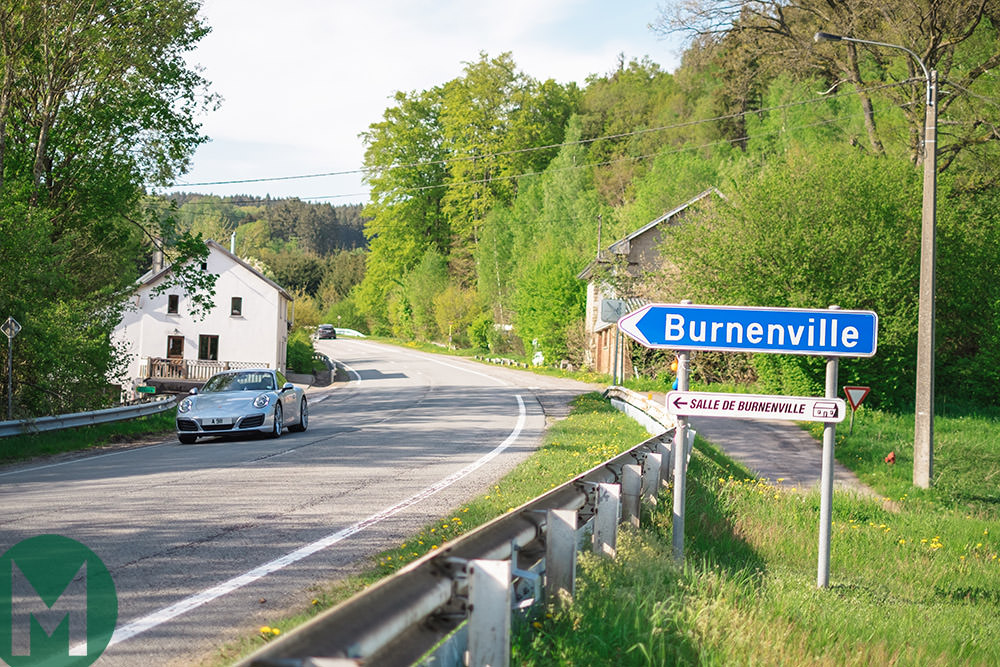 Rarely has it been thus: a weekend at Spa-Francorchamps where there’s not a jacket in sight. Cover is often sought when up in the Ardennes hills, but usually to escape the unrelenting rain rather than the baking sun. But such was the case in early May when the World Endurance Championship stepped into the unknown at Spa and kicked off its ‘superseason’, an 18-month campaign featuring two races at Le Mans while the WEC switches to a winter season.

As with so many major racing events in the modern era, particularly those shown live on television, support races were few and far between. Although our hands were full arranging this month’s cover shot, a paltry and solitary offering of Benelux Porsche Cup meant an uncommon amount of spare time to make use of between practice sessions.

Luckily, we had someone else’s Porsche to make use of, so there was only one thing for it: shun the Porsche races and take our own off to retrace the old circuit.

Anyone who’s been to Spa has, knowingly or not, most likely driven much of the circuit themselves. It’s hard to avoid.

Only did it twig that I’d been negotiating the old ‘straight’ back to Blanchimont via La Carierre on my maiden trip – and that was on the way home from the cold, damp Stavelot campsite.

This time more organised, there’s only one place to start when you’re heading off in the footsteps of Rodríguez, Amon and Siffert, Gurney, Clark and Moss, which is the gates at Les Combes. The corner has done an about-turn since the circuit was shortened and now heads right at the end of the long Kemmel Straight. But before 1979 it would hook left, a long fast turn with open fields falling away to its right flank, earth banks to its left. The view from the apex is the same, save some larger and more sprawling trees. But the sense of speed is now difficult to comprehend, as they would fire along the best part of a kilometre on the Kemmel and arc away toward Burnenville, instead of today’s heavy stop.

It’s here, at the old left-hander, that Brian Redman’s Formula 1 career all but ended when the suspension collapsed on his Cooper. And here that Pedro Rodríguez cartwheeled the Armco when he failed to spot the umbrellas popping open as rain began to fall.

Exit the corner and the road falls onwards and downwards, slowly undoing the big incline recently conquered at Eau Rouge and Raidillon. Ignore the junction that adjoins the main road, for the benefit of this, and you’re barrelling down towards the fearsome Burnenville.

‘Spine-tingling’, is how DSJ described it, and when you picture a gaggle of 917s and 512s, or Matras and BRMs, Lotuses, McLaren and Ferraris, it’s easy to imagine why.

The corner claimed the lives of Chris Bristow and Alan Stacey in the space of a few laps, and broke Stirling Moss’s legs the same weekend. Fast but deadly.

Moving through, speed still building through Malmedy corner – the chicane, introduced in 1970 much to Jenks’ chagrin, remains in the shape of the slip road off towards the E42… – the long Masta straight sprawls into view. Though straight it is not. Not least with its (in)famous crease through its middle: the fabled Masta Kink.

‘Many a well-known driver has frightened himself through this left and right kink,’ wrote Jenks in 1965, the same year Richard Attwood collided with a telegraph pole when he hit a river of water running across it.

“There were no marshals,” the 1970 Le Mans winner told Simon Taylor over lunch in 2008, “nobody around, except a couple of spectators watching the race in the rain. I gesticulated to them frantically and they came over and lifted the car away from the pole… The car burned for 20 minutes.

“With nobody around, I would have died quite quickly.”

A year later Jackie Stewart nearly perished when his BRM overturned, having hit a pole and a cottage. Thankfully the quick-thinking Graham Hill and Bob Bondurant – themselves fresh from dealing with their own mishaps – dragged him eventually out of it. From the subsequent dangerously dirty ambulance, the Scot’s safety brigade began in earnest.

Conquer the kinks and the road continues on its way, the car still being aided by gravity, towards the banked, fast and satisfying Stavelot bend. Or continue onwards and you’ll find the old hairpin, though now you’ll hit a give-way junction with Porsche 356s proudly on guard in the windows of a classic car garage.

But the real interest is the earlier-on-the-road-later-in-the-history-books hooked bend back towards the circuit. On its inside is a pretty brick wall bridge, close to where Jenks would perch himself to watch.

It soon fires you back towards the ‘new’ circuit. Flat all the way, when the racing cars ruled these roads, jinking through no-name kinks and the blind La Carriere.

But that doesn’t mean it’s a relaxed run. Fangio lost a podium – and gained some bloodied and bruised elbows – on the run back in the 1953 Grand Prix when his, or, rather, Johnny Claes’ Maserati failed and sent him sideways into a ditch. Yet the road now is wide and long, piercing though banked hillsides, passing endearing homes up towards the circuit entrance at Paul Frere.

And then it’s an abrupt stop where a lonely man paces around waiting to check passes. This year, at least, he’s doing so in brilliant sunshine.