With the 2022 Formula 1 season approaching, the new generation of cars are yet to hit the track but their development has already had an impact on the field of play.

Last year, teams were split between developing their new projects with many opting to focus almost exclusively on the ’22 cars to the detriment of their 2021 season: our data below shows how little they progressed in relation to Haas, the slowest team on the grid, which was focused entirely on this year’s new-generation car.

Even Mercedes and Red Bull, who carried out development well into last season, only made small gains: the champions halted their upgrade schedule at Silverstone and the latter went further still, but both ended the year closer to Haas than they began.

So which team made the most of its package last season? By looking at the cars’ theoretical pace at each round, and how they actually performed, we can build up a picture, across the grid, of why last year unfolded as it did, who gained the most, and which teams underperformed. 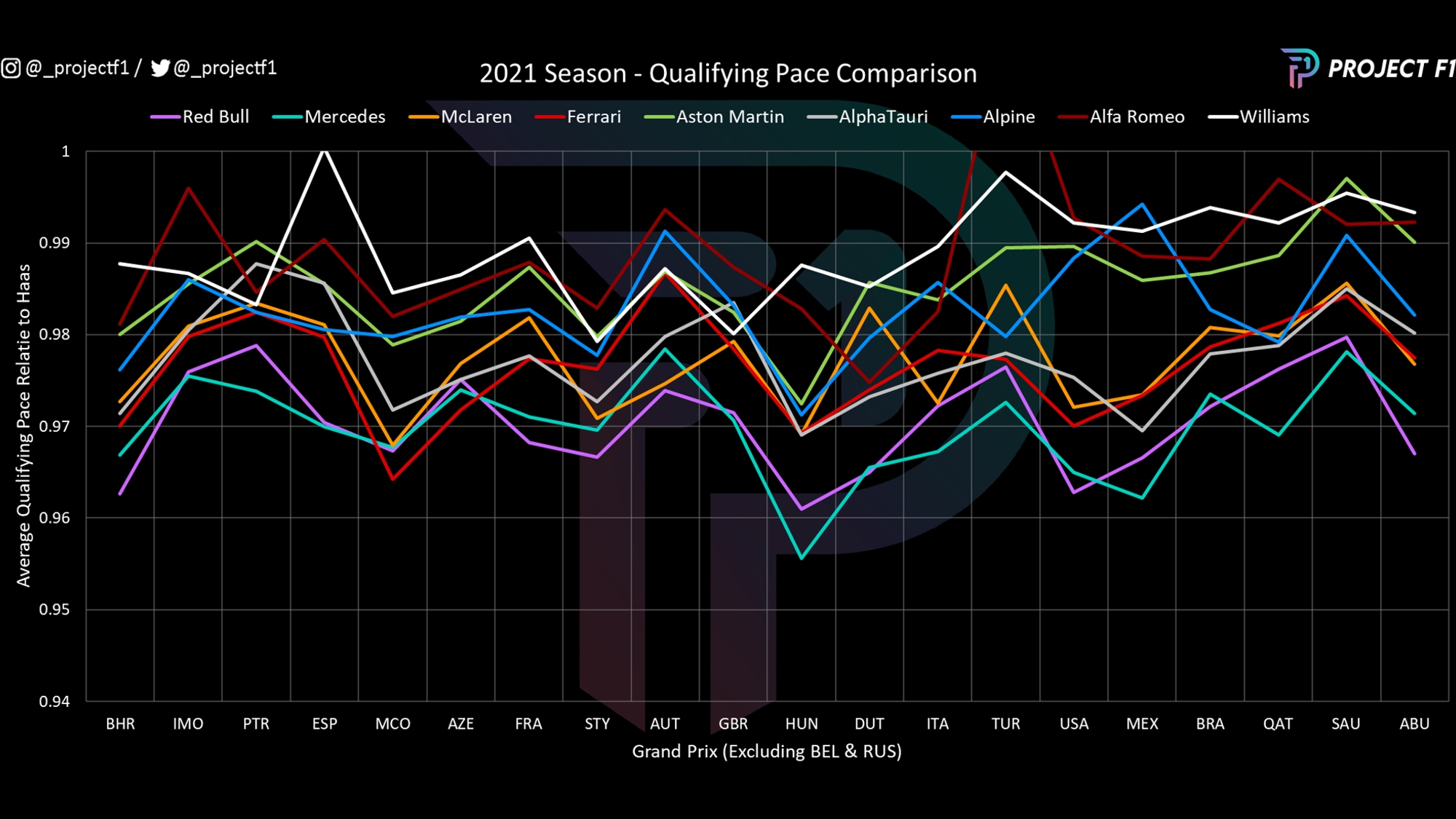 The above chart is a measurement of qualifying pace relative to Haas. The lower the reference point, the quicker the time relative to the American team.

Haas is used as the measuring stick as it was consistently the slowest team in 2021 and brought little to no development throughout the year, allowing for a fairly consistent reference.

The qualifying pace comparison chart, takes the sector times set by both drivers in each team and compiles the best sectors into one theoretical fastest lap.

This gives a benchmark time for each team, which can be compared with rivals, allowing us to identify which driver/team combination got more out of the qualifying lap relative to one another.

As seen below, any divergence between the qualifying chart and best sector times is usually down to mistakes over the course of a flying lap. 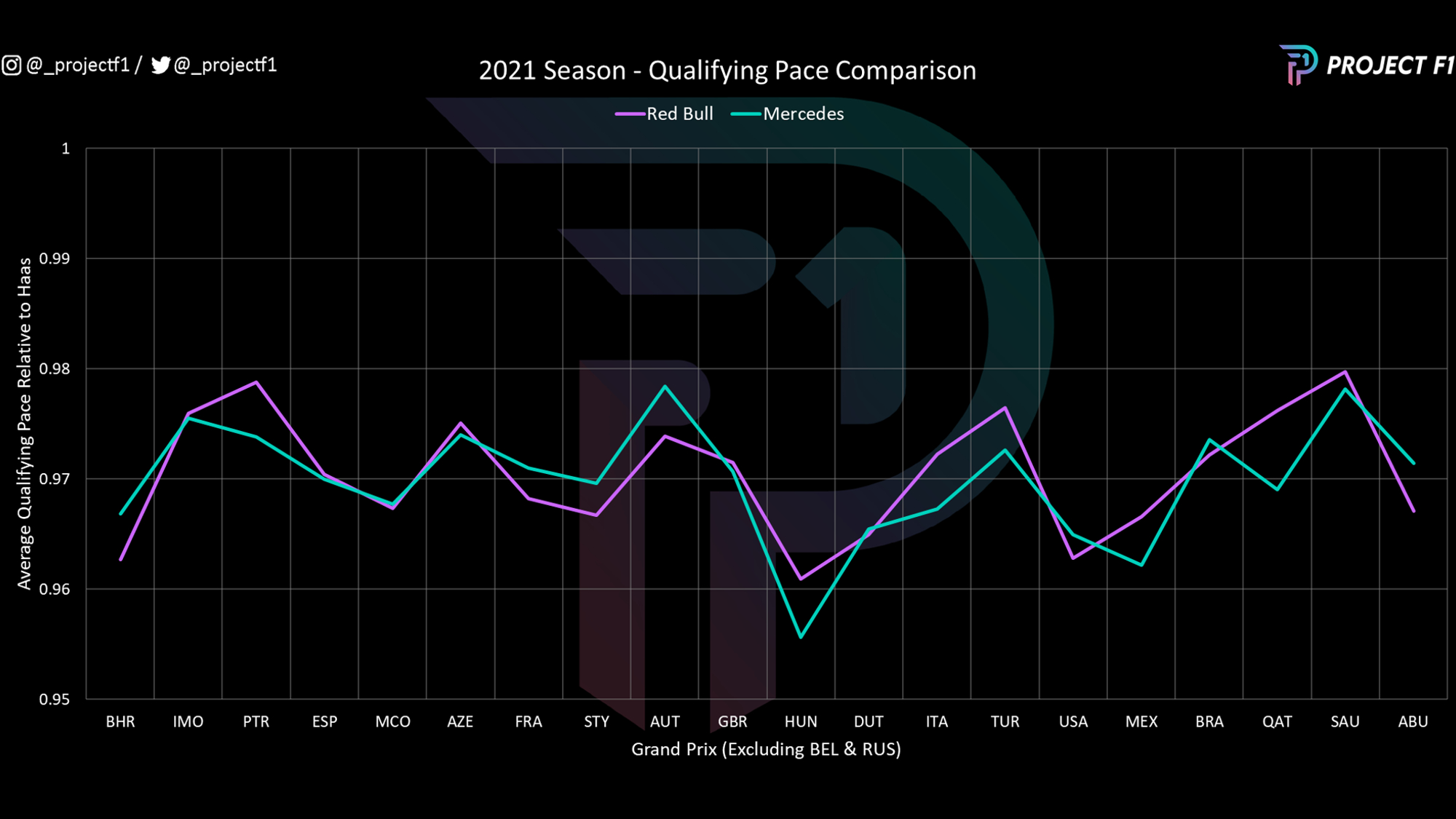 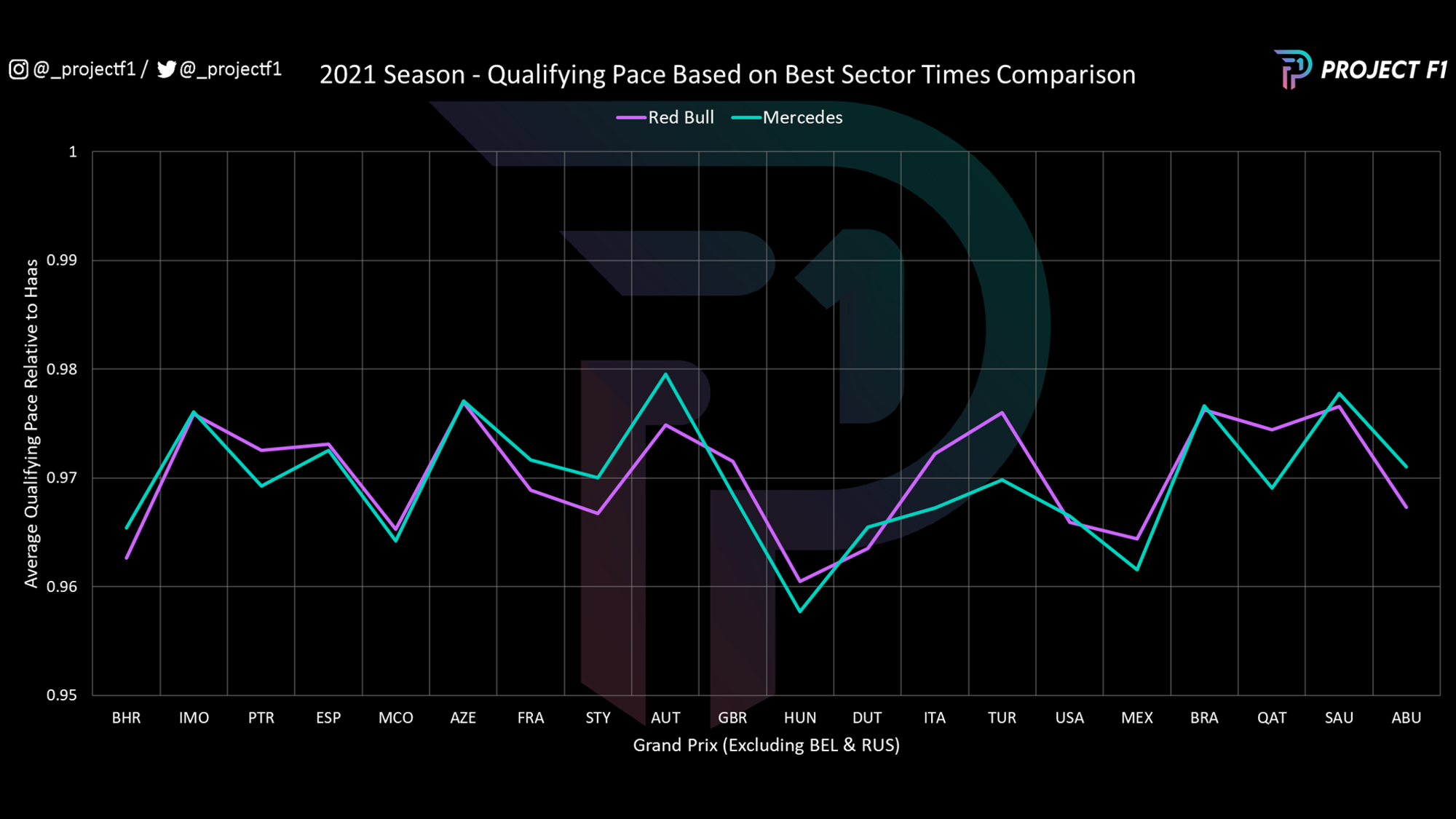 While Red Bull placed greater emphasis on its single-lap pace throughout the 2021 season, especially in the final races, the data shows Mercedes had the measure of its rivals in the latter stages.

In Portugal, Mercedes was much closer to extracting the maximum from its car than Red Bull, but putting this anomaly aside, the two rival outfits were very evenly matched from the start of the season up to Azerbaijan, after which Red Bull gains an advantage.

However, after the British GP, the race weekend which Mercedes brought its final updates to the car with a substantial floor and bargeboard upgrade, the 2021 constructors’ champion was more consistently ahead despite the finer margins.

Those upgrades at Silverstone paired with the mistakes from Red Bull in qualifying showed Mercedes had the better year on Saturdays while the race pace shown by both teams was more closely contested. 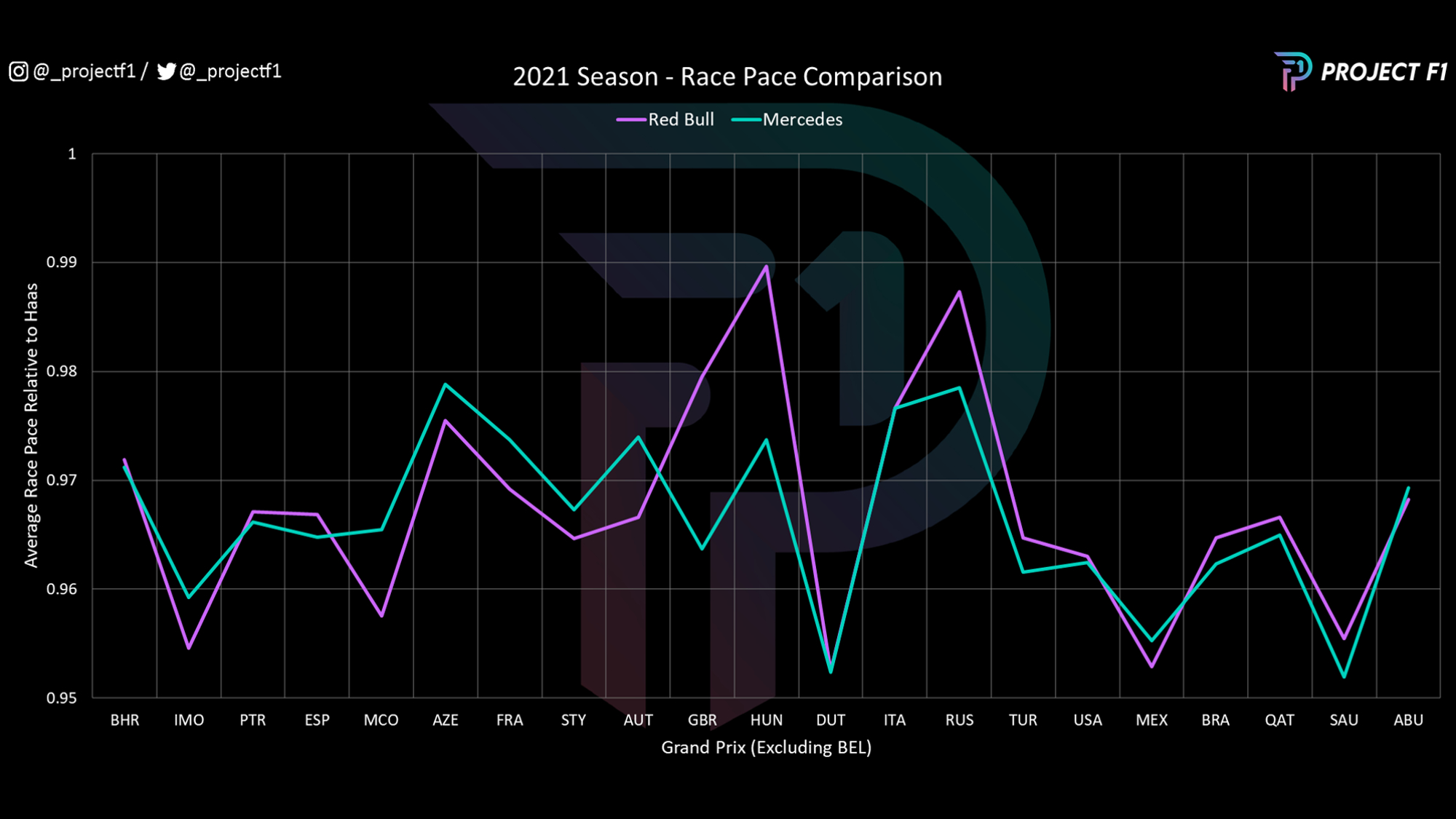 Once again using Haas’s pace as a baseline, the fight for the constructors’ title was narrow with neither team stealing a great advantage over the other.

In this comparison, the race pace of both teams is closer throughout the entirety of the season, with only a few outliers showing up.

The British GP is reliant on Sergio Perez’s time after Max Verstappen and Lewis Hamilton came to blows at Copse on the opening lap. The Hungarian GP is also an outlier after Verstappen sustained sizeable bargeboard damage following the first lap fracas into Turn 1.

Discount those crash-affected races, though, and there’s no wonder we enjoyed such a closely-fought season between the two teams: they could hardly be separated.

Best of the rest battle 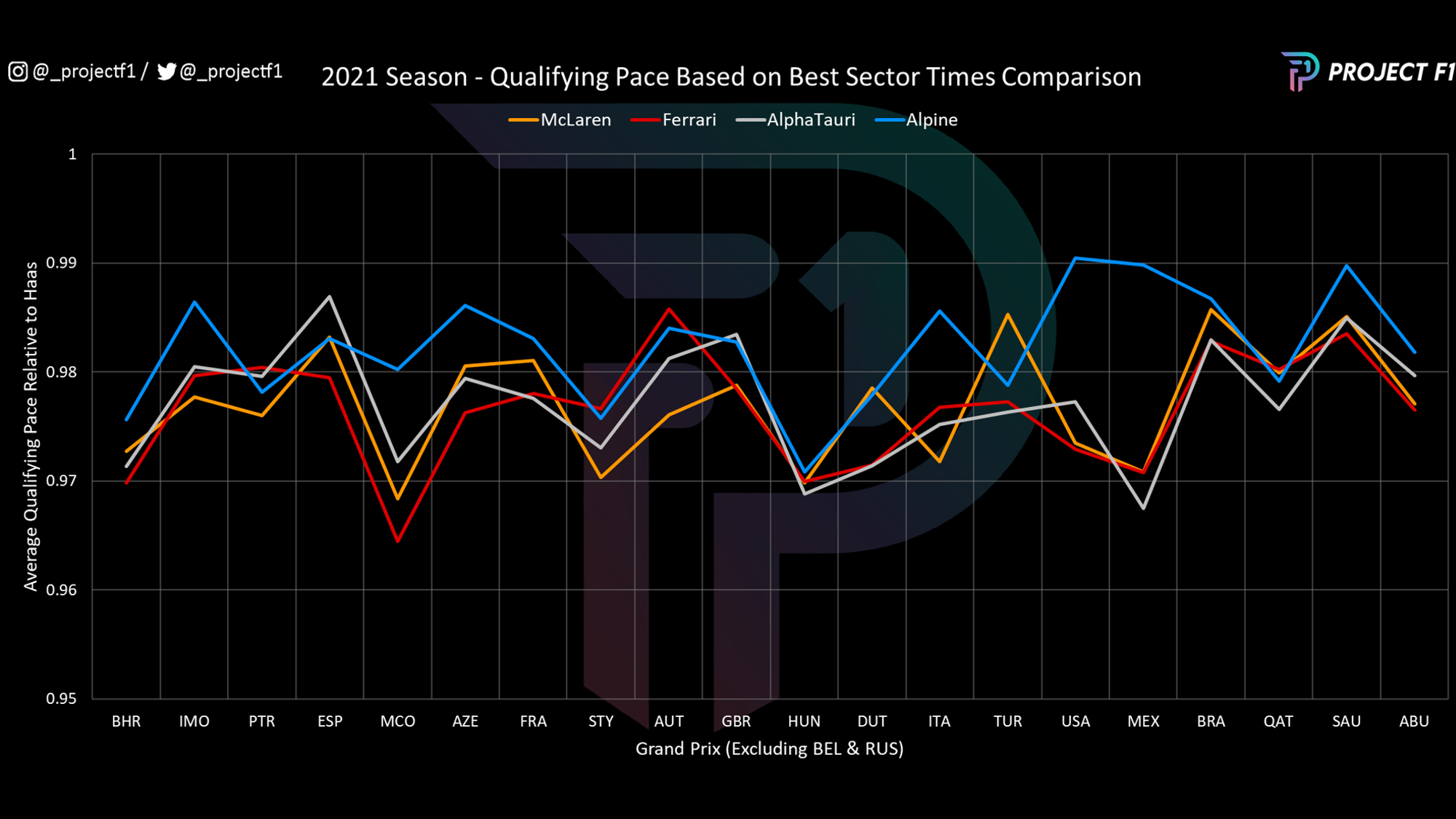 The fight for third in the championship was predominantly fought between McLaren and Ferrari with the latter eventually winning out. Outright pace from the Prancing Horse helped that P3 effort to great effect.

In the qualifying battle based on best sector times of the interested parties, Ferrari was head of the pack eight times throughout the year, meaning errors elsewhere opened the door as it ended up ahead of the other three teams in 11 of the 22 rounds overall.

Its charge to third in the standings really took off with its engine upgrades that both drivers had from the Turkish GP onwards. It was head of the midfield pack three times in the final six rounds on Saturday and its best gains were on Sundays with better race pace than its one-lap speed. 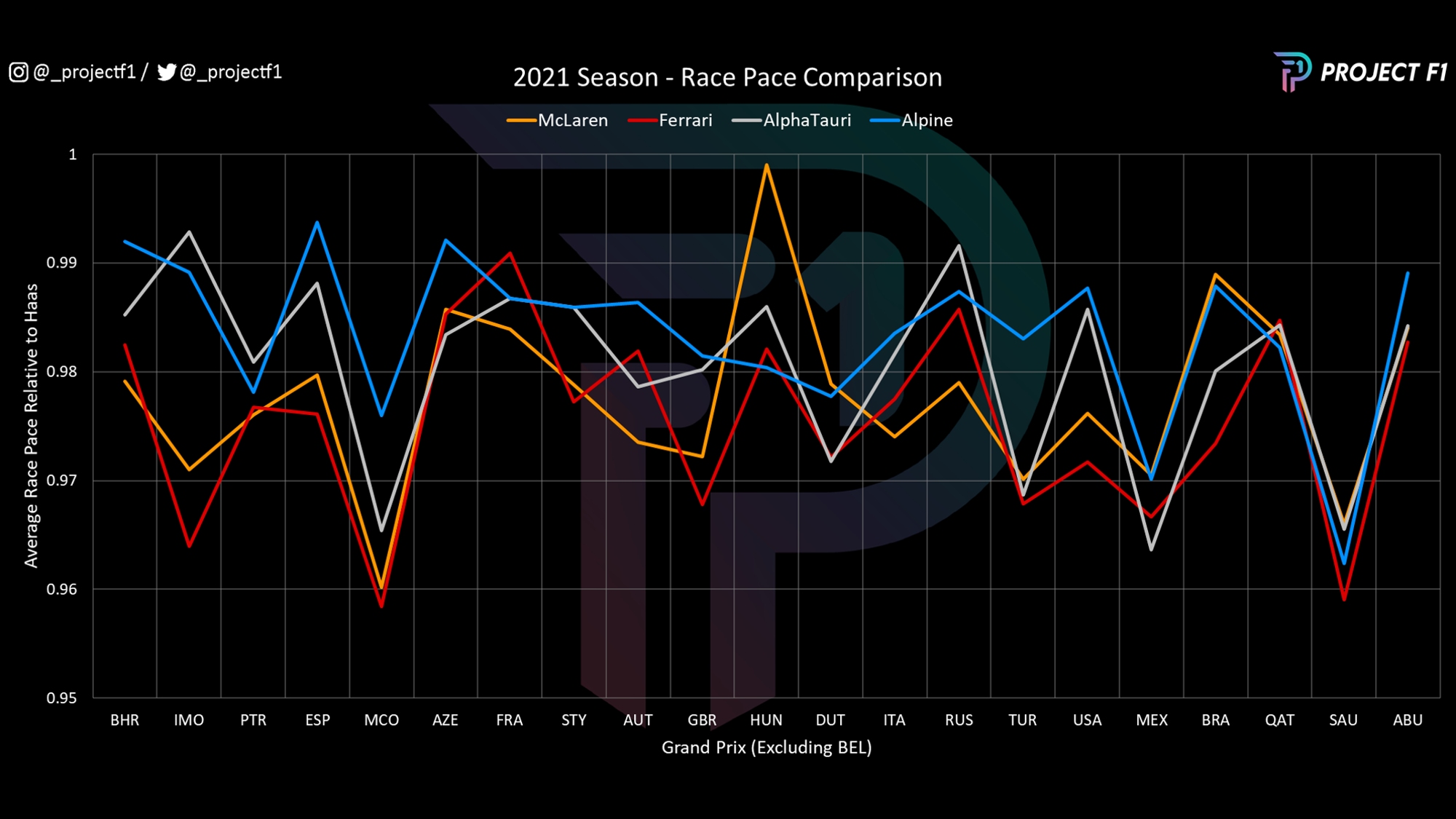 The midfield scrap was a two-team affair but Alpine made decent gains in the latter stages of the 2021 season. From Qatar onwards, the French team’s race pace was comparable with Ferrari’s, which can be seen in the slight downward trend in the graph above.

AlphaTauri on the other hand was a Saturday specialist outfit. The team was a better match for Ferrari and McLaren throughout the season’s qualifying sessions but that was hardly ever matched on Sundays, even though its pace did improve marginally during the year.

Pierre Gasly was a star performer in qualifying sessions, ending up best of the rest behind the Red Bull and Mercedes drivers five times in 2021. Unfortunately for the Frenchman he couldn’t replicate that form on Sundays as the team’s speed fell away and proved much more volatile than in qualifying.

It is arguable then that AlphaTauri underperformed in 2021 with the car it had at its disposal. Yet, as seen further down the page, its results were affected by a lack of reliability, in addition to race pace. The team suffered five retirements in ’21 compared to McLaren’s two and Ferrari’s single DNF (not including the DNS for Leclerc at Monaco or Tsunoda at Monza).

Though Mercedes won the constructors’ championship for an incredible eighth-consecutive season, the team spent more time in second than it did heading up the field.

The above chart looks at which position each team spent the most time in over the course of the 2021 season. Shown as a heatmap, the average position that a team has spent the most time in are bright red while the least-occupied positions are dark blue. Also listed at the bottom are the percentage of laps missed due to retirement, damage or being lapped.

With that level of dominance, the team might feel that it should have taken the constructors’ title. it failed to do so because that dominance wasn’t shared across the team, with Max Verstappen leading more laps than the rest of the field combined in 2021, and Sergio Perez only featuring at the front on a handful of occasions — including the crucial last lap in Azerbaijan.

Also clear is where AlphaTauri fell down. Its drivers spent more than one in five laps of 2021 running P4-P6, but they were also stuck at the side of the track or in the pits for 15% of the laps — the worst performance in the midfield by some margin.

The potential was there, as the Faenza team was usually one of the more competitive packages on a Saturday, especially in the hands of Gasly. Its inconsistent race day performance is arguably why it ended up with a sixth-place finish in the constructors’ championship.

Likewise, McLaren grabbed headlines on a much more regular basis than rivals Ferrari throughout the season.

Lando Norris was always attracting attention with some superb qualifying and race performances and Daniel Ricciardo was one of the four drivers outside of the title contenders to win a race in 2021, yet Ferrari finished ahead of the British team in the constructors’ standings quite comfortably in the end.

The levels of consistency displayed by Charles Leclerc and Carlos Sainz earned Ferrari regular points-paying finishes. It highlights the importance of having a strong, reliable combination of drivers, recording points finishes race in, race out, rather than irregular star performances.

Alpine ended up behind both in the championship standings but the races where it ran high in the top 10 ended up being crucial to its season. They earned the French team the points that it needed to finish above AlphaTauri.

Williams benefitted from the few occasions where its cars were towards the front, with those laps coming when it really mattered: at the chequered flag. It earned the team 23 points, 10 ahead of Alfa Romeo, even though the Swiss-based team usually ran ahead of the Williams pair.

In fact, 65% of Alfa Romeo’s laps were completed in 14th position or above. Williams’ drivers spent 65% of their season in 14th place or below, so the team’s points haul offers a strong case to say that Williams extracted more of its car’s potential than any other team on the grid.

George Russell captured the headlines at Spa with an incredible qualifying lap that ultimately earned the team P2 in the ‘race’, but the procession behind the safety car was so short that it doesn’t even register in the chart above. His laps during the Russian GP in P3, as well as Nicholas Latifi’s run to seventh in Hungary, are among the results that give Williams a sprinkling of appearances running in the top 10.