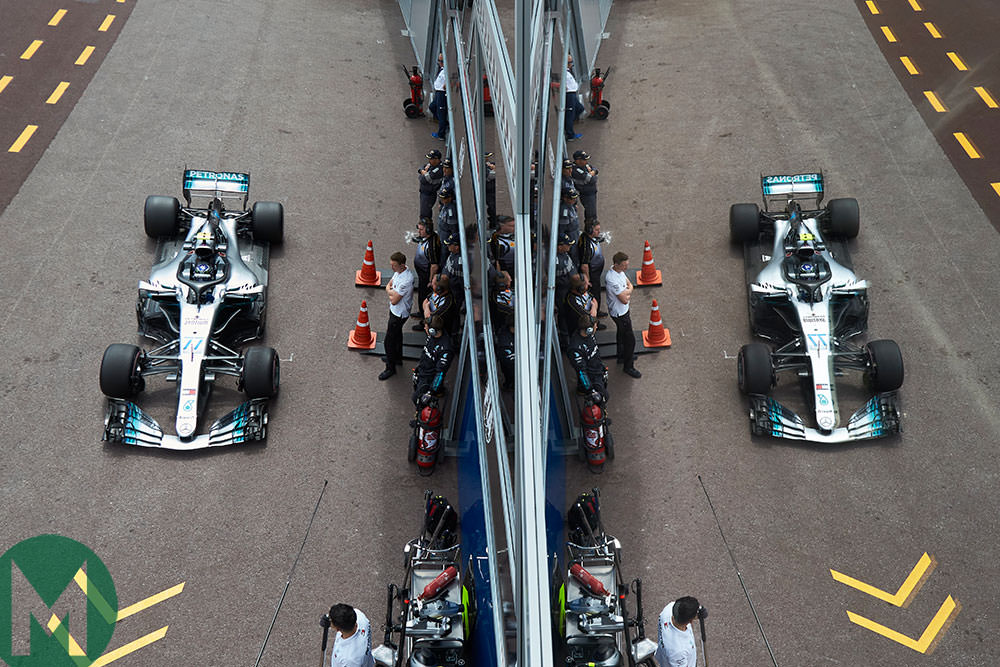 After Esteban Ocon complained of traffic on his best lap during Thursday practice at Monaco, his race engineer Bradley Joyce replied: “That was the biggest space anyone had around them at the beginning of the lap. Sorry, that’s the best I can do.” Which just summarised the age-old Monaco problem, with a queue often building before Rascasse as drivers back off in an attempt at letting the car ahead pull away before beginning the lap – and that queue then concertina-ing back.

It meant that there was little point analysing the race run simulation averages as no-one got an uninterrupted sequence of laps. For the record, the best average was that of Sebastian Vettel’s Ferrari but he did far fewer of them than Max Verstappen’s Red Bull. On raw one-lap pace we saw a clear Red Bull advantage – of around 0.3sec over a closely-matched Ferrari and Mercedes. Normally that 0.3sec would equate to the extra that Ferrari and Mercedes would find from their Q3 modes, though it’s likely to be a little less than that around such a short lap. Either way, it promises an incredibly close fight for pole.

But the very fact that the Red Bull had already justified the feeling that Monaco could be the perfect venue just underlines once again that the competitive pattern of this season – maybe even more than last – is about car traits and track layouts. The top three cars are quite different from each other in their strengths and weaknesses, as an inherent part of their concepts, and this is by far the dominant factor driving the form book. It’s not really about the development rates, or the effect of rulings – the factors traditionally looked at to explain the competitive pattern of a season – but about how each car’s particular strengths and weaknesses dovetail with the demands of a particular track. It was significant that, after dominating the Spanish Grand Prix, Mercedes came here two weeks later convinced it would have only the third quickest car – something that looks true, so far.

Much has been made of the recent controversies surrounding Ferrari – winglets on the mirrors, more oil burn and more ers speculation – and what impact they would have.

The thinner-gauge Pirelli in Spain was assumed to be the reason why Ferrari lost its form, because the two events happened simultaneously. But it was nothing of the sort – as the later test on the original thicker gauge confirmed. It was just that Barcelona was the first track of the season featuring mainly long duration high speed bends ­– and this revealed a particular weakness of the car that isn’t relevant at tracks featuring shorter-duration corners.

It may also be significant that Ferrari changed the position of its rear upper wishbone mounting from Saturday onwards ­– a development item made with the aim of increasing the aero efficiency but which perhaps pulled it into a tyre issue.

Then there was the ers controversy, with some observers expecting to see Ferrari’s competitiveness dulled by the FIA’s more stringent insistence at the way Ferrari’s unique twin battery system is operated. Expect to see nothing of the sort. Any difference in subsequent performances originating from these rulings will be dwarfed by the inherent differences in the cars.

Mercedes’ low-rake concept is aero efficient but runs out of rear downforce earlier than the Ferrari but this year’s SF71H is much more aero-efficient than last year’s SF70H. The Red Bull has the best low-speed speed mechanical grip of all, and a very benign aero platform, but a power shortfall. The Ferrari has a potent combination of Mercedes-like power and something probably closer to the Red Bull in aero performance than is the Mercedes.

The chances of Mercedes suddenly finding that big chunk of downforce at all speeds or of Ferrari suddenly having Merc-matching aero efficiency are negligible. Only if Renault Sport’s Montreal engine upgrade really does get it on par with Mercedes power (as Renault Sport believes) will the Red Bull’s inherent form change. If so, it could be the dominant car on all tracks but no-one at Red Bull is holding their breath waiting for that Viry claim to come true.

The message is, the technicalities are overpowering the conspiracies as explanations for any form variation we are seeing.