No Formula 1 team has ever had a perfect season.

In 70 years of the world championship, great racing drivers have come and gone and brilliantly-engineered cars have dominated. But never have they combined to form perfection. An unblemished season of wins from start to finish.

McLaren has come closest so far in its legendary 1988 season, where 15 race victories from a possible 16 were shared by Ayrton Senna and Alain Prost in the phenomenal MP4/4.

But the first three races of this year’s Formula 1 season suggest that this 32-year record could be broken within months.

Mercedes’ W11 is currently peerless in the sport; the engineers and designers at Brackley and Brixworth have managed to build a car that has rivals running for the hills already.

Lewis Hamilton, who himself continues to close in on the all-time win and title records that were thought unreachable, called this year’s car the best the team has ever come up with. And the previous efforts have won the last six world titles.

It was the manner in which Mercedes won at the Hungaroring that brings this previously unthinkable record into view. Such was Hamilton’s pace out front, he was able to build a gap to second-placed Max Verstappen, make an unnecessary and risky pit stop and maintain his lead to secure an extra point for the fastest lap — a benchmark he set twice before the end.

Both Ferraris were lapped as Hamilton cruised to his 86th career victory and eighth win at the Hungaroring last Sunday. One day earlier, the Merc pair stunned the paddock to lock out the front row of the grid by one second. There was a greater gap from the first to second row than there was between the remainder of the top ten.

This was all on a circuit that was supposed to suit Red Bull, a team that has prided itself on aerodynamic performance and innovative chassis design under the brainpower of Adrian Newey and co. in Milton Keynes. It’s struggling with its unpredictable RB16 this year, though.

With a stumbling opposition, three wins from three on the books and with a number of power circuits coming up such as Silverstone, Spa and Monza, it’s difficult to pick out a race where the well-oiled winning machine is likely to fall apart.

A visit to Mugello and potentially one to Portimão could present rivals with a chance at seizing the moment without previous form to go on as teams venture into a relative unknown, but you would not bet against Mercedes’ pace being too much to overcome at either venue.

Hamilton himself seems to be in the form of his career as well, a man that refuses to believe he is beaten on any Sunday. Up until the late safety cars in Austria, he had been closing the gap to race leader Valtteri Bottas at a rapid rate, forcing both to push the limits of reliability.

The Finn’s car was the one in critical danger of retirement, likely exacerbated by his aggressive use of kerbs at the Red Bull Ring as he tried to keep a charging Hamilton behind him.

Right now, reliability or damage may be the main obstacles preventing a Mercedes clean sweep, as they did for McLaren in 1988.

Up until round 12 of that year, it had looked as though McLaren would be the first to do it. Prost had even spoken prior to the race about the possibility of a perfect season and after a front-row lock-out in qualifying, it was business as usual at Monza.

Engine issues for the Frenchman mid-race though and Senna’s contact with the lapped Jean-Louis Schlesser — a replacement for an ill Nigel Mansell — spelled the end of the team’s immaculate record that year.

Since Mercedes’ scare at the Austrian Grand Prix, it has reportedly addressed those concerns linked with sensors on the gearbox, and won’t encounter as punishing a circuit again this year. 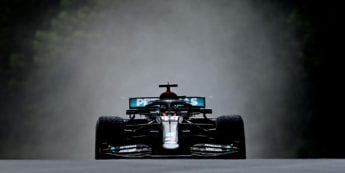 There were all sorts of distracting features to this race, mainly related to the wet track it started on. Max Verstappen’s crash on the formation lap and his mechanics’ heroic…

Mercedes has come close to the feat already. In 2016, it took 19 of the 21 races and lost just the Spanish and Malaysian Grands Prix due to an intra-team collision and reliability respectively.

The Silver Arrows seem to be on top of reliability and there is less chance of squabbling between the harmonious pairing of Hamilton and Bottas, than there was there was between Hamilton and Rosberg. Bottas has also proved capable of picking up the pieces when the former experiences the rare off-day.

As Ferrari suffers from the fallout from engine technical directives and Red Bull continues to misunderstand its 2020 car, there has been no better chance for Mercedes to prove itself to be the ultimate Formula 1 team.