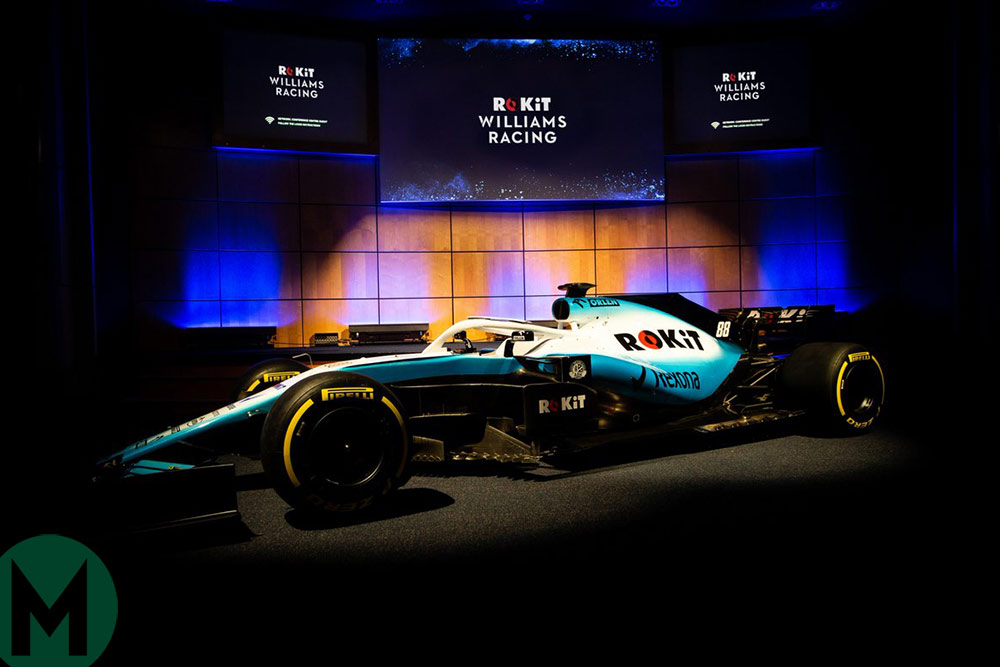 Williams has revealed its new livery to be raced in Formula 1 this year, based on new title sponsorship from ROK Global.

Williams called this afternoon’s event at the team’s Grove factory a “title partnership and livery launch,” reflecting that its five-year deal with previous title sponsor Martini had come to an end and new sponsors were stepping in.

‘ROKiT is a new telco brand challenging the status quo, offering premium smartphone technology, performance and design at an affordable price and installing innovative Wi-Fi networks to make the world a better place,’ read a statement from Williams, issued on Monday.

‘ROKiT is working internationally to develop smart cities and is currently rolling out public Wi-Fi across 27 of India’s largest cities, with a vision to create smart cities in 10 other countries in the next 3 years. ROKiT’s innovative mesh Wi-Fi network provides communities with better, faster and more cost-effective connections,’

The company was founded by Patrón Tequila co-founder John Paul DeJoria and Jonathan Kendrick, who worked as an engineer with Goodyear in the 1970s, briefly also working for Williams.

Williams deputy team principal Claire Williams said: “We are delighted to welcome ROKiT to our team as our title partner for the 2019 season and beyond.

“We share many similar values and aspirations with ROKiT; primarily putting engineering and innovation at the core of everything we do in our pursuit to be the best – the perfect platform from which to start a partnership.

“ROKiT is on an exciting journey in their world of telecommunications, as we are at Williams as we build the team for a successful future. Taking that path together will make us both stronger in our endeavours and so I can’t wait to get started.”

Williams also is one of several F1 teams with an all-new driver line-up for this year, with Kubica returning to an F1 race role for the first time since his major rally accident in early 2011, which left him with severe arm injuries.

He was Williams’ development and reserve driver last season and drove the car three grand prix practice sessions. Kubica is joined in this year’s race line-up by reigning Formula 2 champion George Russell, who is making his F1 race debut.

Williams is hoping to bounce back after a disastrous 2018, wherein it dropped to finish last of the 10 constructors in the standings having finished fifth the season before. Its points total also dropped from 83 in 2017 to just seven last year.

Today’s unveiling was of the 2019 livery only, with Williams’ 2019 car to take to the track in preseason testing, which starts in Barcelona next Monday.