Following the latest high-profile departure, how far from success is Williams? And so too McLaren? 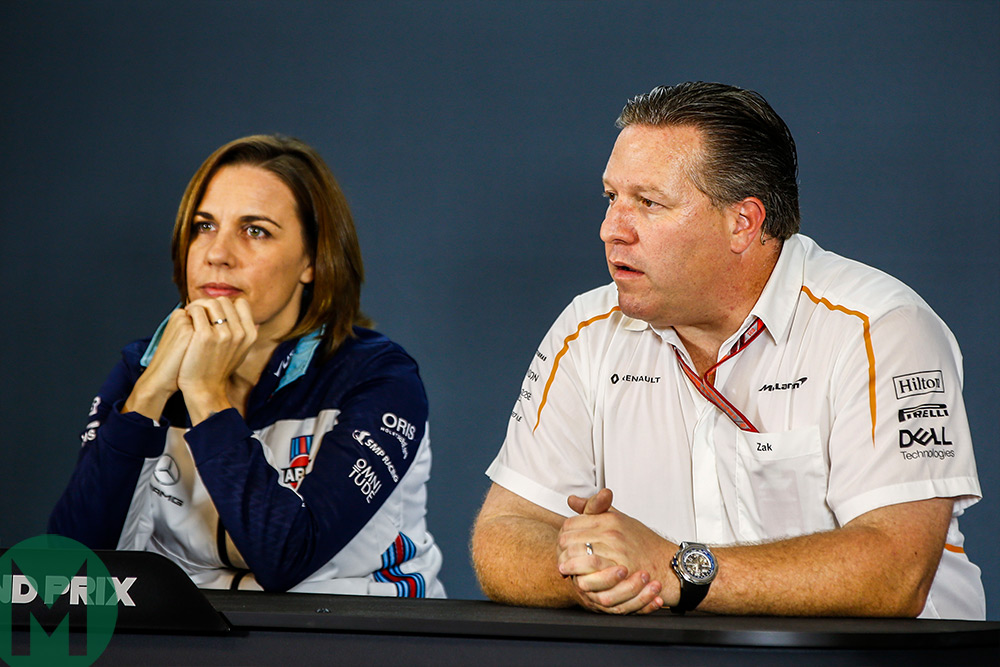 Rob Smedley’s departure from Williams at the end of the season adds to the team’s 2018 exodus. If Williams has a rival in how many high-profile names have departed during the season, it’s McLaren. The two proudest British teams are now seemingly locked solidly at the back of the grid as the likes of Sauber and Toro Rosso have developed their way clear of them.

Different times, different people, different dynamics. But what are the realistic 2019 goals of these two former giants?

In reality, Williams hasn’t been a truly top team since around 2003, at the height of its partnership with BMW. But the hybrid era and its choice of the dominant Mercedes as a power unit supplier into 2014/15 helped bring it back to a level of competitive respectability. This was gradually eroded as Ferrari came to produce an equally competitive motor – putting Maranello well clear of Grove and helping the Ferrari customers claw back ground.

Then there’s been the remarkable performance of that other Mercedes customer, Force India, which over the years of the hybrid formula has come from behind and season-by-season drawn level with, then pulled away from, Williams.

McLaren was last a top team around 2012. But it believed itself to still be one until this year when the truth was starkly revealed by engine parity with Red Bull.

Sure, the Honda engine had been uncompetitive, but McLaren, in hindsight, had been hiding behind this to shield it from the unpalatable truth.

Mixing it with Mercedes next year is not, at present, a realistic prospect for either team. But if we define competitive respectability as invariably making it through to Q3 and competing hard to be best of the rest after the ‘big three’, there is nothing in the fundamental circumstances of either team to prevent them bouncing back to respectability next year, only in attitudes and approaches.

The actual physical limitations of the cars of both teams this year originate in the internal processes and attitudes. At Williams, the analysis of the data produced by the simulation was crucially weak in a way that had not been broadly recognised up until then. It was this that led to a serious under-estimation of the cooling demands and how they would best be resolved around the barge board area, a massively aerodynamically sensitive area of this wide floor generation of cars.

The analysis weakness was revealed as the team tried for a clean-break model unrelated to the previous lineage. Time had passed this element of the team by. Williams has a loyal and stable staff but there lingers a suspicion that this has led to a lack of new ideas coming in from the outside and a certain resistance to change.

Related: MPH: Russell is a glimmer of hope for Williams

At McLaren, the proud history and recent difficulties with engines perhaps allowed many of those there to retain the belief that they were still operating at the cutting edge. But time had passed them by too – the investment and unrelenting push of Mercedes, Red Bull and Ferrari as they competed hard to prevail over one another progressed technology and processes at an amazing pace.

McLaren’s MCL33 was revealed as a car capable of respectable cornering speed only as a function of a completely unacceptable (by 2018 terms) level of drag. The team’s estimation of what was a competitive lift:drag number was wildly out of date.

When Lewis Hamilton asked Ross Brawn in 2012 how Mercedes was possibly going to compete with McLaren when it had only half of the latter’s staff numbers, the answer was a massive investment and recruitment drive. Mercedes bulldozed its way to the front with huge investment and total commitment. Ferrari and Red Bull recognised the stakes had changed and responded.

Furthermore, these recruitment drives sucked a lot of very good people at all levels from teams such as McLaren.

This year was the first time this reality was revealed so starkly to Williams and McLaren. The first part of solving a problem is to recognise it. Given that they are each looking at a necessary cultural change, the challenge becomes one of leadership. The passing of the generations has shown what a tough act to follow Frank Williams and Ron Dennis were in this regard. How well this had been understood and how the relevant people are equipped to provide that inspirational leadership will determine the fortunes of these two glorious racing entities.