Red Bull team boss Christian Horner insinuated the incident amounted to a “professional foul” in the immediate aftermath and made several references to the 51G-impact the Red Bull car sustained during the crash.

Social media was ablaze following the Silverstone crash with debate and abuse. Hamilton was on the receiving end of racial abuse during and after the race, which F1, Mercedes and Red Bull all condemned.

Ahead of this weekend’s Hungarian Grand Prix, Wolff says that rivals Red Bull had not acted in a suitable manner following the crash, citing that emotion may have gotten the better of Mercedes’ title rivals.

“I think we wanted to bring a little bit of respect back to the discussion. We understand that emotions can run high and that is always a matter of perspective and perception. But we felt that that line was overstepped,” Wolff said.

“We felt that the comments that were made during and after the race and then in written statements, and in the meeting itself, were below the belt.” 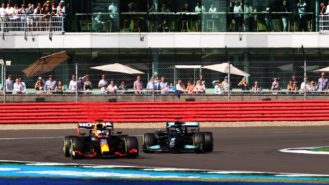 Speaking prior to the press conference, Wolff explained that the comments made by Horner and Red Bull immediately following the race were likely out of emotion but were damaging beyond the interests of a greater penalty for Hamilton.

“The comments that were made, surely out of emotion, were going directly against a seven-time world champion,” he told Sky Sports F1.

“Words like ‘amatuerish’ should have no place and what it triggered was an avalanche on social media and a lot of controversy added to further polerisation and as a sport we should do the contrary, we should de-escelate.”

Wolff also would not reveal the contents of the FIA document that the race stewards released on Thursday that insinuated Red Bull had made further disparaging claims against Hamilton and Mercedes.

While Red Bull’s right to review of the Silverstone crash and 10-sec punishment for the Mercedes driver was rejected. Stewards noted that the claims were concerning but Wolff would not elaborate further on what specifically was stated. He also added that F1 has a job to prevent social media backlash for similar incidents in the future.

“The remarks that were made during the Silverstone Grand Prix were just elaborated further in the document,” he said.

“I can’t comment on these things because I wasn’t in the meeting. Things were said and written were very emotional but it’s not for me to comment.

“I don’t want to ignite a fire even more. What we need to do as a sport is de-escelate things to stop more polarisation on social media.

“I think Formula 1 needs content and controversy. As long as it is around the sport, it can be quite entertaining. But there are certain boundaries that we need to respect and the sport should unite and not create more polarisation.”