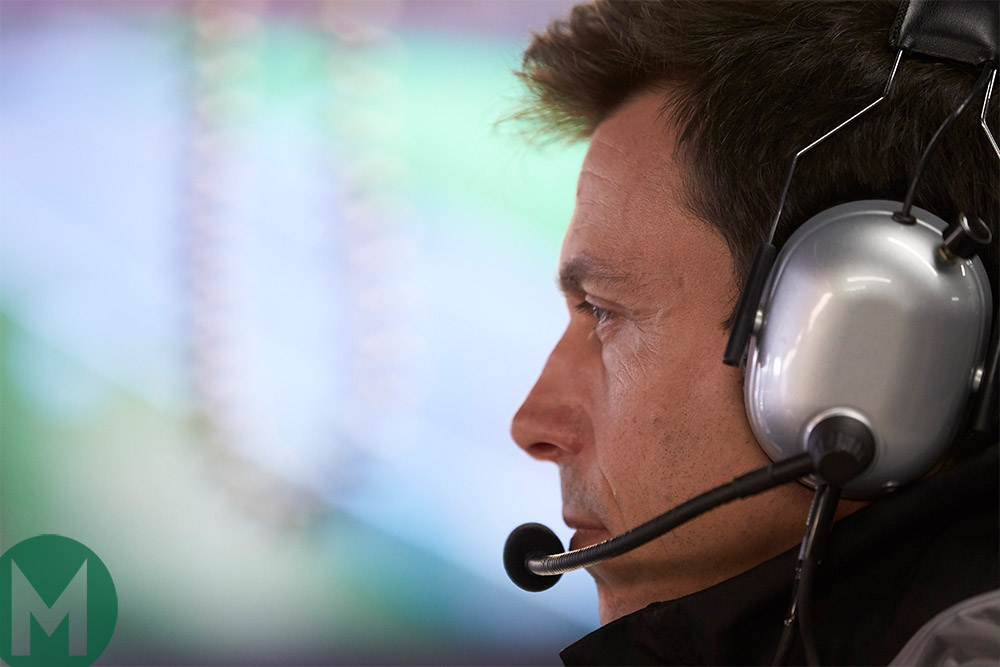 On the surface, it looked much easier managing Lewis Hamilton and Valtteri Bottas last year than ever it did Lewis and Nico Rosberg. Discuss…

“Yeah, it was! Lewis and Nico went back a long way and, throughout their years at Mercedes, what started out as a healthy rivalry in 2013 sometimes became controversial, which could make things difficult within the team – not in a sense that it was difficult to manage, but it created an awkward dynamic – things were so fierce that a spirit of controversy developed and that is never a good thing internally.”

Did Lewis and Valtteri Bottas hit it off straight away, and how do you expect their relationship to evolve?

“You never think a relationship between team-mates will always be harmonious, but in year one there was definitely something of a honeymoon period – and it helped that there was lots of respect between the two of them. There was no previous baggage, either, unlike Lewis and Nico. The fact it was such a late call for Valtteri made things much easier in a sense, because he was a new guy who had to adapt to the team and his new environment, while Lewis had already been there for five years. I’m not expecting it always to be easy, because that simply isn’t part of any racing driver’s DNA, but it was in 2017.”

We sometimes see screen images of you thumping the pit counter, perhaps when Sebastian Vettel has jumped ahead of one of your cars during a tyre stop. It’s clear that you remain very passionate, but how do you retain competitive motivation after four straight world championship doubles?

“I think you remain energised so long as you remain passionate about what you do. This is a fundamental, essential mindset. If one day I were to lose my passion for F1, or developing the team, then perhaps I’d question whether I was in the right position. But I really enjoy being part of the team, the changing environment, the fluctuating regulations, new competitors coming in, upping your game… Every year is different.”

Are there any secrets to keeping the whole team motivated?

“We’re quite a large organisation and we place a lot of emphasis on what motivates us, what energises us. What kind of objectives should we set ourselves? It starts with the individual, then the department, then the overall company. As long as these are aligned, you can reinvent yourself every year, reset your objectives and enter every season with the right motivation.”

And what are the objectives for 2018?

“We want to maintain the momentum we built in 2017, when we had a completely new set of regulations. We want to stabilise the things that functioned well last year, then work on any weak areas in the car and the organisation to make them better. F1 is so competitive that you cannot take it for granted that you’ll always be fighting for championships.”

As a triple world champion Lewis was already an all-time great, but his fourth title has elevated him to a yet higher plane. How do you assess his status in the sport’s pantheon?

“Clearly the statistics show that he’s among the greatest Formula 1 drivers of all time – that’s a fact. In terms of records he has beaten some and might yet beat others, but it’s not easy. It’s best to recognise the greats once they’ve called it a day, that’s the moment to sum it all up. He’s already part of a group of the very best F1 drivers, but he can achieve even more.”

What do you see as Lewis’s greatest strengths?

“We all have complex personalities and I would never want to simplify someone’s character in terms of a single strength – that’s not how it works. He has great talent, a good work ethic, intelligent racecraft and empathy. His most impressive character trait is perhaps the way he develops all those skills constantly inside and outside the car.”

How do you think Valtteri handled himself against 2017-spec Lewis and do you think that gives him a good platform on which to build this year?

“I think we perhaps underestimated the effect of the late call – signing in January for the defending world champion team and being asked to go up against probably the best driver on the modern F1 grid. He put in some great performances and some OK performances, but he also struggled on certain tracks. Because he’s very bright, though, he went away for the winter to analyse things and will come back stronger in 2018.”

Mercedes also has a rich seam of talented youngsters – Esteban Ocon, Pascal Wehrlein and GP3 champion George Russell. How do you assess their future prospects?

“It’s a bit early to say. Esteban had a very good first full season with Force India, but we need to see what he can do now that he knows all the tracks and is fully integrated within the team. I think that will be interesting. Drivers in junior categories still need to prove what they can do, but George is on good path and will find things becoming a little bit more competitive against a higher calibre of rival in F2. Let’s see where he finishes up at the end of the year.”

Is it frustrating that there are only 20 F1 seats, so even a team with Mercedes’s influence was unable to find a seat for Pascal to continue his F1 career?

“F1 is very tough. Pascal has put in some really great performances during the past two seasons, scoring the only points for Manor and Sauber, but you lack visibility when you are fighting for the last few positions. It’s a hard world, but he has another chance in the DTM this year and remains our reserve driver, which is an important role. Hopefully an opportunity will arise for him to show his talent again in F1.”

Politically, did you see a great deal of change between F1 in 2016, the last year of Bernie Ecclestone, and F1 in 2017, the first of Liberty?

“There were big differences. Once legacy had ended after being built up over more than 40 years. Bernie reinvented the sport and made it great, but Liberty took over with a completely different management style. I wouldn’t want to judge one against the other: they are just completely different. Liberty is only one year into the job and we’ll see what results they generate from now on.”

If you had to write a school report after Liberty’s first season, what would it say? Shows great promise? Must try harder..?

“Ask me again in 12 months! I’d like to give them more time. They’ve stepped into the big boots of an iconic, old-fashioned entrepreneur and I wouldn’t want to judge them just yet.”

Do you think the sport is heading in the right direction and are there any things that you would like to see adopted?

“I think things are going in the right direction – for instance there is greater transparency between Liberty and the teams and Liberty is taking more of a long-term perspective, which I see as a positive. But there are many decisions that have been taken – under both old and new regimes – that I consider tricky. We have to fight against many other sports on different entertainment platforms and can’t afford to undermine the show. It’s a complex micro-cosmos and you have to make careful judgments about what should or should not be implemented. F1 has gone in the wrong direction on the track – the cars are not spectacular enough and we’ve introduced the halo when we should have found something more aesthetically appealing. I could list 10 other things, but it wouldn’t be fair to do so in public. We have a legacy to carry, we have responsibilities and I feel everybody should be aware of that.”

Do you worry at all about the future? F1 increased its digital activities last year, which wasn’t difficult…

“They were previously zero!”

…but TV viewing figures continue to drop in some traditional heartlands.

“I think there are worrying signs for every sport because of the changing media landscape. Traditional TV is losing importance – people use multiple screens, watching on-demand, and it’s a challenge that has to be tackled in the right way. That is the biggest factor. It’s a fair enough strategy to move TV behind a paywall to generate revenue, but then you have to be able to cope with shrinking audiences, as has happened in many markets.”

What has changed in Germany? There used to be two sold-out Grands Prix every year, at the height of the Schumacher era, but in the past eight seasons there have been four titles for Sebastian Vettel, one for Nico Rosberg and four for Mercedes, yet it’s now a struggle to sustain one GP…

“I think Germany is a special case – there is a bit of a hangover there after so much success. In Austria interest wanes if the same guy is winning all the time. These things are cyclical.”

Who do you regard as the most likely opposition this year: Ferrari and Red Bull, or do you foresee any surprises?

“If you are realistic it will be the usual suspects, but there is a fine line between realism and arrogance – and it would be arrogant to write off all the others. Renault, McLaren, Williams and Force India are candidates to surprise at times. My mindset at the start of the campaign is to take everybody seriously.”