Piero Ferrari has always been something of an enigma to the world beyond the gates of Maranello. The illegitimate son of Enzo is ‘the man in the shadows of a legend’, as Grand Prix editor Mark Hughes describes him in his exclusive interview with the Ferrari vice-president, published in the November issue of Motor Sport. 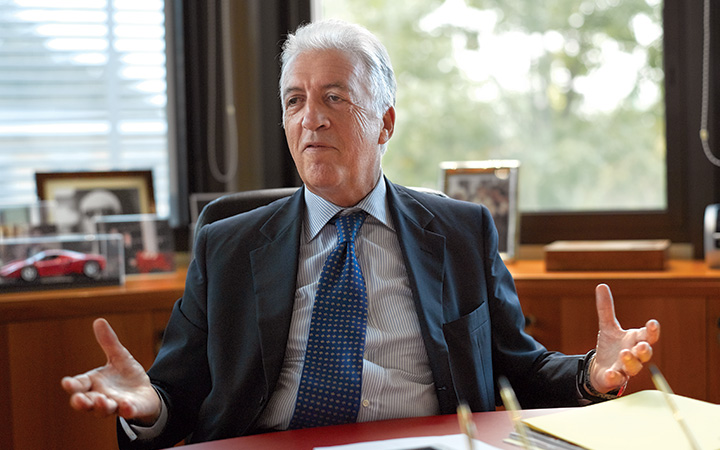 The physical resemblance to his father is clearly striking. It’s all in those eyes, free from the dark glasses that Enzo insisted upon as his shield to the world at large. In contrast, intimidation and mystery forms no part of the son’s character and he has no interest in playing the role of a ‘Don’.

“I never saw myself as repeating what my father had done,” he says in our interview. “That would have been impossible. I did not want to be the king, it’s not in my nature.” 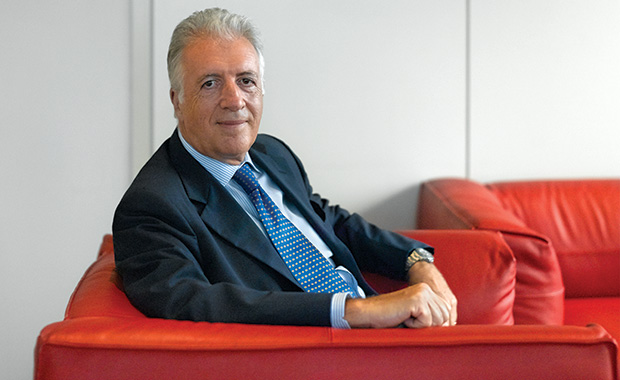 Under the 23-year chairmanship of Luca di Montezemolo, Piero Ferrari often seemed little more than an ambassador for the world’s most famous car manufacturer, a link to the old family, a figurehead and not much more. That might well have been the intended perception nurtured by the president, recently deposed ­– but as Mark explains in the magazine, it’s far from accurate.

Personally, I’ve only met him once when he joined us at the Motor Sport Hall of Fame in 2013 to induct his old friend Niki Lauda into our club of racing heroes. He was polite, modest and had no intention of imposing himself on the night – and yet he was not without charisma. Somehow he had a quiet power, which corresponds directly to the figure Mark met in Maranello ahead of the Italian Grand Prix.

As is billed on the cover, the interview was about the past, present and future of Ferrari. The vice-president was particularly illuminating about Enzo, and the man behind the mask.

“He was a very special father,” he tells Mark. “I saw him behind the screen. The glasses were his screen between the people and himself.” 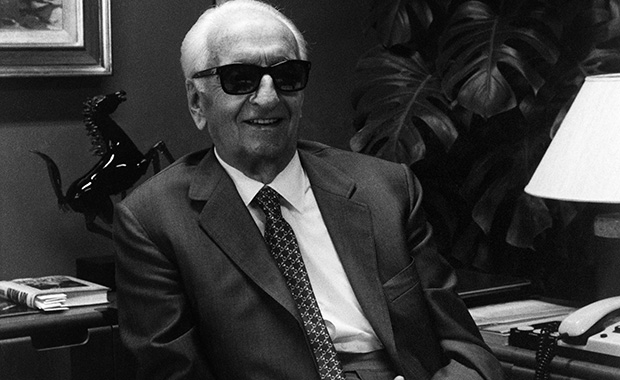 He goes on to talk about his first experiences of the Ferrari business and his friendships with some of the team’s greatest drivers, including Lauda, Jody Scheckter and Gilles Villeneuve. He also discusses how the company evolved under Fiat’s ownership, particularly following his father’s death in 1988.

And you might be surprised to read how influential he has been since that time. Mark describes him as ‘the moderator, the facilitator, the more approachable, warmer side of the dynasty’. There is subtlety in his role as a link to the Fiat hierarchy, and as the man who deserves the credit for vital business deals such as the valuable relationship with the Mubadala group.

There is also steel in his words on the subject of Formula 1. For Piero, like his father, Grand Prix racing has always been and always should be central to the company’s existence.

“We have always been in F1 and I don’t want to be alive the day someone wants to stop Ferrari’s F1 programme,” he says. “Because if you stop and try to come back, forget it. It would take 10 years to be competitive again. I’d really be against it.” 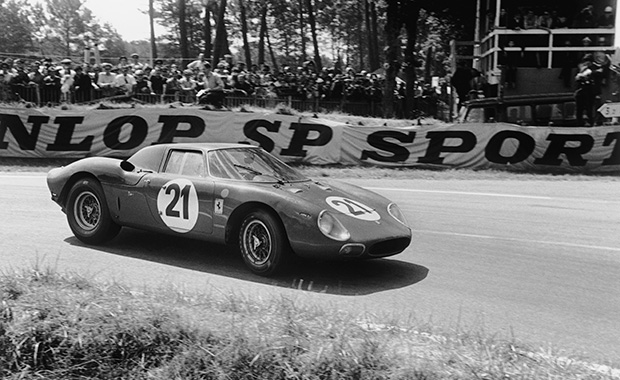 The winning NART 250LM of Masten Gregory and Jochen Rindt at Le Mans, 1965

What about Le Mans? Next year will mark the 50 anniversary of Ferrari’s last win at a race it once ‘owned’. Back then, Piero was taking his first steps as a (privileged) company employee. With the potential crossover of technology between hybrid F1 and sports cars, wouldn’t he want to take the Prancing Horse back for a shot at overall victory?

“As for Le Mans, it’s very interesting and part of Ferrari’s history,” he says. “But I’d say it’s quite impossible to do a full LMP1 and F1 programme – for us. It would be incredibly demanding technologically and financially. You have to do one or the other.”

Does the “for us” in that statement allow a chink of hope that a Fiat-backed Le Mans project could still be possible, under the guise of Alfa Romeo perhaps? Maybe, maybe not. But for Piero Ferrari, Le Mans is clearly history. The future holds other challenges for the company under Sergio Marchionne and Fiat-Chrysler.

But at least with the influence of Piero’s understated guiding hand, there’s still a link to the old Ferrari of the past.

Mark’s interview isn’t the only exclusive in the November issue. We’re also proud to have presented a big career break to a young driver building a reputation for himself in sports car racing. 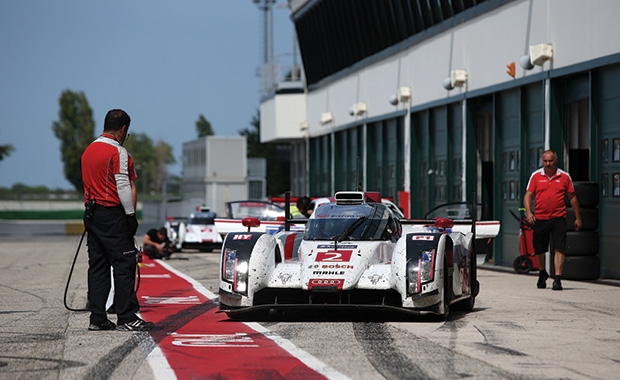 When Audi offered us a test in the actual R18 e-tron quattro that won Le Mans this year, we were delighted to accept. The Ingolstadt giant made a similar offer back in 2011 and on that occasion we invited Johnny Herbert to find out what had changed in the world of sports prototypes since his days as an R8 driver.

This time, instead of asking an old hand to take the wheel, we thought it would be more fitting to gift a golden opportunity to a young ace who would really want and need it.

Harry Tincknell made his Le Mans debut this June, in Jota Sport’s LMP2 Zytek. Incredibly, his performance – combined with those of fellow rising star Oliver Turvey and team owner Simon Dolan – delivered a fabulous class victory. Tincknell’s name is now very much on the map, and we hope his first taste of a thoroughbred LMP1 with Motor Sport will cement that growing reputation. 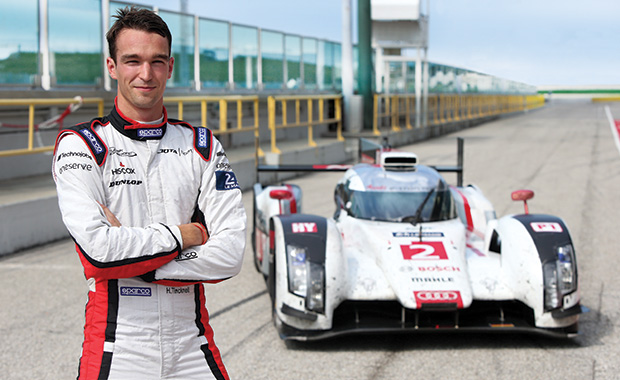 Beyond the Audi story, we pay tribute to the Trident – with a pictorial feast on Maserati’s first 100 years, while Adam Cooper offers some thoughts on his friend Jonathan Williams, who died recently. The knowledgeable readers of Motor Sport will recognise the Briton as the man who started just one Grand Prix for Ferrari, in Mexico back in 1967 – but as Adam’s story shows, there was so much more to him than that.

The same is true of Simon Taylor’s lunch guest, Kenny Bräck. The Swede is best known for winning the Indy 500 in 1999 and surviving one of the biggest accidents in history a few years later. But again, here is a fully-rounded character with a more interesting story to tell than race results or career stats can explain.

From the Renault Clio Cup to a Williams F1 drive, anyone? It can happen, apparently. Kenny will tell you how.