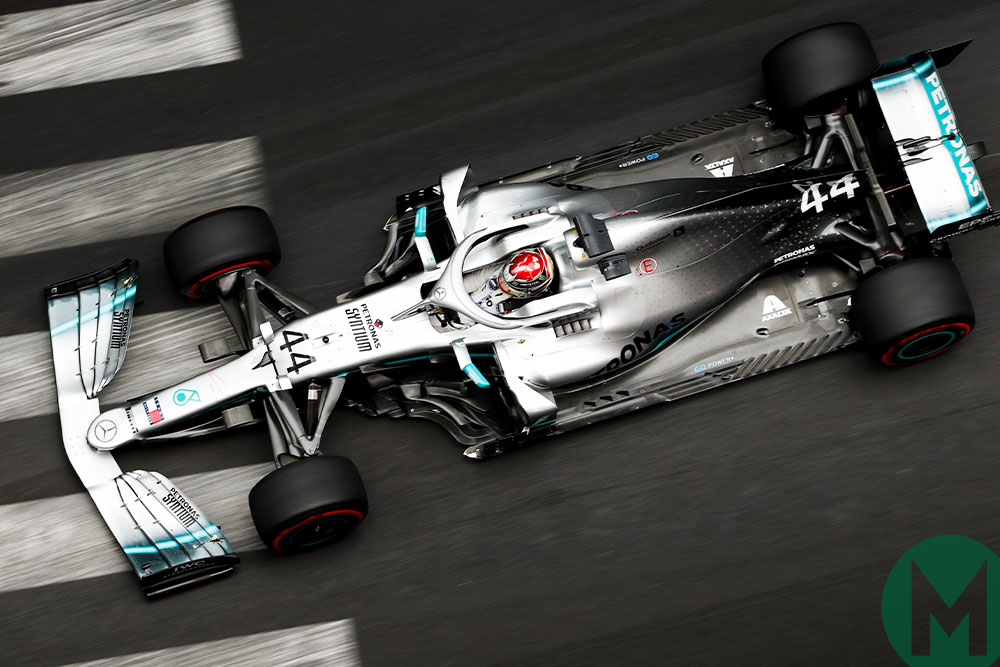 As the season develops and we see a bigger sample of patterns and evidence, it’s become very clear that the Mercedes team has done a quite amazing job of attending to the inherent difficulties of its long-favoured long wheelbase concept.

We’ve already addressed the clever rear suspension that simulates the effect of rear-wheel-steer, to help give a more instant yaw change. When it’s working properly, it’s very visually obvious how much of an advantage this confers: Lewis Hamilton or Valtteri Bottas will arrive at a slow corner, turn and in an instant the rear almost pivots around the outer front tyre, leaving the car pointing straight at the apex and allowing the steering lock to be taken off almost as soon as it’s been applied. In this attitude the front tyres aren’t being dragged on lock across the track surface – and the car is ready for the power to be applied far sooner than it otherwise would be. There were signs of it last year too, but it seems to be more consistently exploited on this year’s car. To see it working well is to see whole chunks of lap time over the field being bought and paid for right there.

But working in harmony with this feature is another one that’s new to Mercedes this year – but which was pioneered by Ferrari and subsequently taken up by Red Bull (last year) and which is now being developed by most of the other teams too. That is a front suspension linkage which, past a certain threshold of steering lock, levers the nose of the car down. In-car footage from Bottas at the Monaco hairpin showed it very clearly. Looking at the pivoted brackets on the suspension legs of both the Ferrari and Mercedes gives a pretty good clue of how, up to a certain point of steering, the suspension loads feed straight through that bracket to the wheel hub, in a conventional fashion. But once past that steering angle, the suspension leg forces the bracket to pivot downwards, effectively pulling the whole front of the car down.

This will not only counteract the understeer inherent to an F1 car – and especially a long wheelbase F1 car – in slow corners by mechanical means, there is also likely to be an aerodynamic benefit as the wing and nose begin to work in ground effect. Although most of the teams are now utilising this technology, it will be of particular benefit to a car with an inherent weakness in slow corners – such as a long wheelbase car.

So with two key bits of suspension technology, one at the front, one at the back, the slower response into slow corners that’s normally a key drawback of a long wheelbase car, has been not only ameliorated, but apparently overcome entirely: the long wheelbase Mercedes is now demonstrably the best into and through low corners. This is where its key advantage over the Ferrari lies.

Meantime, Mercedes has just completed an all-new IT system running through both Brackley and Brixworth – overseen by Geoff Willis – which will make clearer to everyone in each factory the areas to focus on to make the car faster in the spirit of inter-departmental co-operation. These are worrying developments for the competition.