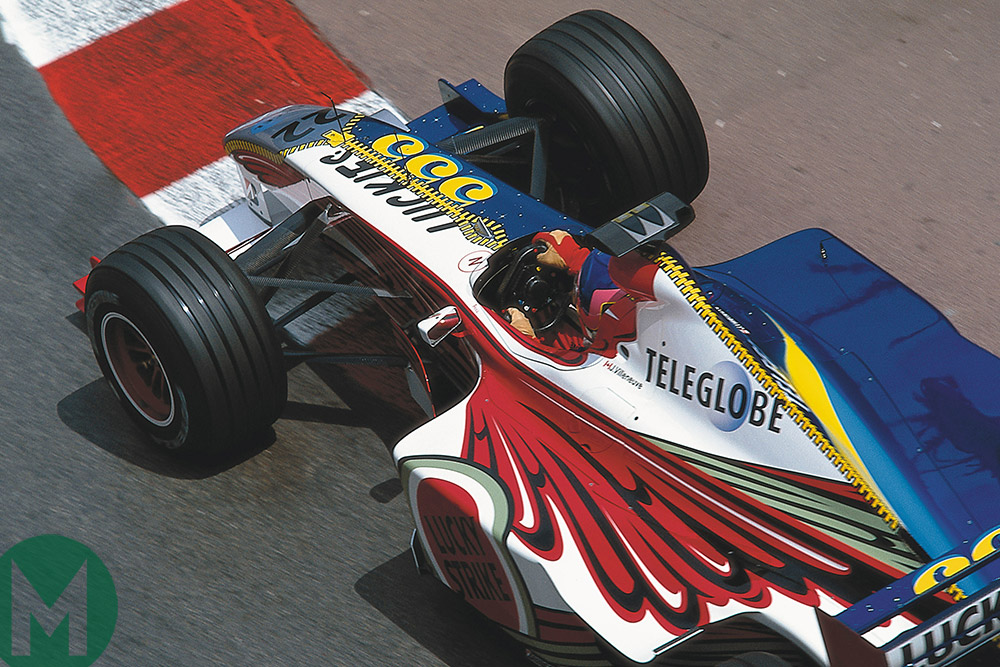 On the surface all was bluster. The new British American Racing team had launched amid claims that it could win its maiden Grand Prix, although the reality – in Albert Park, Melbourne, 1999 – translated to 11th on the grid for Jacques Villeneuve, 19th for Ricardo Zonta and a brace of retirements.

Beyond the hype, though, this was a team of solid pedigree, built around experienced personnel who had served their time in the relentlessly competitive maelstrom of European single-seater racing. Their commitment was absolute – and never was that more apparent than during a particularly testing weekend at Spa.

But first, a little context.

Twenty seasons ago Formula 1 had still to devise the concept of a summer recess. The world championship campaign had a reasonable sense of balance, with 16 races and breathing space in between: Australia in March, Brazil in April and then a (mostly) fortnightly routine from San Marino in early May through to Japan on October 31. Only Austria and Germany ran back to back, which was no geographical hardship, but things weren’t always quite as relaxed as that might sound. Having failed to come even remotely close to winning its first Grand Prix, BAR – founded with heavy-artillery tobacco money that had been used to buy out the Tyrrell Racing Organisation – arrived in Belgium, race 12, without so much as a point to its name. Villeneuve? He had yet to record a single race finish.

It soon became clear that the latest chapter was going to be no easier, following a succession of wishbone failures – traced to a manufacturing fault – during practice on Friday. Some uprated replacements were flown in from the UK, late in the evening, and the crew worked at the circuit overnight to make sure the cars would be fit for qualifying.

Which, briefly, they were.

The Canadian responded in kind, but his BAR 01 stepped out of line on the approach to Raidillon and spun into the right-hand tyre wall at huge speed, before coming to rest with all four of its freshly strengthened corners missing.

Alastair Gibson, chief mechanic: “Jock asked JV whether he was OK and he answered, ‘Yes, but it’s not flat.’ We were worried that wishbone failure might have caused the shunt, but Jacques insisted it was down to him. We had a spare car and he jumped straight in when he got back. It was quite hard for him to leave the pits, though, because he was surrounded by cameramen.”

Ron Meadows, factory manager: “I saw the accident on TV at home and thought I’d better go to work and organise some spares, just in case. As I walked past the TV again I saw what I thought was an action replay. Then I looked more closely and thought, ‘Hang on, that’s Ricardo Zonta’s helmet.’ The phone rang about five seconds later and someone said, ‘You’ll never guess what’s just happened’.”

Zonta had lost control at more or less the same spot, but crashed into the left-hand tyre wall before his car somersaulted and then pirouetted across the track.

Synge: “We never established what caused Ricardo’s accident. I think he was trying so hard to avoid what happened to Jacques that he glanced a kerb on the way in to the corner.”

Potential salvation was vaguely en route. The team’s test truck had already left Brackley HQ, with two cars on board ahead of a scheduled run at Monza, and a swift phone call diverted the cargo towards the Ardennes instead.

Gibson: “It was a job from hell to convert the car specs from Monza to Spa. We spent much of the night putting once beautiful parts into bin bags – I think we salvaged the drinks bottles, but that was about it – and you have to remember that everyone was already knackered after the previous night’s endeavours.”

And yet, when BAR raised its pit garage door on Sunday morning there were three raceable cars within.

Gibson: “That was probably the best moment in a very difficult season. We even received a round of applause from the other teams.”

The race passed relatively calmly – Villeneuve taking the chequered flag for the first time as a BAR driver, albeit a lowly 15th, and Zonta stopping after 14 laps with gearbox trouble – the aftermath less so.

Gibson: “After we’d packed up, I climbed into the minibus and realised my wallet was missing. I’d obviously dropped it but by that stage I didn’t care. I just wanted to get to Brussels Airport. By the time we reached Liège, everyone in the bus was asleep. I soon dropped off, too… but unfortunately, I was driving.”

He was awoken by the sound of their rented charabanc scraping along the central barrier of the E40 motorway. As he pulled over to check for damage, he found his wallet sticking out beneath the tailgate, with all cards present and correct.

Some good news at last, but they still missed their flight…