Spoilt by the cumulative successes of such as Jim Clark, Jackie Stewart, John Surtees and Graham Hill through the 1960s, British motor racing was in the market for a fresh talisman. Stewart had notched up a record-setting 27th grand prix victory at the Nürburgring in August 1973, en route to becoming the sport’s eighth British world champion in 12 seasons, but there had been nothing of that calibre since.

A lanky former Mini racer from Belmont, a village in Surrey’s stockbroker belt, James Hunt hadn’t been the most obvious candidate to fill the breach. He’d been quick through his career in junior single-seaters, but also a touch accident-prone. Following an acrimonious separation from the works March Formula 3 team in the first half of 1972, Hunt had agreed – following a meeting in the paddock at Chimay, Belgium – to continue in F3 at the wheel of an unfashionable Dastle Mk9, entered under the Hesketh Racing banner in deference to sponsorship provided by Alexander Fermor-Hesketh, 3rd Baron Hesketh. Towards the campaign’s end, Hunt impressed with a stirring drive to third place in the final round of the British F2 Championship at Oulton Park, his year-old March 712 beaten only the latest factory 722s of Ronnie Peterson and Niki Lauda. 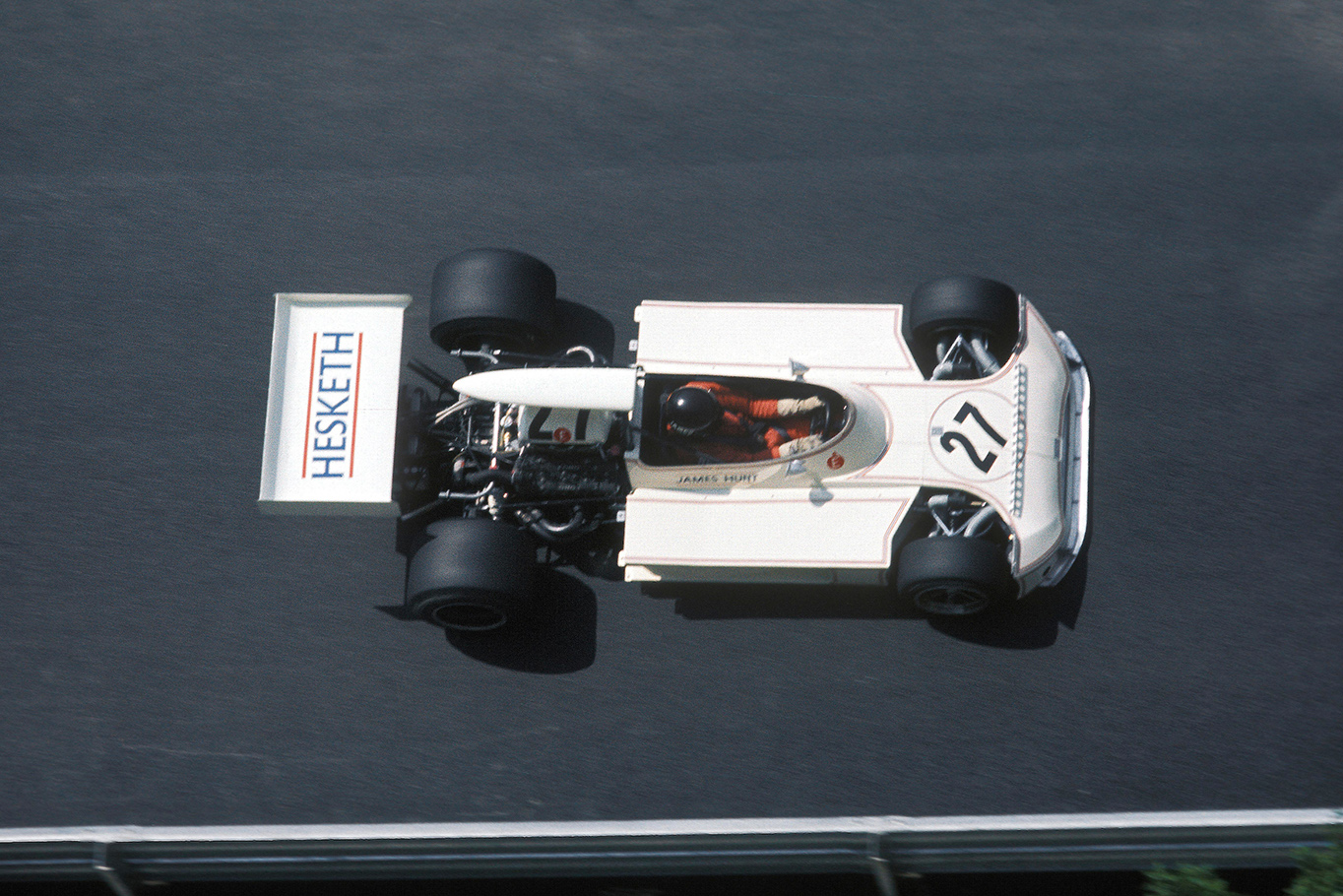 Hunt makes his World Championship debut at Monaco in 1973

For 1973 Hesketh originally intended to run Hunt in F2 at the wheel of a customer Surtees TS15 – and the programme started brightly, the Englishman running as high as third in the European Championship opener at Mallory Park before his suspension collapsed. He impressed again the following weekend, finishing third in the Race of Champions at Brands Hatch on his F1 debut, at the wheel of a hired Surtees TS9B. Two months later he would make his world championship bow in Monaco, scene of his messy F3 divorce just one year beforehand, at the wheel of Hesketh’s freshly acquired March 731. He finished ninth, precursor to an eye-catching run of results through the summer – sixth at Paul Ricard, fourth at Silverstone, third at Zandvoort – and a mature pursuit of winner Ronnie Peterson’s Lotus 72 in the seasonal finale at Watkins Glen.

To the wider world, Hesketh Racing appeared to be in motor racing to have fun – even in F2, its paddock enclave had been noted for its conspicuous consumption of champagne and caviar – but there was serious engineering talent at its core, spearheaded by Harvey Postlethwaite, and in Hunt it had found a driver of parallel ability and ambition.

For 1974 Postlethwaite developed the Hesketh 308, the team’s first eponymous F1 chassis. Hunt retired on its debut in the South African GP, but scored a resounding victory one weekend later in the non-championship International Trophy at Silverstone. It was achieved the hard way, too, the Englishman having dropped from pole position to the back of the pack due to an overheating, slipping clutch on the opening lap, before launching an impressive recovery. In subsequent world championship races, there would be ample promise and three third-place finishes, but no more. 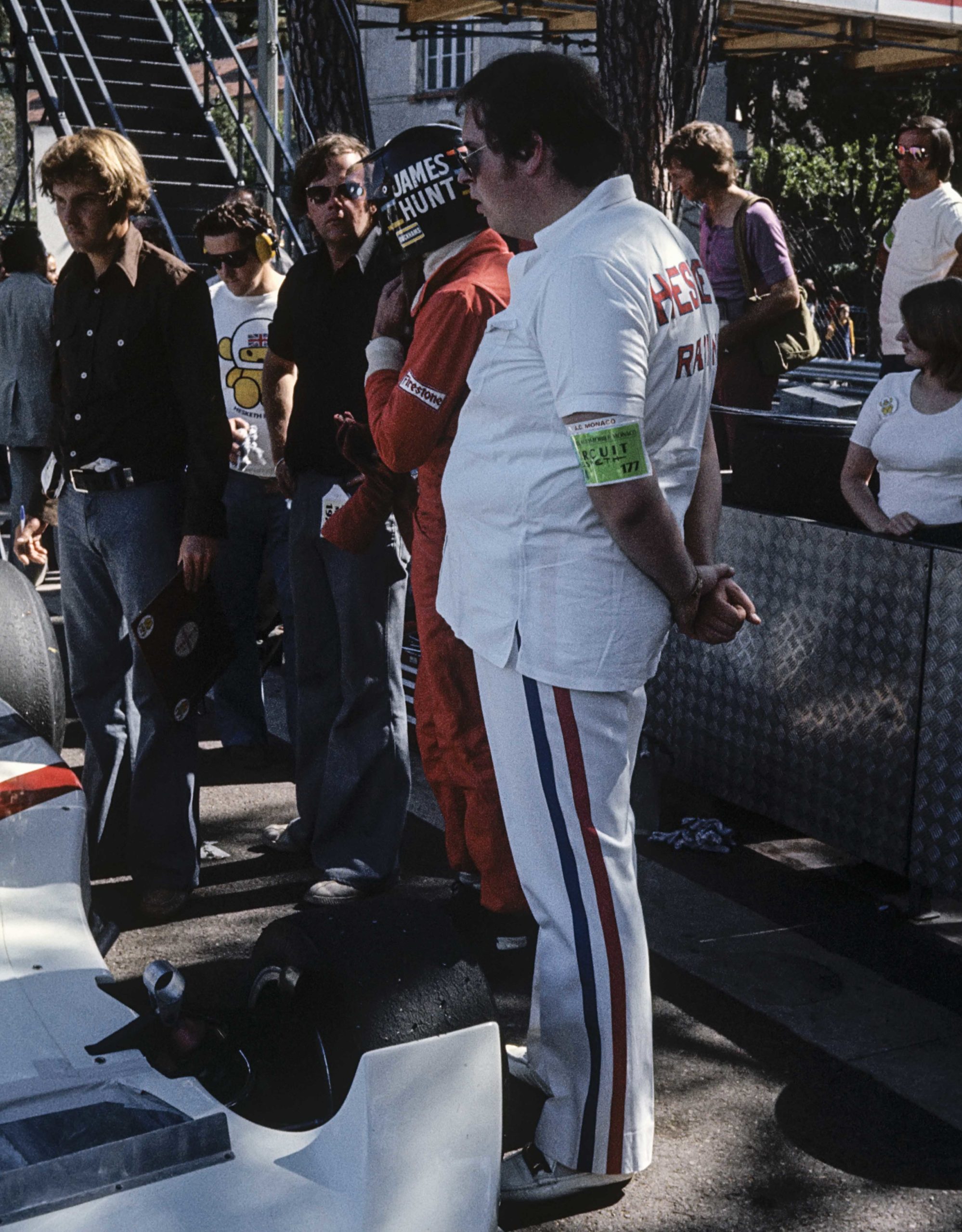 Lord Hesketh with Hunt, team manager Bubbles Horsley and Postlethwaite at Monaco in 1974

In the uprated 308B, Hunt began the following season on an encouraging note – leading in Argentina before running wide, and eventually having to settle for second behind Emerson Fittipaldi. He was sixth in Brazil, but that preceded a string of five straight retirements (though he had led in Spain, before sliding off on oil). He had also dominated the International Trophy, leading from pole until his engine blew. “The reason for that was rather unusual,” says Lord Hesketh. “James was so consistently quick through the original sweep at Woodcote, and it was such a long corner, that the oil came off the crank. I was amazed they could find that out and the guys at Cosworth said they’d never seen it before, but James was an absolute Woodcote maestro. He was one of two exceptional drivers I saw though there; the other was Jim Clark…”

Prior to F1’s arrival in Zandvoort for the Dutch GP, few had given the Cosworth-powered teams much chance. Ferrari had dominated in 1974 and, in the hands of Niki Lauda and Clay Regazzoni, its flat-12 312Ts were again expected to have the upper hand. They duly annexed the front row, with Hunt best of the rest ahead of Jody Scheckter’s Tyrrell.

“That weekend there hadn’t been a cloud in the sky through Friday or Saturday,” Hesketh says. “It was clear blue and blazing hot – perfect conditions. On Sunday morning, though, it rained remorselessly.” 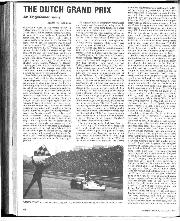 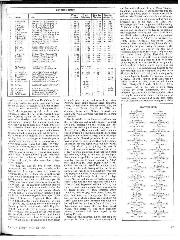 An Englishman wins Zandvoort, June 22nd Everyone went to the seaside circuit in Holland resigned to the fact that the Dutch Grand Prix would be another Ferrari walk-over. Memories of…

Local noise restrictions meant it wasn’t possible to run the then-traditional Sunday morning warm-up at Zandvoort, but the change in weather led to a delayed start and the organisation of a brief pre-race practice session so drivers could acclimatise.

Hesketh: “One problem for us was that our chief engineer Harvey Postlethewaite had returned home to work on our new 308C, which was due to begin testing in a few weeks. Our guys looked at the sky and the track and wondered what to do, but it was felt that trying to revise the set-up might be fraught with difficulty – and we could also see clear skies farther to the north, where the weather was coming from. Because Holland is by the North Sea, it’s just like being in Yorkshire or Norfolk. You could see a bright horizon, so we decided not to interfere with the car – especially as we didn’t have Harvey on hand. At Ferrari, I think Mauro Forghieri and his merry men added a bit of wing front and rear.”

What happened next, though, was a consequence of events during the most recent rain-affected race, in Monaco. “That was absolutely crucial,” Hesketh says. “James had a theory that the dry line on a mostly wet track offered more grip than people realised and we brought him in earlier than others for slicks that day, though we screwed up the stop and it took more than 20sec longer than it should have done. He consequently had to push pretty hard and eventually slid off into the barrier, but it was the first time he’d had chance to put his theory to the test – and he’d been lapping quickly. At Zandvoort, the rain had just about stopped by the time they did the warm-up lap, so we had the slicks out, ready in the pit lane.”

Lauda led away, with Scheckter vaulting to second ahead of Regazzoni and Hunt, but the latter was in the pits by lap seven, to take on a set of slicks. “Everyone else looked on in amazement,” Hesketh says, “but we were confident and, the key thing, so was James. There’s no point making a technically brilliant decision if the driver disagrees with it.”

After Ferrari pitted Lauda and Regazzoni on laps 13 and 14 respectively, Hunt led. 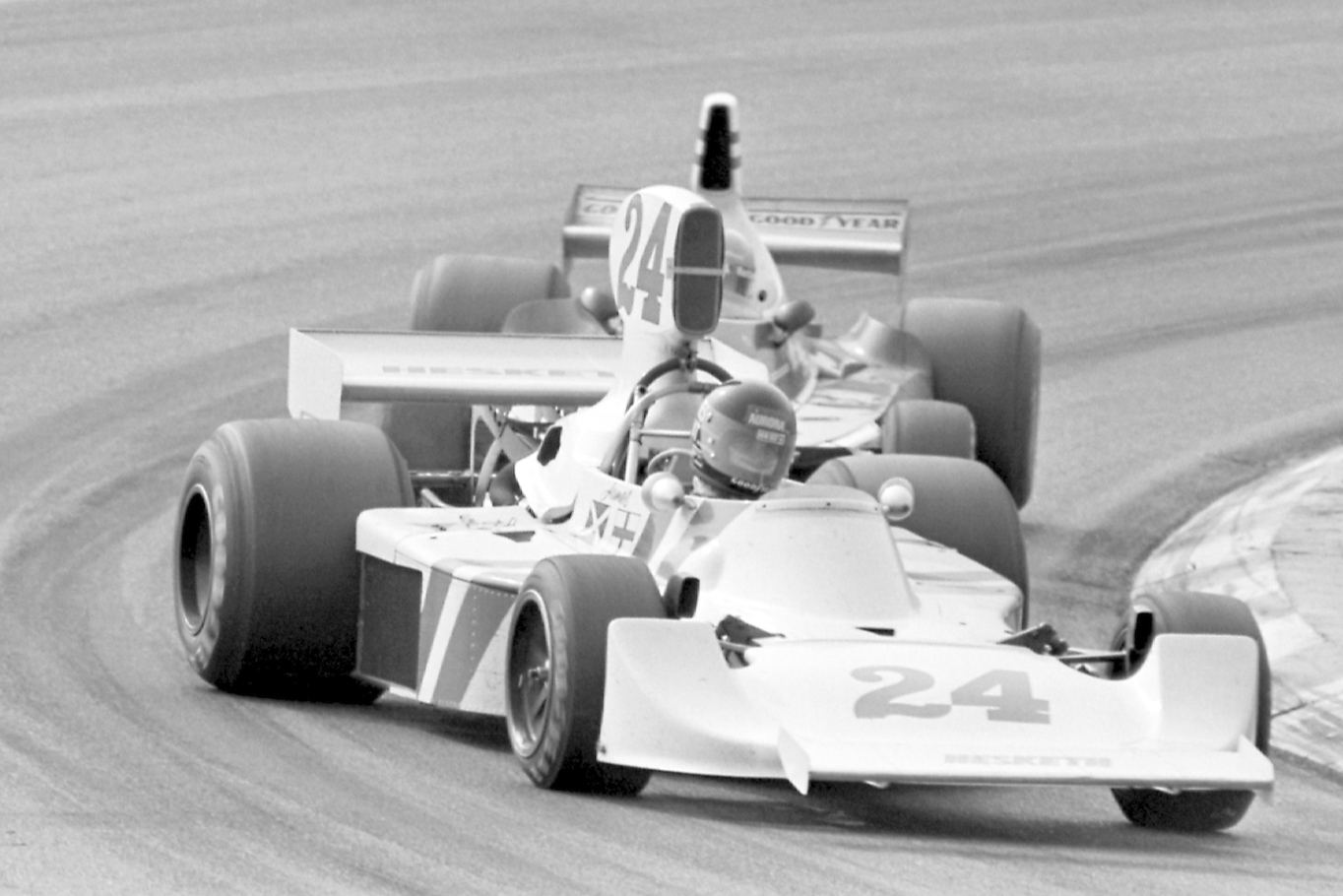 Hunt fends off Lauda in the closing stages of the race

“Once he was in front, the test was whether he’d be able to hold off the Ferraris to the end,” Hesketh says. “You have to remember that we had no TV monitors back then, so you couldn’t see what was going on, the commentary was in Dutch but inaudible anyway and there were no radios. The only time you saw the cars was when they passed the pits, but those at Zandvoort were towards the end of a very long straight – so we could watch them for a short while. At first there was just a white dot looming into view, followed by two quick red dots. Slowly, slowly we could see them getting closer and we were on tenterhooks wondering whether Niki would be able to challenge. Only during the final two laps did I get the impression that he’d decided he couldn’t make it. He hadn’t backed off, but I sensed he’d lost the belief that he could get through. The tension lasted a long time – and I wasn’t convinced we would win until the chequered flag came out. 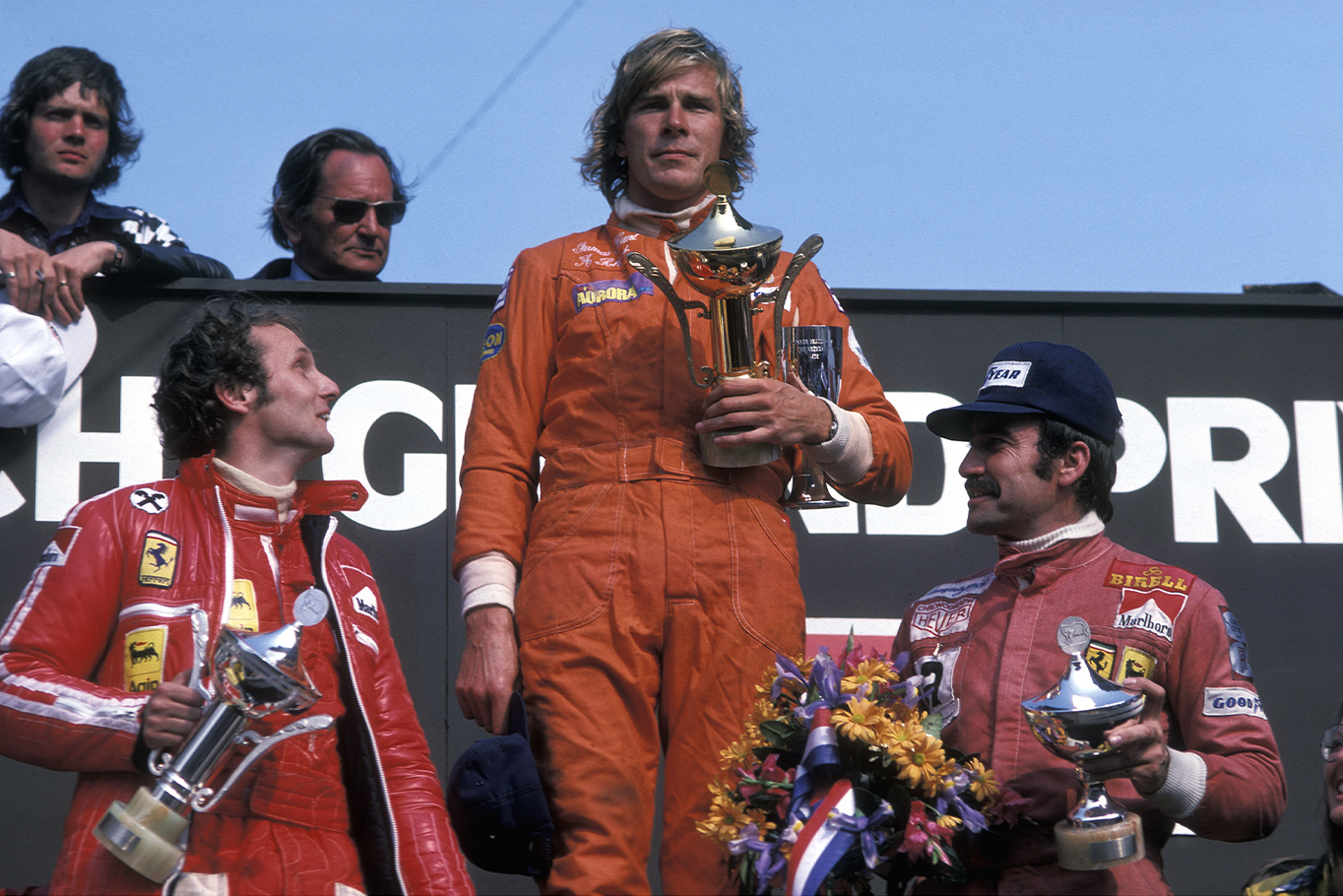 “It wasn’t the same as winning your first race, as we had at Silverstone the year before, but victory came as a relief because our lack of results had been driving us all towards a nervous breakdown. The real sensation of success came afterwards. Zandvoort is quite unusual, of course, because it is surrounded by dunes – and there were lots of little encampments scattered around, with people waving Union Jacks and Hesketh teddy bears [the team’s motif]. They didn’t all rush off to catch the ferry home but stayed on to celebrate. In a sense, going around the track afterwards was the best bit.”