While Goodwood’s Revival Meeting was for the 17th time reminding us of everything glorious that made our sport great, a vision for the future was being sparked into life on the other side of the world. 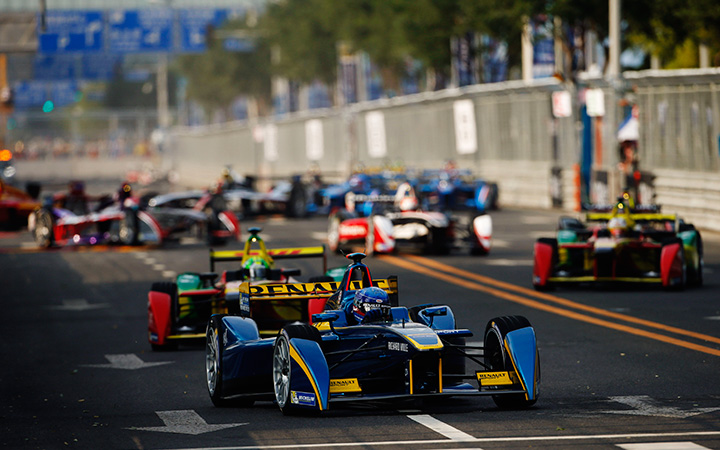 Except ‘Formula E’ is far from new. It’s 115 years old. One of motor sport’s formative rivalries was enacted by electric cars on a straight stretch of road northwest of Paris. It began in December 1898 when Comte Gaston de Chasseloup-Laubat, hunched over perhaps the first recorded steering wheel (as opposed to tiller), urged his 36bhp Jeantaud Duc through a one-way flying kilometre at 39.24mph. The nascent automobile industry was in the midst of a three-cornered power struggle between electric (lead-acid battery), petrol and steam. The Comte, who in 1897 had won a major event using a steam vehicle, now put electric’s nodes in front… …and Camille Jenatzy’s out of joint. 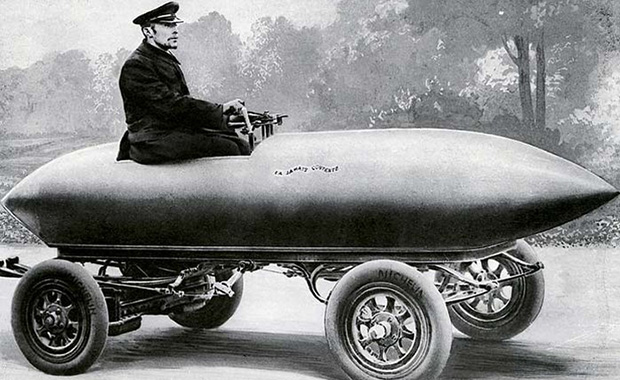 The Belgian, a clichéd fiery redhead, was from a family of innovators; his father was ‘into’ rubber long before it became the norm. A trained engineer, Jenatzy viewed the publicity of high speed as a method of grabbing a larger slice of Paris’ lucrative electric-traction scene. So, in January 1899, on the same road near Achères, his CGA Dogcart was timed at 41.42mph. A few minutes later, the Comte managed 43.70mph. Jenatzy responded within 10 days: with bigger batteries and 49.93mph. Already motor sport was forcing the pace. And now it got serious. Upon its next appearance, in March, the chain-drive Jeantaud featured rudimentary streamlining – a wedge nose rather than a bluff affair, plus a pointed tail – and the Comte, despite his jutting comically into that stream, achieved 57.65mph. 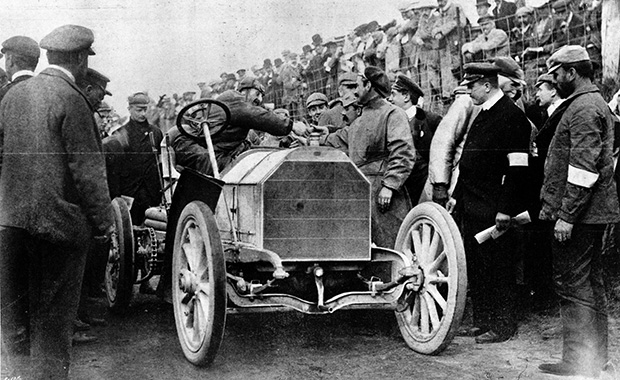 But the restless Jenatzy had a trick up the sleeve of his preferred fur coat: La Jamais Contente, the orginator of purpose-built Land Speed Record cars. Its rocket shape formed from sheets of partinium – an aluminium alloy that includes traces of copper, magnesium, tin and tungsten – this dramatic, teetering 1.5-tonne bolide was powered by two 25kW (34bhp each) direct-drive motors running at 200 volts and drawing 124 amps from Fulmen batteries. This power pack was boxed and mounted between the rear wheels. With Jenatzy at the tiller, it became on 29 April 1899 the first vehicle to exceed 100kph: precisely 105.87. Or 65.79mph. It would allegedly briefly achieve 120kph two days later. That’s a 47.5 per cent increase inside six months that included the Christmas and New Year break! Thereafter, petrol in the main steamed ahead. But it cannot do so indefinitely, apparently. E voilà! Formula E. 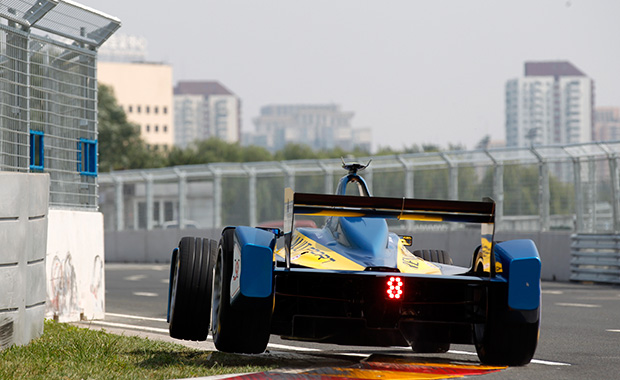 Its lack of noise and cautious verging on turgid formation lap – battery life was a sticking point in 1899, too – allowed me to enjoy a morning cuppa before settling down to a 25-lapper in Beijing that, bar mid-race car-swaps – I admit that the Benny Hill theme tune popped into my head – was like most other modern car races: the banging of wheels and rubbing of walls, bent suspensions, chicanes, lock-ups and several scrabbled overtakes, followed by post-race small print confusion when Daniel Abt was bumped from third to tenth place for using a fraction too much energy. Well, it is supposed to be precious.

Formula E has a lot on its plates (sic). If saving the planet isn’t enough, it must convince us to watch it as a purely competitive sport before it can begin to convince us that we want saving. (Bear in mind that the younger generation might be more readily persuadable.) That Nico Prost wanted desperately to be its first winner became abundantly clear at the last corner of the last lap. Having otherwise driven with the aplomb made famous by his famous father, and completed a car-swap accurate to the nearest allowed second, he displayed apparent Senna-esque ruthlessness. 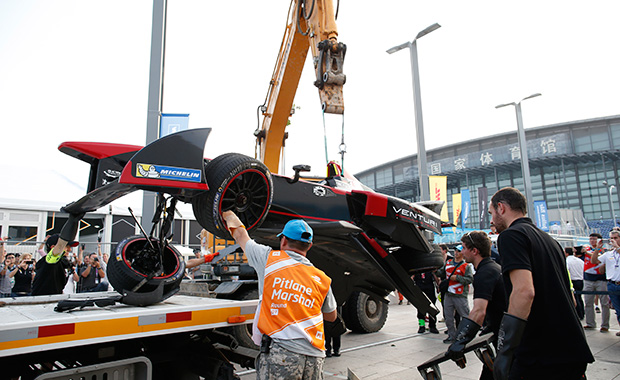 The rapidly closing Nick Heidfeld, Prost’s Rebellion Racing co-driver in the World Endurance Championship, was making a fair attempt at an inside pass when the Frenchman, having for some reason glanced in his offside mirror first, swerved left. His violent action wrought an ugly result. A sausage kerb did the rest, launching Heidfeld into a series of tumbles that brought him into upside-down contact with the top edge of the barrier. For a moment that silence was deathly. Thankfully, he did not strike home across the cockpit – and Dallara’s chassis did the rest. Boosted by adrenalin rather than by the fans – the three drivers voted most popular were awarded five seconds of 20 per cent extra power (to little effect on this occasion) – Heidfeld dashed across the track to remonstrate with Prost, who had vacated the crime scene – assault with a battery? – without a by your leave. 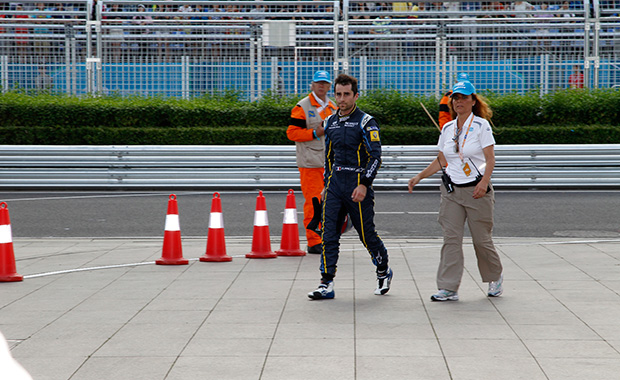 It looked as though their dispute would be settled the old-fashioned way, particularly as Prost had removed his crash helmet while Heidfeld had not, but the static fizzled and later was dissipated via the electronic media: Prost apologised and will receive a 10-place grid penalty at the next race. Working on the scrolling basis that no news is bad news, this was nigh on the perfect racing weekend for a debut formula. As I said: very ‘modern racing’. Of course, it wasn’t a patch on Goodwood, but still – whisper it – I quite enjoyed it. With 200kW (270bhp) in qualifying trim and 150kW (200bhp) for the race, the single-seaters were sufficiently powerful and the grid sufficiently evenly matched for drivers of the calibre and experience of Sébastien Buemi and Jarno Trulli to make costly mistakes, while the tight confines of the 2.2-mile track helped camouflage a shortfall in top speed. (An annoying man/thing/creation called EJ attempted to cover for the lack of noise.) 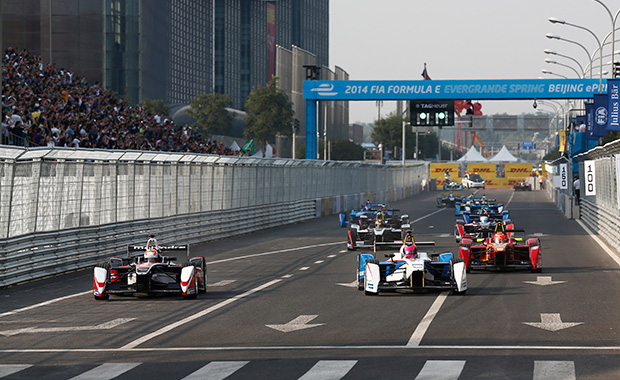 Formula E might not be the ultimate answer, but it is a brave step that must not be dismissed out of hand. It deserves our patience. Certainly the introduction of individualistic chassis’ in its second season will be a welcome addition to a series promoting hi-tech and innovation. My verdict, for now: sound foundation rather than silent revolution. I am, of course, listening as I write to audio of the BRM V16 – a car that initially was sufficiently unreliable as to become a laughing stock. And, let’s face it, iconic big-banger Can-Am assailed the senses without providing a slew of great races. One man’s noise…