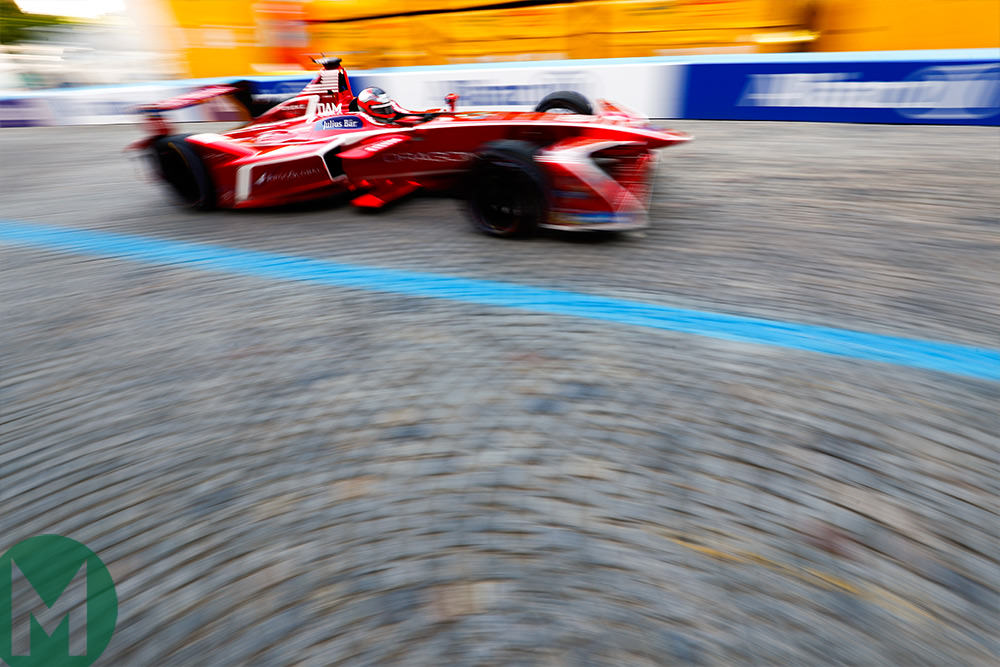 The Formula E Zürich ePrix broke a 64-year dry spell for international motor racing in Switzerland, and it did so in remarkable fashion.

The track, though a tight, technical and bumpy path that followed in the same vein as other FE circuits, overlooked Lake Zürich on one side and was shadowed by the financial offices of the Enge district on the other – and the whole event was executed with remarkable efficiency.

Bridges over the circuit – both for pedestrian and hospitality use – were makeshift wooden structures, as were the paddocks over the cobblestone-covered pitlane while the media centre was in the basement of an insurance company’s offices (the grandstand outside the media centre reserved solely for employees of the company as a result).

But beyond all of the fan service – a Mercedes/Smart electric car parade, the Audi e-tron Vision’s mosey around the track, an esports drive that pits gamers against FE drivers and other off-track activities – was this a big deal?

Well, the last time a Swiss circuit race took place was in the late 1980s, according to former Swiss Formula 1 driver Marc Surer – now a broadcaster and analyst. Surer raced an electric BMW 3-Series at the Interlaken airfield in a circuit race, which was generally neglected by the press. But more on that in a later issue of Motor Sport.

Regardless of when the last motor race in Switzerland was held, Surer was beaming at the prospect of motor sport returning to his country and called it an “immensely significant step for both Formula E and Switzerland.”

Compatriot Edoardo Mortara, who drives for the Venturi squad – for whom F1 veteran Felipe Massa will drive from the next season – was equally jubilant at Swiss motor racing’s revival.

“We’re doing something historically significant and it feels very nice to have it come back to Switzerland,” said Mortara.

Mortara, however, did notice some locals had been frustrated by road closures in the area.

“There have been some complaints and it’s not the first time we’ve raced in a city centre, but generally people have been in favour of events,” he said. “In FE you’ll have many people against the event but we just have to put on a good show.”

Most of the businesses in the area were closed, it being a Sunday, but hairdressers and sandwich shops stayed open and relished the prospect of increased footfall on the day itself. Road closures, in a city so well served by public transport, didn’t seem to take their toll as they would in London or next FE host New York City.

Praise continued to flow in. Mark Webber joined his fellow broadcaster Surer and called it a “huge coup for Formula E.” Webber, who currently presents Formula 1 on Channel 4 alongside David Coulthard, denied that he would turn to FE broadcasting when Coulthard’s production company loses its F1 contract at the end of this season.

Sam Bird, cover star of the July issue of Motor Sport, couldn’t play down its significance, either.

“I think it’s a huge event. Motor sport hasn’t been in this country for 64 years and imagine how well the technology has evolved since then for the Swiss people to change their view and perception of motor sport and welcome it onto their streets. It’s a big deal.

“If these were V12s, V8s or V6 engines they wouldn’t be racing here, so for us to be doing so is really great.”

In fact, detractors were few and far between after a gripping contest in the heart of the city. As for Formula E, it seems that those who scoffed at its inception (yours truly included) are being converted on a race-by-race basis.