In the days before the ‘winter sun’ of the Springbok and Tasman series’ of the 1950s-’60s, hardier European racing types rugged up and headed north to get their off-season fix.

The Swedish Winter Grand Prix of February 1947 saw three intrepid Brits cope with minus 24C for almost an hour in the open cockpits of their ERA voiturette single-seaters.

Reg Parnell, the winner at the wheel of R1A, George Abecassis and Leslie Brooke should have been joined by the likes of Raymond Sommer and Louis Chiron – but their Maserati and Talbot were still on a ship trapped by ice outside Gothenburg.

So another race was organised for a fortnight’s time.

The first had been run on a 2.17-mile circuit of hard-packed gravel, dirt, snow and ice at Römmehed airforce base. This second was to be held on a frozen lake near Vallentuna, north of Stockholm.

It had dipped to minus 30 by now, but those glutton-for-punishment Brits were back, their ERAs fitted with hillclimb-type twinned rear wheels.

A 3.1-mile circuit had been created by sweeping away the covering of snow and then rolling hot gravel into the ice. The resultant surface was said to surprisingly grippy.

Sommer led the early stages but slid off, unhelpfully packing his 4CL’s engine bay with snow, and so it was left to Parnell, dressed like Bomber Command crew, to score another win, averaging 67mph for more than 69 chilly minutes.

Competitive driving on ice in Sweden dated back to a 1906 reliability trial from Gothenburg to Stockholm.

In 1931, befitting new GP status, it was decided to adopt a circuit format – albeit a circuit like no other. Almost 30 miles in length, it wove through forests on narrow roads, crossed wooden bridges and swept across two frozen lakes.

A 40-minute lap did not make for the most compelling viewing and so cars had to tackle a 1.2-mile circuit at the start/finish on Lake Rämen – the original spectator stage? – before heading into the even wilder wilds.

German ace Rudolf Caracciola was the star attraction – the crowd was estimated at 40,000 – but his Mercedes-Benz SSK on problematic snow chains was no match for the few locals who were using and were used to studded tyres.

Karl ‘Kalle’ Ebb, a former Olympic middle-distance runner from Turku, Finland – he finished fifth in the 3000m Steeplechase in Paris 1924 – won the 240-mile event in a stripped 4.9-litre Auburn special.

He did so by almost 13 minutes despite having become stuck for a time. Swede Per Viktor Widengren, the race’s fastest in a Mercedes-Benz SSK, had no choice but to help his rival, for the road was blocked entirely.

The grateful Ebb waved his rescuer into the lead, only for Widengren to retire before half-distance because of a broken gearbox caused by an accident.

The 1932 edition was spoiled by warmish weather that caused the circuit to be strewn with puddles and become very rutted. Studs were beneficial still, but these conditions were not kind to them.

The surprise winner was Swede Sven-Olof ‘Olle’ Bennström, whose Ford special ran non-stop on tyres it had used since practice.

Ebb and Widengren, both now driving SSKs, had started as joint favourites. The former led but retired early because of a split fuel tank while the latter finished fourth after a stop to fix a leaking fuel cap and fit new spark plugs.

This same pair would dice again in 1933.

Widengren, whose family’s successful textile and clothing businesses in Vingåker, west of Stockholm, had enabled him to buy an Alfa Romeo 8C ‘Monza’, got the nod on this occasion.

Ebb, delayed initially by supercharger and transmission bothers, was catching the leader when he crashed when taking a drink of sugar water while on the move. He was knocked unconscious in the incident.

There was a Swedish Summer GP that year, too, won by Antonio Brivio in a Scuderia Ferrari-run 8C Monza. (The start money and prize fund must have been good for Enzo to send a car). 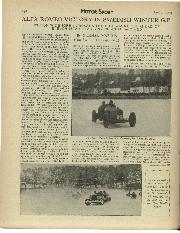 The Swedish Winter Grand Prix, held at Ramen, is the big motoring event of the year in Scandinavia, and every year is becoming more popular both with competitors and spectators…

Sadly the event was marred by a pile-up that claimed the life of a riding mechanic – and burned down a house! – and racing’s popularity in Sweden dipped as a result. Its Winter GP at Rämen would not be revived until 1936.

Bjørnstad would that year complete a Scandinavian hat trick by winning the Norwegian GP, held on frozen Lake Gjersjøen, and the Finnish GP, held in a park in Helsinki in balmy May.

In a bid to spread his wings – and perhaps catch a few warming rays! – for 1937 Bjørnstad bought ERA R1A and contested voiturette races in Turin and Naples, and at AVUS in Berlin. It is said that he drove it as though he were still on ice – a spectacular style that resulted in victory in Turin, ahead of the works Maserati 6CM of René Dreyfus, and a third place in Naples.

Clearly Bjørnstad was handy – but he had to call it a day after the long journey to New York to drive the uncompetitive Monza in that July’s Vanderbilt Cup resulted in a failed transmission rather than the prize money needed to save his failing business.

His perennial Scando rivals had also called it a day: Widengren, married with a growing family, retired after 1936; and Ebb stopped at the end of 1937.

Bjornstad sold his Alfa to Swedish engineer Tore Berg, who used it to win ice races in 1940. Twenty years later the car was rescued from being converted into an out-and-out ice racer. 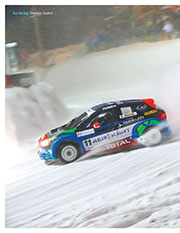 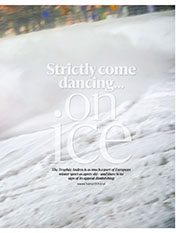 It’s difficult in our day and age of seven-figure values to get one’s head around the fact that such machinery would be treated so.

When Curt Lincoln, a former Finnish Davis Cup tennis player turned racing driver, ordered a Jaguar D-type from the factory, he asked that it be ‘roughed up’ so that he might avoid paying his country’s heavy import duty on new cars.

This was good preparation, too, as it turned out.

When chassis XKD530 returned to the UK in the mid-1960s, its bodywork was said to be barely recognisable so cut-and-shut had it been, mainly for ice racing purposes.

Hot-blooded racers, with ice in their veins, doing whatever it takes, whatever the weather.