Lewis Hamilton says the sport can and must do more to promote diversity within motor racing. The Mercedes driver also elaborated on a message he posted calling on people to begin speaking up against racism, saying everyone has a voice and can use it for change

Hamilton attracted controversy just over a month ago with an Instagram post many perceived to be aimed at other drivers in the sport who were not speaking up, though the Mercedes driver says that was not his intention.

In an interview posted by Daimler titled We Care We Do We Move, the six-time world champion explained his motivations behind pushing the message as well as Mercedes’ recent moves to promote equality for under-represented groups.

“Ultimately, people perceived that I was targeting drivers,” said Hamilton. “I really wasn’t. It was targeted at the whole industry. It’s been something I’ve been aware of for a long long time and not really seeing anyone doing anything about it.

“In today’s world where we all have a platform to utilise our voice, we all have these followings, our voices are very powerful. 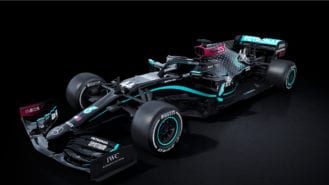 “If you’re not part of trying to encourage people to get out there and understand what the situation is, and why we’re in this situation, then for me that’s frustrating.

His message resulted in drivers such as Charles Leclerc, Lando Norris and Daniel Ricciardo responding and releasing their own messages of anti-racism. Formula 1 announced the formation of its We Race As One initiative in the weeks afterward.

Mercedes unveiled a new livery that the team will run throughout the 2020 season, changing its colour from silver to black for the year as well as running the words “End Racism” on the Halo along with F1’s We Race As One rainbow logos.

A statement was also released by the team acknowledging that it still has work to do in improving its inclusivity. Mercedes will implement a diversity and inclusion programme aimed at improving representation for under-represented groups within the team.

“It’s an incredible time in the world, there’s so many problems but one that has been really close to my heart has been on diversity and anti-racism,” Hamilton continued.

“It’s been great to see the response from people. That there is now a real positive movement and it’s happening globally, I think there are a lot of positives to take from it. 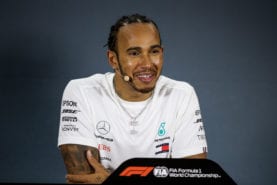 Lewis Hamilton has announced a new research body, dedicated to involving more young people from black backgrounds with motor sport. The Hamilton Commission, set up in partnership with the Royal…

“I’ve got a platform and I think it would be irresponsible for me not to utilise that and help educate people, educate myself and push for accountability with the brands and within the industry I work in.

“I’ve been in discussions with Toto [Wolff, Mercedes team principal] and everyone at the team and with the board members at Daimler to talk about our plan. How we need to educate ourselves and be a part of wanting to change and what we can do better within our team.

“What you are going to see at the first race is going to be a very very powerful moment for us.”

Hamilton has also announced a programme outside of his Mercedes team that will aim to provide students with black backgrounds better opportunity to study STEM subjects in a collaboration with the Royal Academy of Engineering.

“It is a very expensive sport and I think that’s definitely an underlying factor. The truth is the opportunity is not the same, not only from a driver’s point of view but from an engineers.

“That’s why I put together this commission to try and understand why that is the case. You can’t change what you don’t know and I think that’s the issue.

“There’s so many great opportunities and jobs within our sport but the opportunity is not the same for minorities to get through. That’s why I put together this commission.