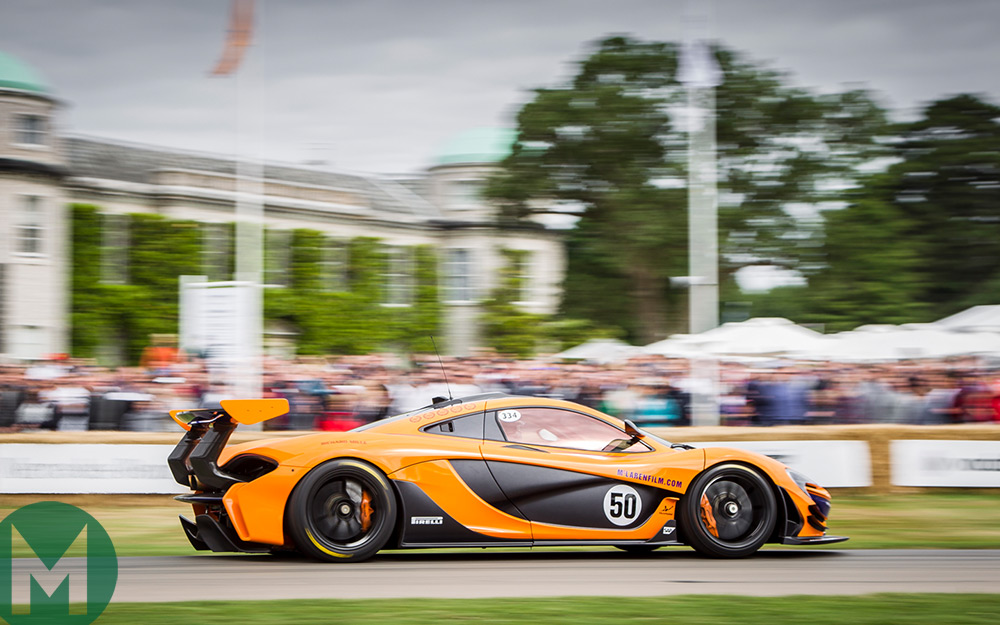 Speed is relative: 30mph past the school gates at chucking out time is criminally fast, 600mph at 35,000ft in a 747 seems really rather slow. I have driven a few cars at 200mph and not yet been frightened by the experiences, because they’ve always been on vast private facilities with lots of space in every direction, yet elsewhere I’ve scared myself witless at half that speed more times than I care to remember.

But I don’t think that the relativism of speed has been put into sharper perspective than when driving the McLaren P1 GTR at the Festival of Speed this weekend. Lucky boy that I am, I had driven it before at the Losail International Circuit in Qatar and had had enough wheel time for the folk at McLaren to trust I was prepared for the rather different challenge posed by Lord March’s front drive. I wasn’t so sure.

At Losail there’s so much space that when a very well-known racing driver flung it and me clean off the track at high speed during my introduction to the car, he just kept his foot in as we disappeared towards the desert, eventually rejoining the circuit still hooting with laughter. Try that at Goodwood and, well, you wouldn’t try that at Goodwood unless you had a spare £3 million (the going rate for lightly used P1 GTRs) tucked into your fireproof overalls.

With no chance to put any heat into the tyres, McLaren had sensibly put the car on a lightly used set of wets and after a brief re-introduction to the controls, simply sent me on my way. The P1 GTR has one thousand horsepower.

I did briefly toy with the idea of turning off the hybrid system and running up the hill on engine power alone, which would still have left 727bhp under my right boot and had I been given two runs, doubtless that’s what I’d have done. But with only one crack at it? I chose the full thousand and so, I hope, would you.

Can I say it was slightly disappointing at first? I’d disabled all the electronic safety nets and put the engine into its most aggressive mode, but it still just drove neatly away. I had the briefest of instants to wonder why this might be before everything went completely nuts.

Apparently the way the GTR deploys its power means it doesn’t give you everything for the first few tenths of a second when you leave the line. But you won’t miss it when it does. Suddenly the course seemed so narrow it felt like doing a full bore burn out inside a Channel Tunnel train. Lights. I remember lots of lights. Change up lights as it happens, but by now the car was very slightly sideways and I thought I’d better attend to that first, so the lights stayed on and the engine remained on its limiter for a little longer than planned. Then it was second gear and no more wheelspin, just magnificent, majestic, other-worldly thrust.

But you can’t really savour it because you’re already at the first corner. Will there be lots of grip, some grip or no grip at all? How can you tell? I’ve never driven the car here before, never driven it on wets before. So I’m pathetically cautious and discover that there’s actually plenty of grip.

There’s normally a straight past Goodwood House but not this time. I got a decent launch onto it and by the time I’d congratulated myself for this the car was already under bridge, jinking around on the bumps as Molecomb approached. I’m glad I didn’t know at the time how fast I was going because if I’d known then the GTR was already doing 120mph on this preposterously thin, curving, bumpy and treacherous piece of tarmac approaching one of the most difficult corners in motor sport I’d have needed to go and have a little lie down.

But the rest of the run was enormously entertaining. I’m always surprised at how quickly such an alien experience can come to feeling somehow manageable, if never close to normal. Most of all I remember pushing on through the last left hand curve, which is monstrously fast but not an otherwise inherently difficult corner, and rocketing past the finish at 130mph.

And then the best bit: knowing you and the car are safe, you’ve not broken anything and while you have most definitely not gone fast by Kenny Bräck standards, nor have you made a complete twit of yourself in front of tens of thousands of people.

Before I did it, trying to deploy 1000bhp on a narrow English country lane seemed like one of the maddest capers of my life to date. Having done it, it doesn’t seem mad at all, just utterly exhilarating. And right now there’s not much I wouldn’t consider for the chance to do so again.