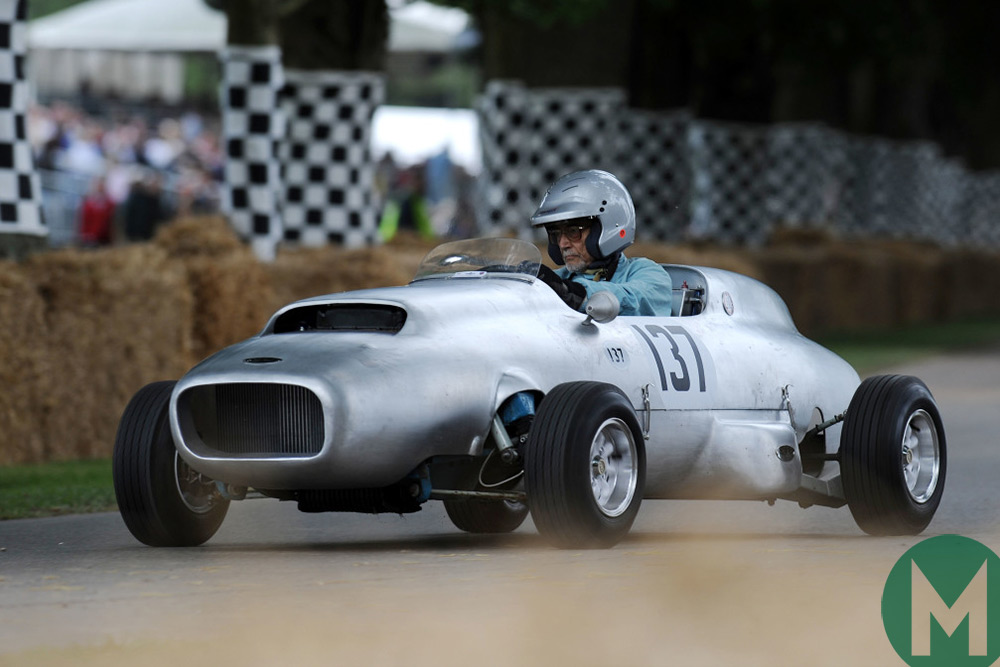 One of the more experimental projects of former Morgan engineer Chris Lawrence is heading to auction down under as part of Lloyds Auctions’ European Classics sale.

The Deep Sanderson DS105 ‘Twinny’ was initially designed and built for cyclist Reg Harris in 1963, making use of two 1071cc Mini Cooper engines – one at either end. The project was intended for Downton Engineering, only for contractual issues to get in the way and the DS105 to land at Lawrencetune’s door.

It was Le Mans class winner Lawrence who eventually gave the car its competitive bow at Brands Hatch’s Boxing Day meeting in 1963 because Harris pulled out of the deal for the car.

‘Unfortunately,’ wrote Lawrence in his autobiography, ‘the car was still unpainted and looked pretty awful at Brands and only went well in fits and starts mainly due to an error I had made in the cooling water circuit.

‘It was, however, in much better shape for an Easter Monday Mallory Park Formula Libre race, which means anything goes. Not only had the cooling problem been sorted, but an interesting new linkage had been added. That linkage allowed me, the driver, to control the way the two engines were balanced; or perhaps I should say it allowed me to introduce an imbalance when required. For example, on the approach to the hairpin at Mallory I could set the throttle linkages so that the rear engine came in before the front one, which helped me to get the tail out for the tight corner. Alternatively, on the approach to Gerrards, which is a long right-hand sweeper, I could reverse the procedure and bring the front engine in first, and cause gentle understeer allowing me to barrel round Gerrards flat out all the way. Huge fun. I can remember just hooting with laughter inside my crash hat all the way round.’

John Pearce ‘helped himself to the car’, according to Lawrence while he was contesting Le Mans, and once retrieved entries into straight line events such as Sydney Allard’s British Drag Festival followed, including a notable mention in the November 1964 issue of Motor Sport.

Lawrence later made his Formula 1 debut with J.A.Pearce Engineering’s Cooper T73-Ferrari, finishing 11th at Brands Hatch in 1966 and retiring from the German Grand Prix. He later finished fifth – and last – at the Gold Cup in 1966, and seventh at the following year’s Race of Champions.

Roll the clock forward four decades and Lawrence and the Twinny were reunited, the car painstakingly restored and a public return was made at the Goodwood Festival of Speed in 2008.

The ‘Twinny’ will be sold during the Lloyds Auction on May 27, with bidding open online now. At the time of writing, the unique piece of British racing history stands at just $3,700.