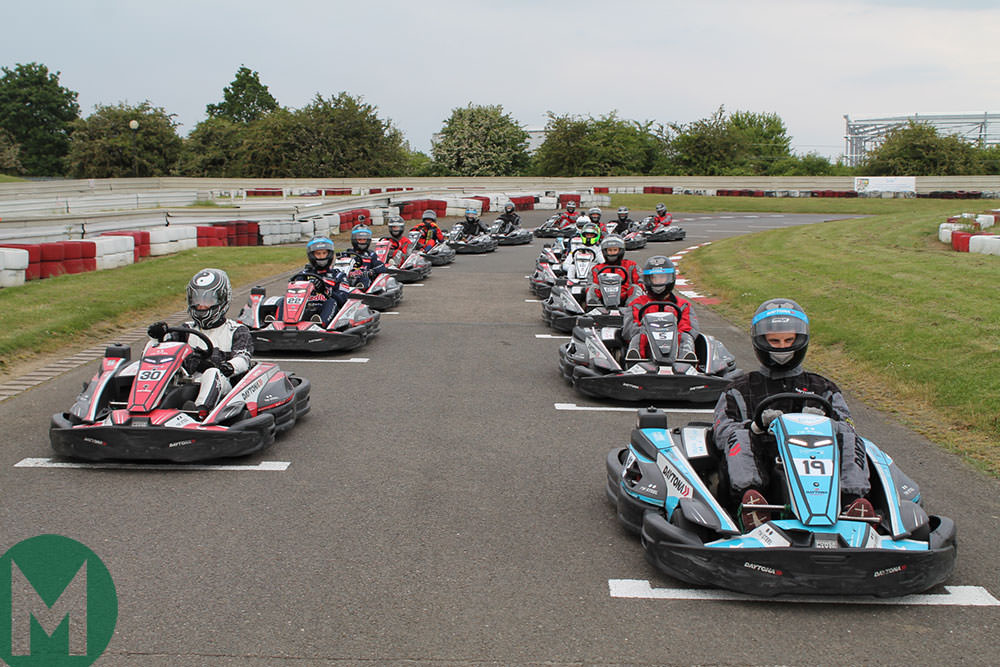 World Rallycross drivers may be used to hurtling cars sideways through dirt, gravel, and over jumps, but when it comes to go-karting they turn out to be dab hands.

When an invite to kart against the stars of this weekend’s WRX round at Silverstone lands in your inbox, you jump at the chance to don a helmet and gloves and head off to Daytona’s Milton Keynes venue. To see if there was something to be learned, of course…

“It’s a technical track, it’s not easy and in karts like these some corners are especially tricky,” he says before we climb into our seats.

Even armed with that invaluable advice, my boots began to quake, a pulse began to rise when it became clear that the line-up of drivers I’d be competing against was a group of hardened veterans – Loeb, Scott Speed and Tanner Foust – and drivers with rapidly rising stocks such as RX2 contender Guillaume De Ridder, WRX supercar pair Kevin and Timmy Hansen and former Caterham/HRT Formula 1 test driver Ma Qinghua.

Gracious competitor that I am, I hung around at the back of the pack, complying steadfastly with blue flags and allowing the likes of Loeb, Speed and De Ridder to lap me without incident. An ‘L plate’ was the wooden spoon award.

Post-race, Foust was the first to offer his guidance – and brush aside my weight concerns.

“I’m not saying you’re slow,” he says. “But all slow guys complain about their weight.

“How fast were you up the hill? I think you were going at a normal speed. Maybe you’re a bit slower because you’re tall…”

Foust, who was part of the now-defunct Global Rallycross Championship, is emigrating to the Americas Rallycross Series along with Speed, which launches at Silverstone this weekend.

Volkswagen Andretti Rallycross team-mate Speed calls it a “weird transition period for everybody concerned,” but adds that he’s “looking forward to what the FIA can bring to rallycross in America” with its new ARX competition.

And, the former Toro Rosso F1 driver and Red Bull F1 tester had his own views on my backmarker pace.

“It just takes time, mate. Sure, weight does matter, but not a tonne. I’ve been doing this since I was 10. Like anything, you need to find someone who’s really good at it, and then do what they do. It’s not rocket science.”

Eventual winner De Ridder, who beat Speed by 1.805sec at the finish, let me in on his secret.

“The secret is not to slide. Each time you slide you lose time – maybe that’s the main problem. Brake a bit earlier, try not to carry too much speed into corners to avoid the slides, and then get on the throttle as soon as possible.

“I did around 10 years of world championship karting. The main thing you carry over from karting into racing is the feeling of avoiding slides. It’s about sliding a little bit, but carrying as much speed going through the corner.”

But how does it feel for an RX2 driver to beat some of the biggest names in rallycross?

“There were a lot of well-known drivers here such as Loeb, and Speed who was ex-F1. You don’t have that chance often. To beat them is an incredible feeling. I’m aiming to beat them in WRX in the future, but first of all I want to win the RX2 championship,” he added.

And most importantly, what did I learn?

Firstly: don’t slide too much, no matter how much fun it is. Secondly, start karting at the age of 10, and lastly, don’t use my leftover Christmas weight as an excuse.

Especially not in May…