A new Queen settling in; no more rationing; and Bill Haley and his Comets had recorded Rock Around the Clock – although its global impact had yet to be felt.

Yep, fun was coming to town.

British motor sport was bubbling. Oulton Park and Aintree had joined the converted bomber bases on its packed roster. And Cooper and Lotus were battling the likes of Elva and Lola for a share in its burgeoning, innovative, market.

Jaguar had won Le Mans and Ferrari’s Mike Hawthorn had won a world championship Grand Prix. And Stirling Moss had just been confirmed as Juan Fangio’s Mercedes-Benz team-mate for 1955.

Brands Hatch had caught the mood by expanding lengthways – via its Druids loop – as well as widthways, and had employed a go-ahead PR man.

John Webb was always open to new ideas. Even a throwaway remark was clung to.

At a function for Silver City Airways, his main client, he was shooting the breeze with the editor of Motor, Christopher Jennings, when something Webb said prompted this response: “I suppose the next thing you’ll be running is a meeting on Boxing Day.”

Though said in jest, it came true.

The suggestion made a lot of sense in fact. Not only would it fill a gaping hole in UK’s motor sport calendar but also it would taking the boring out of Boxing Day.

After a swift check of meteorological records, Webb persuaded circuit MD John Hall to buy an ox, “roast it whole for 24 hours and sell it for 5d a slice” while the BRSCC ran a diverse seven-race meeting.

The weather was kind and 15,000 spectators attended. Campanological carols were piped interminably over the PA. And Moss dressed as Santa Claus to drop the flag at the start the Christmas Trophy.

Among the winners that day – as were several subsequently, the meeting was actually held on December 27 – were Tony Crook (the Albatross Trophy!), Don Beauman (despite a spin in his Connaught) and Ivor Bueb.

Its most memorable results, however, were the second places for Stuart Lewis-Evans, who recovered from stalling his 500cc Cooper at the start, and David Blakley.

From the Archive: Denis Jenkinson reports from the first Boxing Day meeting at Brands Hatch

The latter’s bulbous Emperor – a tubular-chassis sportscar that utilised Volkswagen trailing-link front suspension, a de Dion rear end and a HRG/Singer engine – was roundly beaten on its debut in the Kent Cup by John Coombs‘ Lotus-Connaught.

Its womanising, public school-educated driver would soon become famous, however, as the murder victim of Ruth Ellis, the last woman executed in the United Kingdom.

Motor Sport’s Denis Jenkinson hoped that winter racing would not become a “full-time thing”, opining that it would adversely impact the design, build and development of next year’s British challengers.

It had the opposite effect and became a mobile showcase.

The 1955 meeting attracted a crowd of more than 30,000, many of whom sat in their cars on South Bank rather than brave the chill damp.

Duncan Hamilton’s Santa arrived by helicopter (despite fog) and with a flask on his hip.

Lotus founder Colin Chapman scored a victory, as did Colin Davis and Don Parker, and the irrepressible Archie Scott-Brown made a winning debut in a GP car, the very Connaught that Tony Brooks had used to win that year’s Syracuse GP.

Following its 1956 cancellation – because of the Suez Crisis rather than snow – the 1957 meeting was held in good conditions and marked by wins for Mike Costin, Tommy Sopwith and Graham Hill.

Its Formule Libre main event provided a victory for Jack Brabham in Rob Walker’s Cooper, its Climax ‘four’ recently stretched to 1960cc. The car was immediately crated and freighted to Argentina, where an inspired Moss used it to stand GP racing on its head by defeating Ferrari and Maserati.

From the Archive: Bill Boddy reports from the Brands Hatch Boxing Day meeting in 1957

In 1958, Hill added two more wins in Lotuses and Chapman narrowly defeated a sister Elite driven by a shy farmer’s boy from the Scottish Borders.

It was all coming together – not that Jim Clark knew it.

For his was a disastrous 1959 Boxing Day Brands. Confidence dented by the first crash of his career – he admitted to losing concentration having conceded victory to Graham Warner’s Elite – he struggled in the latter’s cramped Gemini-BMC on the occasion of his single-seater debut.

Alongside him on the grid for this, Britain’s first Formula Junior race of note, lay his future: Chapman’s first rear-engine racer. It, too, struggled, its handling poor due to a lack of testing and its late-replacement Ford engine down on power.

Elvas (using thee-cylinder DKW two-stroke power) and a Lola held sway over the wayward 18 – plus the heavy Coopers – that day, but it wouldn’t take long for Lotus, engine-builder Cosworth, Chapman and Clark to combine to put their house in order.

The temperate lure of Springbok – especially when the South African GP was awarded world championship status in 1962 – Tasman and Temporada races began to chip away at Boxing Day Brands, the resultant lack of big names conspiring against it.

Hill’s absence in particular was strongly felt, for his larger-than-life public persona suited it perfectly. By way of a stunt he had demonstrated a motorised bathtub – a 1927 cast-iron roll-top powered by a scooter engine – for a record crowd in 1959.

Although Brabham undertook Santa duties in the 1960s, as did enthusiastic club racer John Mew, whose car also wore reindeer antlers, it just wasn’t the same.

Neither did it help when in 1957 professional football rescheduled its festive programme to include Boxing Day rather than Christmas Day.

The weather took a turn for the worse, too. The last two races of 1962, one of which was for journalists in identical Cortinas, were held in a worsening snowstorm, and the 1964 event had to be postponed entirely.

In front of an increasingly hardcore audience, F3 young guns helped guide the meeting through that decade and through into the early 1970s: Piers Courage, Derek Bell, Roy Pike, Bob Evans, David Purley and Tony Brise all carved that particular notch. 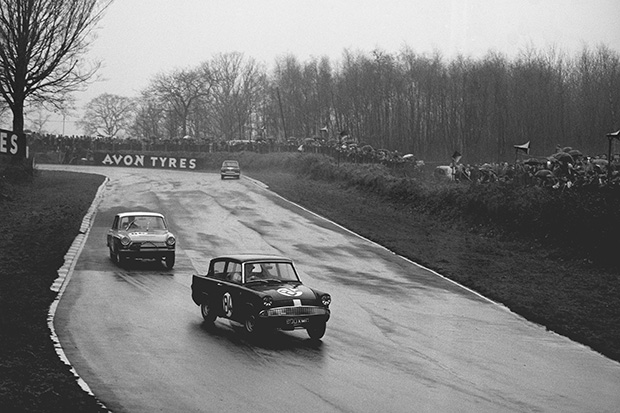 “In the 1950s the Brands racing season ran from roughly Easter to the end of September,” says Webb. “My airline experience taught me the economic desirability of high utilisation, resulting in an extension of the calendar from early February to mid-December. This destroyed the uniqueness of Boxing Day.”